Planning a trip to New York? There’s no filter needed on these picture perfect accommodation choices.

For Cityscape Views: The Standard Highline 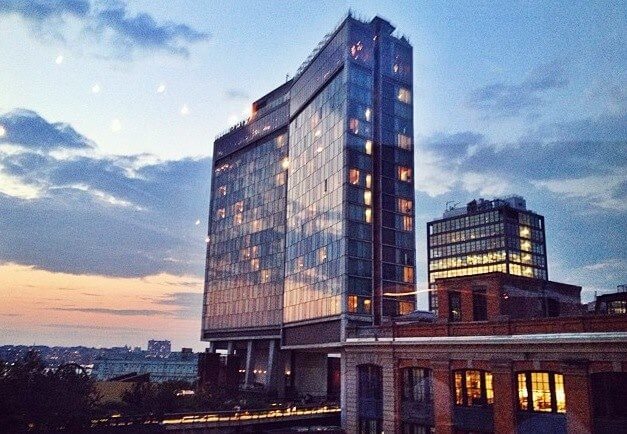 Set in the fashionable Meatpacking District, every room at the 18-storey Standard has spectacular views of the New York skyline thanks to floor-to-ceiling wall-to-wall windows (even in the shower, ooh-er-missus). Those in the know ask for a corner room when booking, for sweeping views across two aspects – we could spot the Empire State Building on one side and the Statue of Liberty on the other. It’s worth staying in to watch the sunset in the comfort of your room (with a drink in hand, of course) as the city becomes a mass of twinkling lights. 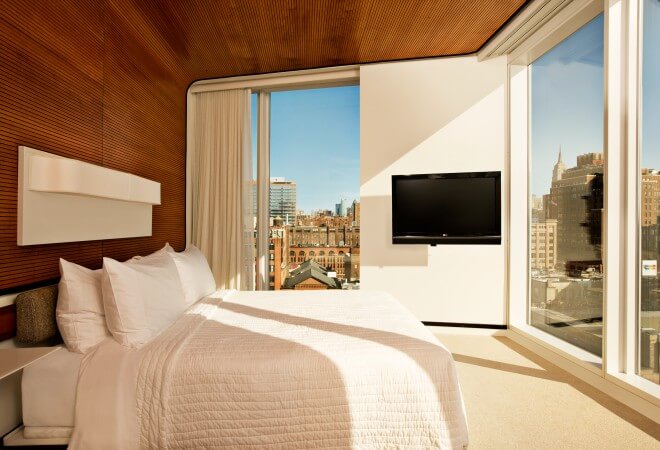 It’s not just the views that make the Standard a good bet though. As you’d expect from a Mr & Mrs Smith hotel, there’s plenty of attention to detail. From the neutral, modern interiors which feature large mirrors to let the views do the talking, to the plush on-site restaurant, The Standard Grill, which offers fresh oysters, cocktails and charcuterie, to the flattering mood lighting and iPod ready stereos, everything feels (and looks) pretty special. Dress up for a trip to the aptly named Top Of The Standard for brunch, live jazz and late nights. 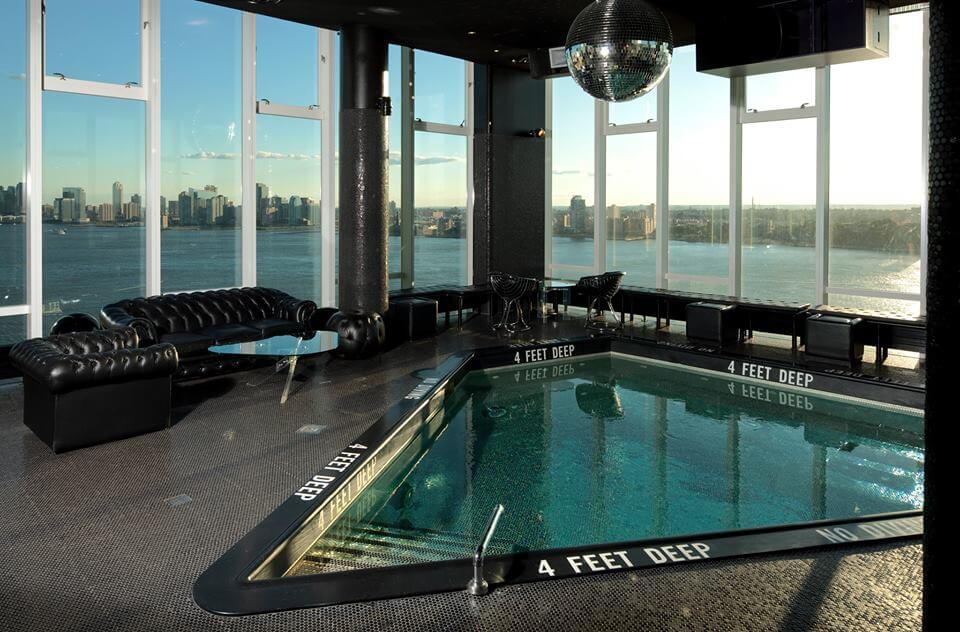 Nearby attractions include Chelsea Market (New York’s answer to Borough) an indoor gourmet mecca serving seafood, fro-yo and everything in between. Don’t miss a trip to the actual High Line either: this 1.45mile park is built on an elevated section of disused railway line and the hotel’s a few minutes walk away.

Photo opportunity: Sitting on your bed, pensively looking out at the city skyline. #Casual.

For Location: The Trump SoHo 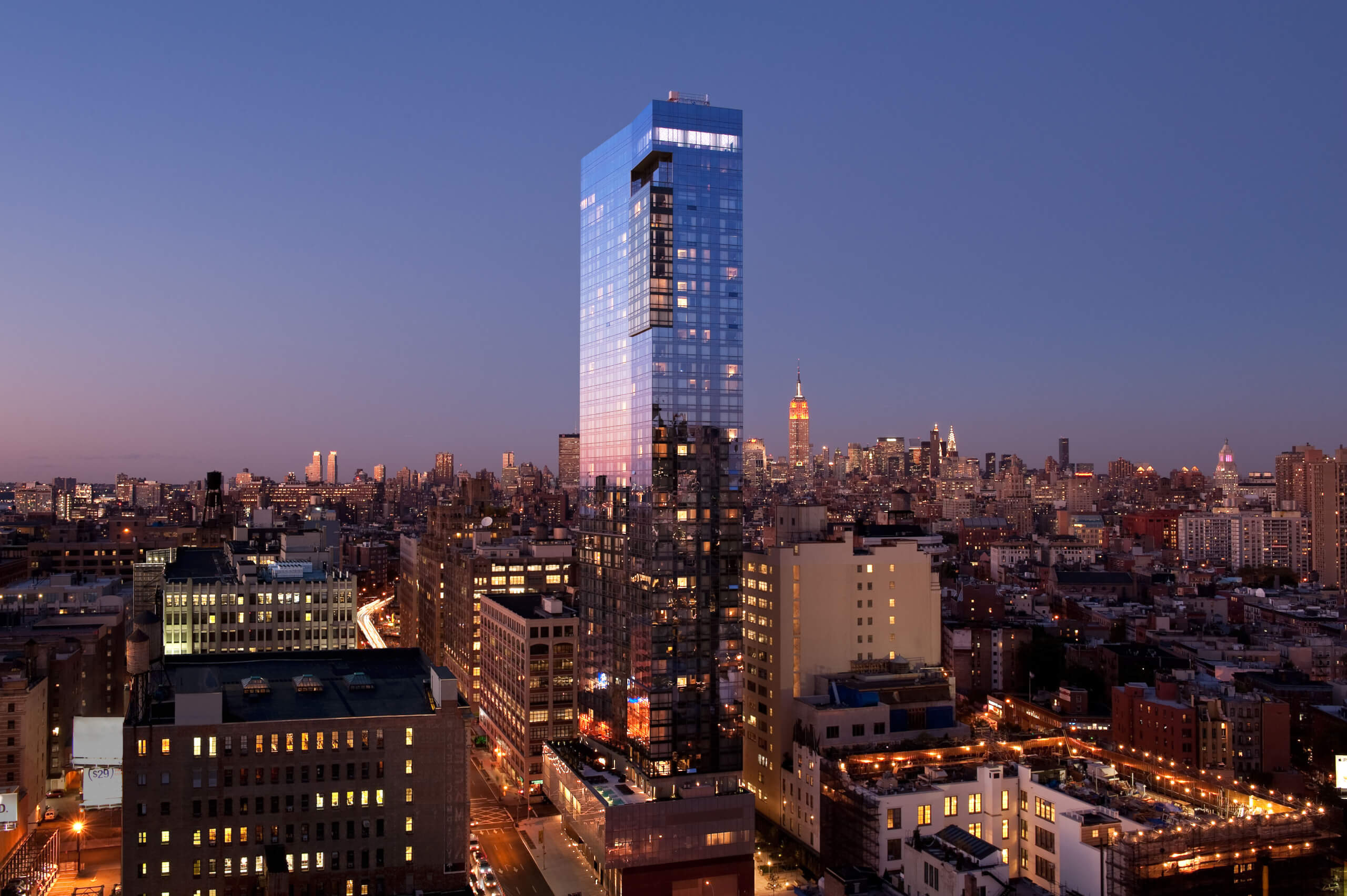 With Chris Martin and Daniel Radcliffe as neighbours, you’ll be in good company during your stay at The Trump SoHO. Sitting on the edge of SoHo – where TriBeca meets the West Village – the compact neighbourhood has everything on tap: bars, shops and restaurants. The cobbled streets are home to myriad designer shops (Etro, Herve Leger, Mulberry) plus a high street to rival the rest of the city. 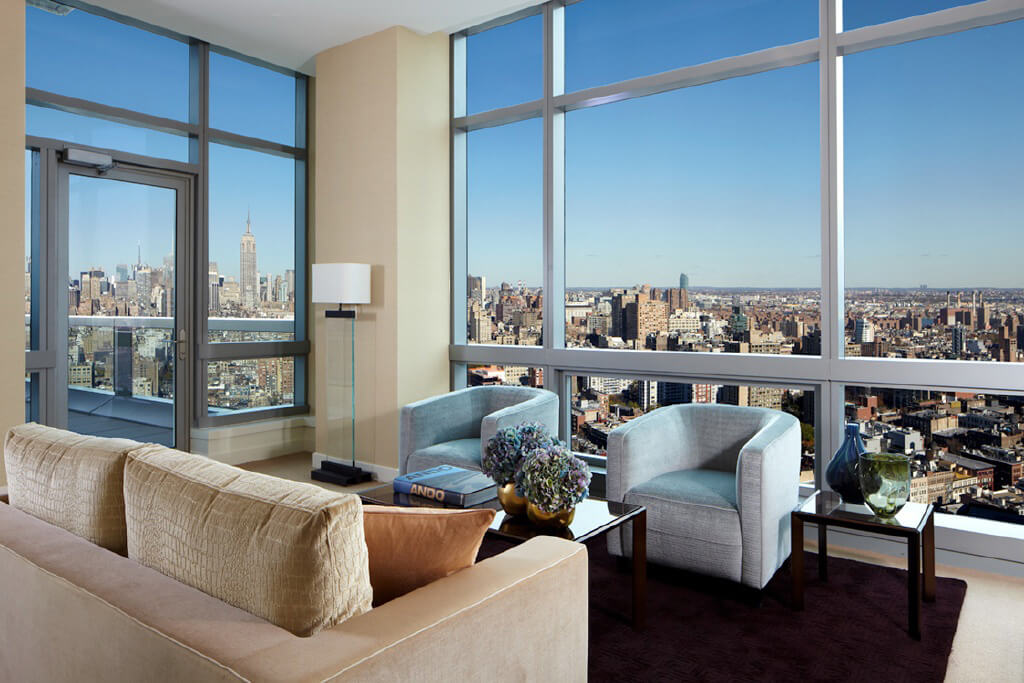 But there’s more to the Trump than the location. The 46-storey building offers sweeping city views with floor-to-ceiling windows  – on a clear day, we could see straight down Avenue of the Americas all the way to Central Park. (Tip: ask for a room on the 20th floor or above for the best views). The marble bathrooms with walk-in showers AND bathtubs (with city views) are probably bigger than your entire flat. In a city famed for being stingy over space, the Trump really stands out. 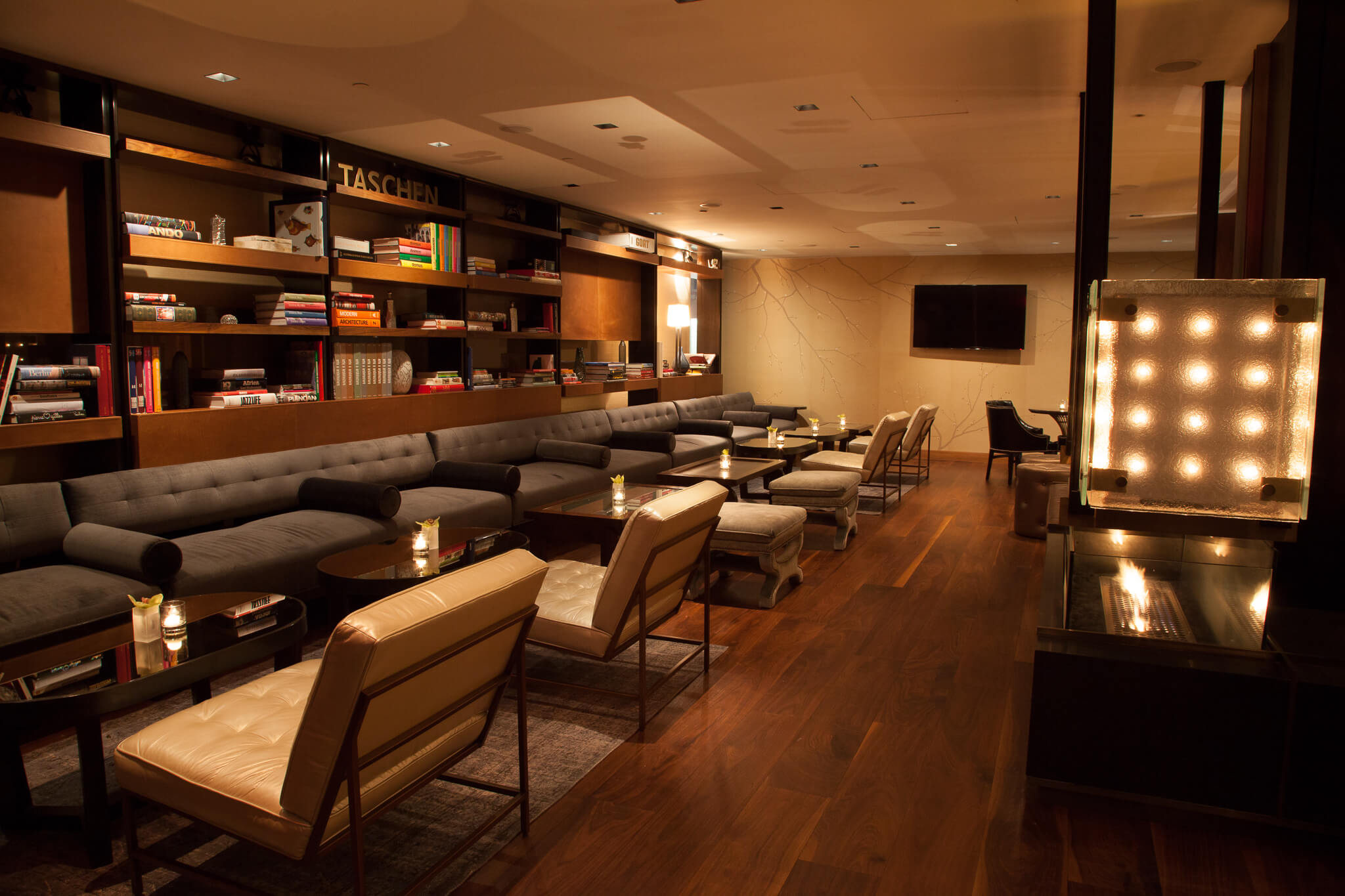 With a mature approach to decor, the Trump isn’t trying to be trendy: it is dignified and refined and the service is something else. (I tweeted about the only thing being missing from my bath was a rubber duck. When I returned to my room later that day a yellow rubber duck was sitting on the bath.) Don’t forget to check out the outside pool in summer months which has fantastic cityscape views.

Photo opportunity: Standing in the pool with the skyscrapers of NYC behind you. #NoFilter. 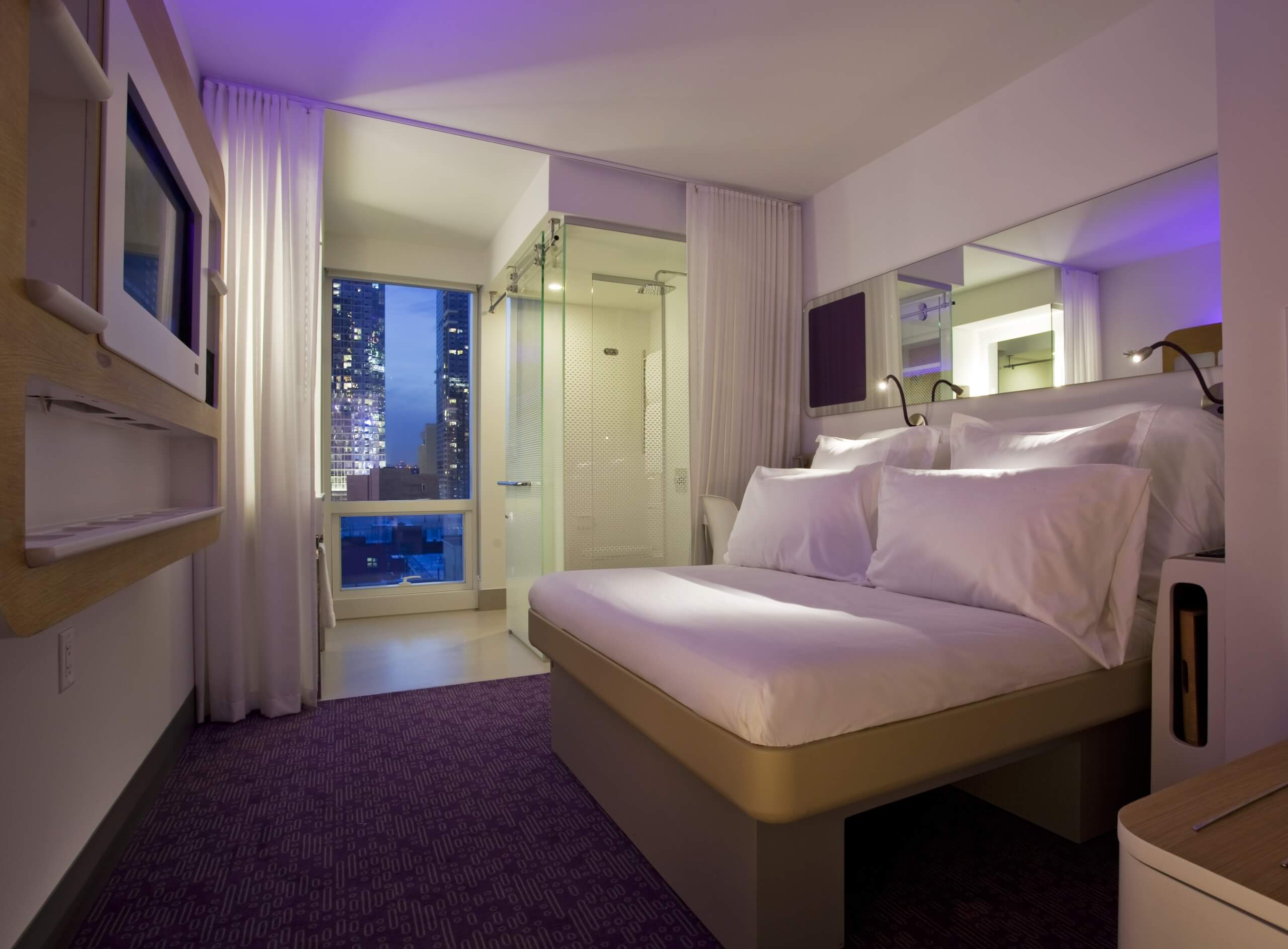 Budget doesn’t have to mean dingy, as Yotel proves so well. This Japanese brand was inspired by first class air travel and translated into a design for a small but luxurious cabin (or room to you and I). It’s now quietly revolutionising the low-cost scene, allowing you to book an overnight stay from $126. 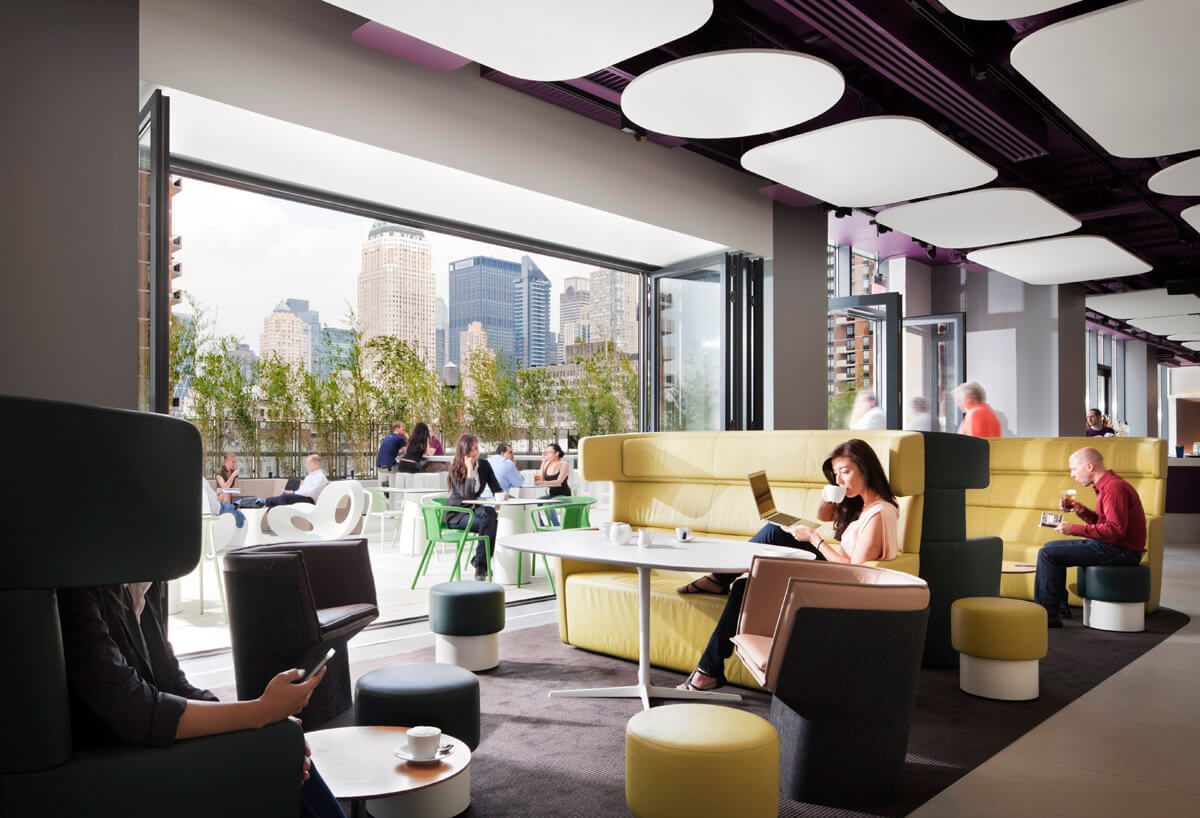 There’s no getting around it: the rooms are very compact, but are finished to a high spec with smart thinking. Sofas are transformed into beds at the touch of a button while thoughtful storage pods keep your stuff out of the way. One point: the glass walls of the (pretty swank) walk-in shower and toilet have a curtain, instead of a door. Keep the mystery in your relationship by saving anything serious for the loos in the bar area downstairs. No need to thank me. 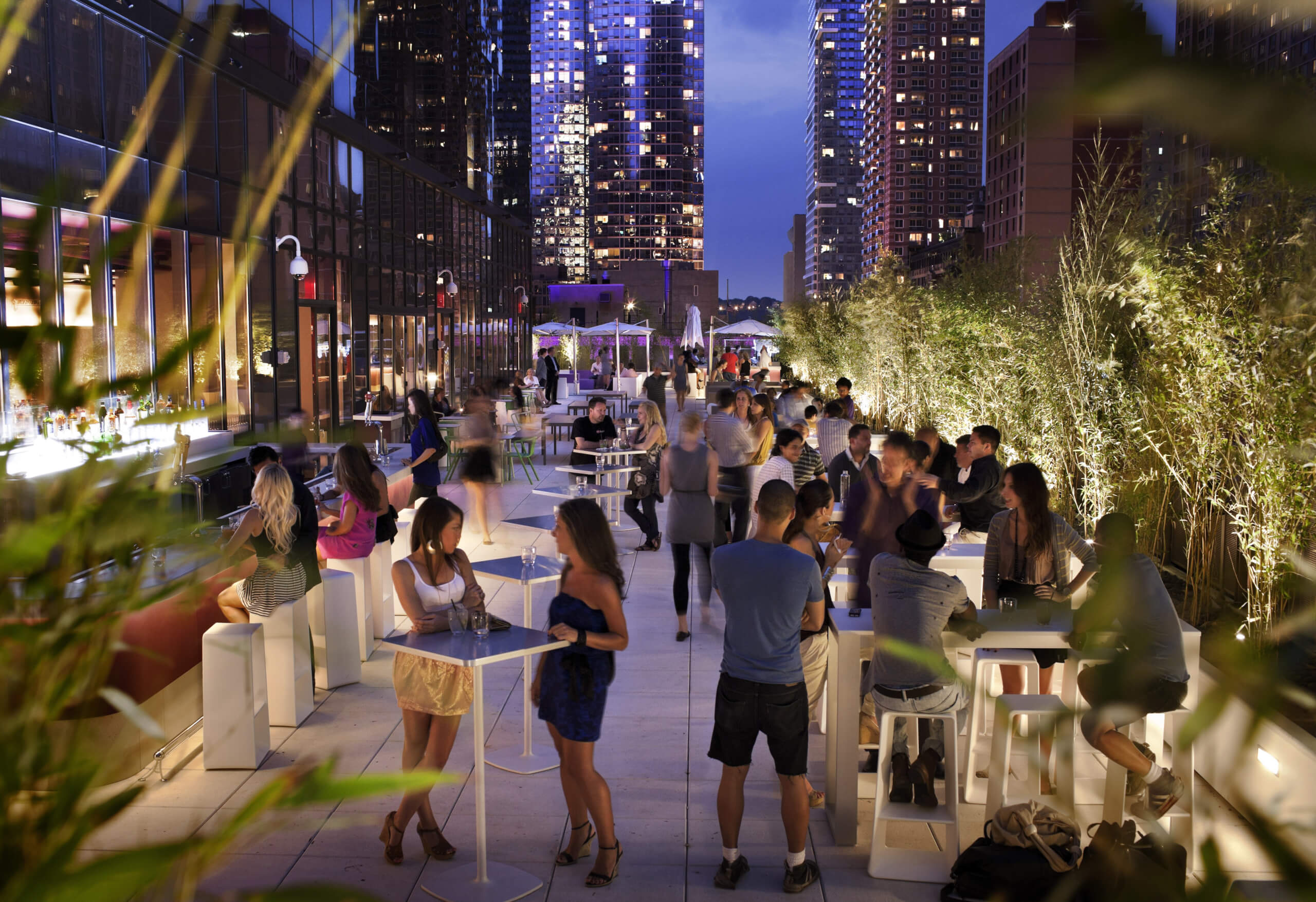 Reception features free phone chargers and wi-fi while the on-site restaurant serves up everything from sandwiches to sushi in a surprisingly lovely setting. Go early for happy hour. Complimentary breakfast muffins and tea and coffee are served here for guests in the mornings.

The hotel is also home to the city’s largest outdoor roof terrace, perfect for alfresco drinks in the warmer months. The best bit? A robot that stores your luggage in lockers for you. Totally Vine-able.

Photo opportunity: A video of ‘the robot’. #Obvs. 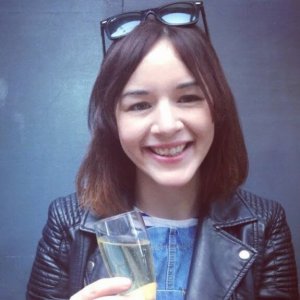