London / Culture / Theatre / About Time You Saw: The Red Lion

About Time You Saw: The Red LionBy Gilly Hopper

Twenty-two young gents kicking a ball about a pitch in a delightful fashion. “Pig farmers singing fuck off in various melodies.” The stench of beer-battered everything from beyond the stadium grounds. Match day; that weekly meet-up that unifies and divides us as a nation. High dramatics, bigged up characters and the subject matter of Patrick Marber’s latest play at The National Theatre.

Dealing in contradictory clichés – ‘a game of two halves’, ‘a 50/50 chance’ and so on – football may strike you as an unusual centre point for Patrick Marber to focus his efforts. “Football has high drama but in the most rigid of forms – in football there is unity of time place and action – as Aristotle recommended for drama. Very few outcomes are possible, yet moment to moment it’s exciting.” The Red Lion, Marber’s much anticipated  return to dramaturge explores the true spirit of the beautiful game, honing in on the small-time semi-pro football, non-league – but by no means ‘recreational’ – Red Lion Football Club. 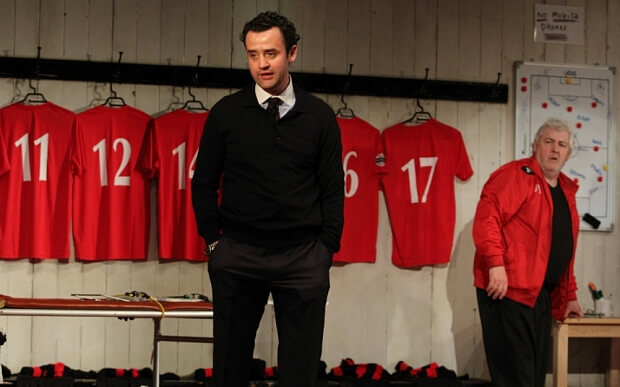 Returning to the National Theatre (after a ten year hiatus), Marber’s latest work, playing at the Dorfman, is charming, acute and tactfully paced. Embedded deeply in the spirit of the game – love, cooperation, respect, competiveness and ambition – Marber’s treatment is a sporting account of a countries love affair with the beautiful game and bought affection.

“Because let’s call it that”

Fluidly directed by Ian Rickson, the three strong cast are an ideal fit, depicting various stages of a man’s developing relationship with football. Centralised on father-son dynamics and the Godly, cult-like following of the game – a tender, savage love – the plot is straightforward, endearing and at times side-splittingly funny. Three men. One club. Endless speculation. To Daniel Mays credit, as maverick styled manager Jimmy Kidd, the comic actor is utterly beguiling. Minced words congregate in hot air as Mays dances around the stage, side-stepping dubious subjects with Del Boy flair. 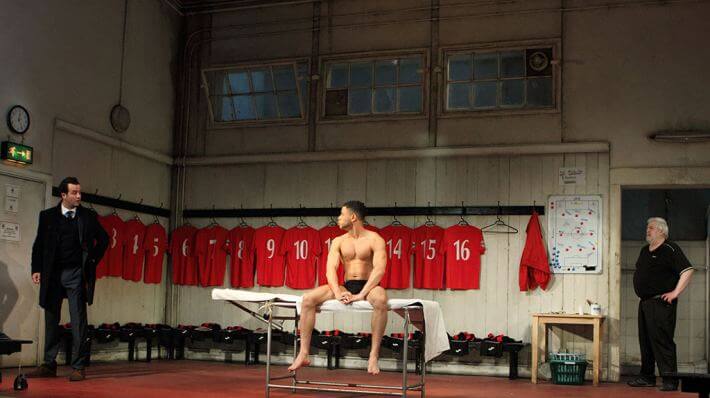 Congruent to Mays’ roguish exterior, pockets of truth ground the shows more poignant moments. Peter Wight takes his priestly stature as lonesome duffer, lending his time to the club as kit man. Glory years, wayward managerial skills and a place where he was “never so loved, nor loved this life so strong,” instills a certain nostalgia for the club’s bygone years. An unassuming, yet exacting, delivery by Wight, he embodies both the boyish and the aged characteristic of a former club manager and diehard  football enthusiast. Rounding off the first-class trio, Calvin Demba interjects a more contemporary approach to the game as promising ‘top class footballer’ Jordan.

A detailed play with touches of elegance and lunacy, The Red Lion is as contradictory as the sport itself; romantic, realistic, gentlemanly, brutal and a delightfully exhilarating experience. Get in.