Opening in 1908, London’s oldest pie and mash shop, Harrington’s, is currently playing host to a beguiling staging of Stephen Sondheim’s Sweeney Todd. This harrowing musical revives the Victorian penny dreadful The String of Pearls, featuring the unjustly imprisoned (and now infamous) Sweeney Todd who returns to London determined to wreak revenge upon those who framed him. The Demon Barber of Fleet Street sets up shop and his customers, soon to be victims, become fresh ingredients for Mrs. Lovett’s pies. He kills; she bakes. 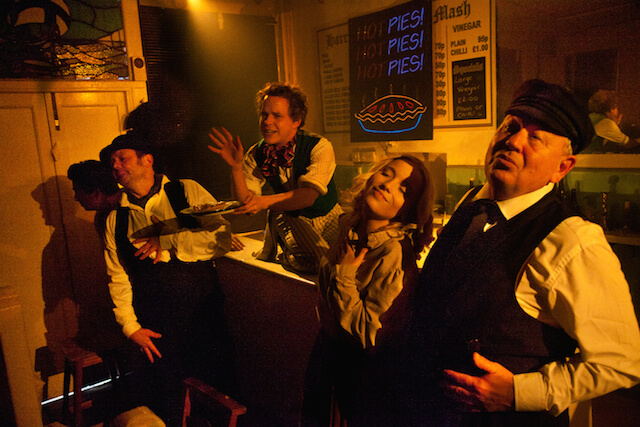 The vagabond Tooting Arts Club do not currently have permanent home, choosing instead to collaborate with local businesses in staging their productions, and by some miracle in fantastic town planning, a pie shop and a barber shop neighbour one another in Tooting. Actually there are three barber shops on this particular street, but I digress. The outcome? A site-specific production directed by Bill Buckhurst that packs punters in for an intimate retelling of this famed narrative. For an extra fiver, the Tooting Arts Club invites attendees to sample a pre-show pie at Harrington’s Pie and Mash Shop, and it’s certainly best to avoid eating anything post-show given the gruesome… well, you’ll see… And during the interval, audiences can congregate at the makeshift bar inside Anton’s barbershop across the street while the stage is reset for the second act. 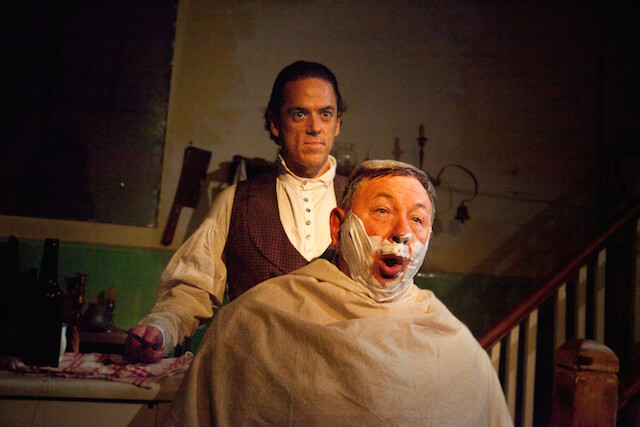 Lyricist Stephen Sondheim’s dark score impinges the surroundings of this seemingly pleasant shop, while a cacophony of cutlery and cups provide percussive interjections. Raising the razor on the cast’s unnerving vocal prowess, Mrs. Lovett’s (Siobhan McCarthy) postulating vocals are matched in vigour by Todd’s (Jeremy Secomb), and the duo offer their own quirks to freshen the revered and recycled character roles of this delightfully deceitful pair. Individuality is injected into popular repertoire, which includes ‘The Worst Pies in London’, ‘Johanna’ and ‘Greenfinch and Linnet Bird.’ 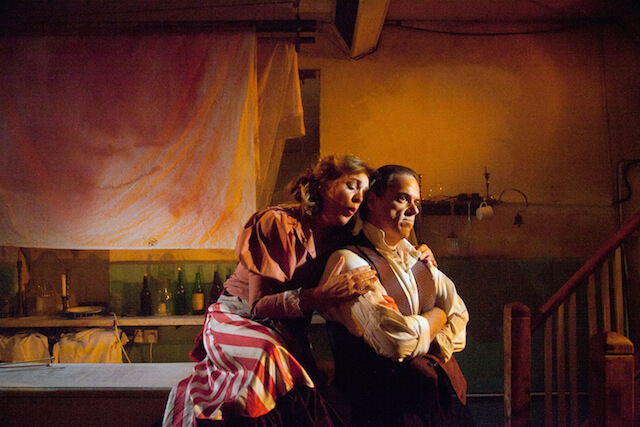 Prepare to be heckled, eyeballed and seduced by the cast of this macabre Sweeney Todd revival, which has positioned itself as the “one to beat” ahead of ENO‘s eagerly awaited production of Sweeney Todd, starring actress Emma Thompson and bass baritone Bryn Terfel, opening March next year.