‘I wasn’t being given the parts that I wanted. You graduate from drama school and the world is not waiting for you. I was like, fuck.’

I’ve got a lot of time for anyone who says fuck as much as Charlotte Josephine. And the fun doesn’t stop there – she also plays the saxophone, boxes, and writes a mean one-woman play. It was this last skill that helped her out of that very twenty-first century nightmare: the post graduation lull. Dissatisfied by the parts written for women – ‘fucking boring’ – she decided to write her own: Chloe, a young boxer, whose dream is to fight at the Olympics. The play, Bitch Boxer, was such a success at last year’s Edinburgh Fringe that it’s now running again at the Soho Theatre. 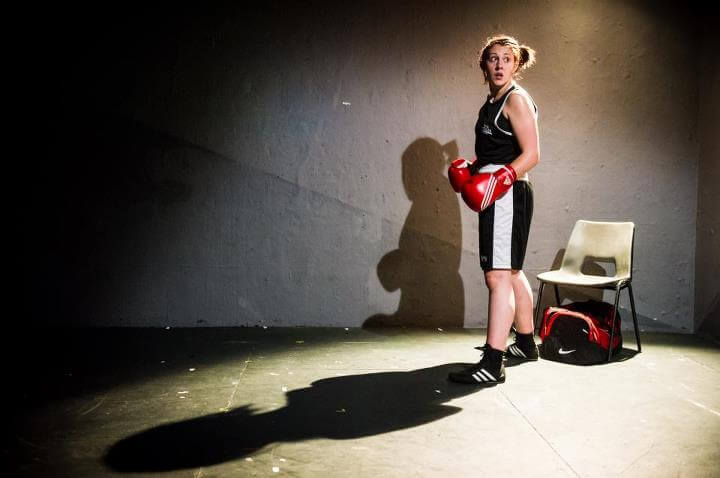 As Charlotte learned, the world isn’t really waiting for anyone anymore – it’s for this reason that most graduates are sitting in overheated offices, wading through spreadsheets with their eyes on the clock. Somehow, I don’t think Charlotte would be suited to the joys of Google docs – so it’s no wonder she decided to fuck the system and literally write her own future into reality: ‘I was like, what do I want to do on stage? OK, I want to do something that’s really fucking tiring that I have to work hard for physically.’

Charlotte signed up to her local boxing club and started going every day. ‘I fell madly in love with the sport,’ she tells me, and it shows: the play is a one-woman ode to boxing: the rhythm, the energy, the post-fight catharsis. And in a world of thigh gaps and size zeros, of thinspo and airbrushing, the role of Chloe is a precision-punch of fresh air.

Chloe was born after Charlotte worked in a coffee shop, lugging boxes, and some guy from the office next door made an ill-advised comment about how unladylike she looked. ‘I don’t understand why, in order to be attractive, I’m supposed to be this frail little thing that doesn’t have an opinion and doesn’t have strength… I don’t understand why women can’t express that, because we all have it, and I don’t understand why guys can’t express their vulnerability.’ Like any self-respecting millennial, Charlotte ranted about it on her phone before deciding to write a play about everyone’s struggle between the two ­– about ‘finding the strength to be vulnerable.’ 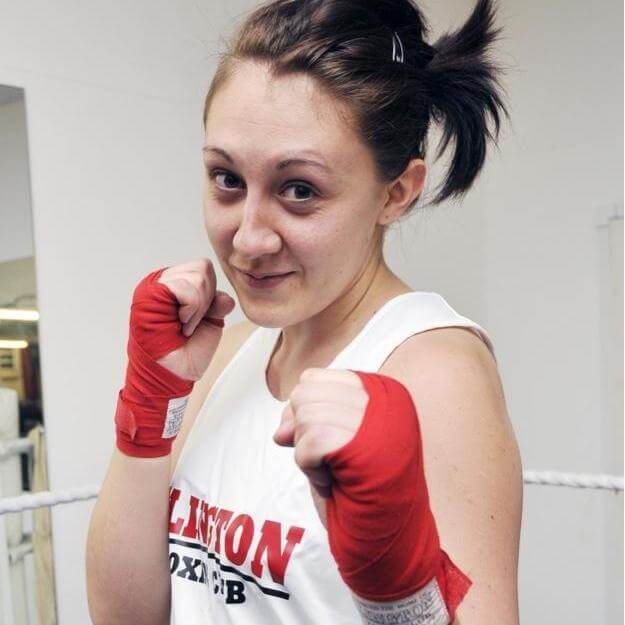 And that’s what’s so instantly loveable about Chloe – and the thing that kept me zig-zagging between happy and sad for an hour, resulting in an unattractive watery grimace. She sweats, she swears, she scales drainpipes, she drinks cherry sambuca and throws shapes to Rihanna in a shit nightclub – and then suddenly, in a second, her toughness melts away and she’s left blinking, shy, unsure. She’s at once hard as nails and vulnerable as a kicked puppy; in a world where boring gender platitudes are bandied about left, right and centre – ‘don’t be a girl’, ‘boys don’t cry’ – Chloe is a refreshing combination of the tough and tender.

Thanks to Bitch Boxer, Charlotte Josephine is going places. She’s been commissioned to write another play for Soho Theatre – and handed over the role of Chloe to (the very worthy) Holly Augustine: ‘It has been painful at times, it’s my baby… so to let it go slightly earlier than I wanted to has been tough.’

Tough, maybe, but life for Charlotte is sweet. When I end the interview by putting an unnecessarily macabre spin on the About Time theme and ask her what she’d do if she had one week left to live, she hesitates, then says: ‘My life right now is pretty great, so just continue with what I’ve got… So yeah, jazz, a fight, friends and family, fucking lots of chocolate… be out in nature a lot, hot baths, long walks – that’s so boring. I’m not as rock and roll and I think I am.’

OK, so her street rep has taken a beating, but someone who’s boxed in Sweden and written and starred in their own one-woman play has no need to throw televisions out of windows. I’m pretty sure her badass credentials are safe.