Lily Vanilli radiates an almost zen-like sense of calm: gliding around her small East London bakery, a platter of beautiful pastries and tarts in her hand. She had an unconventional route into baking, sort of falling into it after a degree in philosophy and a career in graphic design: but there isn’t much that’s conventional about Lily, not least her baking. 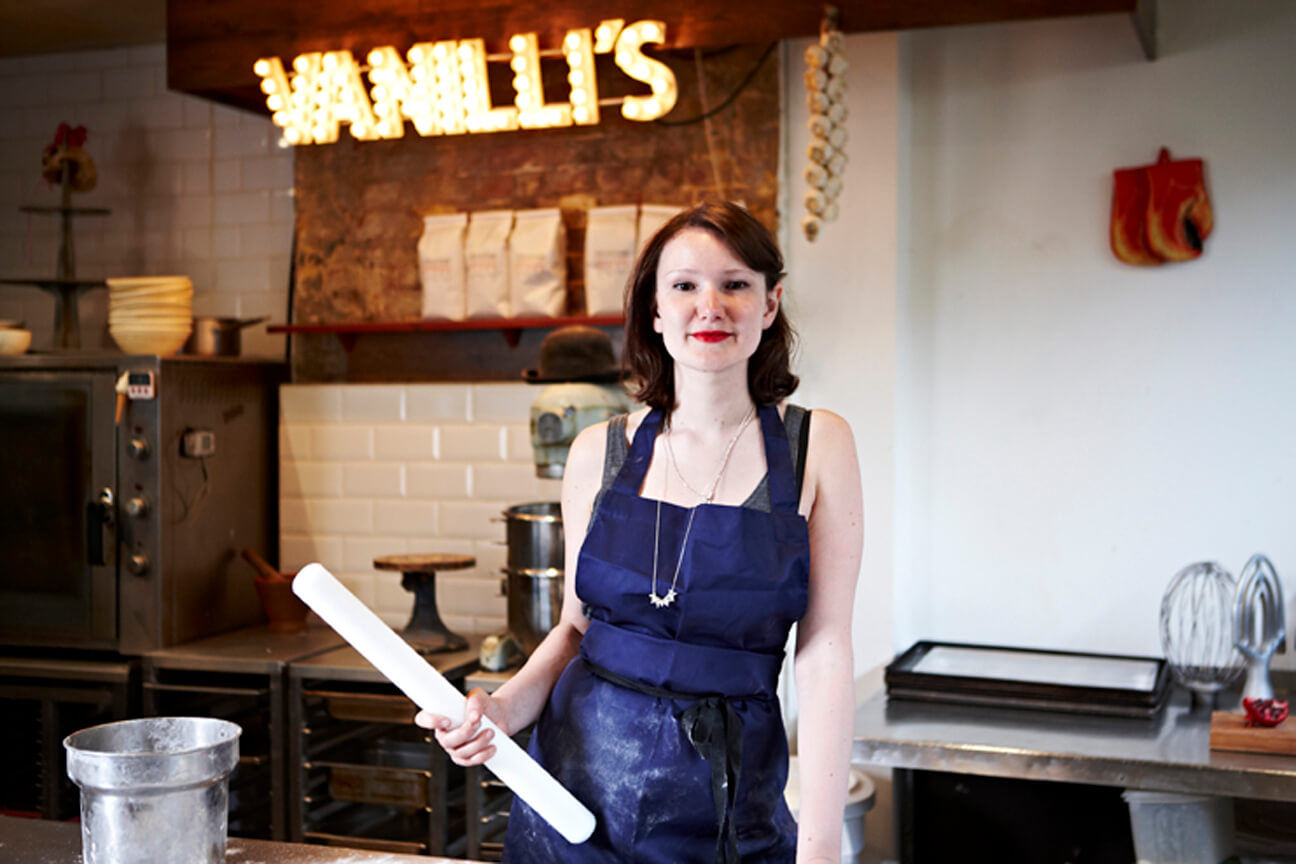 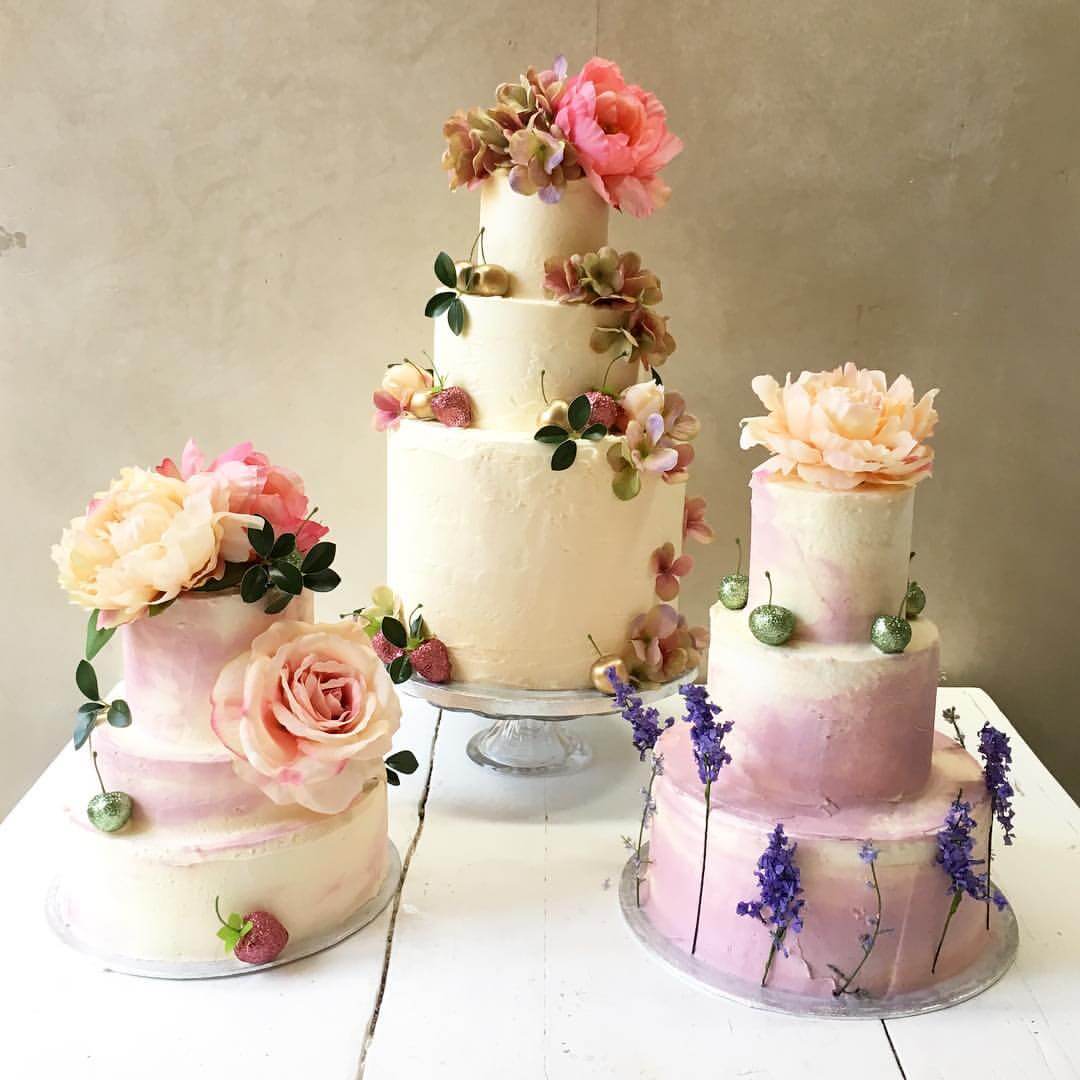 It all started when she returned to London from her design job in Australia and found the recession had struck and jobs were nowhere to be found. “I’d always worked, since I was 14, so I had to find something new.” Back then, for someone her age, baking was an unusual choice – but three months after she sold her first cake, an article in the Times got everyone noticing. “I just set out to make things that tasted good – when I started, I had a with some friends at a pop-up market and no-one ever came there, so we’d all just get drunk and eat cake. Then I suddenly became the go-to girl for people who wanted something really unique and bespoke.” Her early creations – the all-gothic vibe of scorpions and skulls and zombie eyes – won celebrity fans and a wide following. 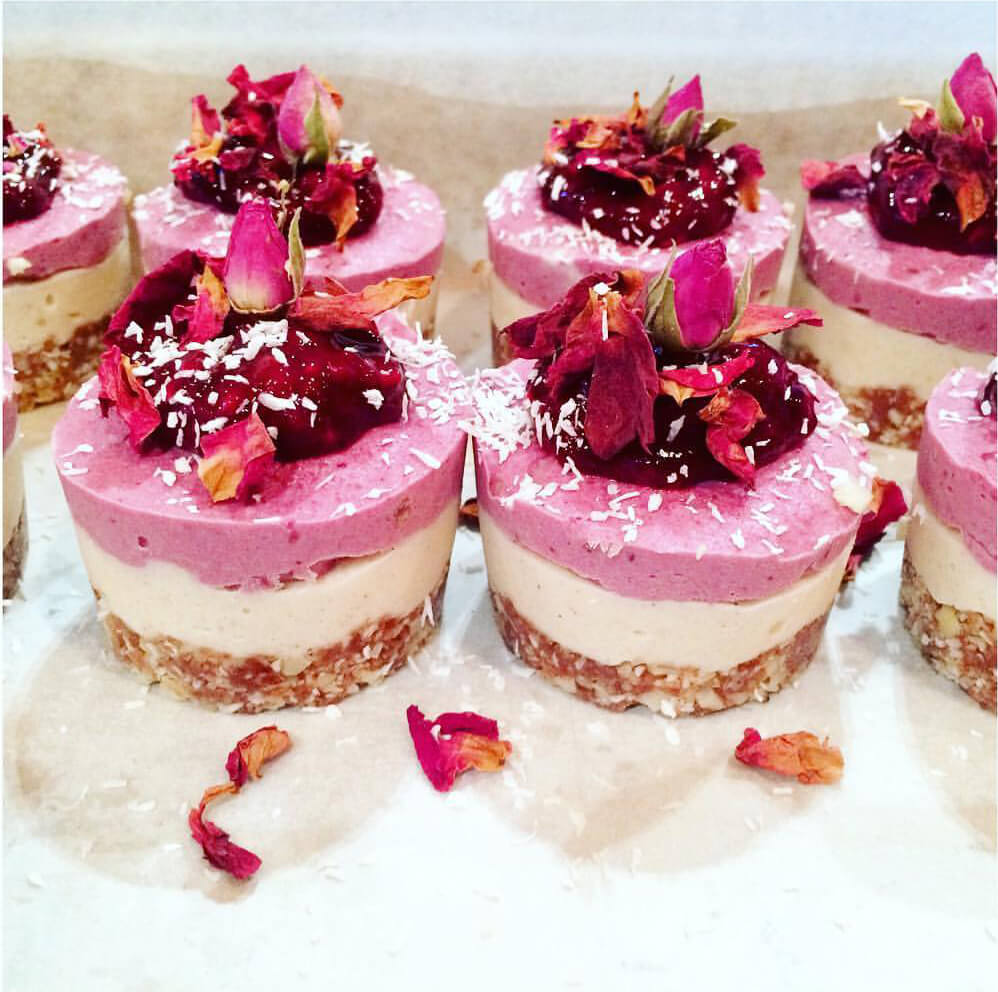 Such was the demand that Lily opened her premises up as a cafe on Sundays, moments from the Columbia Road flower market: there are constant queues out of the door for her sausage rolls, her brownies, her delicately constructed tarts. “We buy as much as we can from the local market and from London producers. My ethos is really to make something that’s delicious, using the best quality ingredients. And whatever the cake is made from is part of the decoration – we don’t use fancy piping or equipment, it’s all kept simple and fresh – and it’s so important not to make things too sweet.” 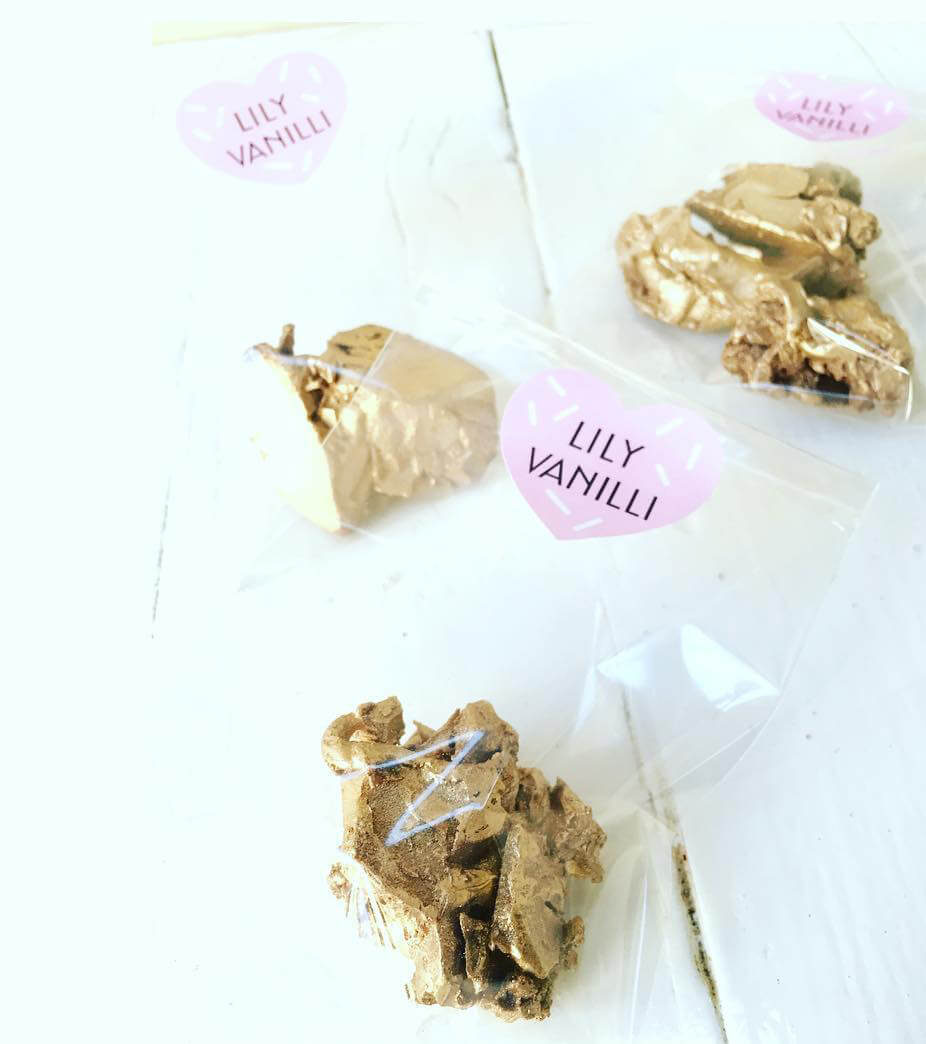 There are vegetable-based cakes like the ‘Tutti rooty’ – a gloriously spicy, Christmassy mix of beetroot, parsnip, sweet potato and carrot: some just happen to be gluten free, but not as a dietary choice. “It’s never a compromise on flavour. Italians always make their cakes with ground nuts, and I love the texture that brings.” One of the newest recipes is a blood orange and black sesame friand, moist and rich and balancing the acidity of the fruit with the richness of the cake. “I think it’s one of the nicest things I’ve ever made. People buy one and then ten minutes later they’re back to buy another.” 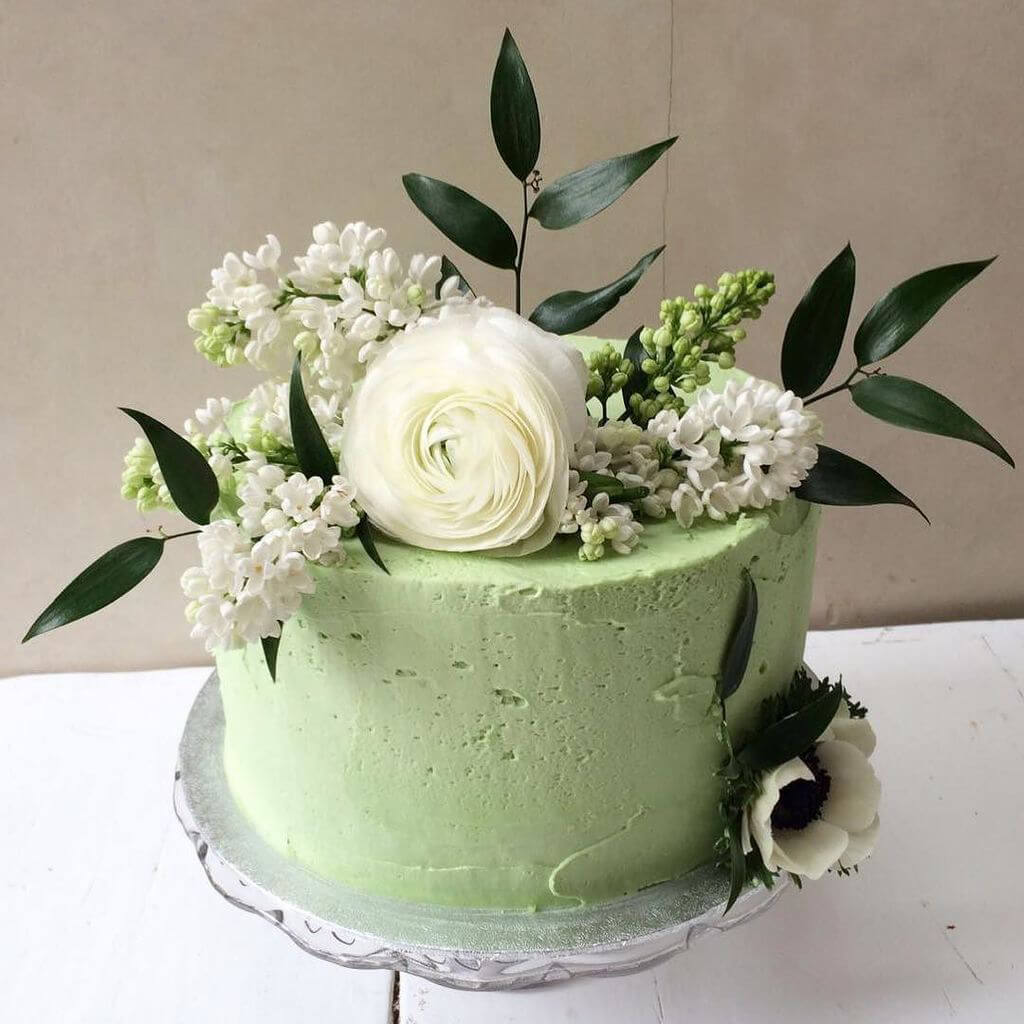 The friand is part of an exciting new development for Lily – a range of her cakes are about to be available seven days a week at Fortnums, who approached her to supply their food hall. “I’ve always said no to department stores in the past.” she says, “but they’ve got a really exciting team who are pushing a really cool and modern aesthetic.” 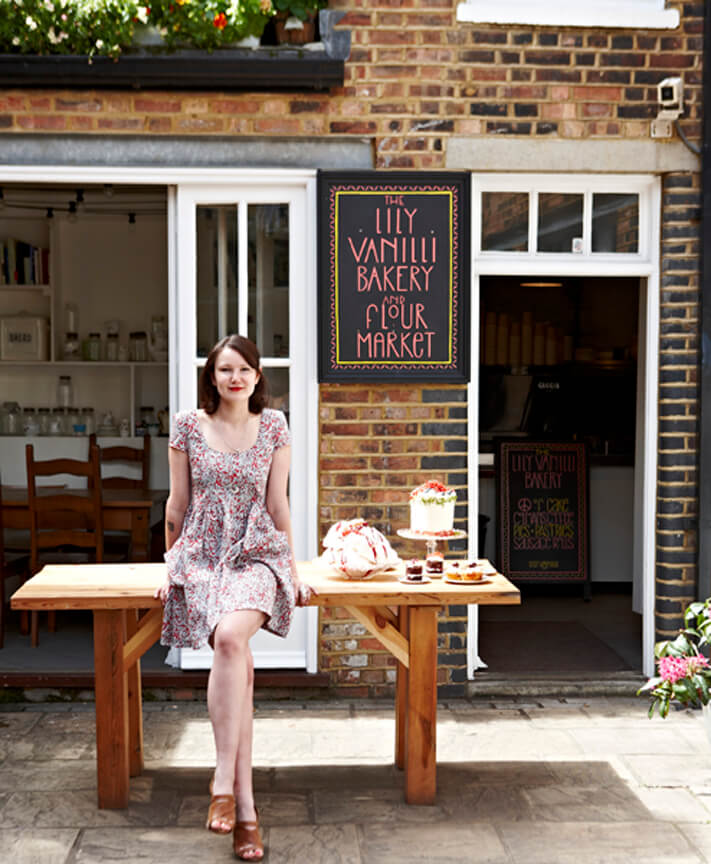 The Fortnum’s range includes a beautifully made rose apple custard tart, a light, creamy lemon tart, her award winning chocolate brownie and a  cherry bakewell. “I decided to start making the bakewell again – Vogue said it was the best in town, and I hadn’t done it for years.” The tart is a triumph of its kind: buttery, short pastry, plenty of rich frangipane, and a layer of homemade cherry compote. And best of all, the new showcase offers a chance to mix up new recipes with old favourites. Plus all her bespoke cakes – made for weddings, birthdays, christenings, will all be available for order at Fortnums too. 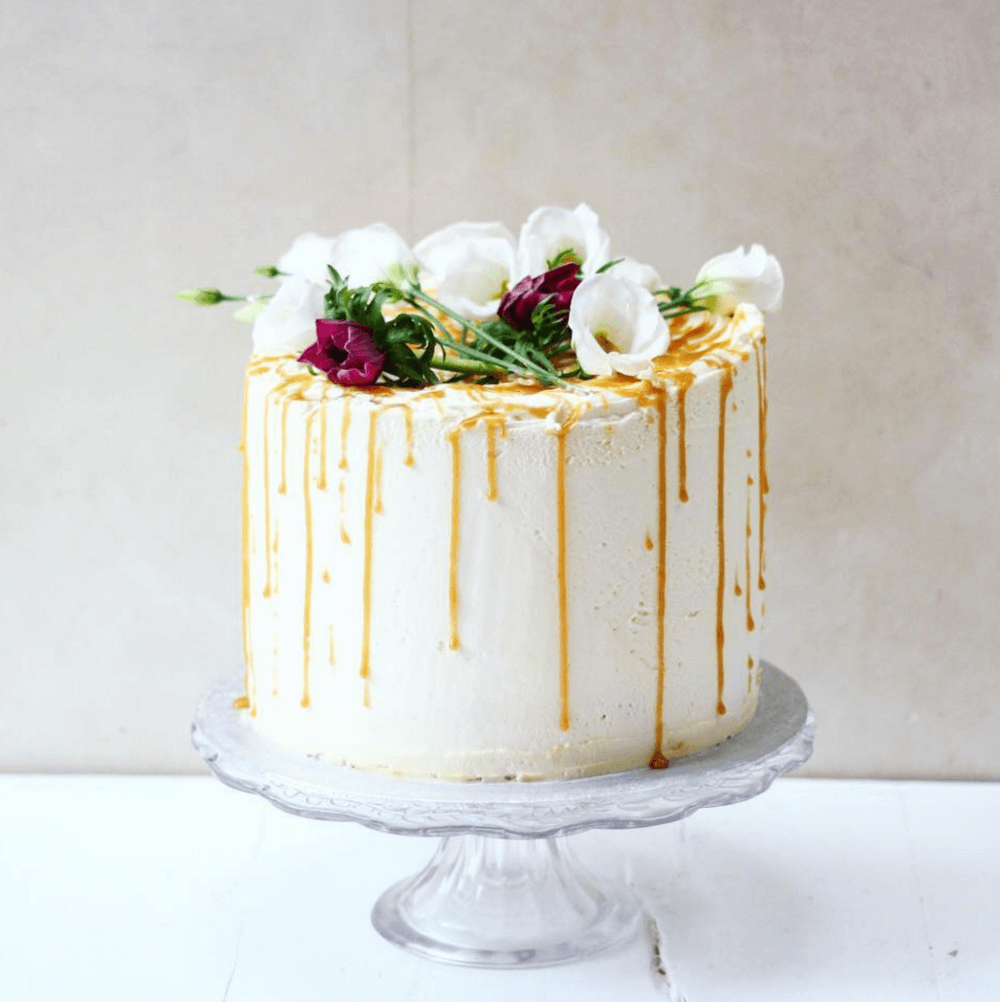 Lily’s business has grown so successful she’s now employing two bakers – and an entire team to run the Sunday cafe. And she makes it all look so effortlessly cool; belying the huge amount of hard work which makes it all happen. “For Fortnum’s, we’re thinking Breakfast at Tiffany’s, 2.0. A very cool girl, just sitting at a table surrounded by cakes.”

This is a bakery where tradition seems to merge seamlessly with modernity: where the cakes are as delicious as they are beautiful to look at. Cakes for the Instagram age, to be sure: but irresistible, too – right down to the very last crumb.