We’ve teamed up with our pals over at Collier’s Welsh Cheddar to bring you a whole week dedicated to one thing: cheese. Kicking things off in style, we’ve discovered the capital’s best cheese on toast. Tuck in:

The Lowdown: Dishoom always has such a great vibe, and the food is top quality. They also serve unlimited porridge and unlimited chai on weekdays, so you can make a morning of it. Word of warning: it gets really busy at the weekends, so prepare for a queue. It’s worth it though – their bacon and egg naan is a thing of legends, and this beauty – their Bombay spin on a British classic. 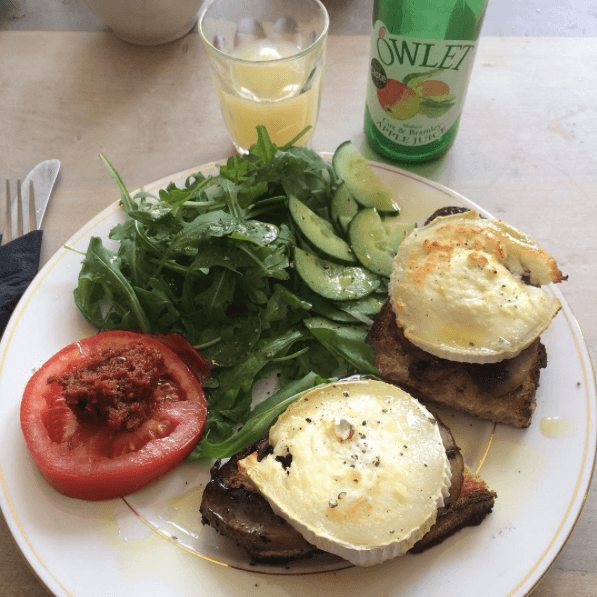 Order: Cheese on toast with Nadya’s homemade chutney and salad £7

The Lowdown: Mouse & de Lotz is an East London favourite. There’s real warmth at this quaint neighbourhood cafe. It has a really rustic feel, think; shabby chic decor, mismatching chairs and painted floorboards. Known for their coffee, their caffeine creations do not disappoint – the latte is the one, Here, breakfast and weekend brunch is taken very seriously. The menu changes weekly, and their cheese on toast is a generous portion of goat’s cheese on a slab of sourdough.  It’s a simple dish, with big flavours. 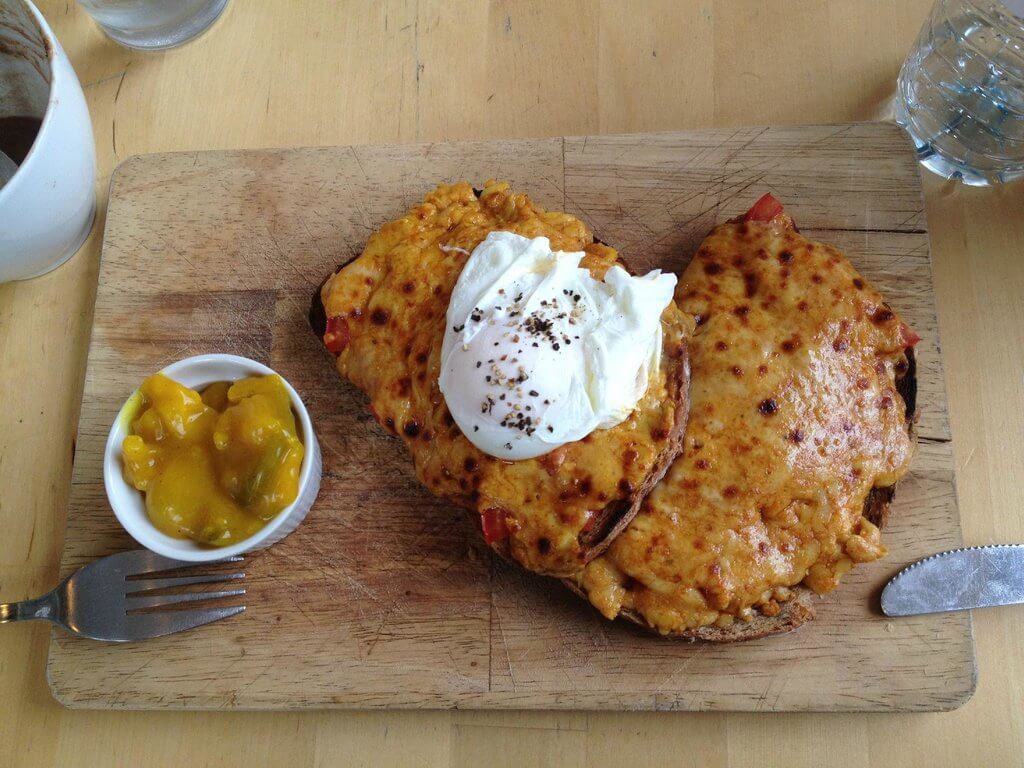 Order: Welsh rarebit with piccalilli and a poached egg (£6.50)

The Lowdown: Stick Boyden’s Kitchen in Central London and the crowd would go wild. This North London spot has learnt itself quite the reputation for banging out consistently good nosh. There isn’t a large seating area, but in the summer months brunch is served under the rays. Regular brunch dishes feature on the menu, along with quirky items such as the veggie burrito, their take on a BLT and a Mexican spin on the eggs Benedict. Their Welsh rarebit is reminiscent of the cheese on toast made after a night on the tiles – a glorious portion of melted cheese on a thick slice of bread. 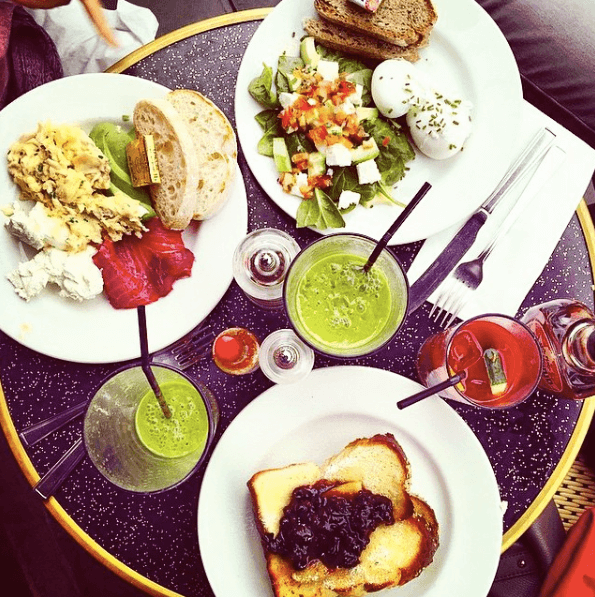 The Lowdown: Step into The West Fish Cafe, and you’ve stepped back in time – 1930’s style. However, the food is anything but retro. This cafe come brasserie are experts in modern European cuisine, and regularly hold music dinners including live performers and good food – a double whammy. For a good value and great tasting brunch, you can’t complain at The Wet Fish Cafe. Tuck into a wide range of egg dishes along with their cheese on toast – no weird superfoods or wacky flavour combos. Don’t fix what’s not broken. 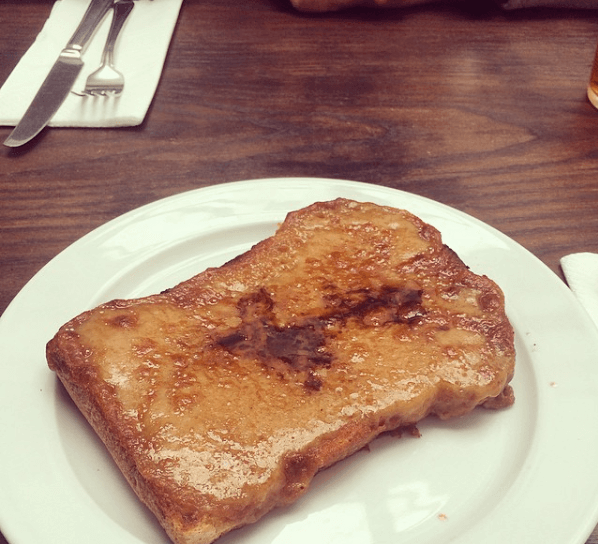 The Lowdown: Part of the St JOHN group, who are known on the foodie circuit for their epic doughnuts, St JOHN Bar and Restaurant is a laid-back eatery found a stones throw from Smithfields Market. The daily changing menu is full of comforting dishes, and one things for sure; their famous Welsh Rarebit is always available. The Welsh rarebit may not be much to look at, but suffocating the toast is an endless amount of gooey cheese topped with a splash of Worchester Sauce. A right, proper nostalgic breakfast/lunch. 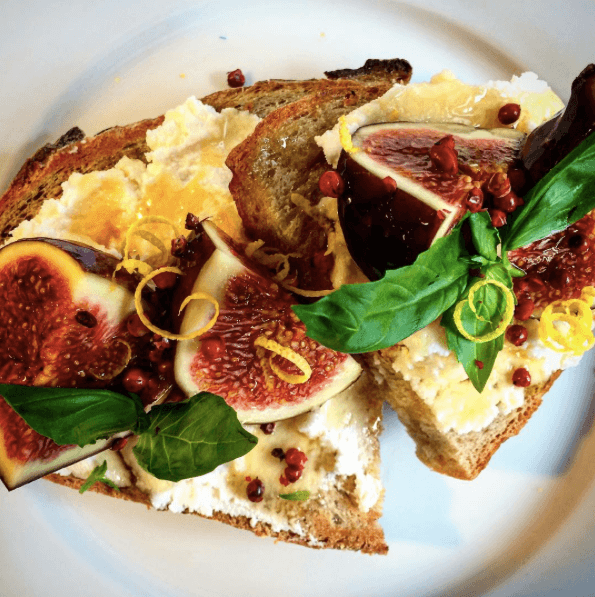 Order: Ricotta, lemon and basil bruschetta with figs and honey on sourdough toast

The Lowdown: The guys and gals at Maison d’être are on a quest, a quest to uncover the best coffee and use organic and sustainable ingredients where possible. The source their produce from the finest suppliers in London, including bread from E5 Bakehouse, coffee lovingly roasted by Square Mile Coffee Roasters, and homemade jam from London Borough of Jam. The easy-to-navigate menu feature vegan bites, gluten-free cakes and brunch dishes. Their ricotta on sourdough is a perfect balance of sweet and savoury flavours, finished with figs and honey. 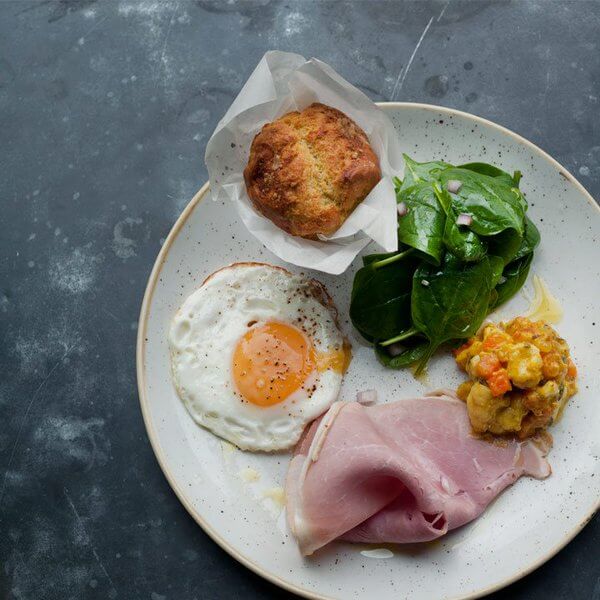 The Lowdown: Grain Store has pioneered the use of vegetables as a hero ingredient since it opened in 2013. Although many dishes do have a meat or fish element, Grain Store’s menu gives vegetables a prominent, if not starring role. The weekend brunch menu curated by Head Chef Bruno Loubet features red lentil and chickpea hummus sprinkled with dressed sprouting beans and spicy labneh with Baghdad eggs flatbread. In true Grain Store fashion, their take on the humble cheese on toast includes a cheese infused muffin served alongside a tangy made-from-scratch piccalilli. It’s off the wall, but that’s why we love it. 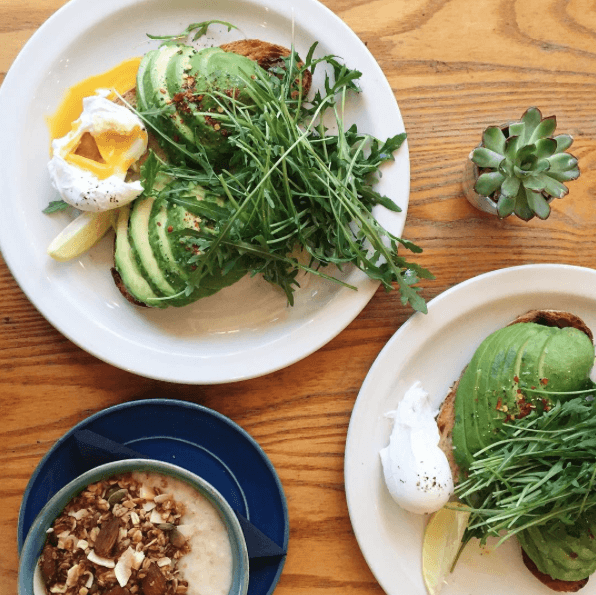 The Lowdown: Sunday Cafe is a local joint that has nailed the brunch life. It’s a popular haunt on the weekends for their homemade cakes, coffee and hot dishes. At Sunday it’s all about decent portions, good value and excellent quality. They don’t take bookings at the weekend, so be prepared to queue or get there early doors. The rarebit takes on new life at Sunday thanks to the addition of their slow cooked ham hock. And, we can’t turn down a dish when it includes avocado. 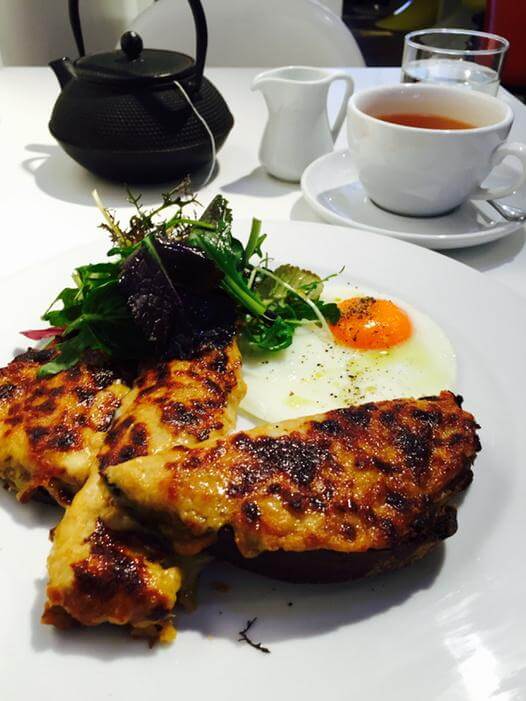 The Lowdown: The Ottolenghi empire has received critical acclaim since opening their first shop back in 2002. Now operating out of four outlets across the city, the Ottolenghi Spitalfields branch is our favourite. The food is vibrant, comforting and uses ingredients that are simple yet daring. Mediterranean influences help them create varied dishes packed full of flavour and spices – and you can’t miss their great Shakshuka at Nopi. At Ottolenghi, the Welsh rarebit is stacked high with cheese, slowly bubbling away on toast. It’s everything we want from a breakfast dish – home cooked, hearty and delicious.

One to make at home.. 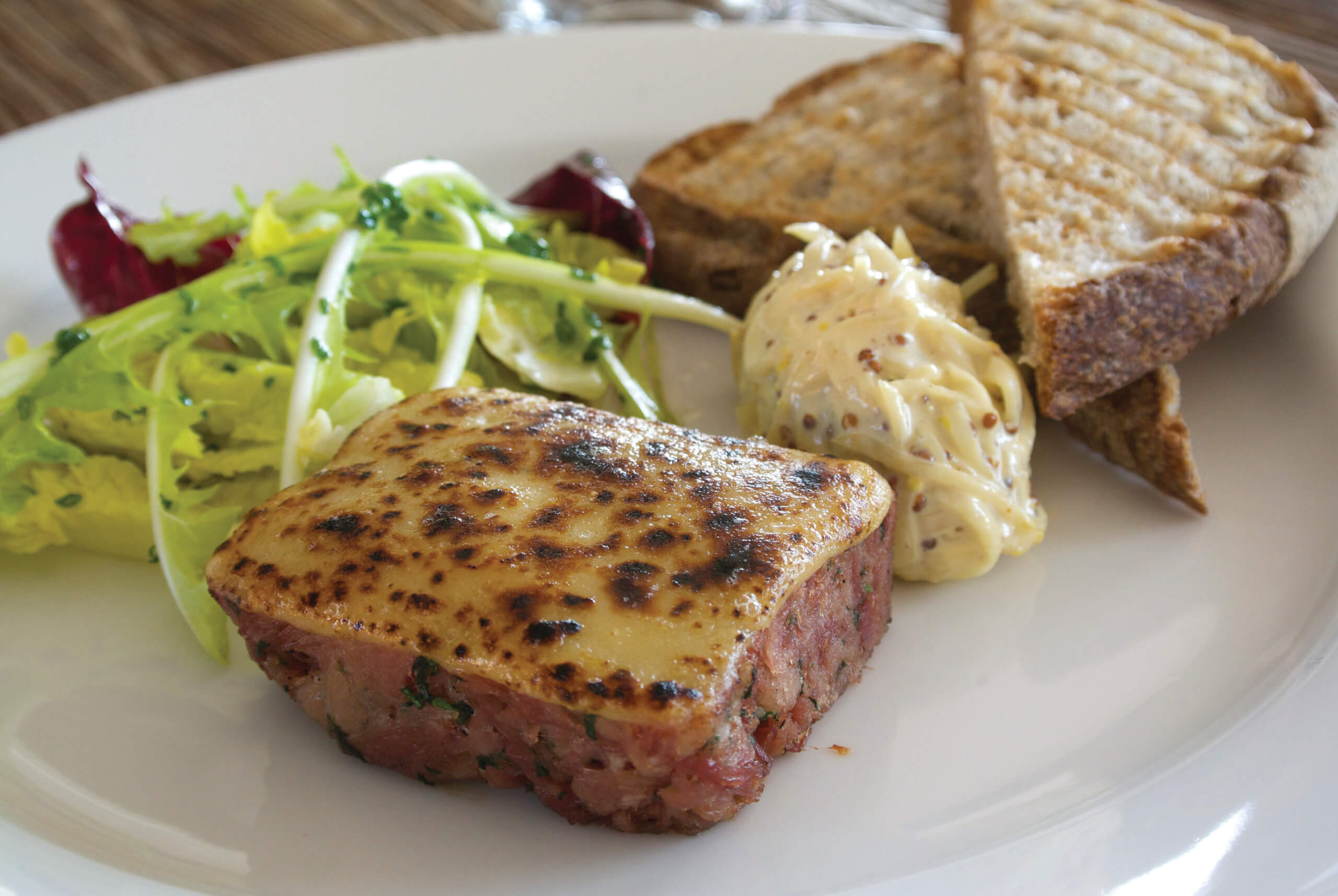 What: Collier’s Welsh rarebit on ham hock with celeriac remoulade and rocket

Method
1. Melt the butter and add the flour to make a roux. Heat the 100ml of milk and 125ml together with the reduction of beer and bring it to a boil. Gently pour this onto the roux to make a thick sauce and cook gently for 5 minutes. Stir in the English mustard, and season with the Worcestershire Sauce and Tabasco.
2. Remove from the heat and stir in the grated Collier’s Cheddar followed by the egg yolk. Pass through a fine sieve whilst hot and allow to cool. Slice the set ham hock into 8 equal thick pieces.
3. Grill the sourdough. Spread equal amounts of the Rarebit over the top of each ham hock slice.
4. Squeeze out any excess moisture from the celeriac and mix with the grain mustard & mayonnaise. Grill the rarebits under a grill until golden brown.
5. Place on a plate with some rocket and seasonal leaves. Toast (grilled sourdough) and celeriac remoulade.
Share6
Tweet
Share
Pin
6 Shares