With Olympic fever sweeping the nation, it seems right to celebrate the only way we know how – with copious amounts of cocktails with a slight Olympic twist, and dishes with tenuous links to Brazilian cuisine. If there was a gold medal for eating, we’d be the champions:

1. For a Brazilian Menu: Darkhorse 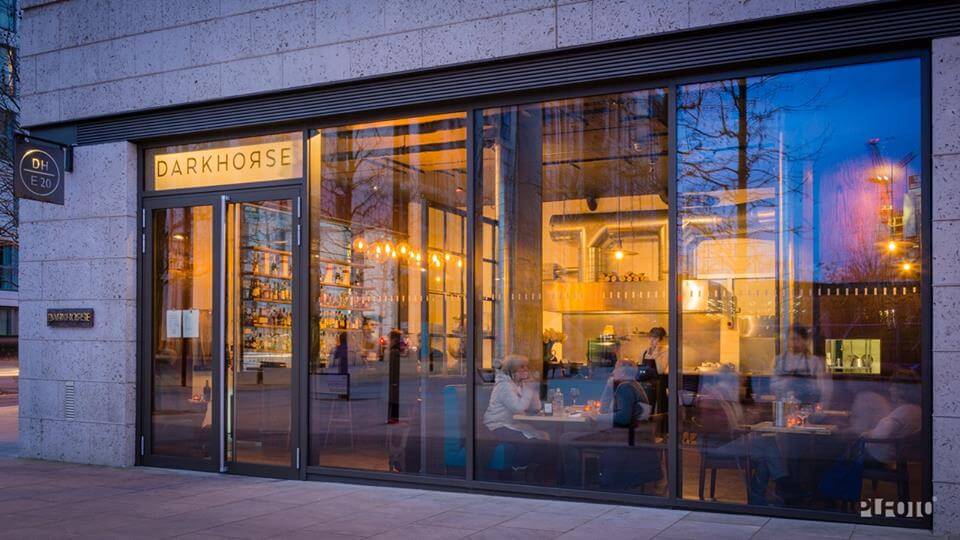 What: Bringing the Olympic spirit back to East London this summer, Darkhorse will offer a Brazilian-inspired menu of food and cocktails to celebrate the Rio Olympics. The menu begins with a starter of baked crusted Bacalhau with onions, potatoes and sweet pepper dressing, served with a Cachaça, watermelon and passion fruit cocktail. A main of roast hake with pancetta, black beans, and chorizo feijoada is paired with a glass of Alianca Dao, while dessert is a lemon custard puff pastry tart served with a cashew and coconut batida.

Go for Gold: All of their meat and fish is cooked in their custom built Bertha charcoal-fired oven. Smokey and delicious.

2. For a Lunchtime Option: Benugo 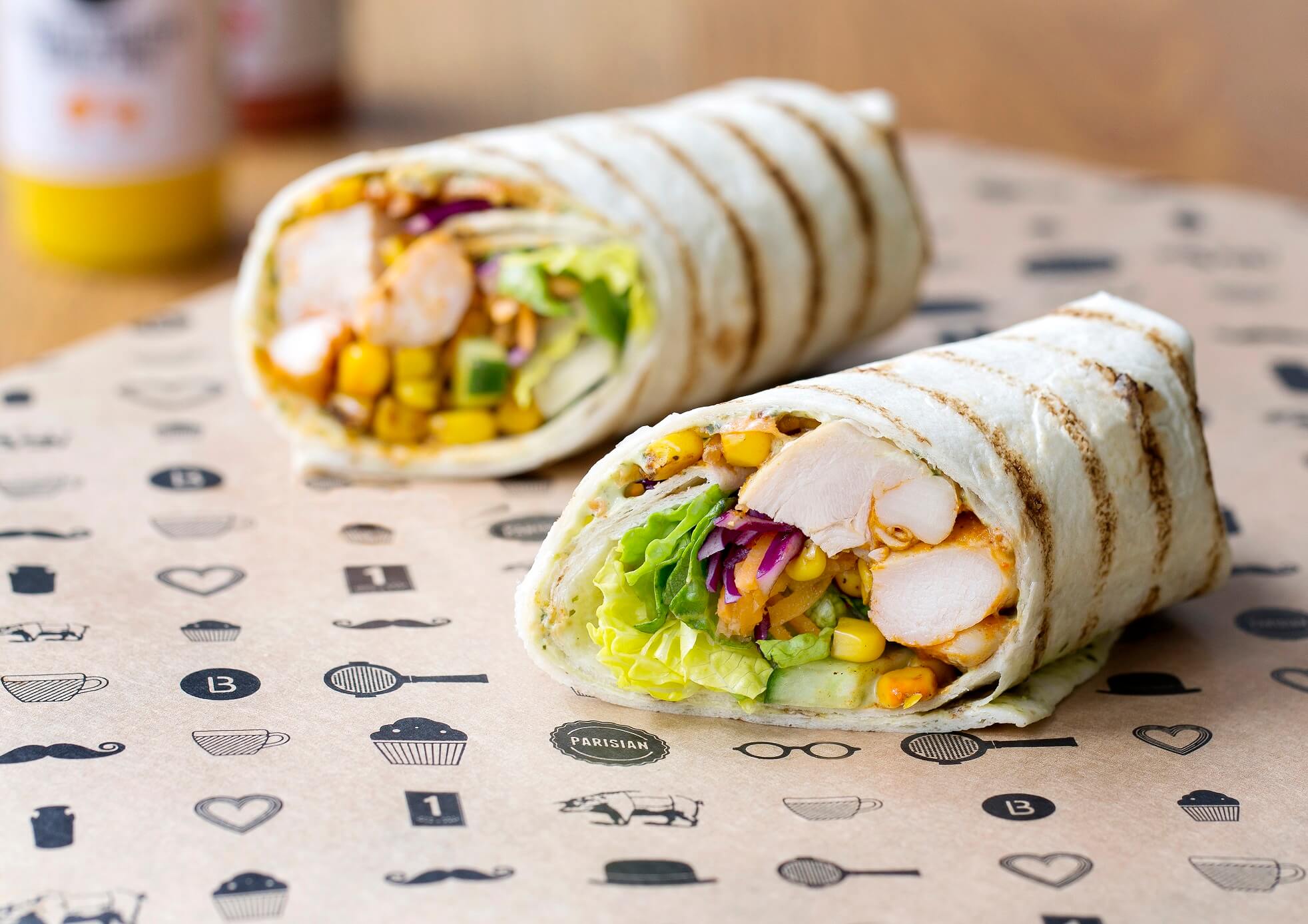 What: Benugo will be offering everyone the churrasco chicken hot wrap as part of the rotating daily specials to celebrate the 2016 Games. The Brazilian BBQ inspired dish, is zesty and full of flavour and will be available every Thursday for the duration of the Olympics at all Benugo high-street shops.

Go for Gold: Not Olympic related, but their super breakfast pot which combines strawberries, blueberries, banana, and honey and chia Greek yoghurt topped with granola is a contender for the best on-the-go breakfast award – if there ever was one. 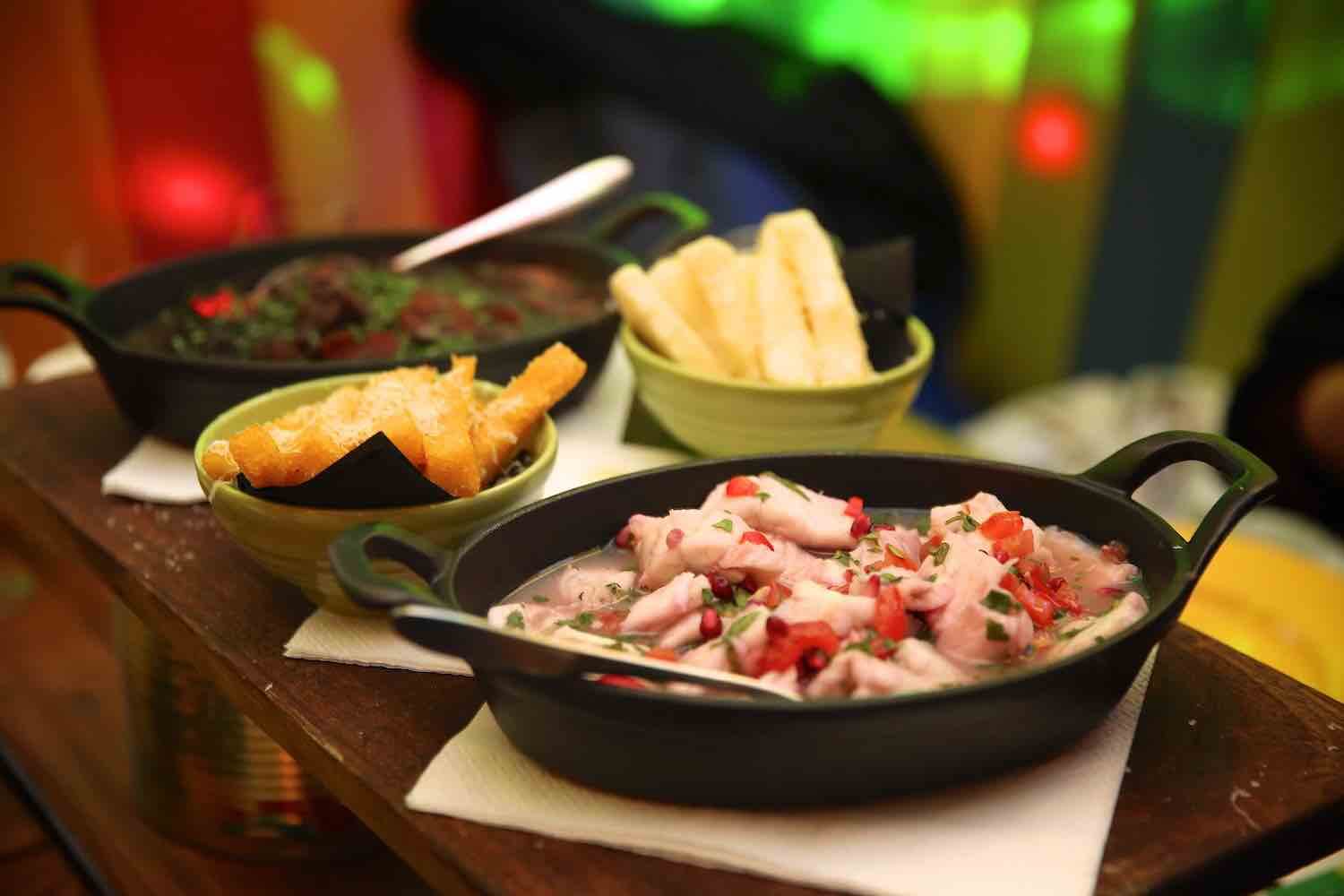 What: Bunga Bunga will transform itself into London’s ultimate Brazilian hub, featuring an exclusive Olympic-themed pop-up upstairs in their Latin American-inspired beach shack, Cocobananas. The Brazilian pop-up will kick off the Opening Ceremony on Friday (5th) with a Brazilian-inspired Supperclub hosted by, Natalie Salmon of the Latina Cook, who has created a menu including chicken heart skewers, seabass ceviche, Brazilian pastels and avocado ice cream.

Go for Gold: The pop-up will be decked out with the flags of Brazil, palm trees, banana leaves, beach balls, exotic flowers and lounge chairs and will feature a Caipirinha bar, a dedicated Olympic-themed cocktail menu and samba dancers. 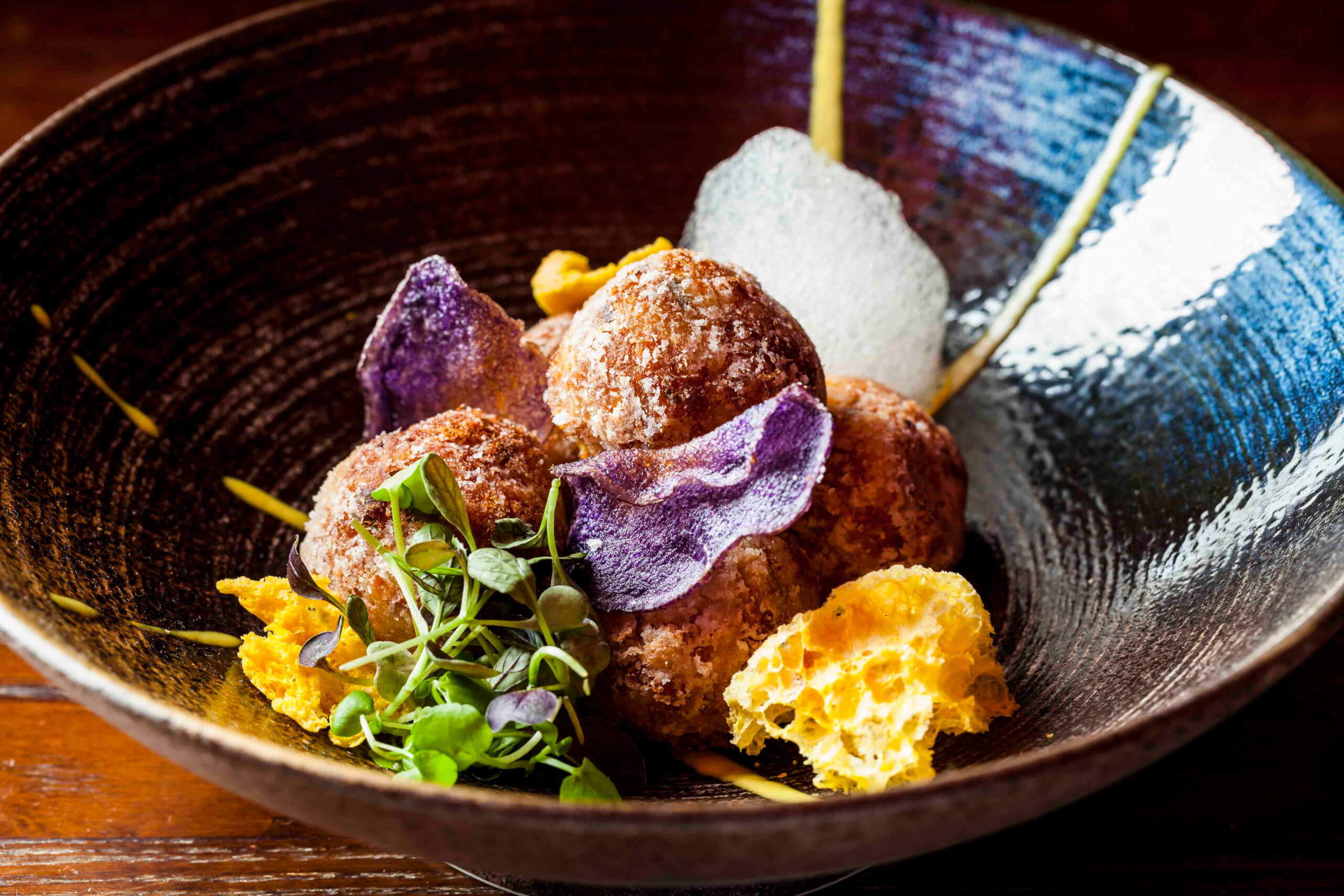 What: The kitchen beavers at Sushi Samba have been busy perfecting their Olympic menu. There’s a choice 0f 5 new dishes, which will be running until the end of August. These include; poa de queijo with mango, chorizo, paprika, and yellowtail nigiri topped with coconut and lime. There’s also pasteis and caipirinha, and bolinhos de bacalhau served with lime, aji amarillo and Peruvian potatoes.

Go for Gold: We’re big fans of dessert, and the new pud at Sushi Samba is a cracking one – rabanadas with vanilla, pineapple and passion fruit. Ooo-er.

5. For Cocktails: The Cinnamon Club 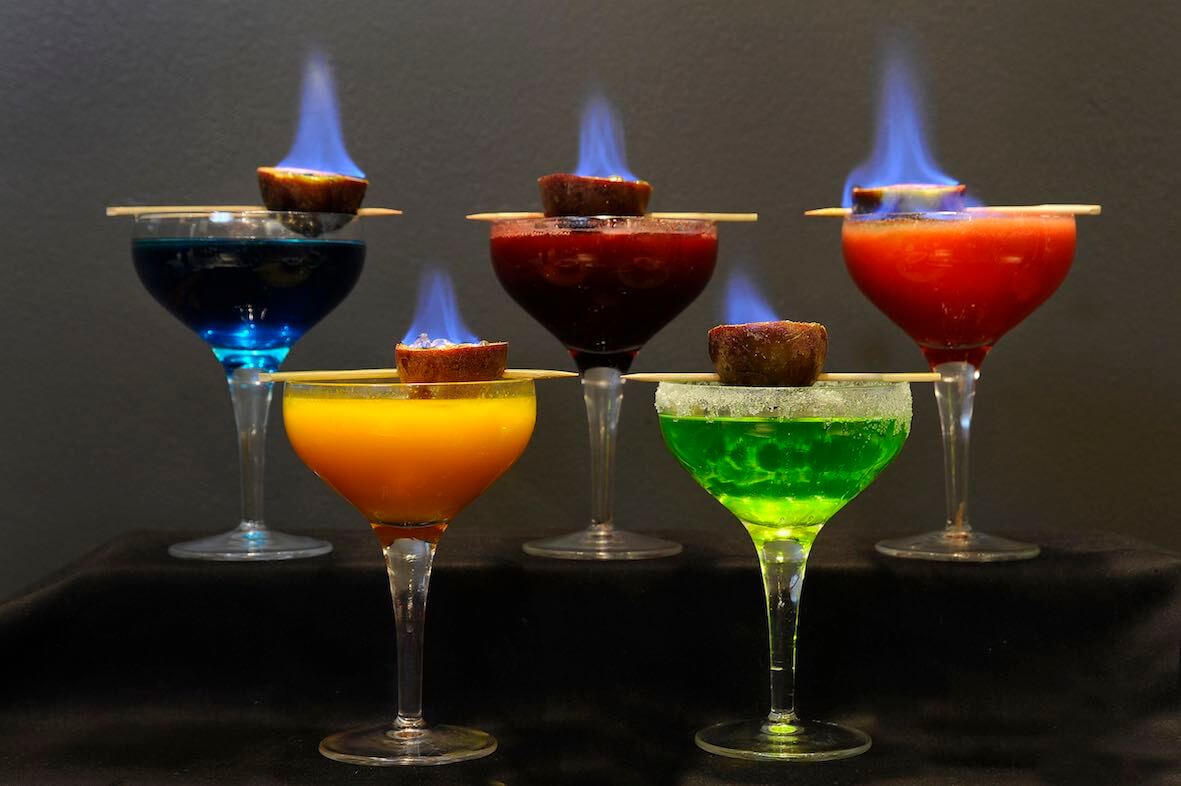 What: The Cinnamon Club has created a selection of Olympics-inspired cocktails for everyone to enjoy whilst watching the games live from The Cinnamon Club Bar. The selection of  tipples have been specially created to mirror the five colours of the Olympic rings: blue, red, green, yellow and black, alongside their signature Hibiscus Caipirinha. The blue cocktail, titled The High Dive includes fresh blueberries and raspberries, topped with Champagne and served with an hibiscus rim.

6. For Global Grub: The Distillery 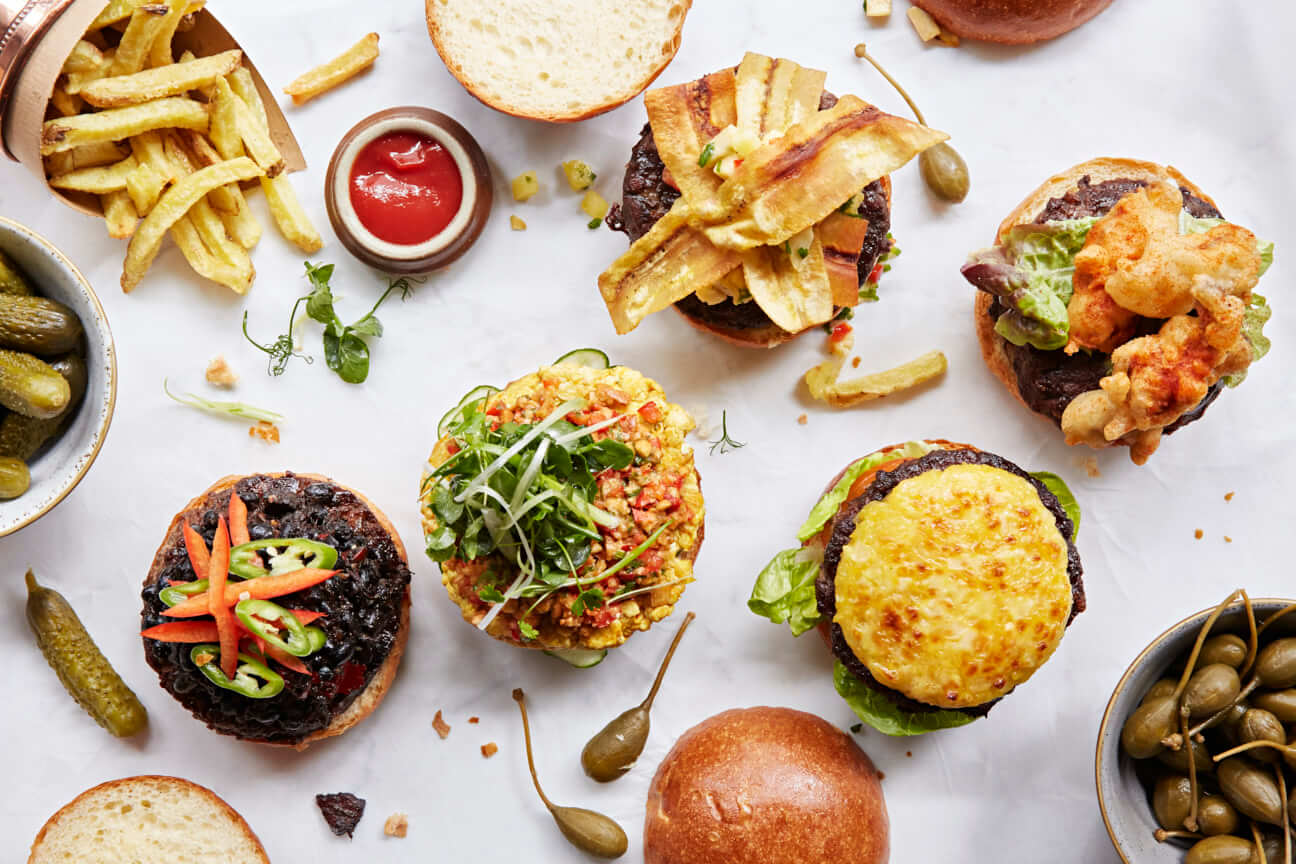 What: The Distillery will be serving their famous Wagyu burger with a selection of toppings, each inspired by the cuisines of the world’s continents. Highlights include Australasia’s burger – a classic Australian “Carpet bagger” topped with crumbed oysters and parsley, and the Africa burger that features the spiced fruits of Cote D`Ivoire and Ghana with chilli spiked pineapple and fried plantain salsa.

Go for Gold: The burgers will be served with fries, The Distillery’s signature red cabbage and cucumber slaw, and their very own craft beer for only £12. Bargain. 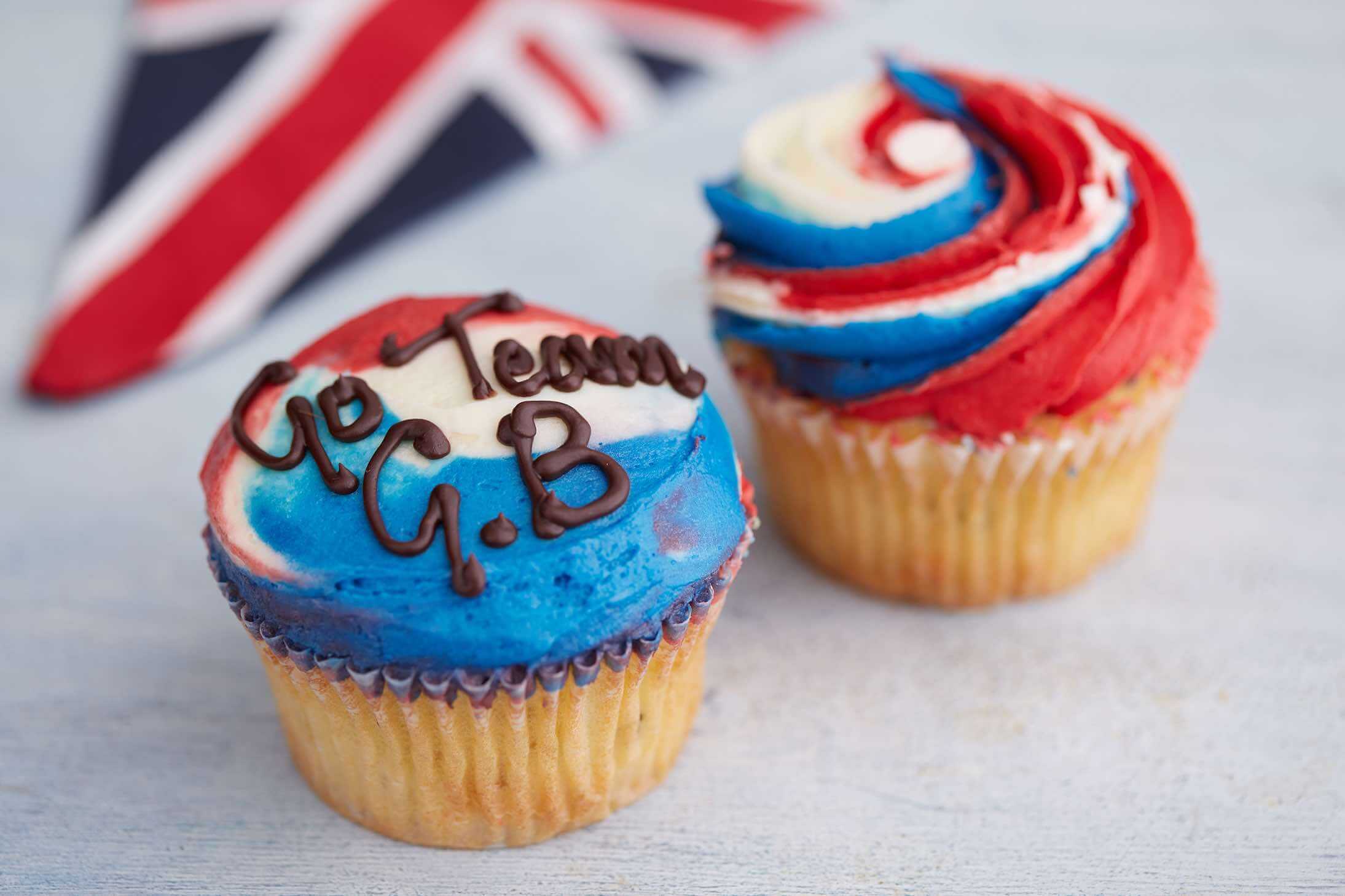 What: Lola’s Cupcakes are flying the flag with their limited edition cupcakes. Choose from vanilla and chocolate sponges, and a choice of either chocolate buttercream or coloured vanilla buttercream. Dependant on cupcake you buy, they’re decorated with sugar paste and ganache writing.

Go for Gold: We may have eaten our fair share of Lola’s Cupcakes, and we’ll let you know this – their red velvet one takes some beating. 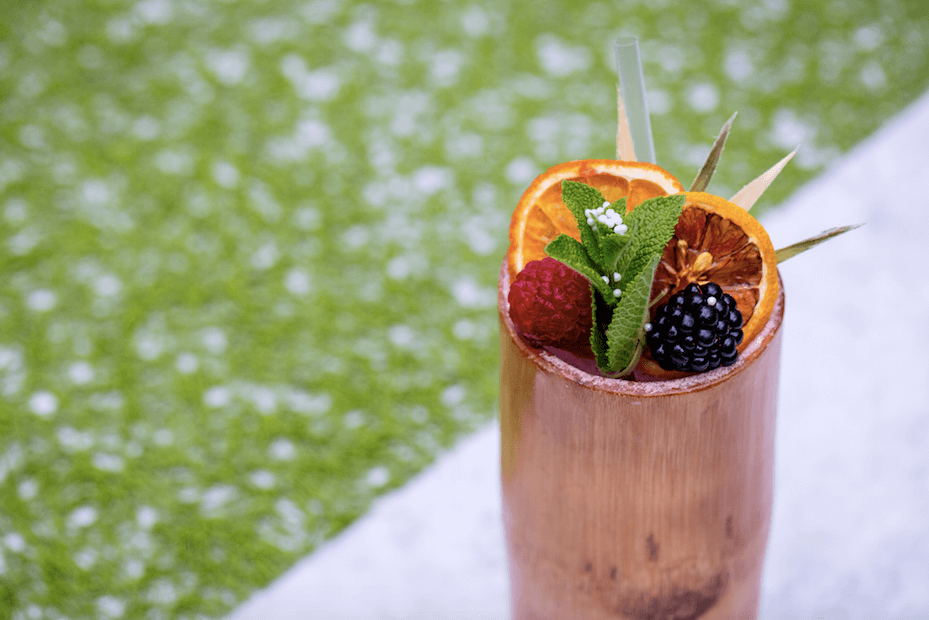 Go for Gold: Soak up the alcohol with their BBQ pork belly and red cabbage slaw, or the meaty homemade burger with smoked bacon and pickles. Brunch of champions. 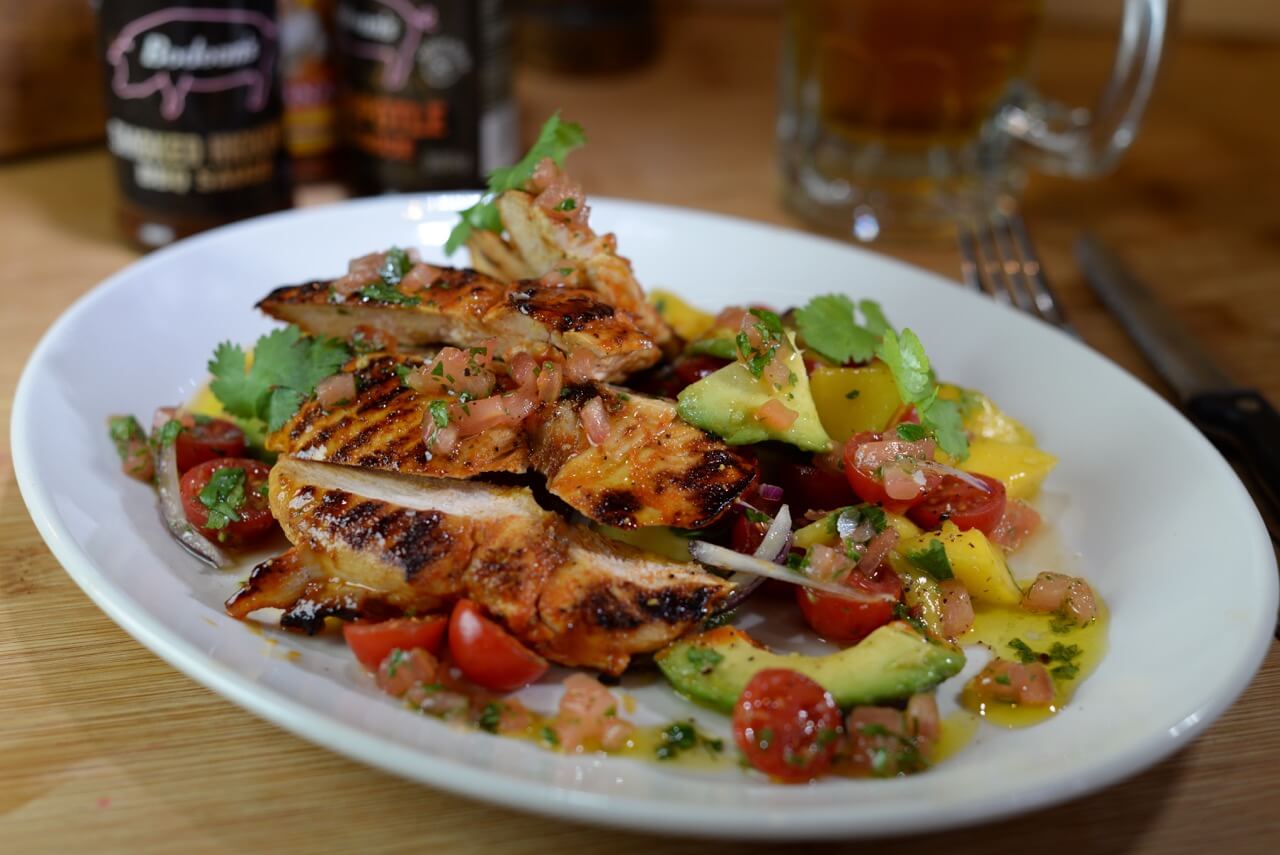 What: Bodean’s BBQ is offering a game-changing Brazilian barbacoa dish and a Rio-inspired cocktail for just £15, available at all seven locations throughout the Olympic season. Set the hunger torch alight with the protein-rich grilled Chicken Churrasco, served alongside a vibrant tomato and mango salad. Rehydrate with an exotic passion fruit or Raspadilla Caipirinha, or choose a heady Batida with plenty of crushed ice, both perfectly blended with Abelha Cachaca straight from Rio de Contas.

10. For a Special Cocktail: K Bar at The Kensington 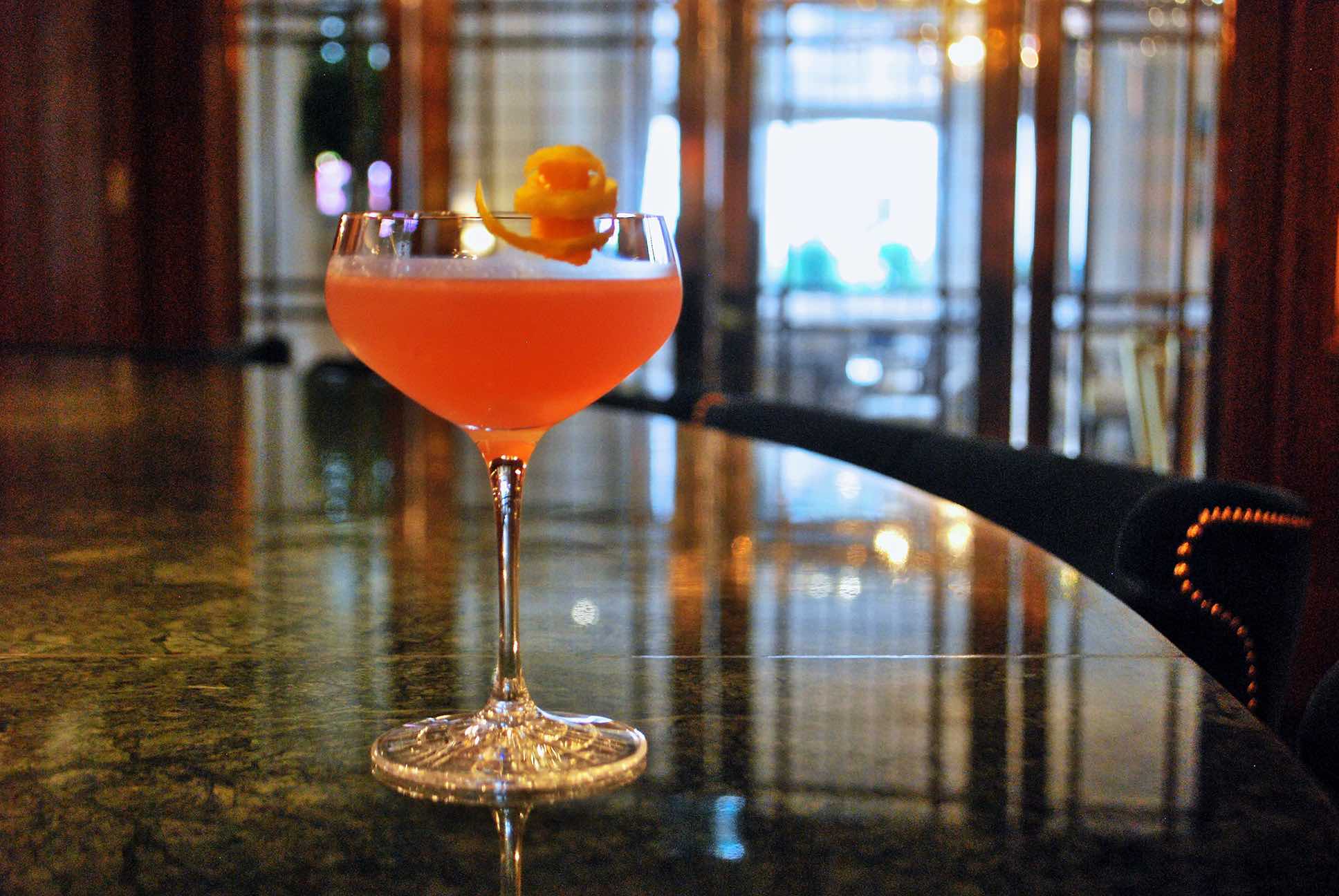 What: The Kensington have created a bespoke cocktail  ‘Just a Little Samba’ to bring a slice of Rio to South Kensington. Available from until the 21st August, the Just a little Samba, created by award-winning bar manager Ben Manchester, is a fruity little number made with Cachaça, Cointreau, Frangelico, cranberry juice and lime juice.

Go for Gold: The Iberico ham croquettes with crispy squid and Romesco sauce are the perfect bar snack bite. 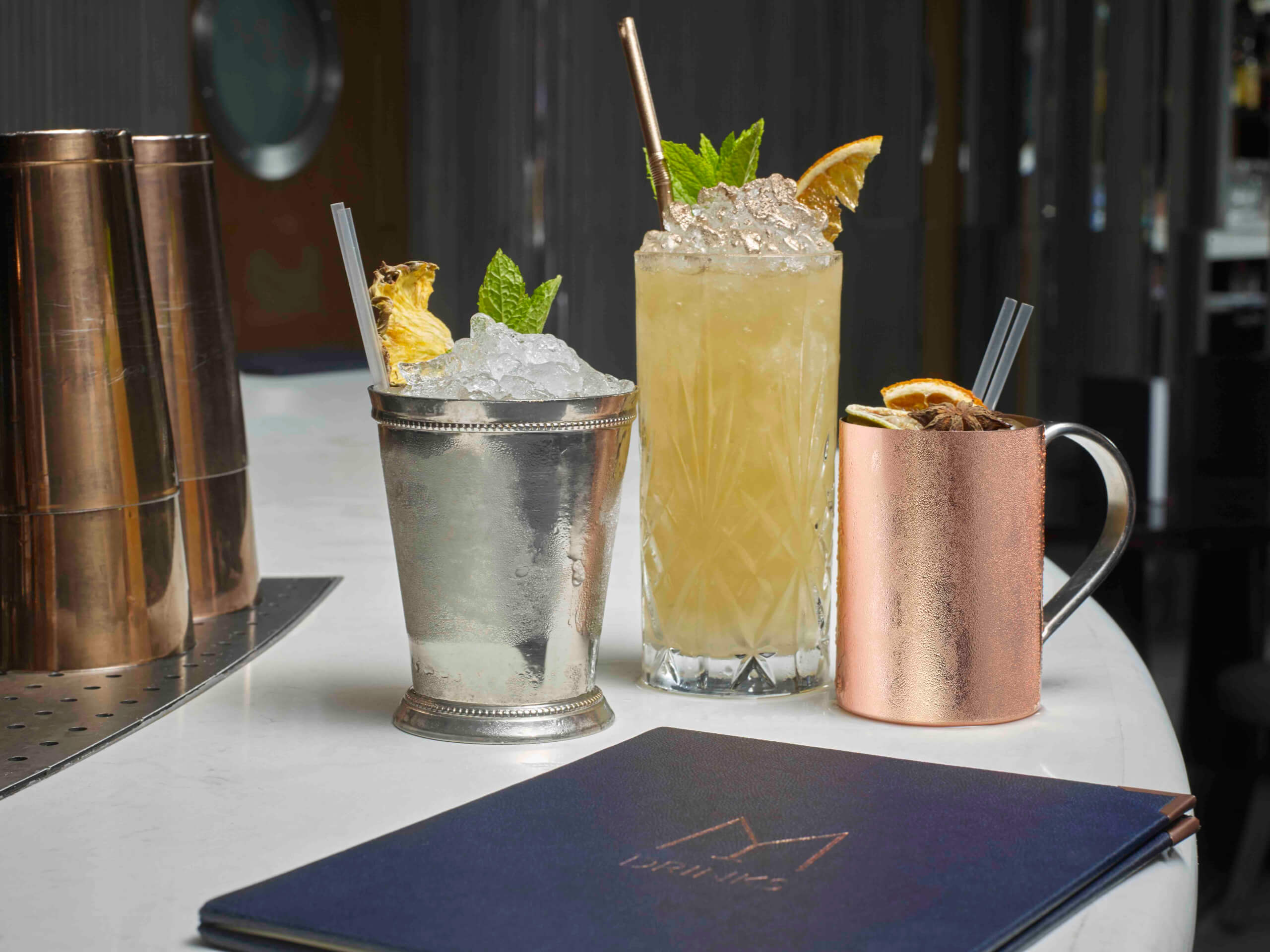 What: The May Fair Bar is offering special Bronze, Silver and Gold themed cocktails in time for the world’s greatest sporting event. Coming in at first place and scooping the Gold is May Fair Bar’s Fire and Gold. Served in a tall glass, the cocktail combines Maker’s Mark bourbon with homemade ginger syrup, rhubarb cordial, muddled orange, and lemon and mint. Next up for the Silver edition, comes the Swizzle’ filling an impressive Silver Mug, the team have mixed Doorly’s 5 year old rum, spiced almond Falernum, lime, tea pot bitters and a dash of pineapple juice.

Go For Gold: Last, but by no means least, the Bronze – Berkeley Punch, with a double rum combo of Chairman’s Reserve and Havana Club 3, combined with Ferrand orange curacao, lime, guava juice and the delectably tasty homemade fiery ginger syrup.

Where: The May Fair, Stratton St, London W1J 8LT 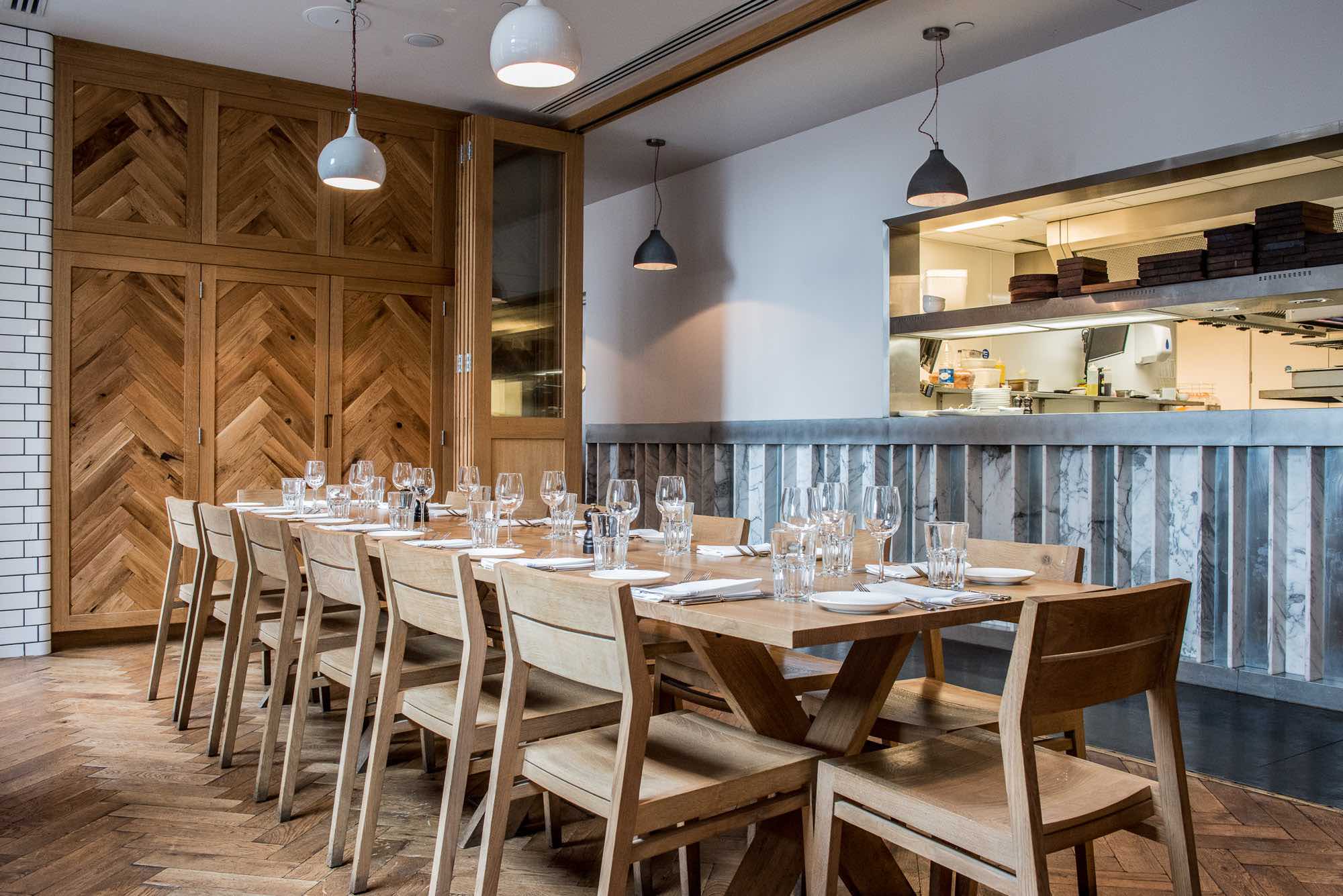 What: Tom‘s Kitchen restaurants across London have created a range of packages that will give everyone the perfect setting to watch the Olympics this year. The restaurants in Chelsea, Canary Wharf and St Katharine Docks all have private spaces available, where you can enjoy exclusive screenings, and the team have also created a range of food and drink packages to be shared with your pals. Sponsored by the Whitstable Bay Brewery, tuck into a set menu that includes two glasses of house wine or Whitstable Bay Blonde Lager accompanied by eight large canapes each for £25 per person.

Go For Gold: Go all out and order the dinner package, which includes two glasses of house wine or Whitstable Bay Blonde Lager, four pre-dinner canapes and a three-course set menu for £50 per person.

13. For Bacardi Cocktails: The Refinery Bankside 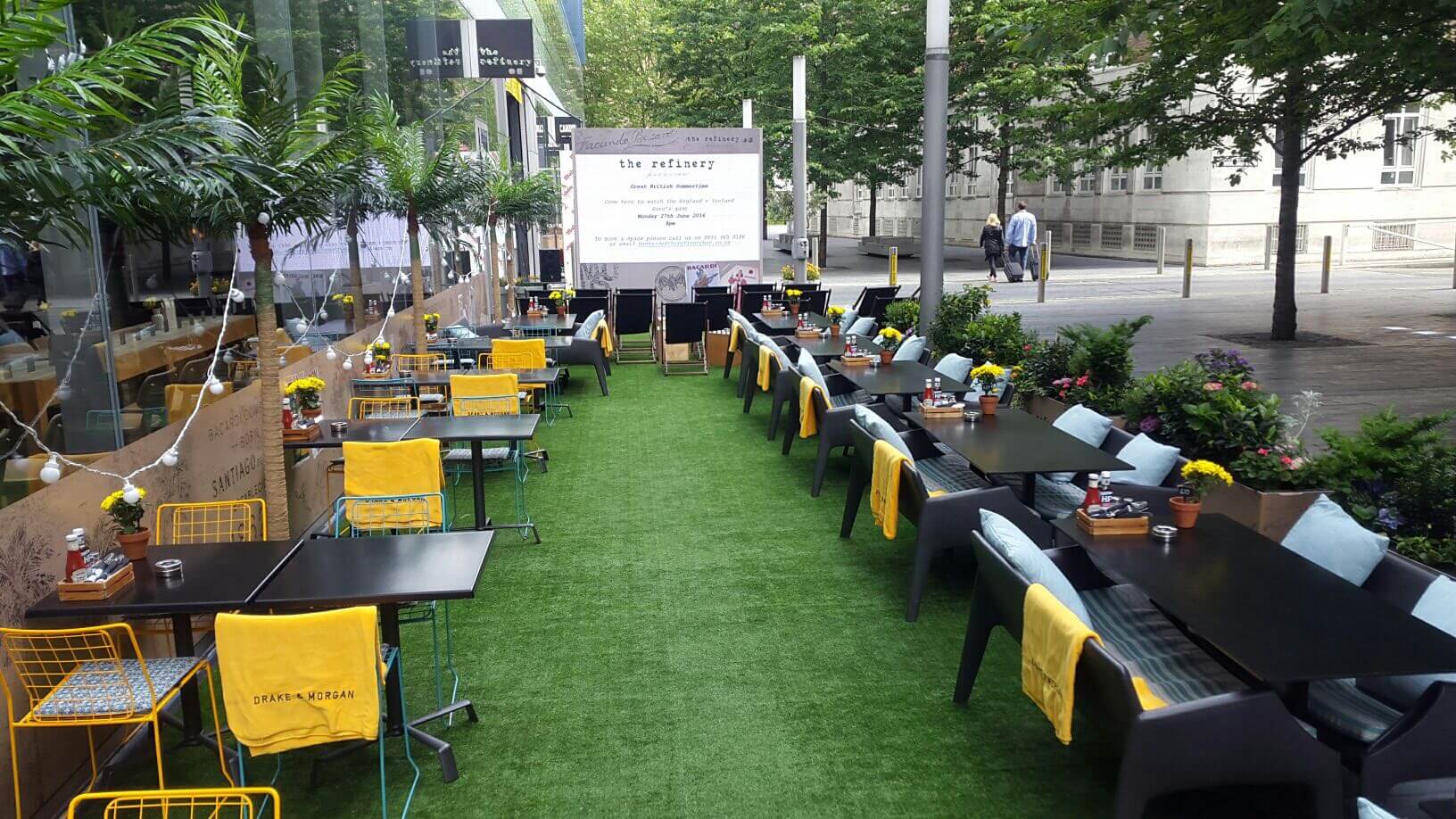 What: The Refinery Bankside has teamed up with Bacardi to launch its annual Great British Summer pop-up and super-sized outdoor screen on the terrace; this year with a Latin twist. Until 31st August, the terrace, adorned with palm-trees and relaxing deck chairs will transport you to a holiday hot-spot with the Latin-American themed screen featuring colourful heritage adverts on a Cuban street-inspired white brick wall. Sensational serves from Bacardi include: The Feisty Rum Punch made with rum, aromatic bitters, red wine and cranberry juice; Green Tea Punch including rum, Sencha tea, mint tea and lime juice; and Maid in Cuba with rum, lime, cucumber, mint and Absinthe rinse.

Go For Gold: The MojitoColada is a mash up of ingredients from the classic Pina Colada and mojito, obviously. This a fusion cocktail featuring an exciting mix of rum, pineapple, mint, lime and vanilla sugar.

14. For a Greek Feast: The Real Greek 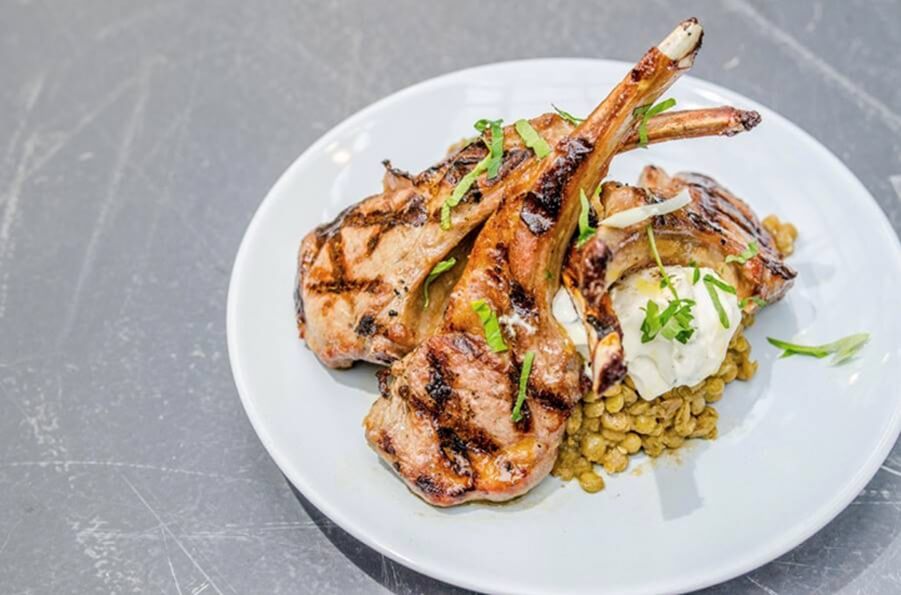 What: In celebration of the summer of sport, The Real Greek are offering an exclusive Ancient Greek Menu, bringing the food of the 8th Century B.C. to modern-day Londoners. The menu will be available between the 5th and 21st August  at The Real Greek Westfield Stratford City only, the home of London 2012. On the menu is grilled lamb cutlets, served with lentils and minted Greek yoghurt, and their signature falafel, served with a spicy yoghurt and tahini dip, pickled cabbage, and tomato and onion salsa.

Go For Gold: Veggies can tuck into the vegetable stack – layers of grilled aubergine, fresh tomato and spicy feta dip (Htipiti), finished with a balsamic glaze. 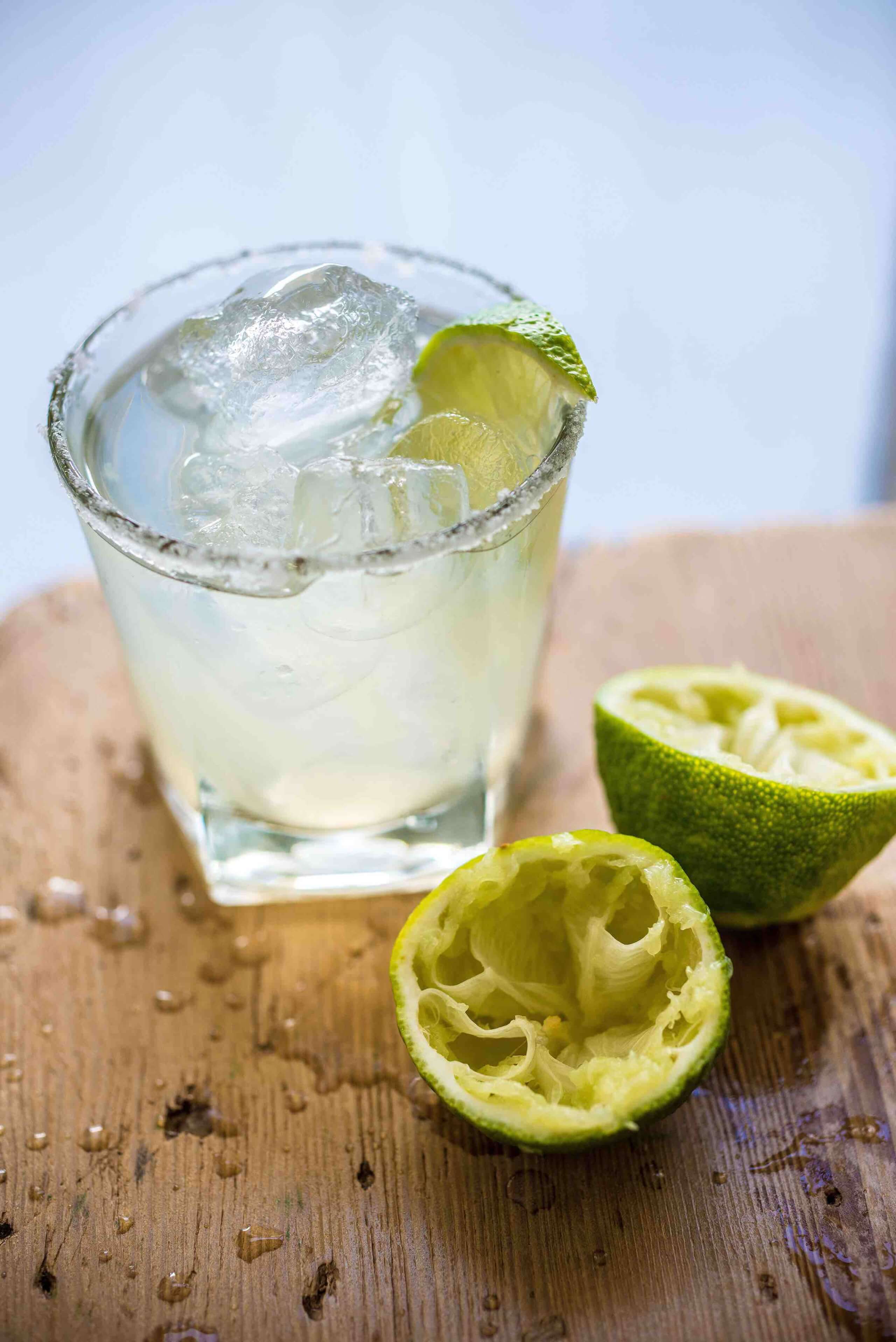 What: From Friday (12th) to Sunday (14th), on what’s expected to be the most successful sporting weekend for Team GB, caipirinhas, caipiroskas and Brazilian cervejas will be the order of the day accompanied by some Brazilian BBQ street food. The alfresco grill will be serving top quality South American beef, fresh fish, free-range pork ribs and a selection of salads. They will also be serving shots of Santa Teresa 1796, regarded to be South America’s best rum.

Go For Gold: The gastropub is home to over 20 rums and cachaças – let’s get drinking.

For a Celebratory Drink: Kopparberg 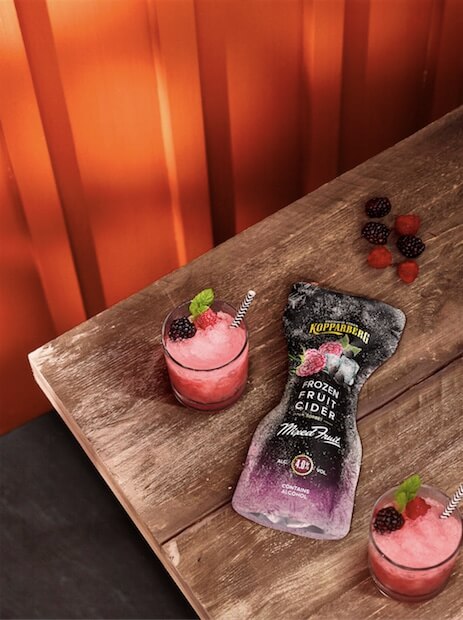 Go For Gold: Frozen cider not your thing? Try Kopparberg Fruit Lager, a new drink which bottles Kopparberg’s fruit flavour in a lager for the very first time.