Here at About Time Magazine HQ, we’re on a mission to spread a little savoury joy to celebrate the greatest day of the year  Pancake Day. Here are the best savoury pancakes this city has to offer. Flipping amazing:

1. For a Fish Pancake: The Botanist Sloane Square 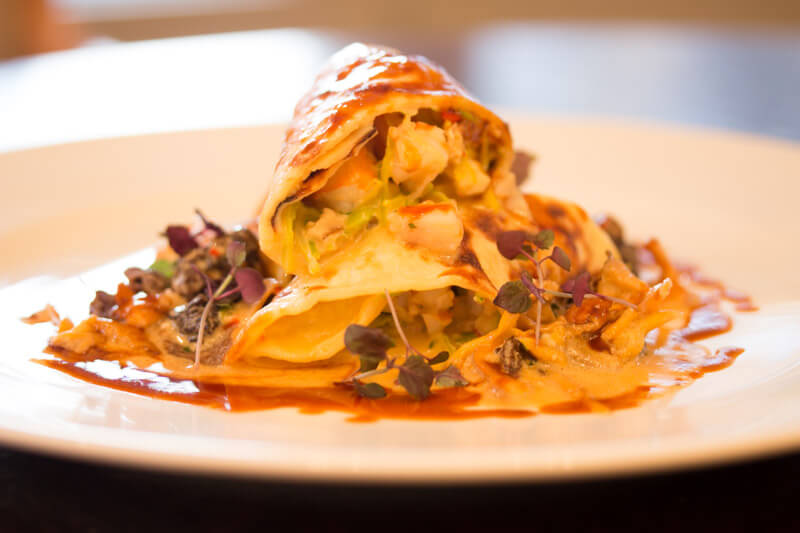 Why: The Botanist Sloane Square are know for three things: heady cocktails, modern British food and European dishes. The blueberry buttermilk pancakes with smoked streaky bacon and maple syrup are a firm favourite on their breakfast and weekend brunch menu, but it’s their latest pancake that has our attention. For Pancake Day, they’ve created a lobster pancake with all the trimmings available for lunch and dinner on Tuesday 9th February and they are flipping amazing.

2. For a Lobster Pancake: Tom’s Kitchen 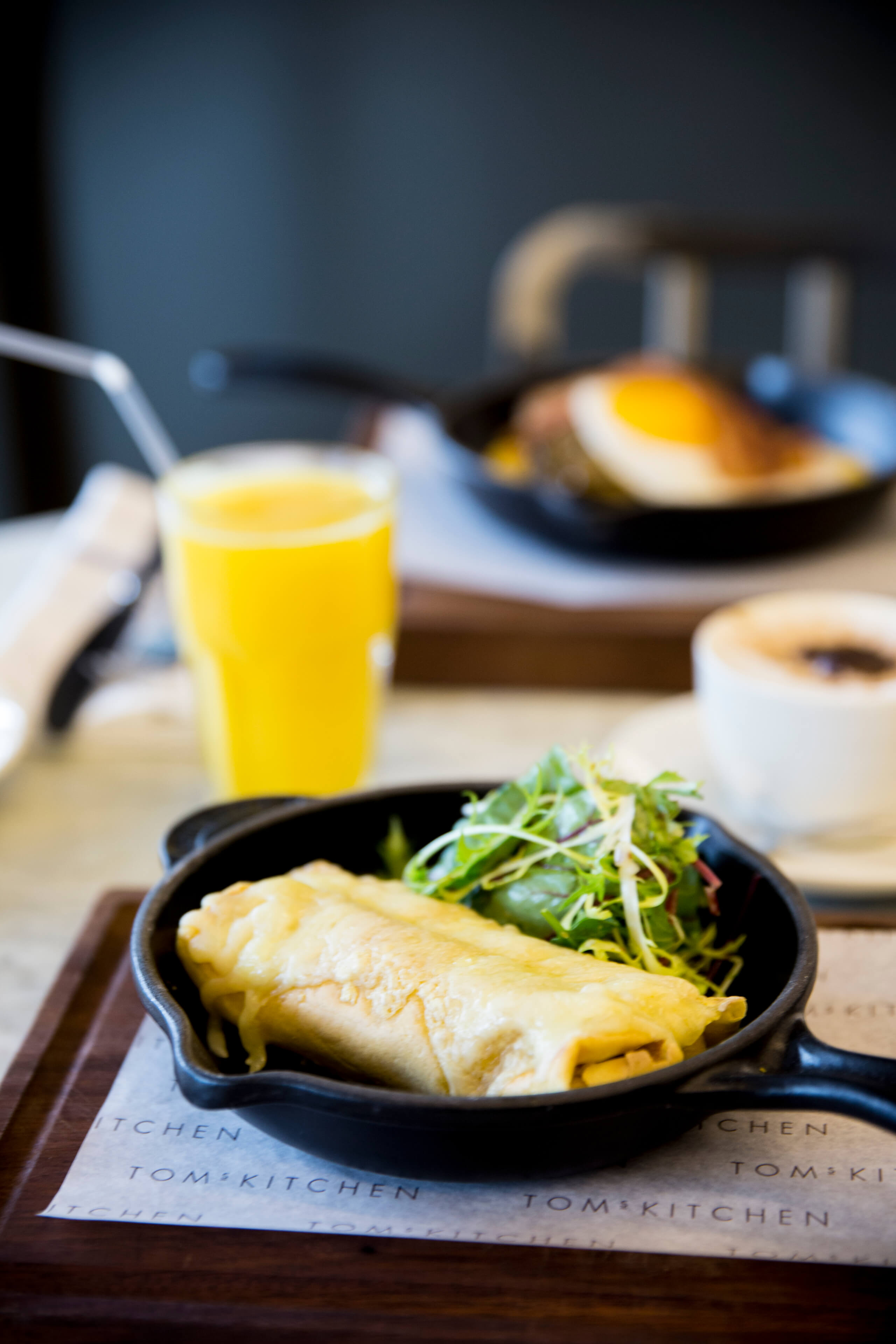 The Pancake: Lobster pancake with grain mustard and cheese (£18)

Why: Tom’s Kitchen restaurants use the finest British ingredients to create menus that are served in a relaxed and informal environment. The restaurants in Chelsea, St Katharine Docks, Canary Wharf and Somerset House, are getting into the pancake swing with a delicious selection of pancakes available for lunch and dinner on Tuesday 9th February. Choose from the lobster pancake with grain mustard and cheese or the potato pancake with duck egg and mushroom ragout.

3. For a Meaty Pancake: Shotgun 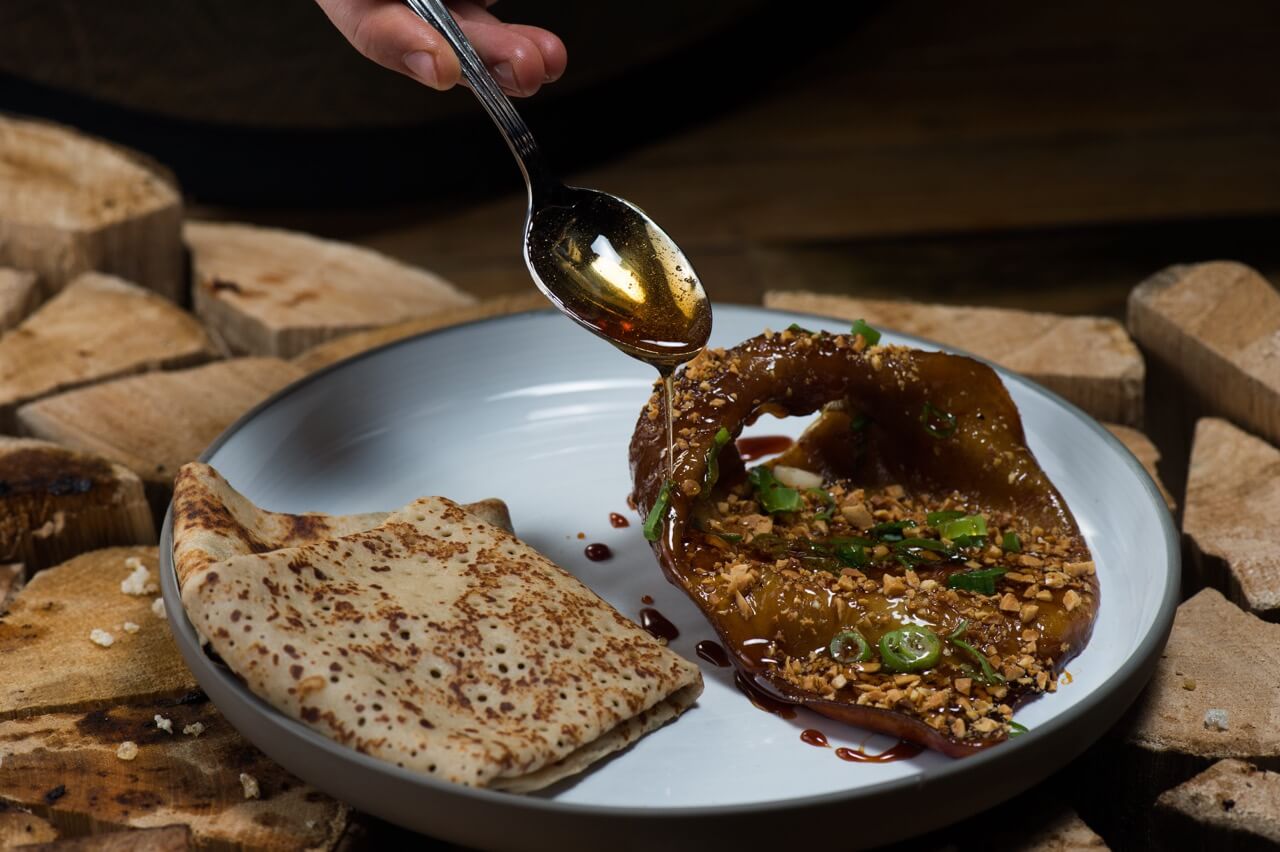 Why: The team behind London’s premier American restaurant The Lockhart in Marylebone are at the helm of Soho’s latest opening, Shotgun. Leading the culinary direction is Mississippi-born chef Brad McDonald, bringing his authentic approach to barbecue alongside a cocktail lounge and celebrating the rich cultural heritage of the Southern US. The menu is a meat feast – think, hot sausage and sauerkraut, pork belly, Dexter brisket from Finclass and BBQ baked beans. Just don’t leave without trying the pig’s ear with sour pancakes. Seriously.

4. For an Indian Pancake: Darbaar 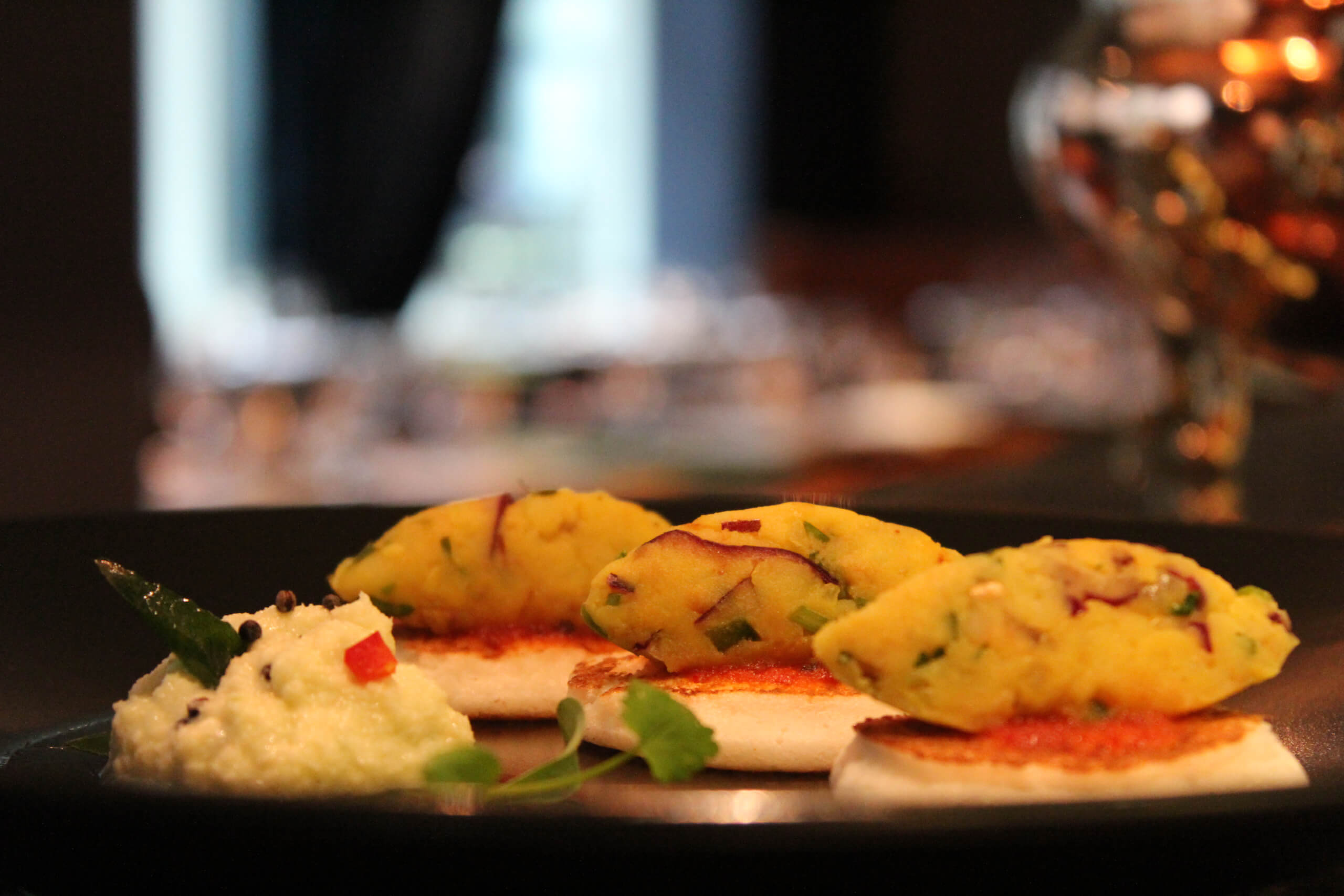 Why: Darbaar by Abdul Yaseen offers a sharing dining experience inspired by the banquets of the Indian Royal Court. To celebrate Pancake Day, Darbaar will be offering complimentary pancakes. Their fisherman style pancake is served alongside coconut chutney and will be available throughout the entire week. This canape sized pancake is also known as an uttappam in India, with toppings cooked right into the batter.

5. For a Pancake Pop-Up: Where The Pancakes Are 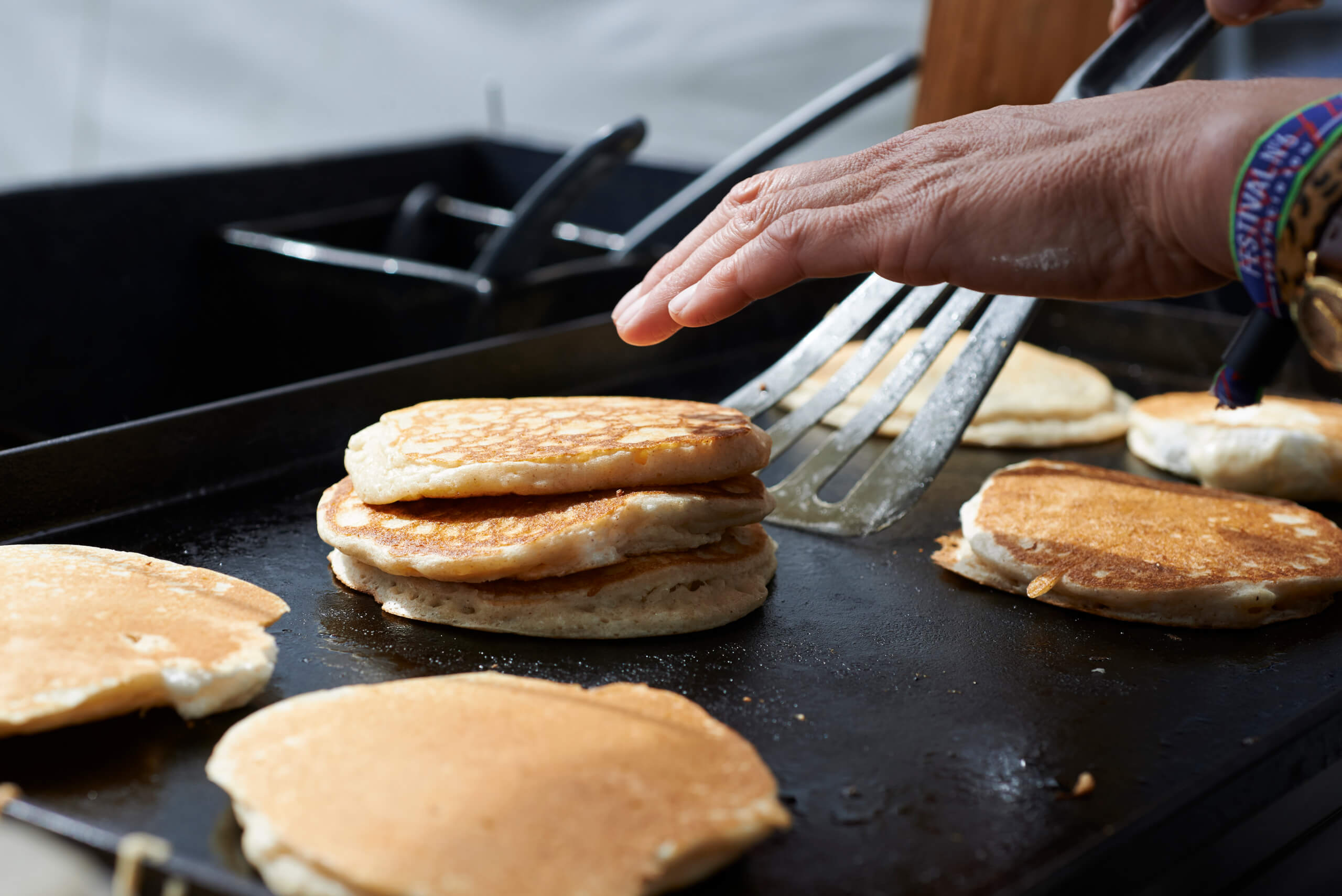 Why: WHERE THE PANCAKES ARE are popping up with their very first in-store restaurant at Habitat on King’s Road. WHERE THE PANCAKES ARE uses carefully sourced, nutrient packed ingredients including an organic flour mix with cholesterol lowering buckwheat, probiotic packed buttermilk and high welfare eggs before being topped with a range of toppings with a seasonal, slow food ethos inspired by Californian, British and European favourites. There’s heaps of savoury and sweet stacks to choose from. Toal pancake win.

6. For a French Pancake: Blanchette 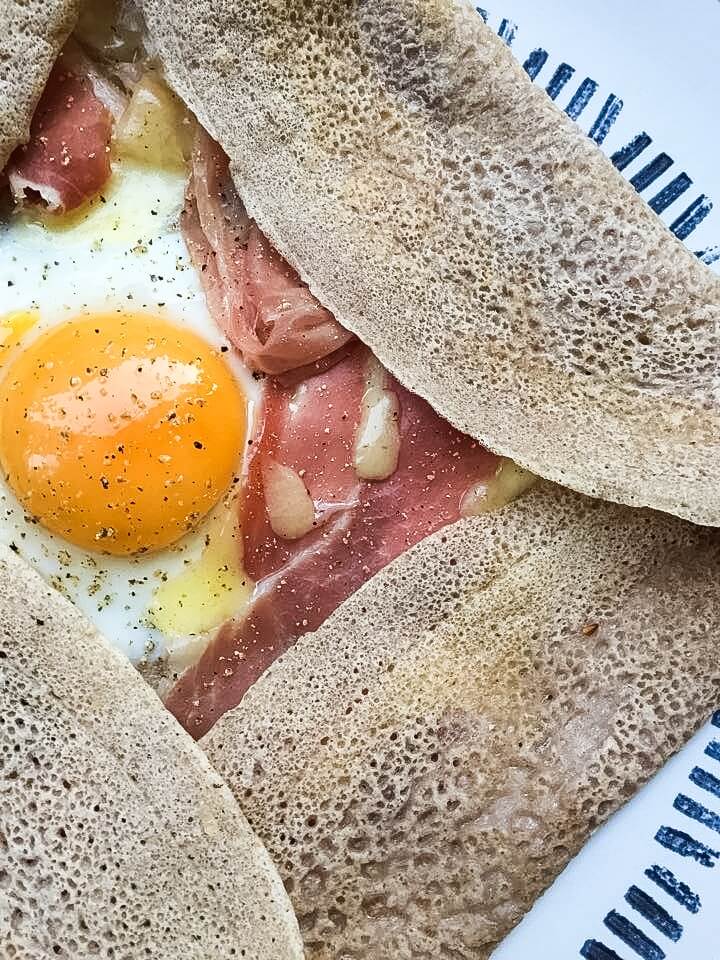 Why: To celebrate Shrove Tuesday, Parisian bistro Blanchette have partnered with French crêpe and galette specialists Les Deux Amies to host an all-day pancake pop-up. Founders Adeline and Caroline together with head chef Tam Storrar, will be whipping up fluffy crepes and galettes, offering both classics and Blanchette twists. Pancake fans will recognise the traditional ham, cheese and egg galette, whilst more creative examples will include a crepe filled with leeks, Fourme d’Ambert cheese and toasted hazelnuts. 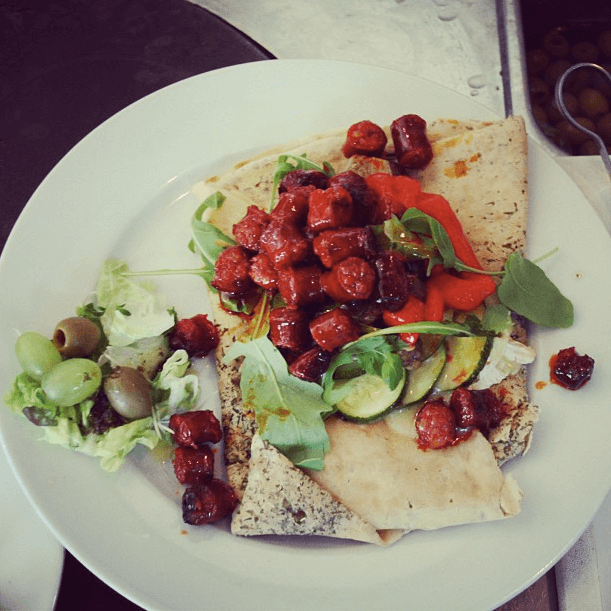 Why: Creperie Du Mondie is a creperie in Hackney with heaps of attitude. Opened in 201o, they knock up incredible pancakes all year round. We’re talking about an all breakfast pancake filled with egg, sausage – the whole nine yards. The Le Parisenne is a combination of goat’s cheese and walnuts, and the flavours of Mexico features chicken breast, guacamole, jalepeno and cheese. They also bang out insane sweet ones for all the Nutella queens out there.

8. For a Sri Lankan Pancake: Hoppers

Why: The siblings behind Michelin-starred Gymkahana and Trishna, two of the restaurants that redefined Indian dining in London, launched a new restaurant focusing on Tamil Nadu and Sri Lankan street food called Hoppers, opened last year. With Hoppers, the whole concept is a pancake – in this case  made with rice flour batter, with soaked and ground rice and coconut milk. They get their classic bowl shape from being cooked in a special wok-like pans called appachattis. 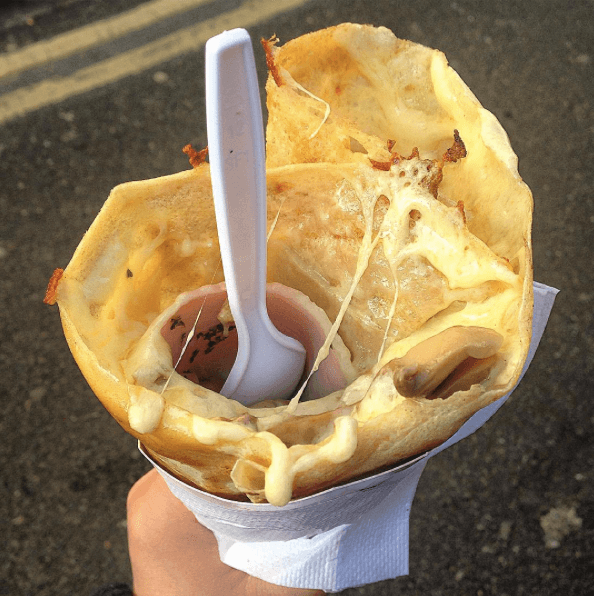 The Pancake: Mushroom and garlic cheese with a slice of ham (£5.80)

Why: The best crepes in London come out of a van. What’s brilliant at La Creperie de Hampstead, and makes people come back, is that nothing changes here – they’ve done the same thing every day, with top ingredients, a perfect French technique and a little know-how, and the results are always spot on. Creamy garlic-y mushrooms in a crepe – tasting is believing.

10. For a Spanish Pancake: Senzala 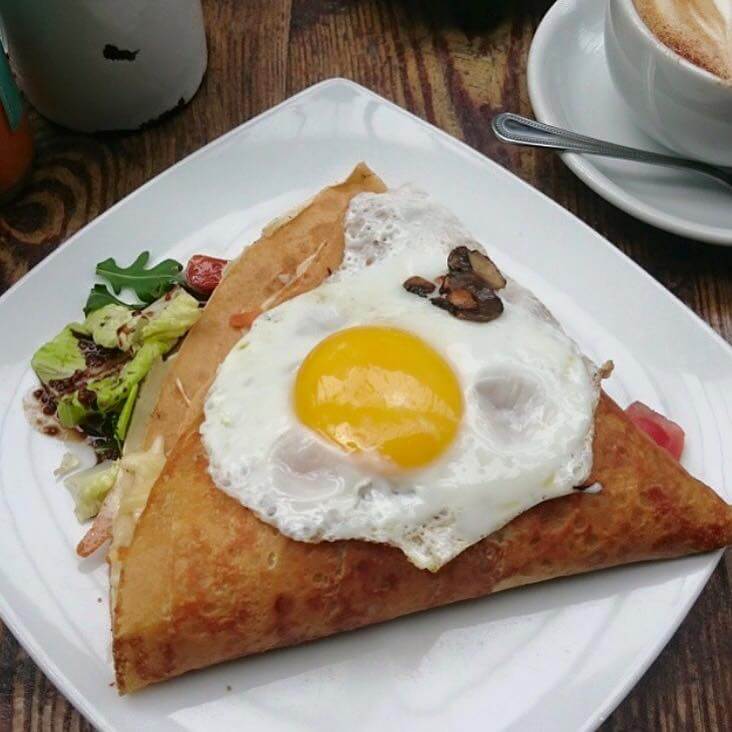 Why: All your crepe and pancake prayers are answered at Senzala – the best crepes in South London. This French creperie has bags of charms, sprinkled with a Brazilian twist. Come here on a weekend and order their Morning Glory – cheese, fresh tomatoes, crispy bacon and fried egg and a flat white. Utter perfection. They also cater for vegans (try the rosa squash), or go all out and opt for the banoffee – caramel, bananas, whipped cream, Belgian chocolate and toasted almonds. Good grief. 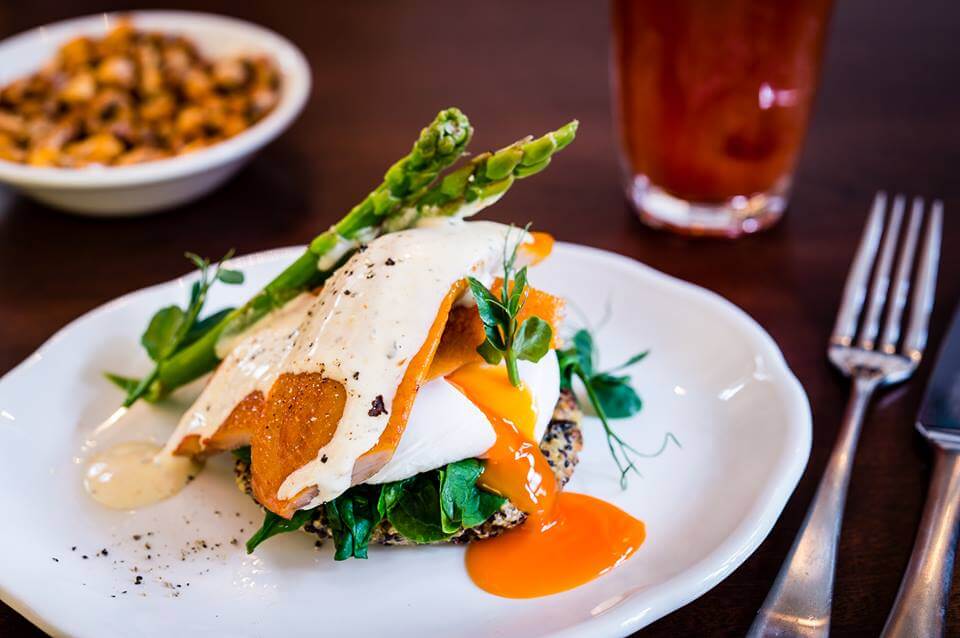 The Pancake: A savoury quinoa pancake topped with kipper, a poached egg, asparagus and a punchy Amarillo chilli sauce (£8)

Why: Ceviche Old St’s menu is inspired by the coast, Andes and Amazon of Peru with influences from Nikkei to criolla, Chifa to fusion using Peruvian superfood ingredients. Alongside fish and meat options, their menu includes many vegetarian options and most of of the menu is gluten free. On Saturdays and Sundays Ceviche Old St serves an awesome brunch from 11am – 4pm (alongside the main menu).  They have taken some good old British classics and given them a Peruvian twist. Their quinoa pancake is best washed down with a Pisco sour. 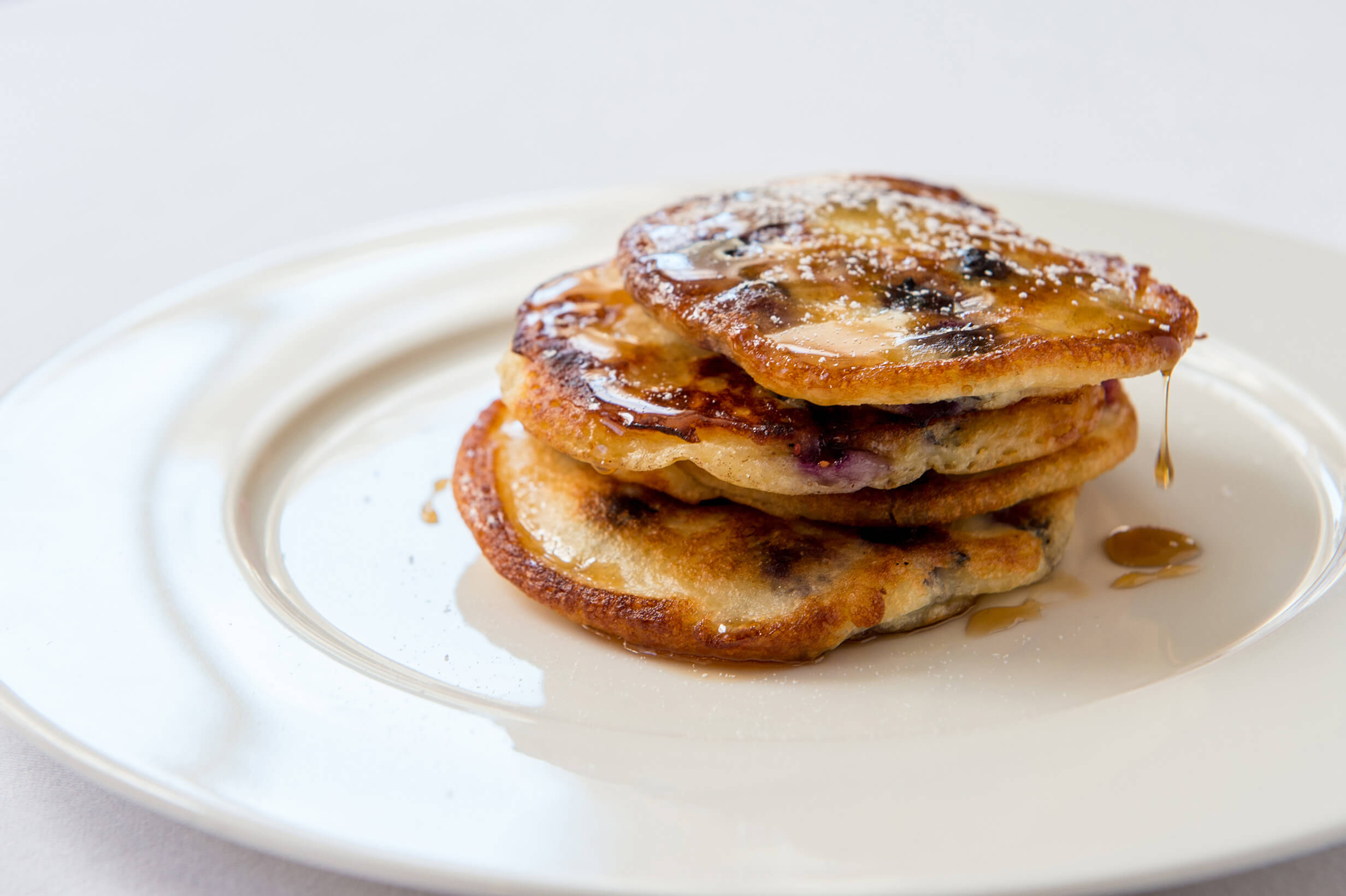 Why: Set in the heart of Marylebone, 108 Brasserie is all-day dining restaurant, cocktail bar and cafe. Specially for Pancake Day they’ve created four new pancakes including, The French – ham, fried egg, mushrooms and cheese, The Classic with lemon and sugar and The Exotic, a fruity pancake topped with passionfruit, mango and coconut. Alternatively, throw caution to the wind and order the Nutella and banana.

13. For a Vegetarian Pancake: L’Escargot 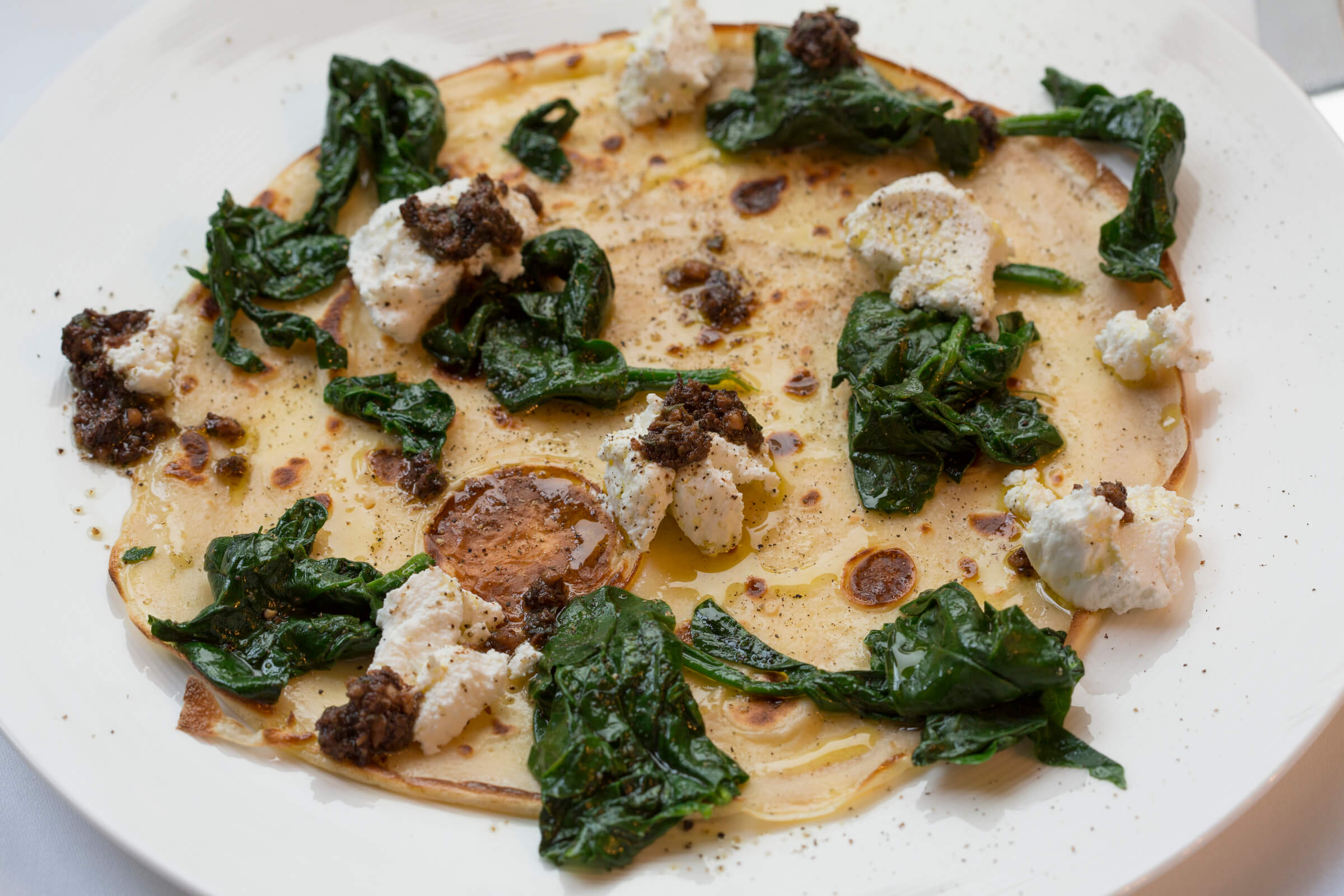 Why: L’Escargot in Soho is one of London’s most oldest and celebrated French restaurant. The menu is based on typical French cuisine, bourgeois in style, featuring some of the finest French delicacies including Lobster bisque, moules marinieres and steak Tartare. The guys at L’Escargot aren’t just celebrating Pancake Day, but Pancake Week. On the menu is; smoked ham and Gruyere cheese, spinach and wild mushroom, Suckling pig crêpe, lobster thermidor and other sweet treats.

14. For a Crab Pancake: Ask For Janice 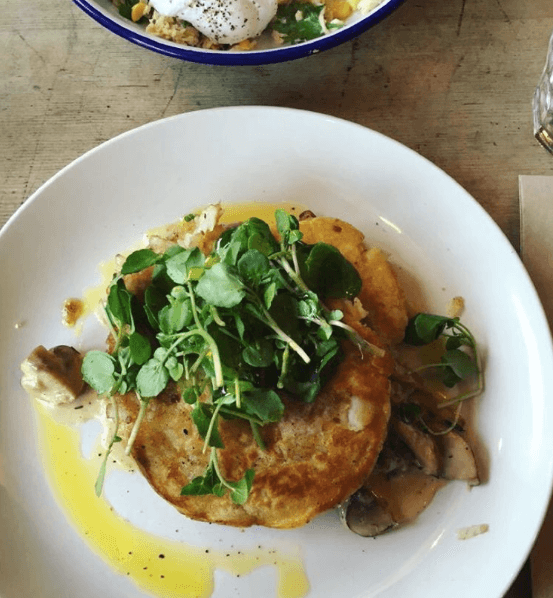 Why: Ask for Janice will be serving lip-smacking pancakes till they’re gone this Pancake Day. And when they’re gone, they’re gone. Refreshingly, and in keeping with their imaginative British food menu, AFJ’s pancakes are mainly a savoury affair. The menu includes Brixham chilli crab, ham hock and cider apple, as well as black pudding and fried duck egg.

15. For an Avocado Pancake: Shutterbug 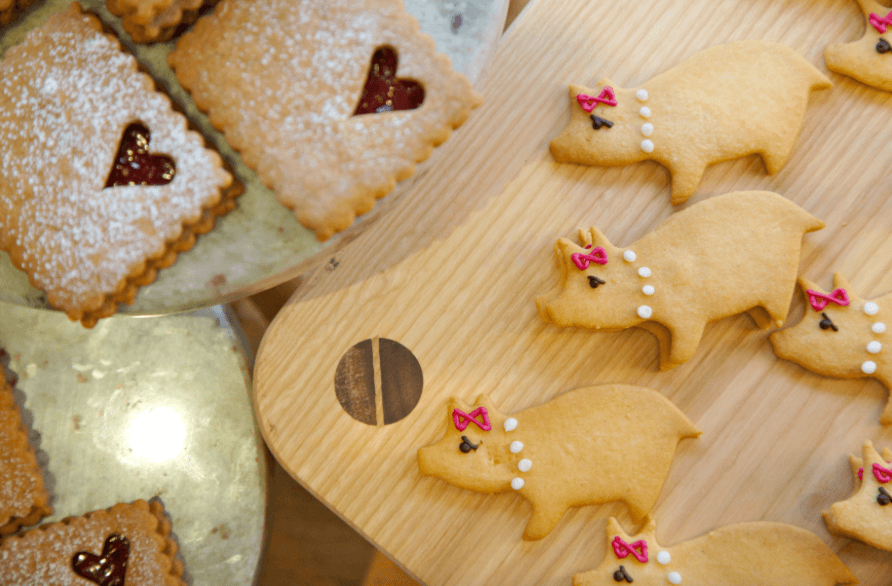 Why: Shutterbug is a cocktail bar and creperie hidden in the heart of Shoreditch, serving traditional French crepes by day and fast becoming one of east London’s hottest nightspots, thanks to its bespoke cocktails, large private courtyard, killer sound system and resident DJs from local record shop LoveVinyl. Come for their amazing pancakes, like this total avocado dream.