There’s a certain nervousness when one of the best chefs you know flies into London for one evening only. Luckily for me, I live within walking distance of what might just be the nicest foodie street in the capital. There’s no shortage of great restaurants on Exmouth Market, with a buzzing atmosphere and no cars – it’s usually only the weather you have to worry about. Berber & Q, Morito and Caravan already provide very reliable spots for food and drink (provided you can get in), but this time I was here to try something new. 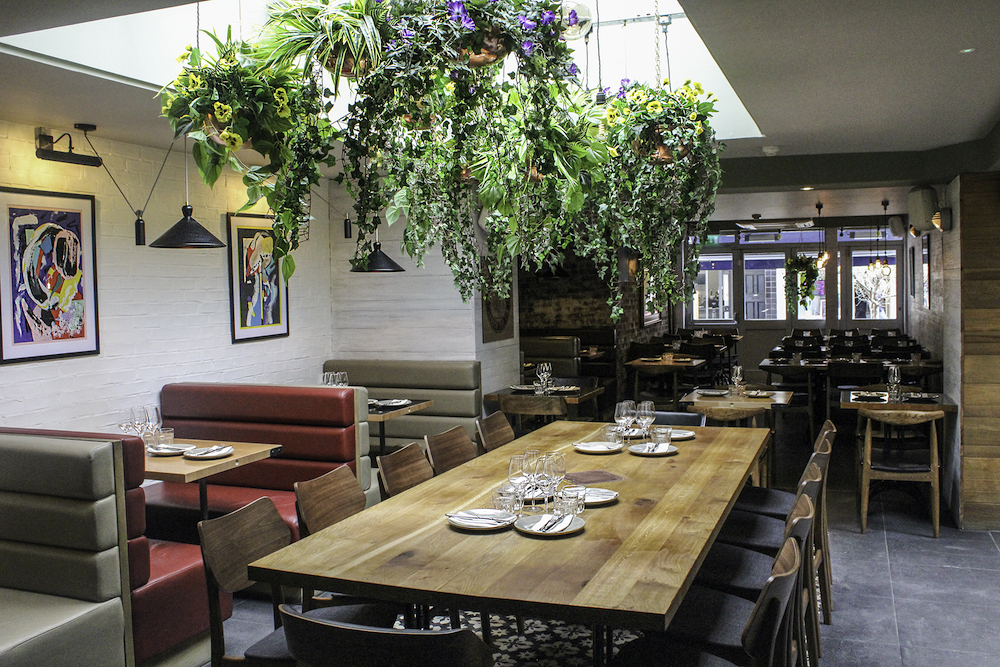 Portobello Road Gin, the team behind The Distillery, has just launched Tonica their brand new sister venue on Exmouth Market. Yes, I’d never been to the original restaurant, or even heard of the group behind it, but my thinking was, you wouldn’t go up against the likes of Moro or The Eagle unless you had something pretty good to offer, right?

Anyone who had been to the short-lived Celio Blanco at this site before will be familiar with the venue. A mixture of booths, and large tables in a 100 seater restaurant and bar that is a little more casual than some of its neighbours. The focal point of the dining area is a cascade of foliage and planters which are suspended from the venue’s ceiling. It has a relaxed atmosphere that at times, no thanks to the fairly base-y music, feels a little more like a bar than restaurant. 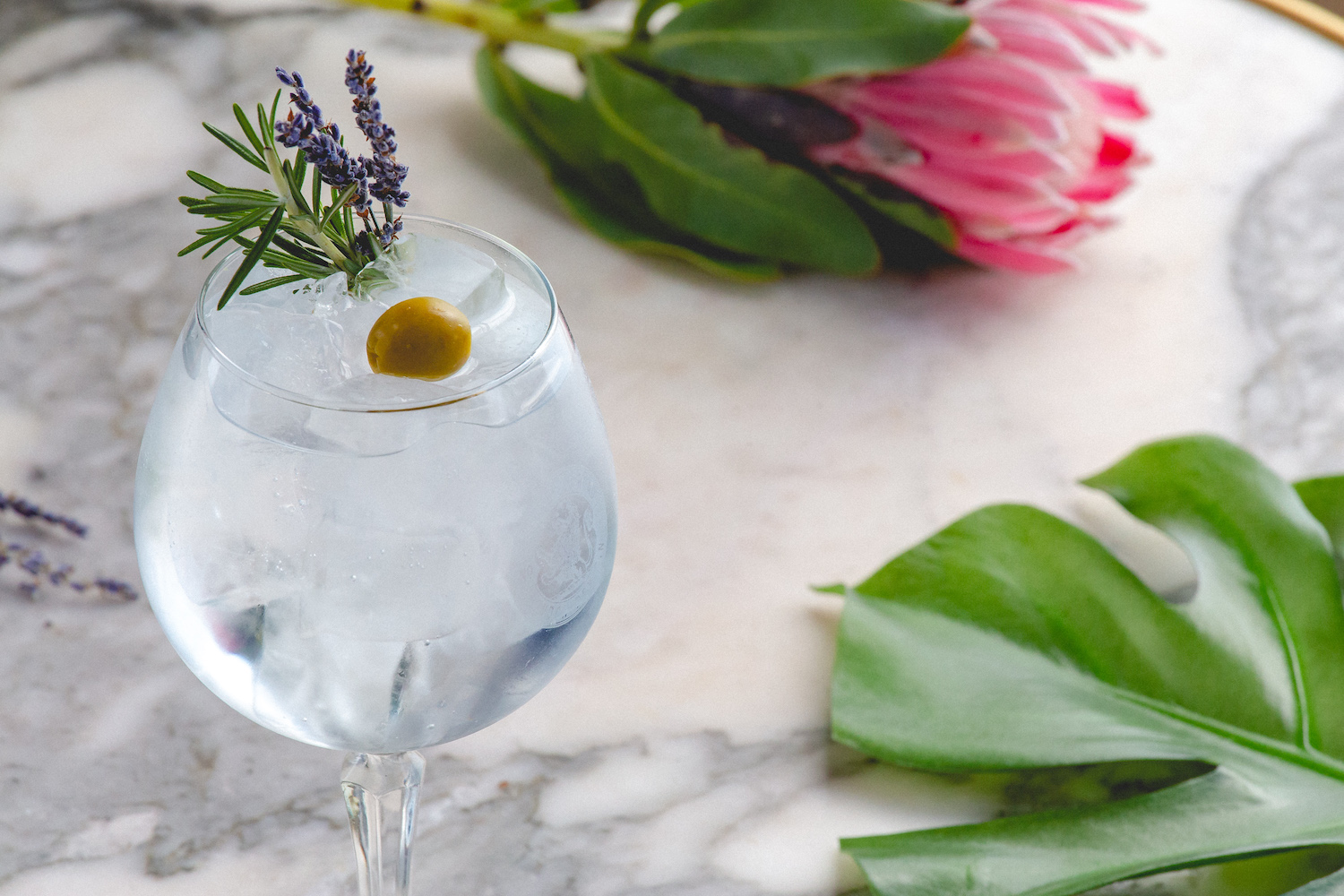 I wasn’t surprised when the waitress was quick to tell us about their speciality: Tonica’s Gin and Tonic Plus. They describe their gin and tonics as “blurring the lines between the traditional G&T and the cocktail; an experimental new serve that uses fanciful garnishes, interesting tonics, bitters, tinctures, fresh herbs, juices, jams and even liqueurs, to take the classic ‘spirit and mixer’ to dizzyingly delicious new heights.”

It’s a pretty punchy explanation for what I always thought was a pretty straightforward drink (the clue is in the name). That said, we followed their advice and soon enough came three giant multi-coloured goblets of gin. I looked over at my guest worried I may have bought them to a Marbella beach bar in the Market. How wrong I was. Turns out the Gin and Tonic can be elevated, and damn these drinks were delicious. Each one had its own unique flavour with subtle hints of orange or peppercorn adding an element of surprise. The Ngenious! was a winner, but followed closely by Nordes which featured hibiscus liquor and edible flowers. So far so good, but I wasn’t going to be able to win over my visitor with gin alone. 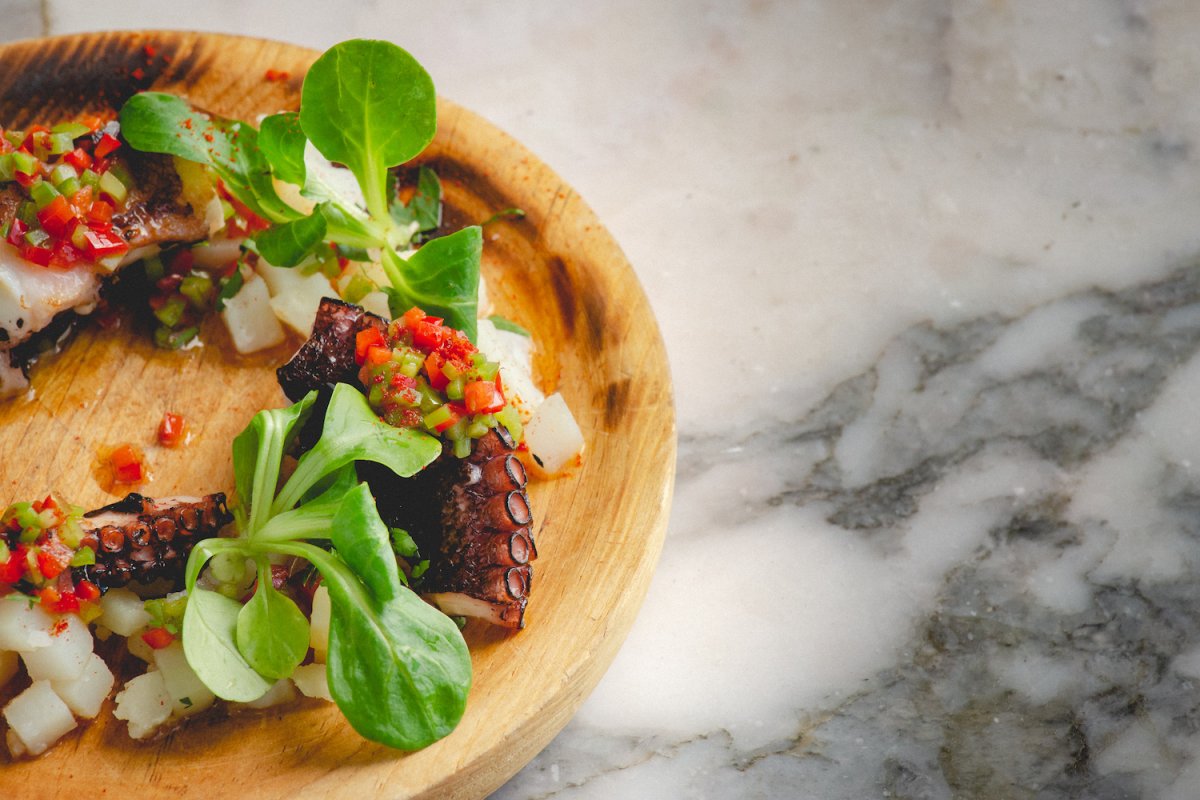 Tonica’s food offering is tapas and small plates, inspired by Spain’s vibrant culinary culture. They pride themselves on seasonality and use plenty of British produce married with imported Spanish delicacies. It’s a much more varied menu than you might expect; yes there’s patatas bravas and the ever-trendy Padron peppers, but there’s also plenty of things on the menu here that you may not expect from tapas in London.

We ordered croquetas, a selection of tapas and a plate of their signature Inka Roast Iberico pork. As soon as the first dish arrived I knew we were onto a winner. In fact, there wasn’t a single dish from what we ordered that I wouldn’t recommend. Everything we tasted was, just like the gin and tonics, tapas plus. The signature solomillo pork was cooked to perfection: tender and full of flavour. Amongst the tapas, the tortilla, smoked cauliflower and kale dishes all stood out as simple yet sumptuous Spanish cooking that more than stands up to any other restaurant in the area. The great thing about tapas is when done well it lends itself to such a fun, relaxed atmosphere – and halfway through even the music had grown on me.

As with a lot of sharing restaurants, the price can really depend on how hungry you are. The dishes here are fairly generous, but you’ll probably end up spending £40 a head if you want to taste a fair chunk of the menu and the gin and tonics too. That said, Tonica is well worth it and is a great addition to Exmouth Market. It’s fun, the service was great and most importantly – the food was delicious. With my important guest safely in the back of the cab I breathed a sigh of relief; sometimes it pays to give the newbies a go.

For more information on Tonica, visit the website here.