Texas Joe’s swung its saloon doors open a couple of weeks ago, and people are already queuing round the block. Texas Joe, a self styled cowboy from Dallas is behind the restaurant – a few years ago he dipped his feet into the food product pool when he pitched his Texas beef jerky in front of the dragons. It went swimmingly, Deborah was laughing, Joe was laughing and eventually Peter Jones invested. However, it all when to the dogs off camera when Peter pulled out. But that didn’t phase Joe, he, along with his jerky earned himself quite the reputation in the dried meat community. Fast forward to today and although this is Joe’s first venture into the restaurant business, he’s certainly no novice. Texas Joe’s is all about one thing: slow cooked meats. If you’re hankering for a taste of the deep South, in need of some meat loving, or quite simply, wanting a new restaurant to hit up, here’s what you need to know. Bring your appetite, because you’re going to need it: 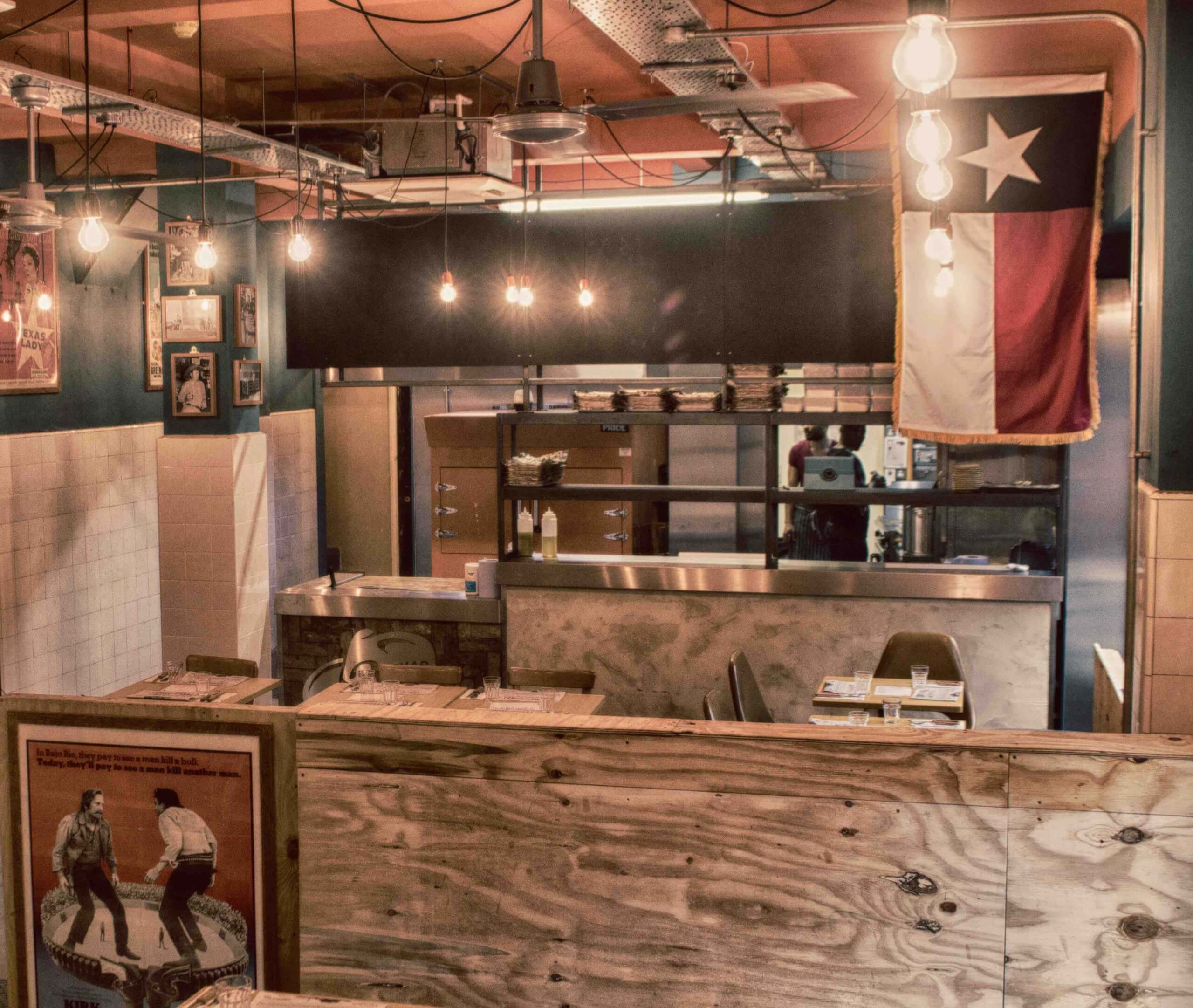 Let me set the scene. It’s a warm summer Tuesday evening and the place is pumping. Securing a table outside is like nabbing a ticket to Willy Wonka’s Chocolate factory; gold dust. Having only been open a couple of days, the word about Texas Joe’s has already spread. The restaurant is cosy, and by no means a large space – the open kitchen at the back works like clockwork – there’s chef cutting, smoking and frying. Texas Joe’s has thrown out the usual American cliches when it comes to decor, there’s no wood paneling, or ghastly checkered tablecloths. Instead, there’s industrial features, rough and ready vintage furniture and mocked up paintings of American barbecue stars. Every detail has been thought about, even the menu which is printed on a 1936 Texas Newspaper named The Big Smoke Signal. 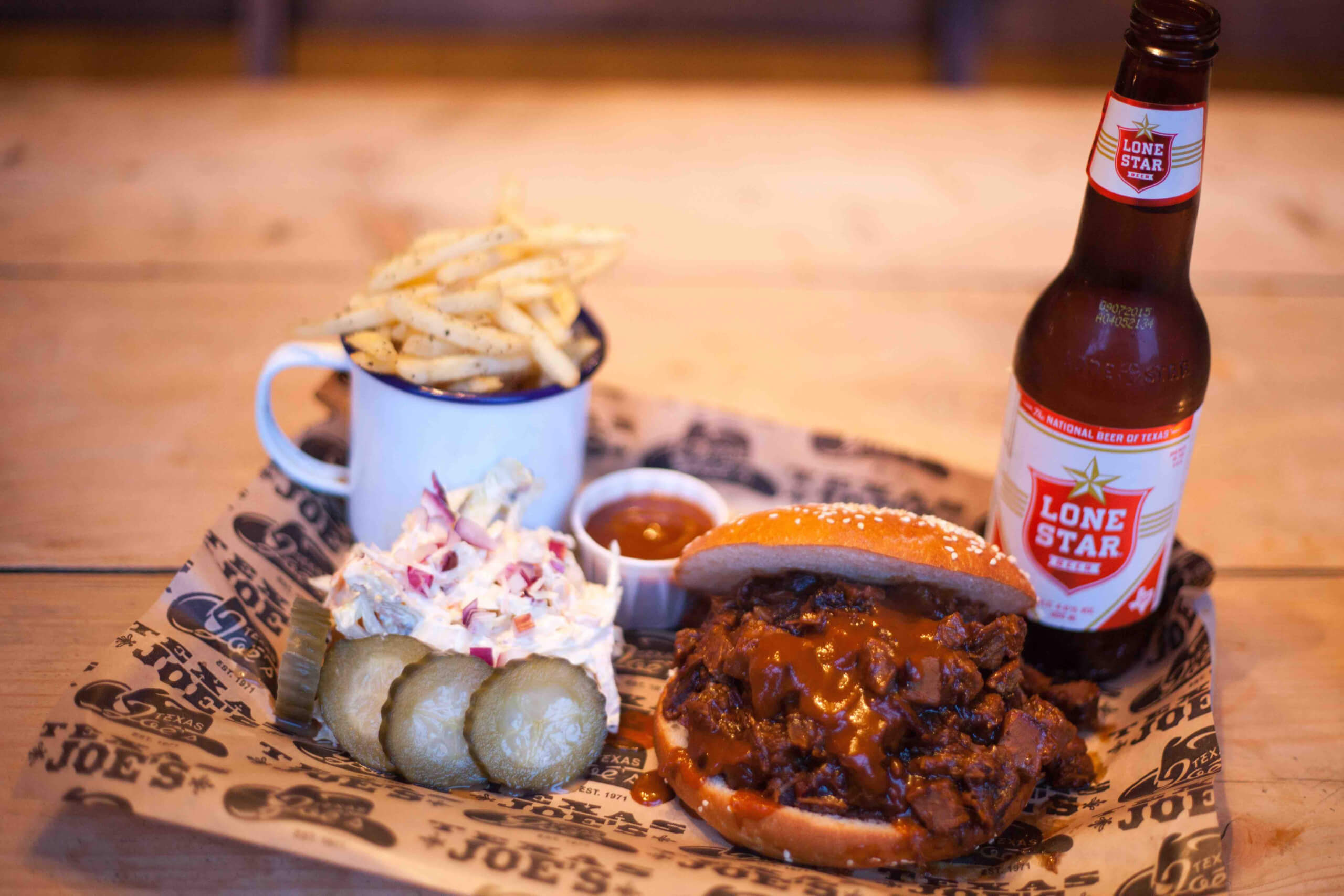 Oh my days. The food. Where to begin. Well, it only seems right to begin with the meat, which, by the way is slow smoked over English oak from London Log Company in a custom 500-pound capacity rotisserie. There’s many meats to choose from – pork, chicken and beef all feature on the menu. If you’re having trouble deciding, I recommend the beef brisket. Thickly cut slices of slow cooked beef, which is both juicy and tender. If you think there’s bad barbecue joints in London, you clearly haven’t been to Texas Joe’s, this is as authentic as it gets. The beef is served with a generous dollop of coleslaw and a few slices of white bread, giving a nod to the rustic casual dining scene back in Texas. 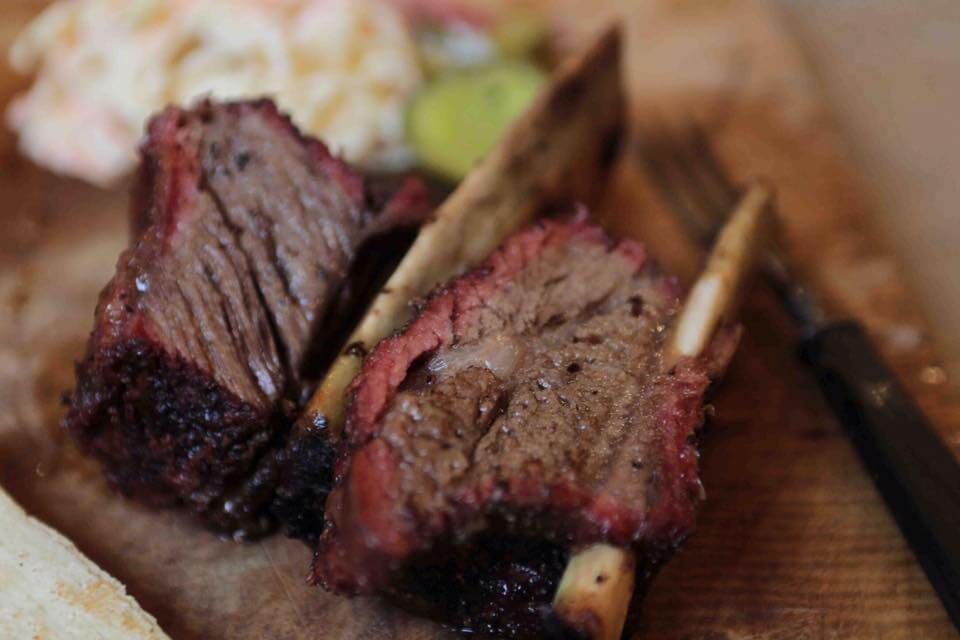 At £22, the beef short rib is by no means the cheapest dish around, but the portion is large. The meat on first touch literally falls off the bone, and is coated in a sticky, sweet glaze that elevates the meat to new tasty heights. It’s incredibly moreish – your trousers may become a lot tighter, but you can’t let this meat go to waste. It just feels wrong. Pork ribs are also a good shout. Don’t be that guy that eats ribs with a knife and fork, Texas Joe’s is all about ditching the cutlery in favour of your mitts. 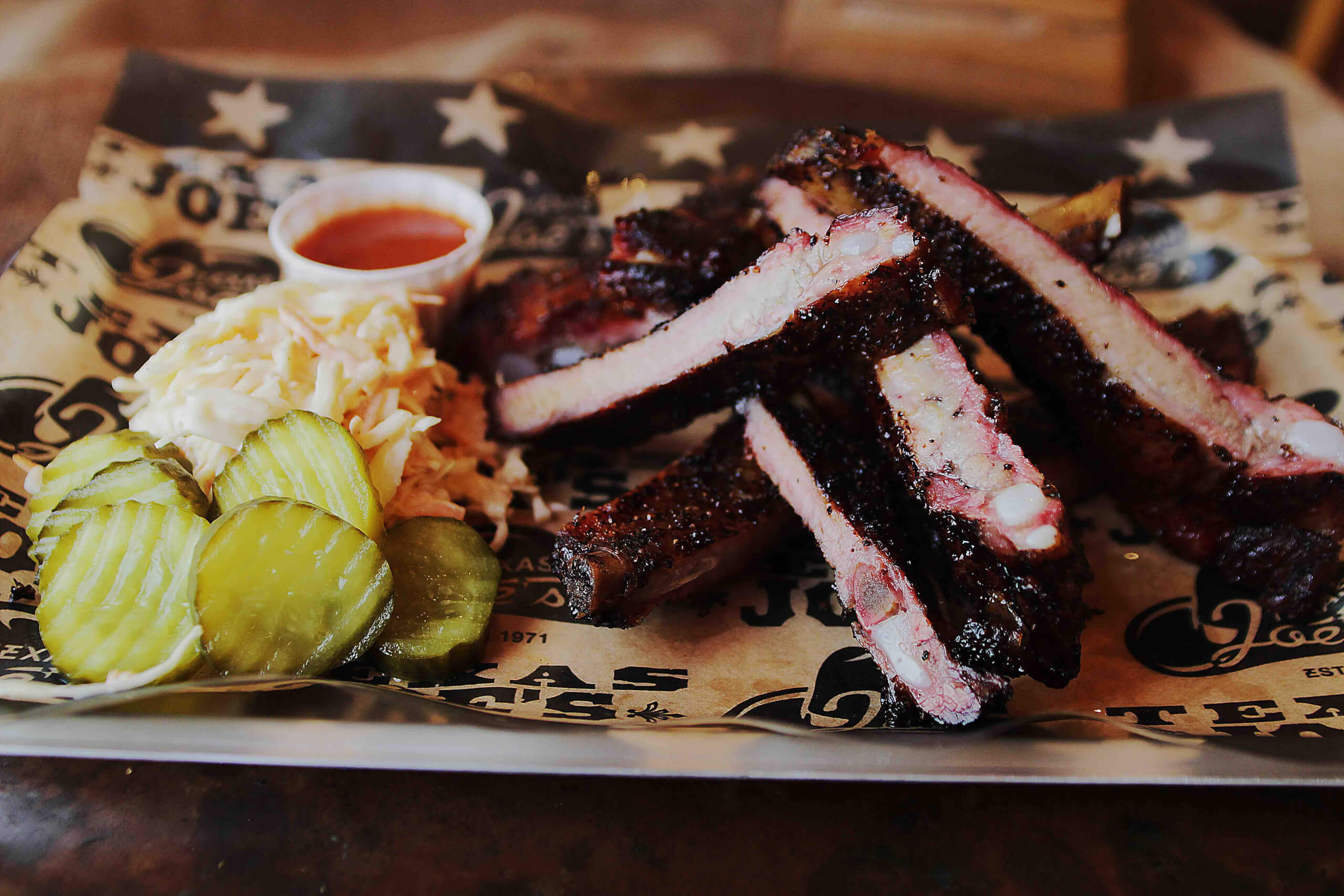 While the meat is Joe’s prized item on the menu, the side dishes are shown the same amount of love. Having had trouble with pinning down decent sized Jalapeños, Joe informed me that he’s finally found a jalapeño dealer that ships in some of the best jalapeños this side of the Atlantic. And boy, he’s not wrong. These jalapeño are beauties, made better by the fact that they’re stuffed with cream cheese and beef brisket, and then wrapped in streaky bacon. Did you just read that description? You can stop licking your computer screen now. These were by far the highlight and took me on some quasi-religious experience that I didn’t want to end. Corn bread was another solid side, hit of chilli and served with a lob of butter. Done. And the mac n’ cheese bubbled gloriously under a layer of grilled cheese – I love a good carb fest. Beef brisket, mac n’ cheese and coleslaw felt like Destiny’s Child had been reunited. That’s a solid team, right there. 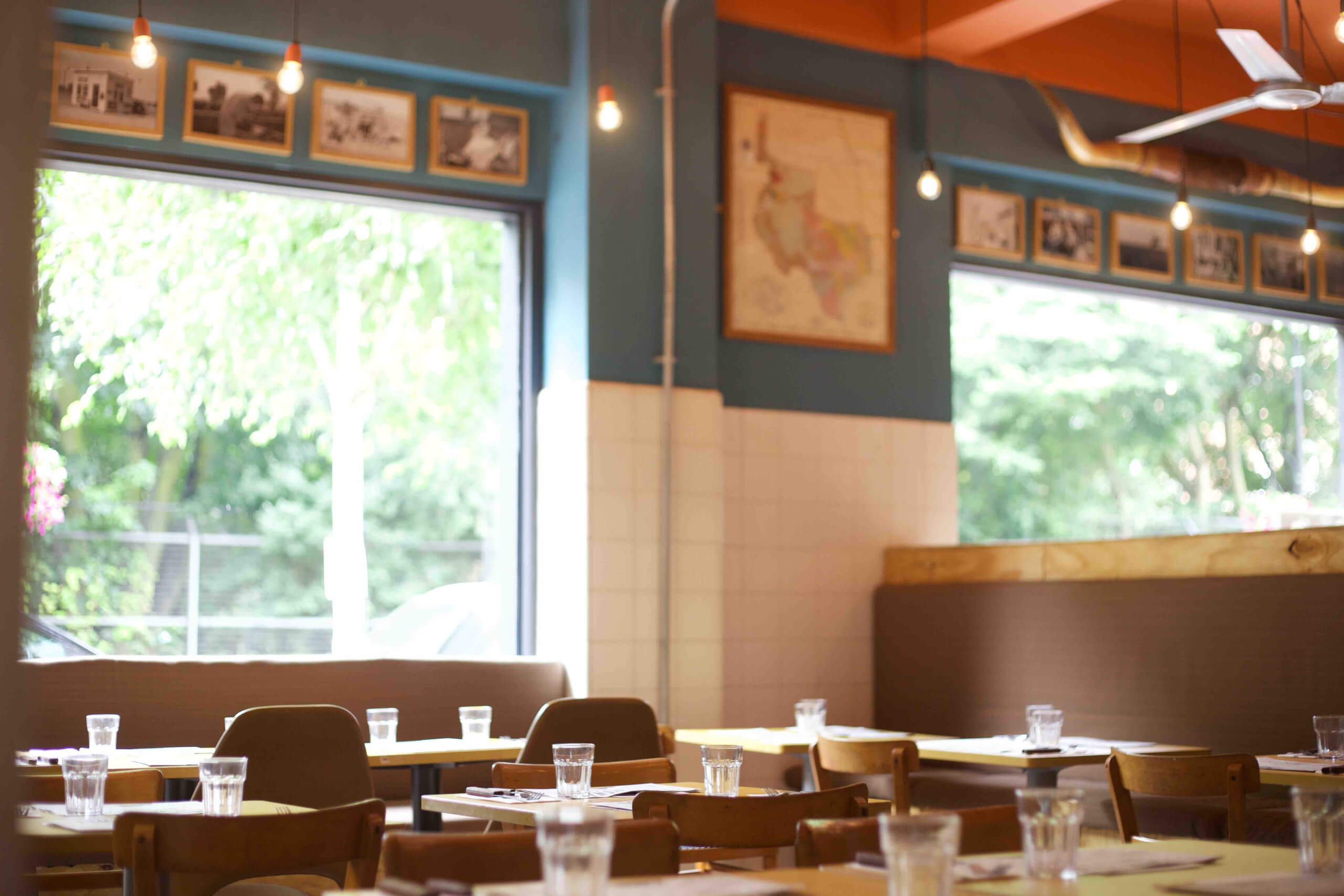 Apart from the usual soft drink offering, Texas Joe’s also stocks a range of local beers including Camden Town and Bermondsey’s Kernel Brewery located just down the road. To finish off you meal in true American style, order the Texan Lone Star lager, or one of the award-winning bourbons from the Balcones and Garrison Brothers. 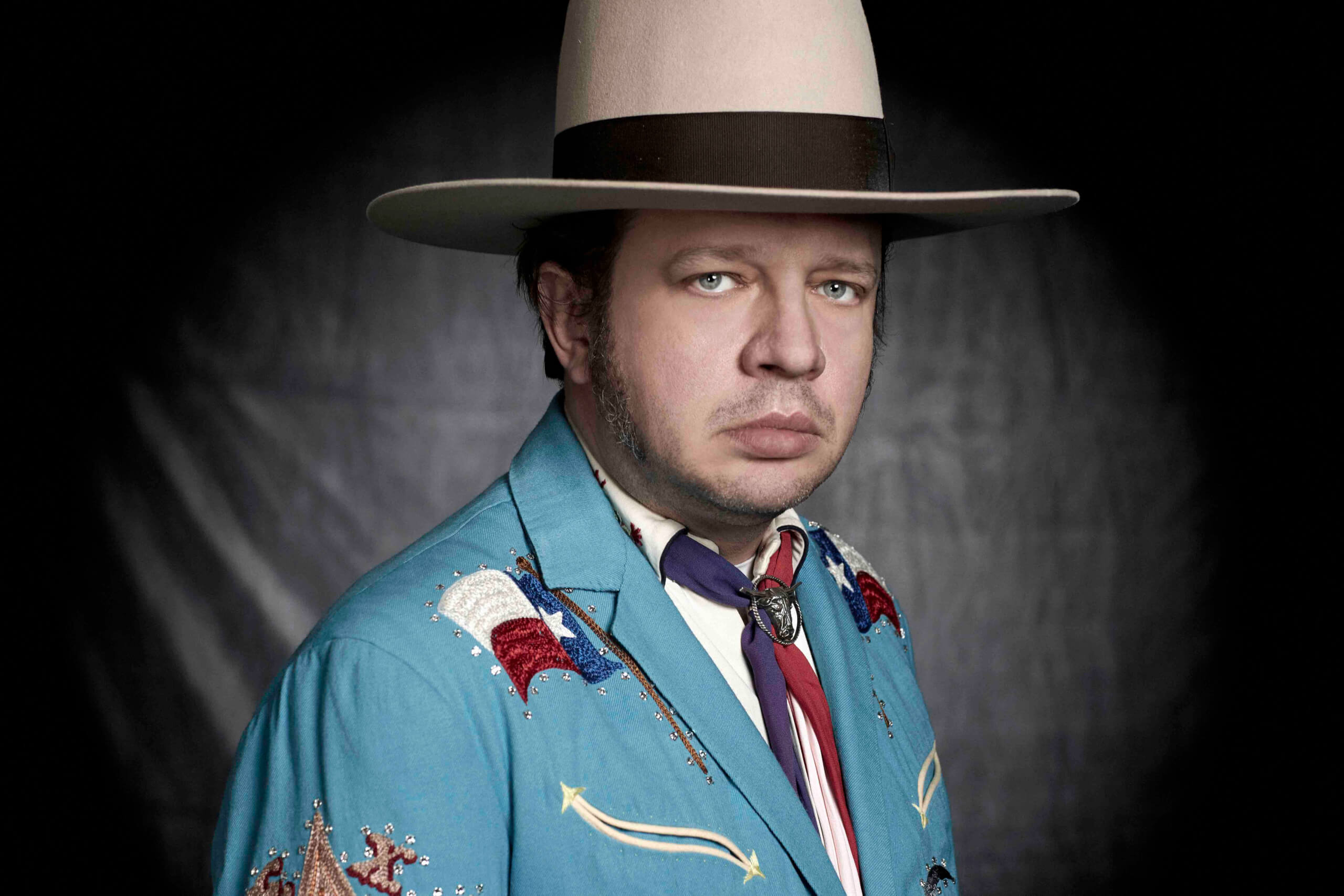 Texas Joe’s has nailed the backroad BBQ joint. Joe himself is a larger than life character who you can’t help but have a conversation with, the guy is an absolute hoot. He’s on hand to help with your menu choices, and will happily share antidotes and stories about jalapeños and jerky. What Texas Joe’s is doing is by no means new in the London food scene – American BBQ has become far more popular in the city, but what it is doing is serving good quality, Texan grub with passion. What I would say is this – if you’re going to go to Texas Joe’s you have to do it properly. Order all the sides. Drink all the beer. Eat all the meat. This place doesn’t do anything by halves, and that’s why I love it.