South Place Hotel is a hit with the breakfast crowd. The staff knock up a killer soya latte, their granola with yogurt is a team favourite, and they’re skilled in the art of omelette making. They’ve got the early morning menu, down. But before you go spying on the brekkie dishes, let me introduce your to their latest dinner offering. South Place Hotel recently rehauled its evening menu to make way for the South Place Chop House, loosely based on its sister restaurant, Butlers Wharf Chop House. The new menu focuses on British classics with a London twist, using fresh local produce. Everytime I visit Liverpool Street on an evening, it smells like the stock exchange and sadness, thankfully, however – the South Place Hotel doesn’t speak in stock lingo and it certainly doesn’t smell like a overpowering mid life crisis. Enough with the chit chat, here’s the lowdown on South Place Chop House: 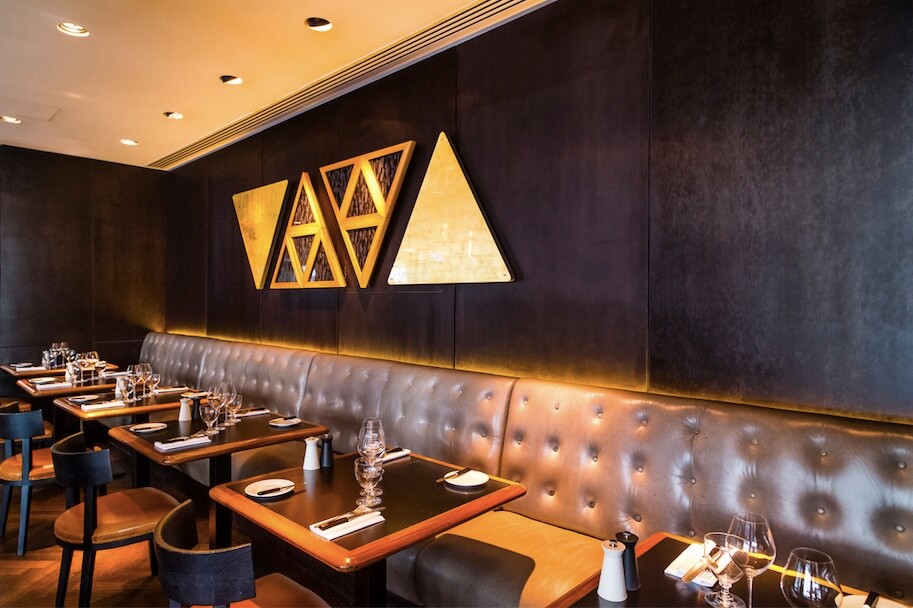 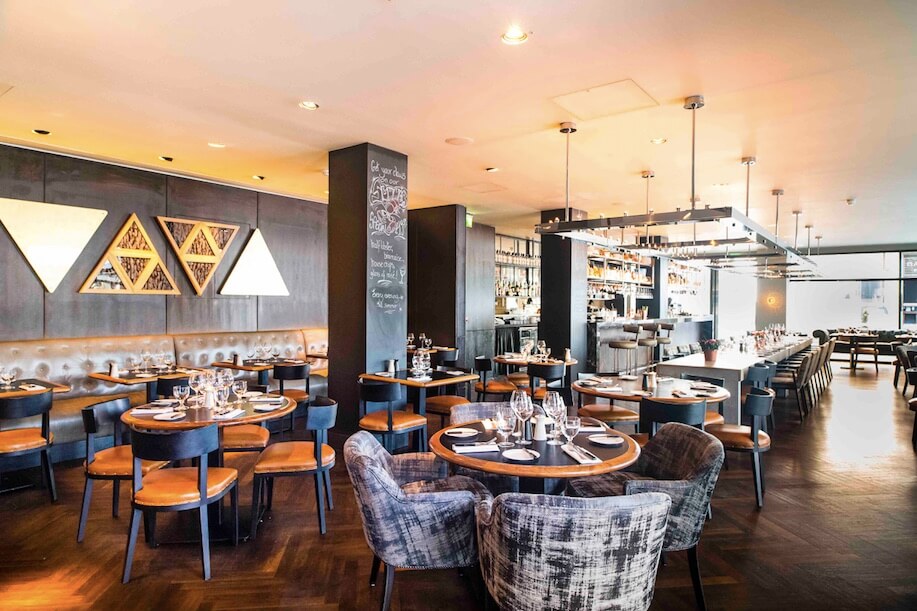 South Place Chop House is primarily kitted out in the colour black. It’s got the whole moody cool vibe going on interspersed with modern features and sleak fittings. You wouldn’t think you’re in a hotel restaurant. It’s beautiful – light, airy, super stylish – the kind of place perfect for everything from dates, to group dinners, and taking your mum. There’s an open kitchen, central diner bar, floor-to-ceiling windows and outdoor seating for the summer months. London is now brimming with fantastic restaurants within hotels, which are fab in a right all of their own. Hotel restaurants were the place to go when there was no choice, but now that’s all changed. 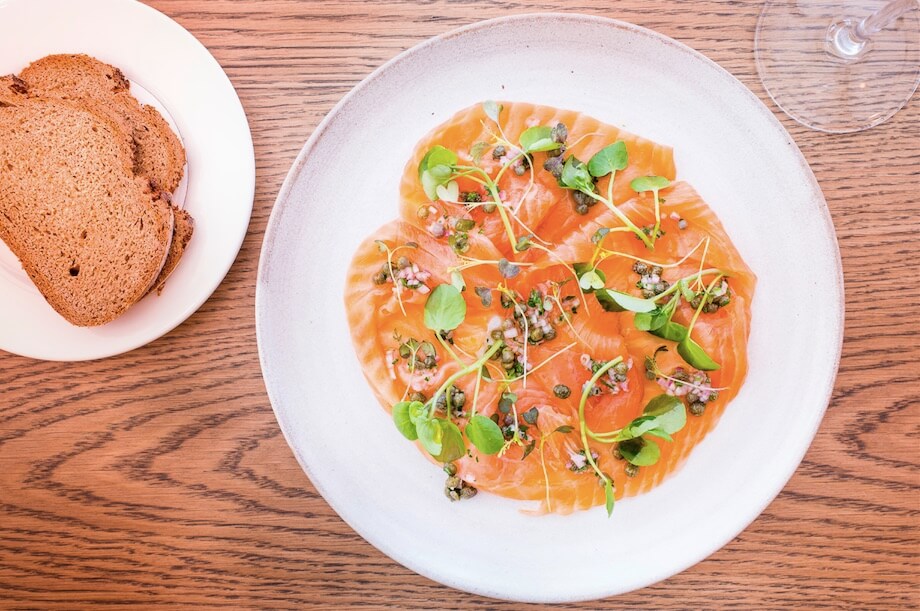 The menu changes monthly, with a strong focus on seasonality. The bread basket is one of the best bread baskets I have ever encountered. Not just butter my friends, there’s garlic ailoi, hummus, and olive oil and balsamic vinegar. There’s no finer sight than a thick slice of sourdough dipped in a tangy aioli. And yes, I ordered another pot. 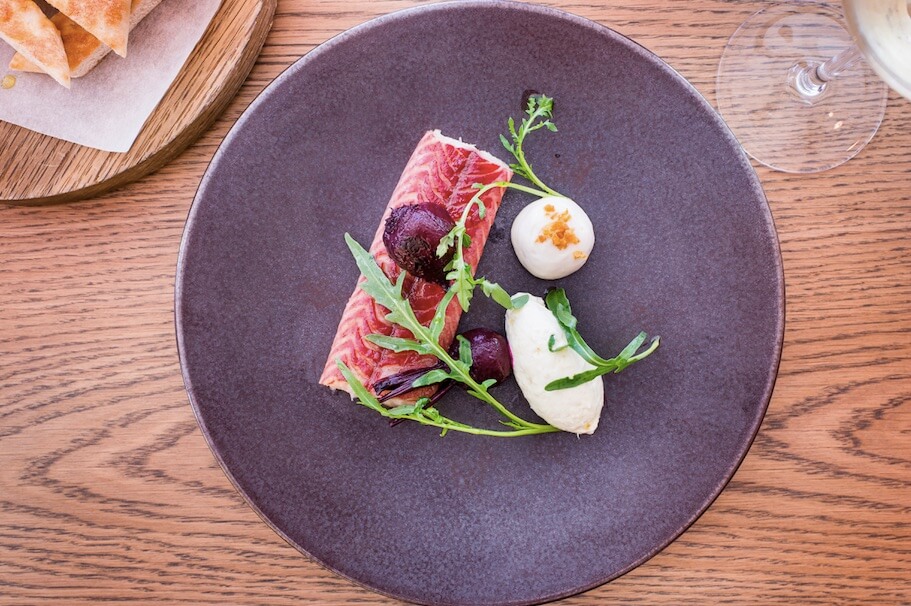 Before you inhale all of the bread, the warm Burtford Brown Scotch egg is a strong starting point. It’s yolky. It’s large. It’s ruddy sensational. The addition of the pickled walnut ketchup really works with the pork and breadcrumb casing. The Waldorf salad with soft poached egg is full of flavour, bursting with fresh ingredients and a great crunch with the nuts. The salad could do with less house made salad cream, as the dish became incredibly rich towards to end. 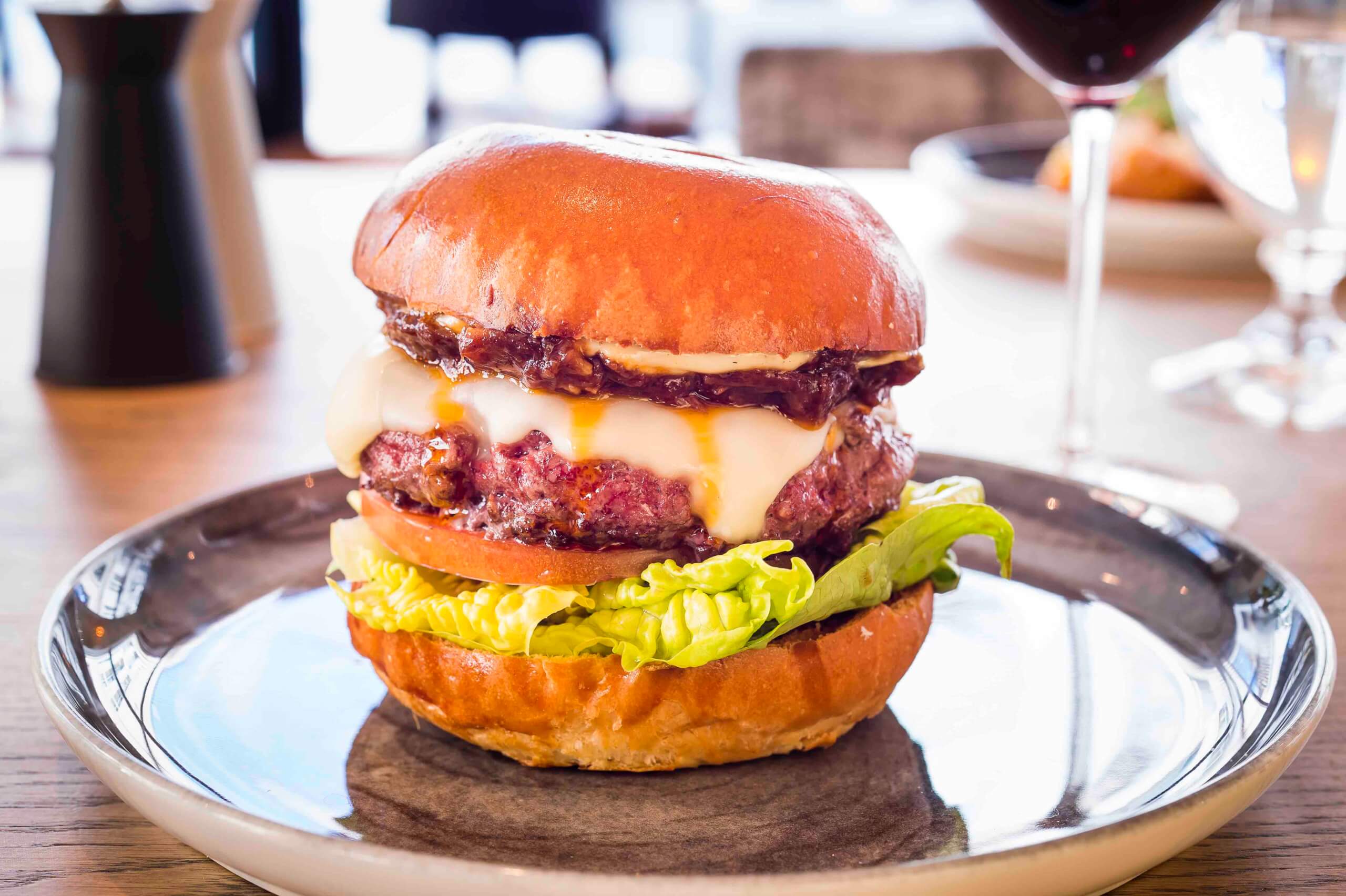 You can’t come to South Place Chop House and not order steak. The team are super passionate about their red meat, with sharing steaks, rib eye and fillet all up for grabs. If you’re in the mood to whisper sweet nothings over a large cut of beef, the chateaubriand for two will solve all of your meaty dilemmas. And if you’re not one to share (a challenging topic, sure) the fillet is a fine cut of meat. Although this cut doesn’t benefit from fat found on the rib eye, the fillet is still flavoursome. The rib eye though is the pick of the menu. This cut needs no introduction, it’s not been messed around with and hasn’t become victim to over seasoning. The team have allowed the meat to do all the talking.

Let’s be honest, a good steak needs a proper portion of chips as a side. The hand cut chips at South Place are incredibly addictive. And super fluffy too. Get one of your five a day with the sprouting broccoli – crunchy greens topped with toasted grains, yogurt and chilli for added bite. 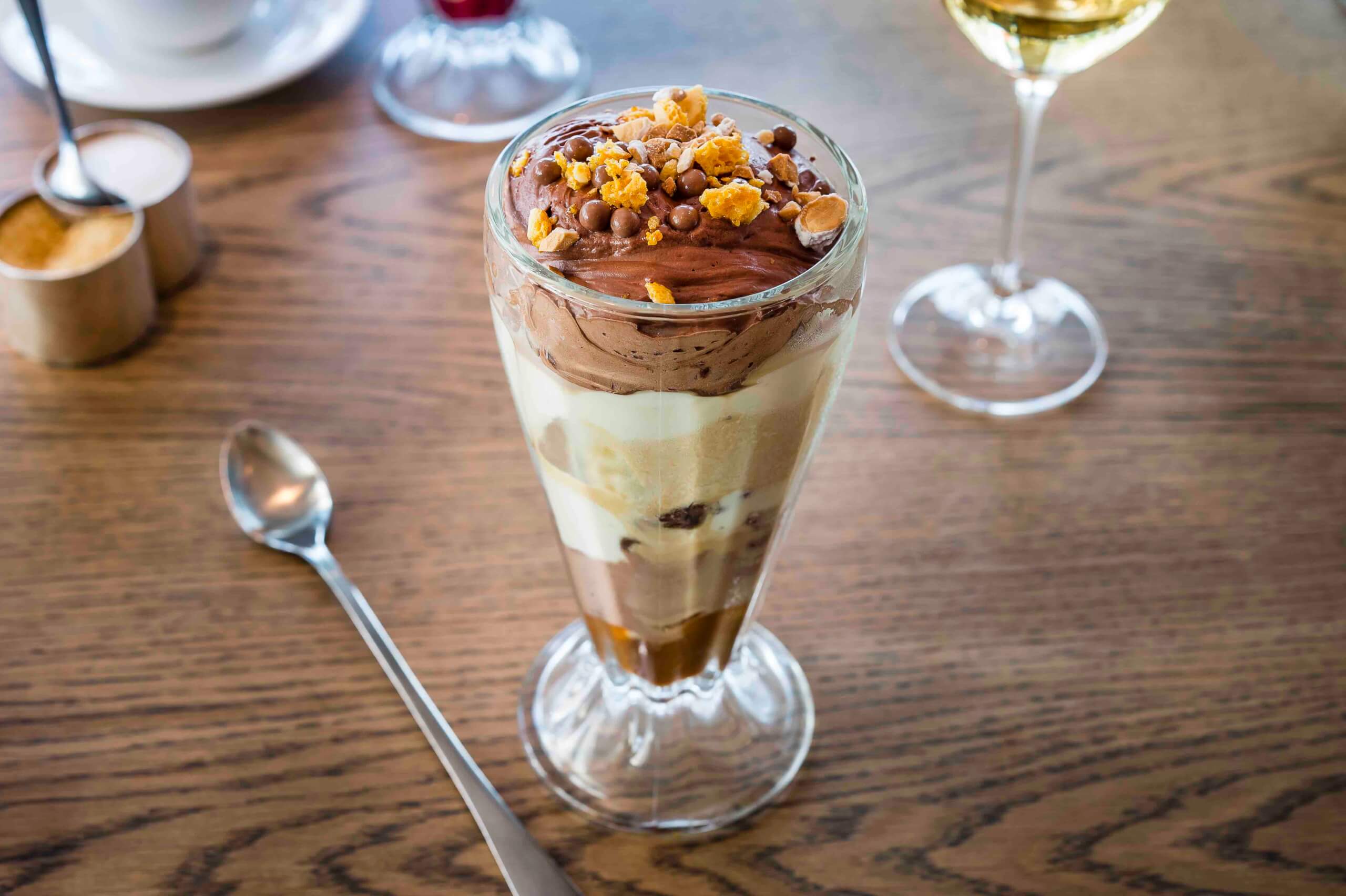 Don’t leave without trying the sticky toffee pudding. Seriously. Probably the best I’ve tried in London. It’s so simple – served with raw pouring cream – and proof that sometimes you don’t have to mess around with flavours too much. Toffee. Sponge. Cream. Everything you could want and need in a dessert. And for a proper nostalgic kick, order their chocolate sundae. 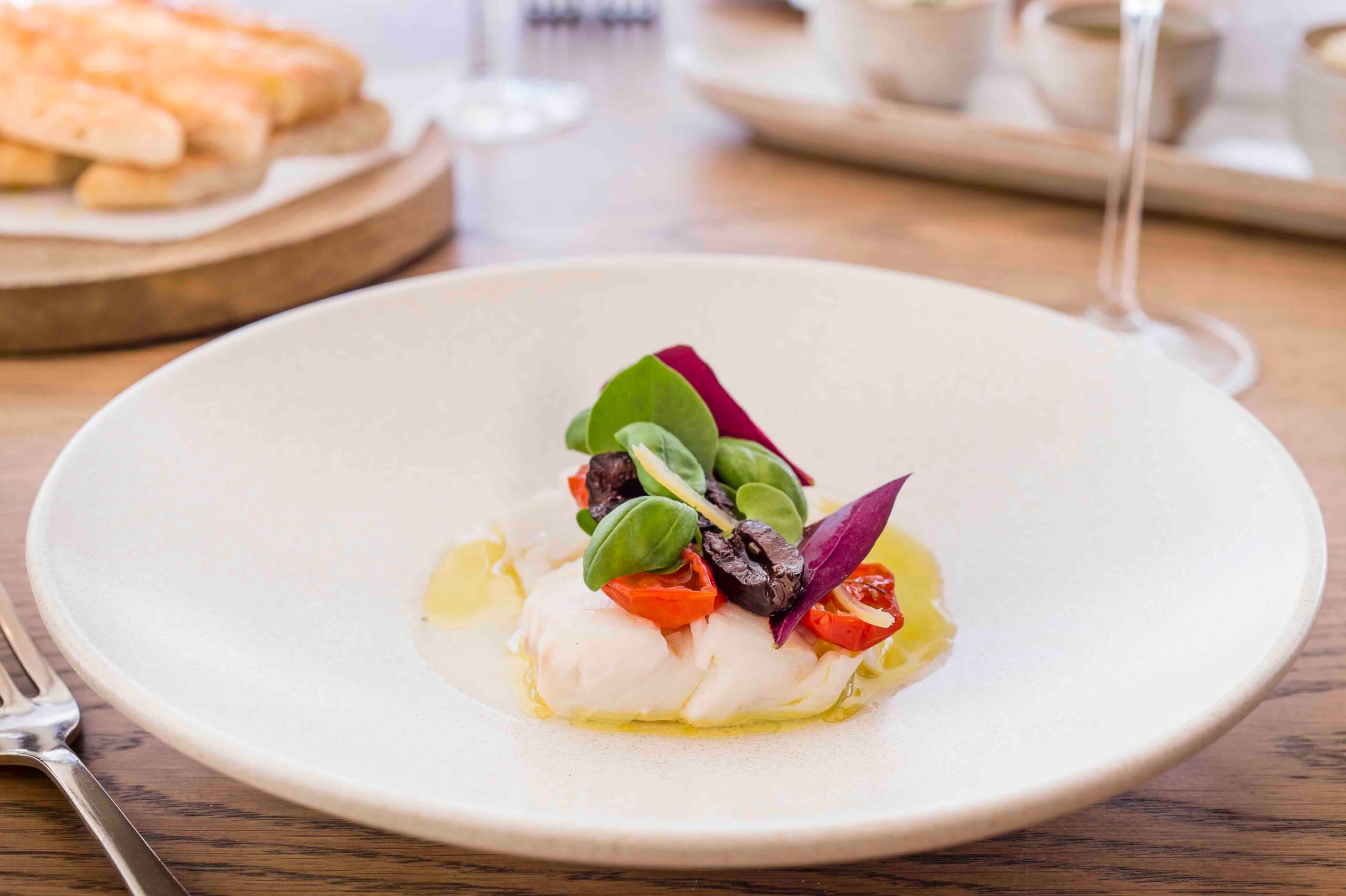