Pizza really is the great food unifier, isn’t it? It’s that relaxed and versatile crowd-pleaser that’s suitable for almost all settings. A long overdue catch-up with an old pal? Share a pizza. First date that you’ve been looking forward to all week? Get to know each other over a few slices. Office party? Sure they can be a drag, but a company-imbursed pizza delivery can do much to ease those awkward silences. In fact, meet another person for the first time and chances are that you’ll have a love of pizza to bond over.

London’s already a great city for pizza-lovers, but a new project from the much-beloved Pizza Pilgrims provides a perfect setting for the more laidback occasions where only some pizza will do. Bringing inspiration from the “two greatest pizza cities in the world”, Slice by Pizza Pilgrims combines the great flavours of Naples pizza with the fun, lighthearted and carefree nature found across the pond in New York.

Slice by Pizza Pilgrims: The Lowdown 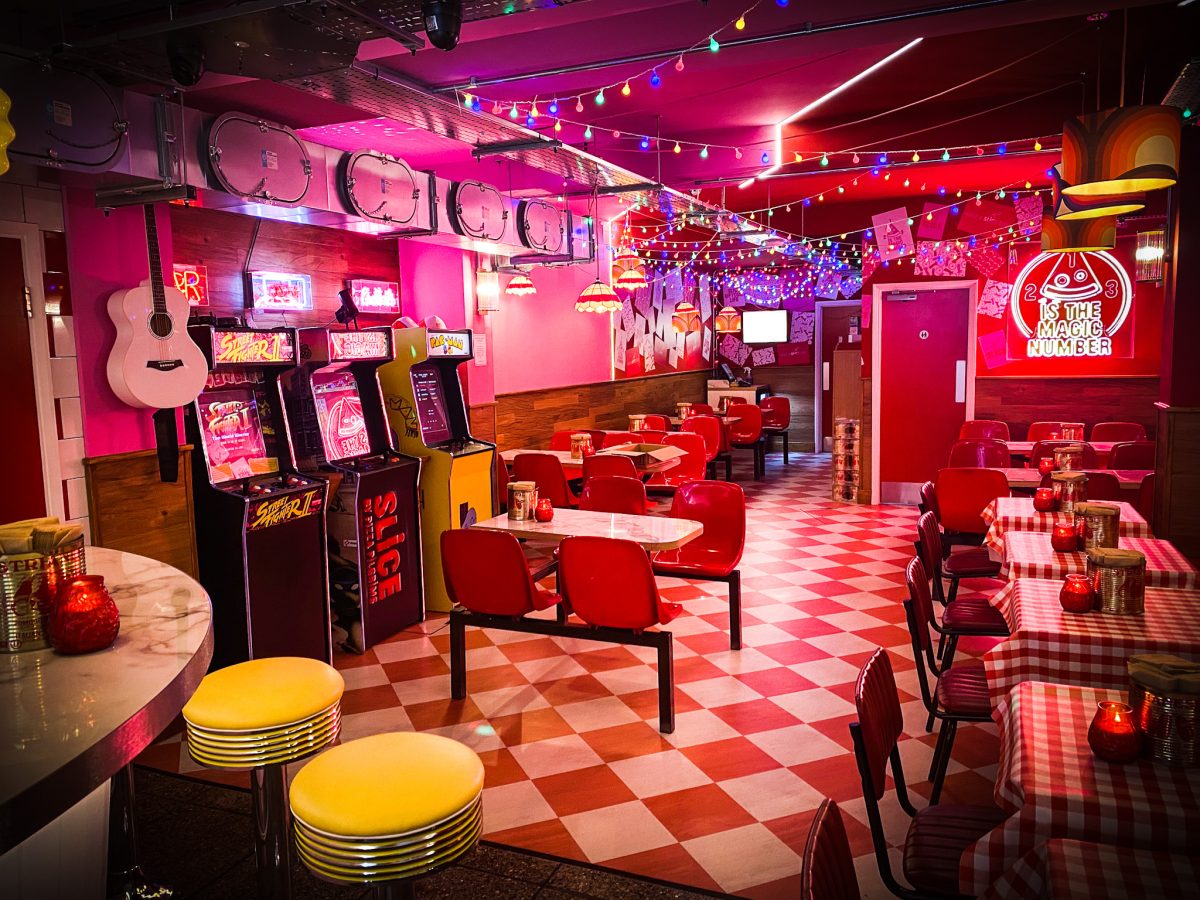 London’s ever-present Pizza Pilgrims have long taken inspiration from the principles of Neapolitan pizza, whether that’s through their traditional Italian ingredients and flavours or their stanch championing of the humble pizza crust (“In Crust We Trust”, as their company motto aptly puts it). But now they aim to pay homage to another one of pizza’s spiritual homes by bringing a bit of that relaxed New York spirit.

Slice by Pizza Pilgrims have several locations across London, including Oxford Circus and Southbank, and have just opened up a brand-new location a bit further north in the capital. Situated right next to Finsbury Park station, the Seven Sister Road outpost is perfectly located for a quick grab-and-dash before getting the tube or a relaxed weekend bite before a night out. It helps, of course, that London’s favourite bowling alley-turned-legendary-nightspot Rowan’s is just around the corner.

While Pizza Pilgrims’ usual restaurants aim to conjure up the vibe of an Italian family pizzeria, here all things Americana are embraced as we’re transported to the Big Apple by the red and white chequered table tops reminiscent of a late-night diner and the retro rock memorabilia that you might find in a Brooklyn dive bar. Meanwhile, the very-80s string lights and vintage arcade games might make you feel like you’re in an episode of Stranger Things. It could very easily all come off as a bit too kitsch, but by leaning into the fun, it simply works. 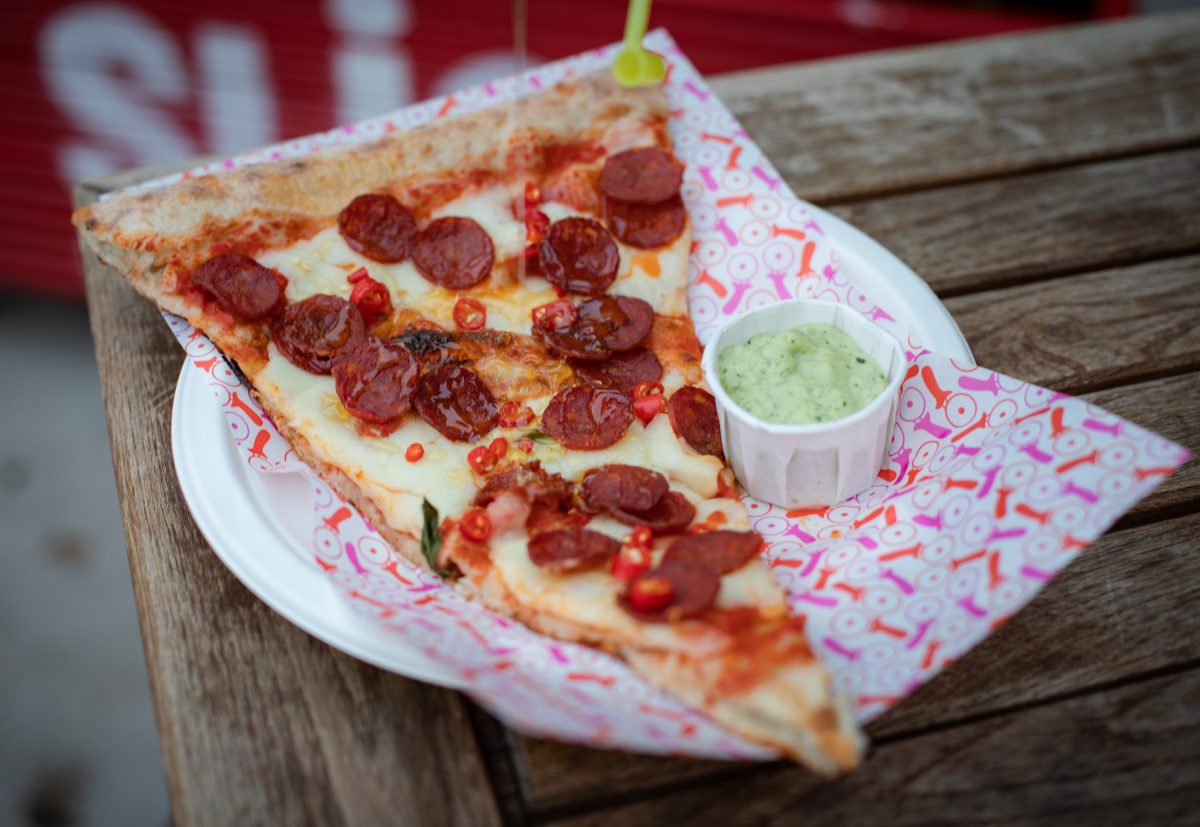 The big selling point of Pizza Pilgrim’s Slice offshoot – by its very name alone – is its serving of pizza by the slice, which allows you to taste a bit more variety. So what flavours are on offer? Still serving up the fine quality pizza that we’ve come to expect from Pizza Pilgrims, on the menu you’ll find a breadth of choice ranging from Margherita and white pie to a burrata-topped pizza and a vegan option (dubbed the Sgt Peperonata) that comes with chargrilled peppers, red onions, tomato and garlic.

But they also shake up their formula a little by leaning into that New York sense of experimentation and fun. For lovers of spice, the Jalapeno Popper slice serves up a classic Margherita while a pepper-heavy twist, adding pickled jalapenos, a house “Jalapesto” sauce and some Philly cream cheese to top it off. Meanwhile, the more adventurous will want to try the honey pizza or the Penne Alla Vodka. That’s right: pasta on a pizza with vodka-infused tomato sauce just to up the ante. 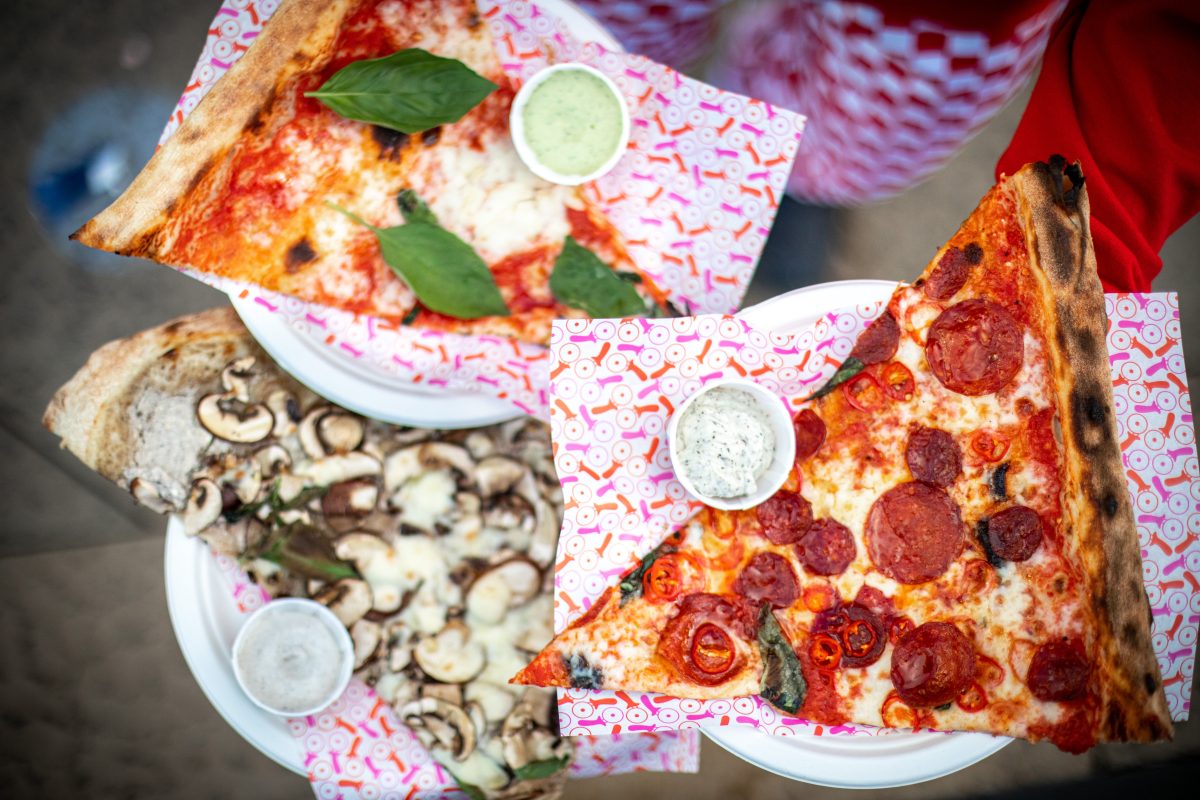 During our visit, we opted to try the slightly sweet ’n’ sour Sgt Peperonata and the mouth-tingling Jalapeno Popper, both of which did not disappoint. The all-out winner, however, would have to be the artichoke, crispy prosciutto and truffle slice, which blends its strong and distinct flavours perfectly without ever threatening to overpower. 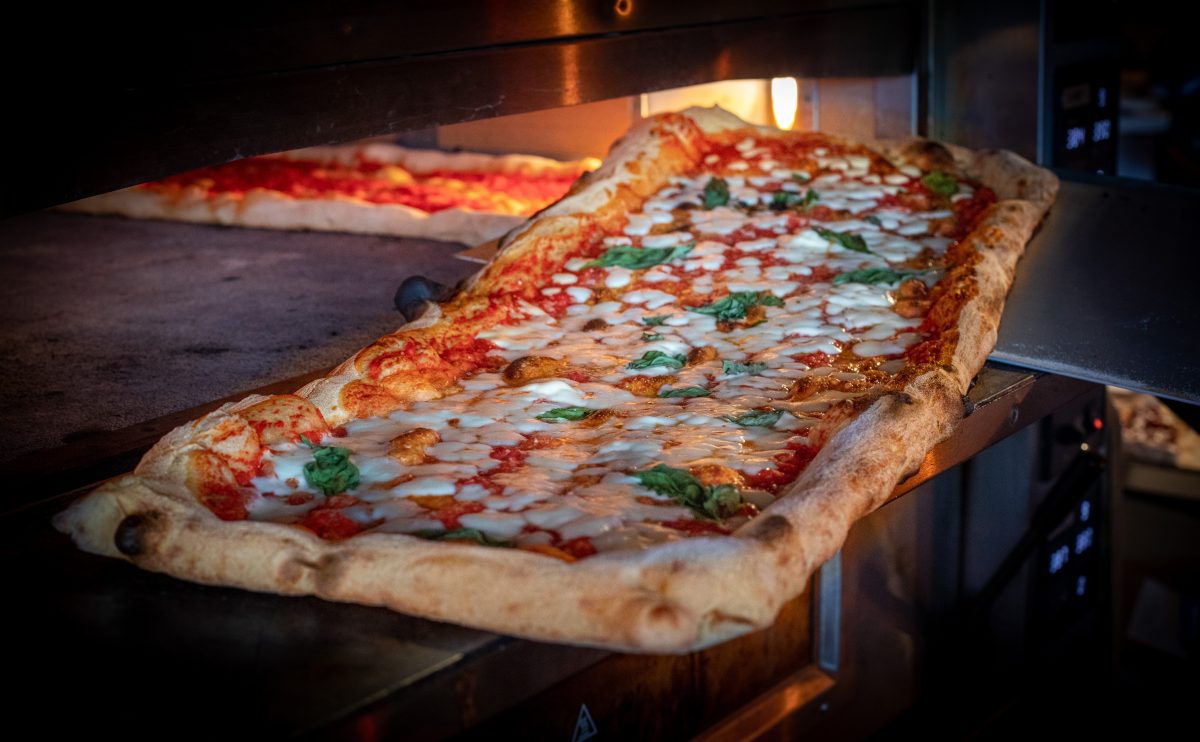 But it’s not just about the slices either, Slice by Pizza Pilgrims also serves those that find themselves with much heartier appetites too. A couple of slices not enough to do the job? Go for the al-metro option, which offers a yard-length pizza (yes, a whole yard of pizza) that comes in two different flavours split down the middle and is ready to be shared or devoured whole.

New York’s pizza tradition obviously shares a lot in common with its Italian roots, and Slice by Pizza Pilgrims incorporates those elements of Neapolitan inspiration fluidly throughout the menu. Accompany your pizza with side orders of burrata, parma ham or a can of traditional Italian Gordal olives, Sicilian cannoli for dessert, or wash everything down with an Italian cocktail-inspired slushy (could an Italian-American booze crossover get more perfect?). We went for the Aperol Spritz Slushy and the Bellinitini (a Porn Star Martini meets Bellini hybrid), and next time we might add the very intriguing Jalapeno Picklepack to our order too.

All in all, Slice by Pizza Pilgrims will win over your hearts and stomachs by combining good food with great fun.

For further information on Slice by Pizza Pilgrims, see here. 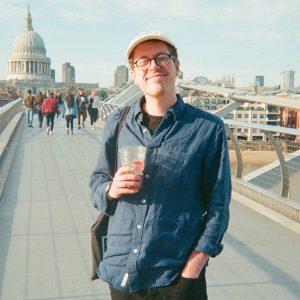 Luke is a freelance writer. Welsh-born living in London, he enjoys Reuben sandwiches, conveyor belt sushi and whiskey ginger ales. Obviously not all together though.