I’m going to hold my hand up here, and say it: I love meat. I’m the type of person that doesn’t believe a meal is complete without the addition of meat. What can I say, I’m a three meats a day gal. Before you slam me about cows and carbon emissions, I’ve cut back my meat obsession in recent times. But damn me, does a steak taste good. When you can find me a suitable steak replacement, then we can talk.

So when I heard about new vegan/veggie joint Farmacy had opened not too far from Casa Del Grimshaw, I was intrigued. Deciding to spread my wings from London’s meatiest offerings – it was time to fill my body with plant based grub. The last time I rocked up to a vegan establishment was my first week in London, it was a raw vegan haunt in Notting Hill and I was surprised when they served my hemp milk coffee hot. We live and we learn, people. You’ve probably read about Farmacy, seen pictures on Instagram or heard it through word of mouth – and yes the rumours are true; it’s very good. I’ll stop with the small talk now, here’s what you need to know about London’s hottest opening: 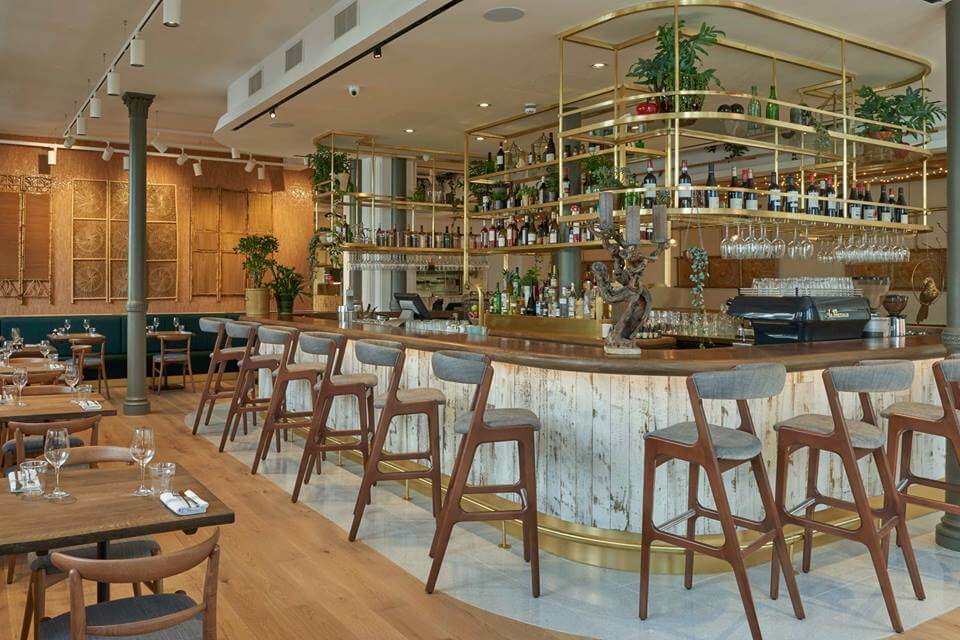 What tends to happen with these special diet restaurants is they decide to keep the decor simple, or throw as much gardening materials on the walls as physically possible. You don’t have to sit on a stool made out of hemp to enjoy some veggie fare. Farmacy, led by entrepreneur Camilla Al Fayed, is a passionate and experienced group that has a vested interest in every aspect of the philosophy from the kitchen to the dining and bar experience – with this team at the helm, the restaurant was always going to be a stylish affair. They’ve ran with the whole sugar-free, additive-free menu but made it accessible and approachable. The restaurant’s decor is modern; there’s wooden cladding, leather chairs and thankfully, no unnecessary fuss. It’s clean, spacious and on this Thursday evening, there’s a real buzz. Word has spread fast about Farmacy, with the place already attracting a mixed crowd. There’s tables of ladies, hungry families, there’s a couple of girls who have recluentatnyl dragged their other halves along, as well as the suited corporated crowd who are sinking a bottle of wine in the corner. You don’t have to be vegan or vegetarian to enjoy the food here. And that’s what so great about this place. 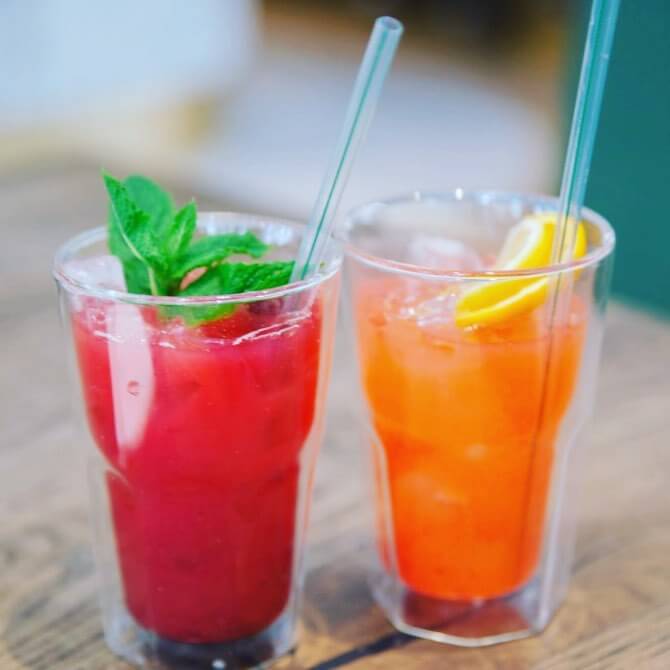 Farmacy may be free from chemicals, but it’s certainly not free from alcohol. They’ve sourced local artisan wine to make up their tailored wine list, with vinos featured either sulphur-free, certified organic or wines which have received minimum interference. It’s certainly no cheap plonk from your local Londis.

The smoothies here are really great – I’d recommend the Cool Beans (£6) option, a sweet medley of freshly brewed coffee, maca, dates and cold pressed coconut oil with almond milk. There’s also the option of decaf coffee which I gladly accepted. A 7pm coffee induced smoothie never did anyone any favours. The smoothie was creamy and rich – not overpowered by the coffee – the ratio was just right, but the smoothie could’ve been slightly colder as it was verging on the tepid side. The Chocolate Supreme (£6) featured cacao, maca, dates and cold pressed coconut oil with almond milk, and tasted like a posh Nequik. If you don’t fancy a dessert, order one of these beauties – it’s like a pud come drink. My tip is to make sure it’s either cold, or you sling a few ice cubes in.

There’s plenty of other drinks to try including their range of cocktails. The Cool As A Cucumber (£8) is about as refreshing as it gets – gin, cucumber, basil leaves, fresh apple and lime juice, while the Tequila Mockingbird (£12) combines tequila, mango chilli shrub and lime juice, which is far more potent. To cool you down on a muggy day, the iced tea combines caffeine-free green tea with lemon juice, orange juice and raspberries, and will do just that. Still fruity, without the unnesaary sugar and E numbers. If, like me, you bounce off the walls from one coffee, try the Golden Milk, it’s basically almond milk, some turmeric and cardamon – but it provides big Indian flavours and it’s proper comforting. 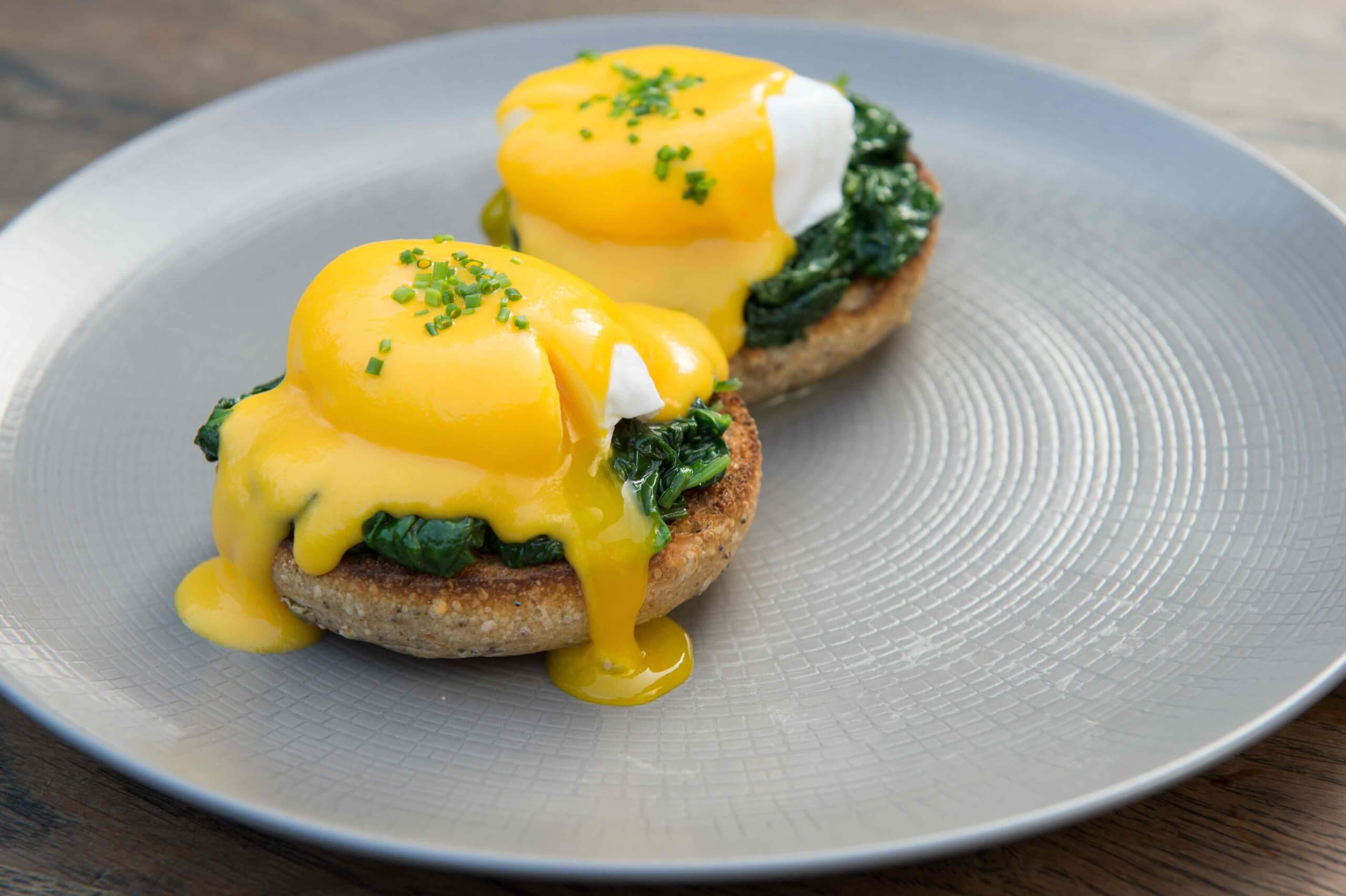 Let’s get down to it: the food here is free from additives, chemicals, dairy and all the nasties, but I’ll tell you this now – it’s not free from taste. The team’s mission is to provide a nourishing and delicious menu that supports well-being and healthy eating, and they’ve done just that. Place like these could go one of two ways, it could be healthy, but actually really dull tasting, or creative with big flavours to boot. You’ll be pleased to hear Farmacy is the latter.

I’m a big fan of sharing starters, so it only felt right to opt for the Mezze Feast (£13). It’s a generous portion of baba ganoush, sprouted hummus, sprouted quinoa tabbouleh, olives, pickles, zatar crackers and sourdough spelt bread. I would say, you’d probably need to order more bread, as nice as the spelt bread was – it wasn’t enough. The dips were a success, with the baba ghanoush a definite highlight. The bread was warmed and freshly made to order, perfect for lathering on the thick hummus.

The other popular starter choice is the nachos (£12) and at over a tenner, they’re not the cheapest nachos you’ll ever consume. The nachos are served alongside guacamole, refried beans with salsa and the restaurant’s take on sour cream – slightly sweeter than regular sour cream, but an all round solid dairy-free attempt. The guacamole is pile high and hasn’t been smashed within an inch of its life. There’s still hearty chunks and the avocado has been weaved with coriander, onion and a slight hint of garlic. 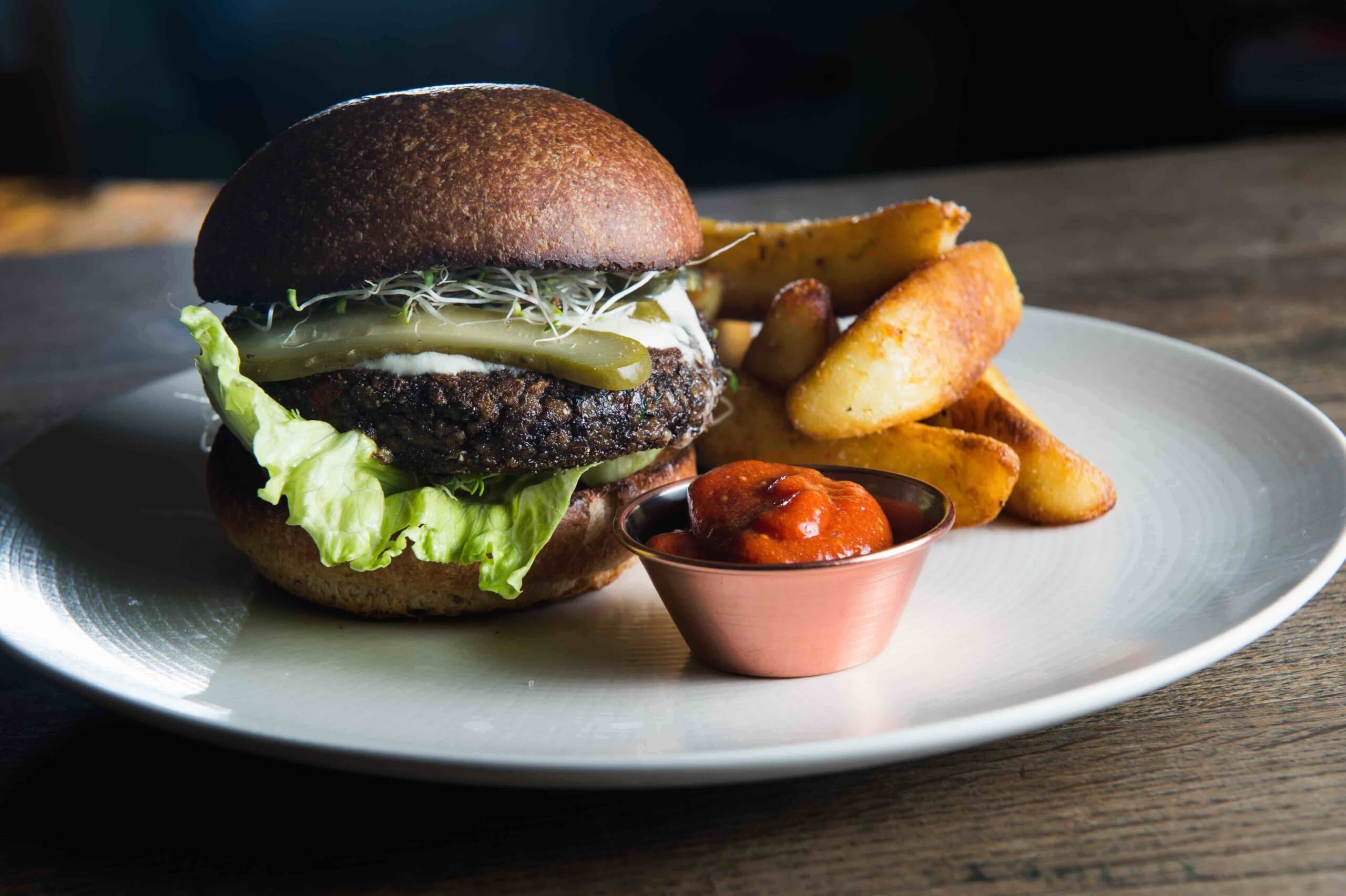 The main course is where Farmacy rises like a baptism of fire. The Farmacy Burger (£14) is an exceptional take on the humble hamburger. The patty is a combination of millet, black bean and mushroom, and before you complain that veggie burgers are either on the bland or dry side (which they usually are), the farmacy burger is topped with garlic aioli, it’s more of a paste than a sauce. This is not a complaint by the way, it was a condiment revelation.

The grain bowls are a perfect way of getting your five a day. The green eggs bowl (£12), minus the ham had all sorts of tasty things going on. The bowl was packed full of quinoa, which wasn’t overly cooked (praise thee), and was topped with steamed broccoli and kale. I added a poached egg and avocado for an extra protein hit. The bowl was wholesome, hearty, and surprisingly, for some grains and greens there was a whole lotta flavours in that bowl. You could probably replicate this dish at home for a third of the price, would it taste the same? Probably not. 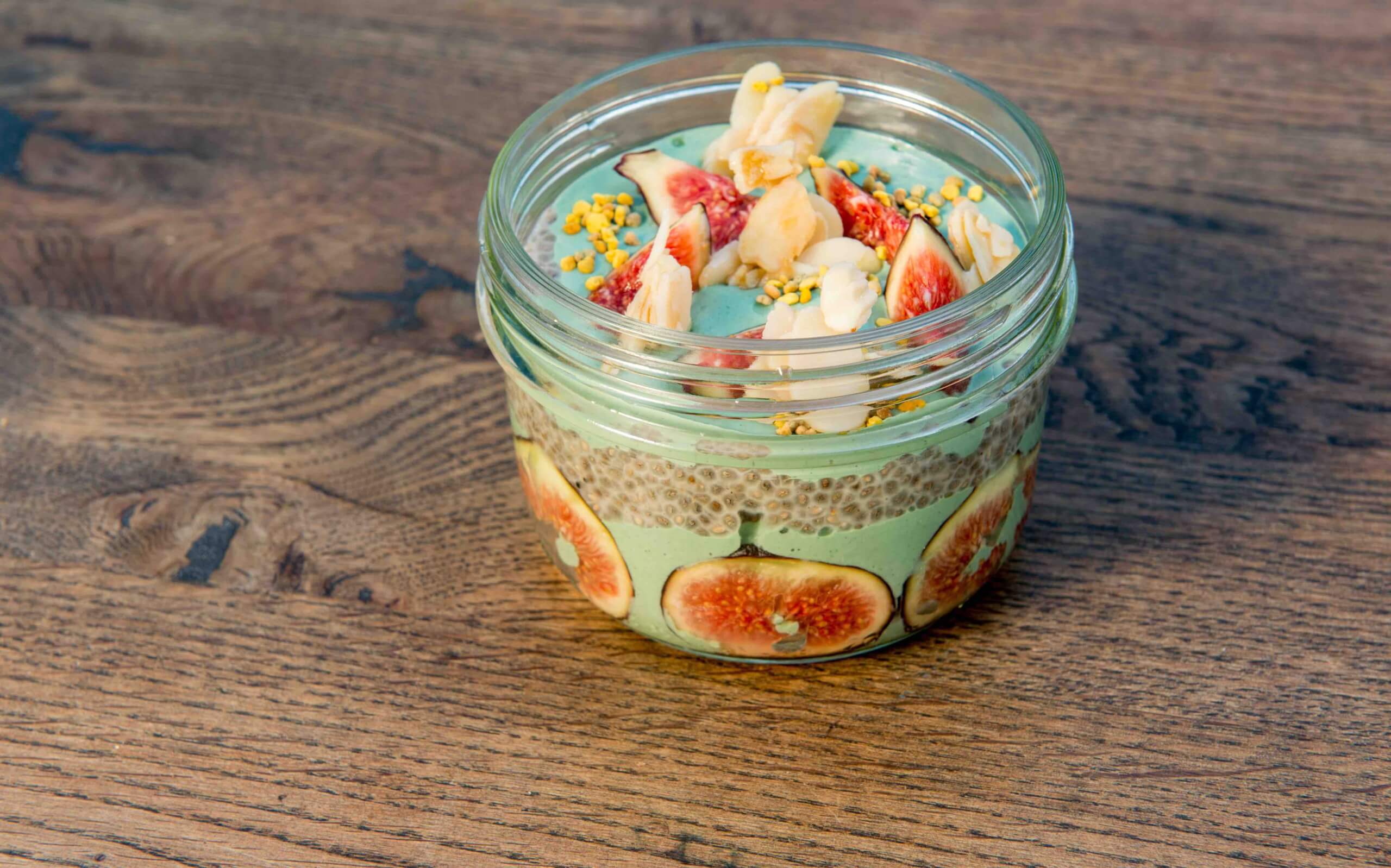 I left Farmacy satisfied. Not only in my food choices, but knowing that the food hadn’t been processed or tampered with. There’s a good energy here, and its ok to leave the restaurant feeling a little smug about yourself. I know I did. The prices aren’t the cheapest, and the bill can soon rack up – but for a one off dinner or a blow out brunch, it’s worth it. The next morning, I had a bacon butty for breakfast with lashings of ketchup, because life’s about balance.