About Time You Tried: The Chinese New Year Menu at HKKBy Angelica Malin

Looking for a special place to celebrate Chinese New Year in London? Look no further – we’ve found it with HKK‘s amazing special menu. It’s totally delicious – here’s why you need to try it: 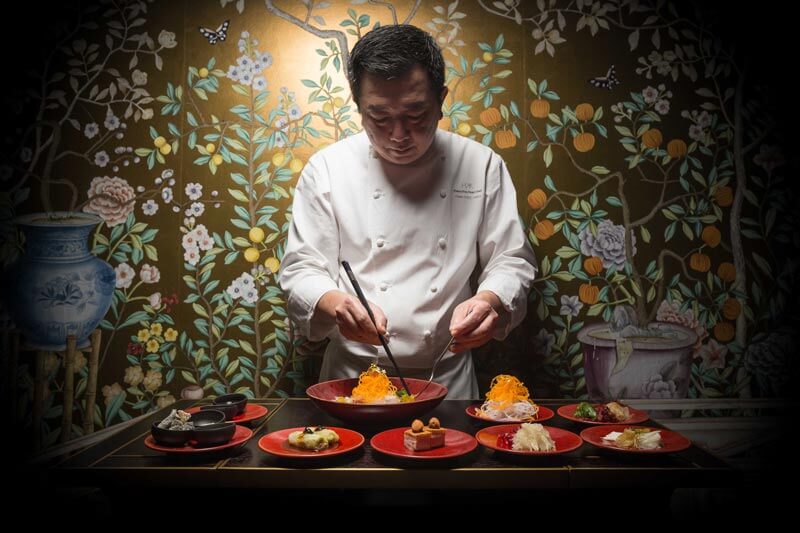 You’ve probably heard the name – and for good reason. HKK was awarded its first Michelin star in 2013, less than a year after its opening. The restaurant by Hakkasan Group and Chef Tong Chee Hwee provides an amazing, bespoke dining experience – it’s small, intimate, and very, very sexy, with dim lights and a cool, laid-back atmosphere. 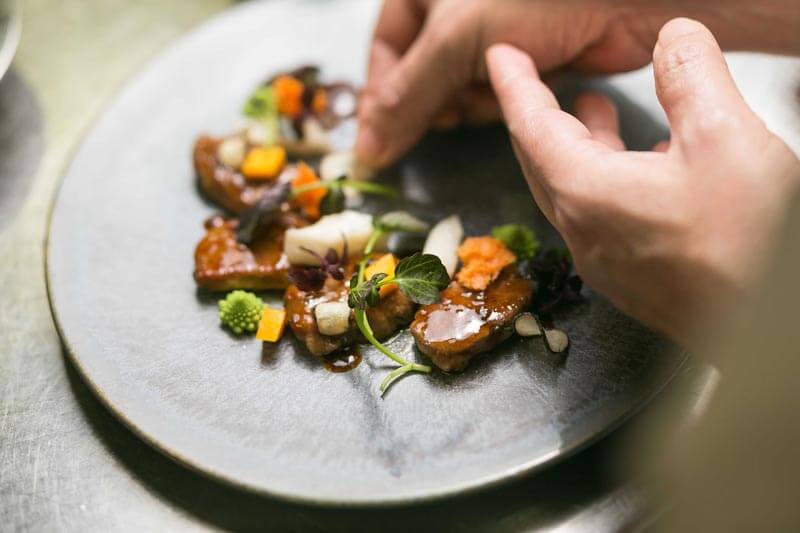 The food? Well, it’s all about modern Chinese. The menu at HKK embodies chef Tong’s talent for presenting complex flavoured regional Chinese dishes with a modern flair, bringing freshness and vitality. They’ve very big into the story at HKK – Chef Tong and his team use the state-of-the-art kitchen as a facility to develop unique dishes, based on ancient recipes and traditions. 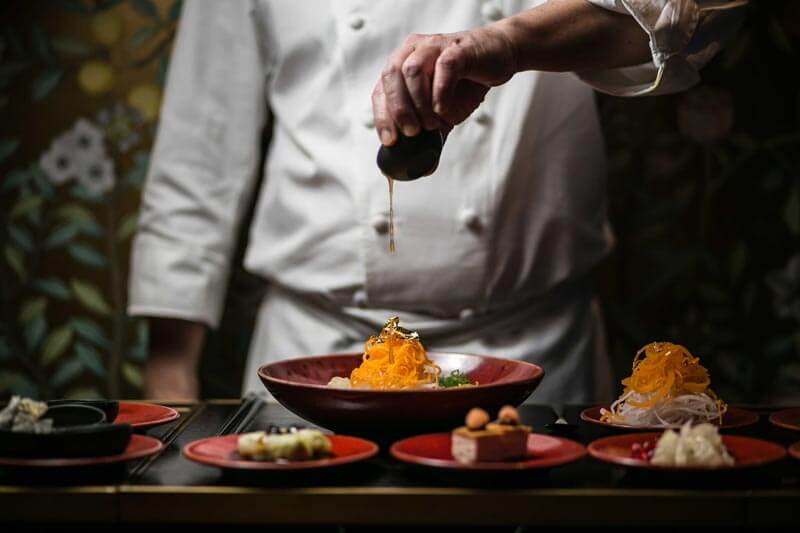 This year, Michelin-starred Chinese restaurant HKK will be bringing Chinese New Year celebrations to the City with a specially crafted menu showcasing the family traditions and Chinese rituals behind the special occasion. Why? Well, Chinese New Year is the biggest celebration in the Chinese calendar and the family dinner plays a pivotal role in the festivities with numerous traditions taking place at the dinner table. Guests will be encouraged to participate in these rituals whilst dining at HKK to celebrate the upcoming year. 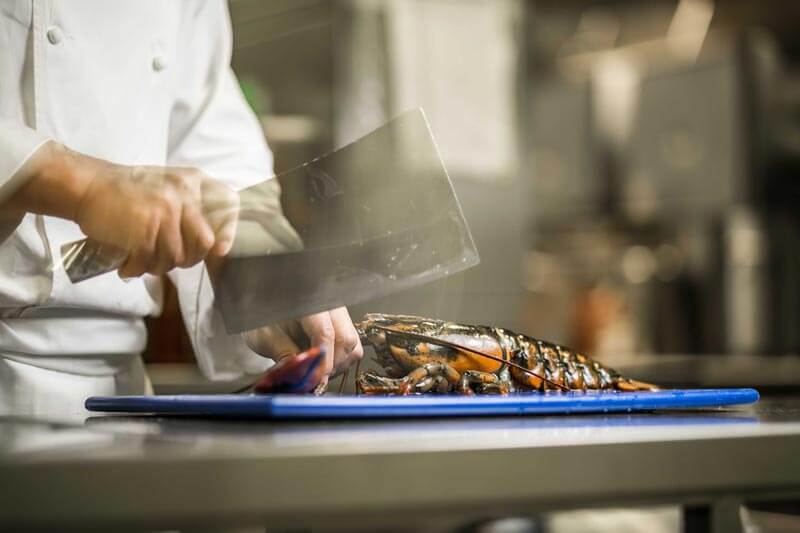 This is a real treat. A limited edition printed menu will be gifted to each guest dining from the exclusive menu, highlighting the history behind each dish alongside intricate illustrations that explore the symbolism of the dishes. The tasting menu created by Hakkasan and HKK’s Executive Head Chef Tong Chee Hwee includes eight exquisite courses followed by a petits fours Tray of Togetherness, accompanied by a matching beverage flight.

The menu at HKK begins with a Prosperity salad – a delicious dish featuring crispy salmon skin and plum sauce, alongside dry oyster rolls with black moss, and barbeque pork belly. 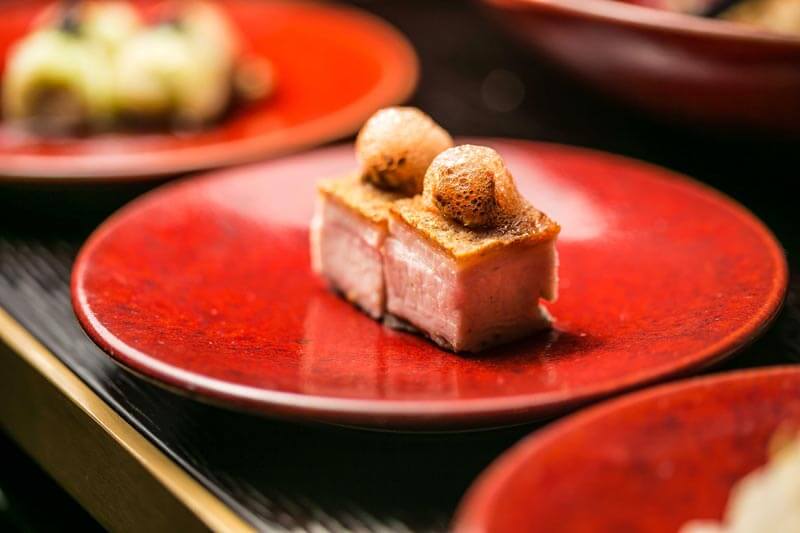 The salad is light and full of flavour, and the interactivity of tossing the salad yourself adds a bit of fun. Apparently, the Chinese ritual involves the entire family using chopsticks to toss the salad together as high as possible – an association with wellbeing and success for the year ahead. 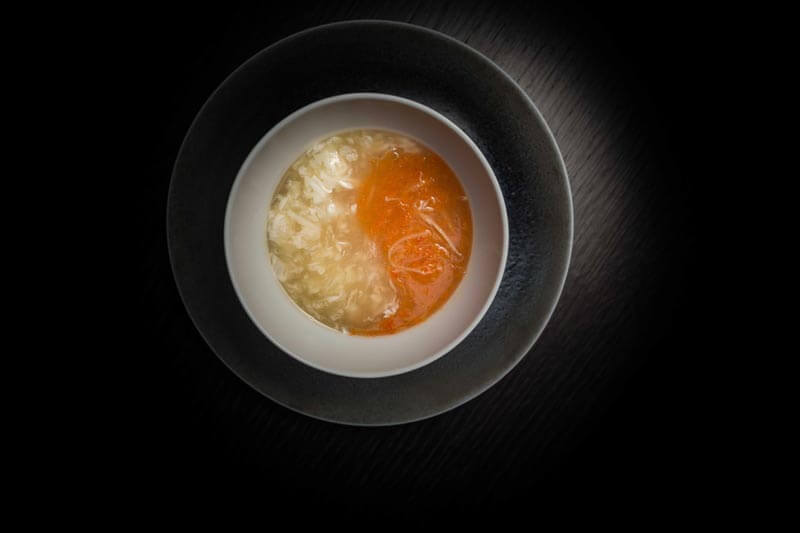 Next, two soups feature on the signature menu, presented in one dish in the shape of the Yin and Yang symbol. The Tai Ji supreme seafood soup is full of body and flavour, brought together to create a harmonious dish with a vegetarian shark fin soup – the two soups united to represent the sky and the earth. 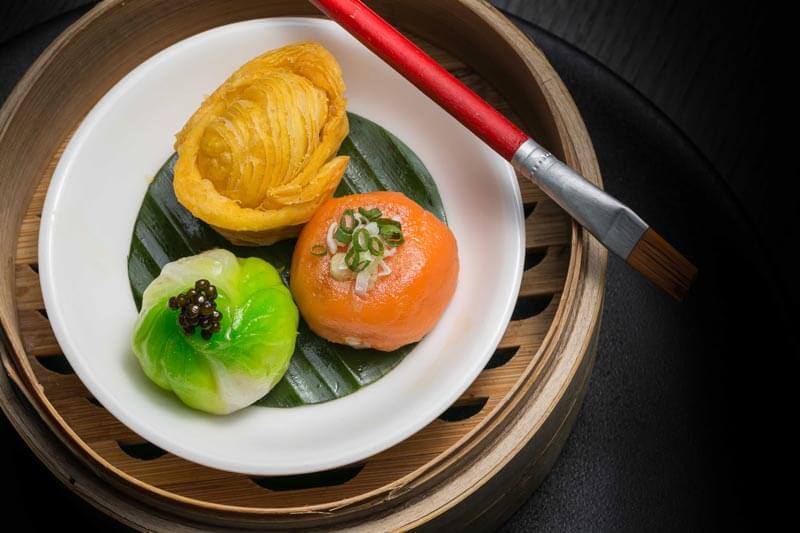 After this, there are delights such as a dumpling trilogy, with your own paintbrush to adorn the delicious little dumplings with soy sauce. The dumplings are a real highlight; pudgy, fresh, full of perfectly cooked vegetables, you cannot fault them. 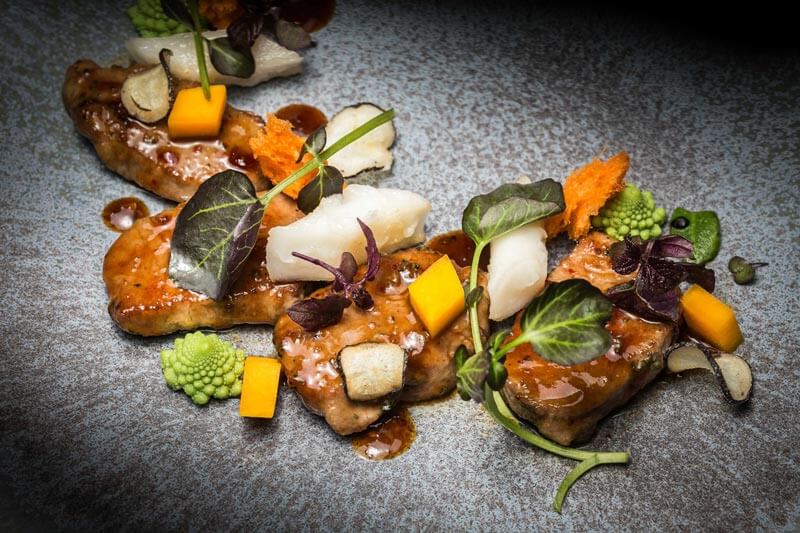 For veggies, the following courses include a crispy chia seed roll, which is soft and bursting with flavour, an unusual aubergine dish in a thick Chinese broth and a vegetarian lamb, made with seitan, in a mala sauce. 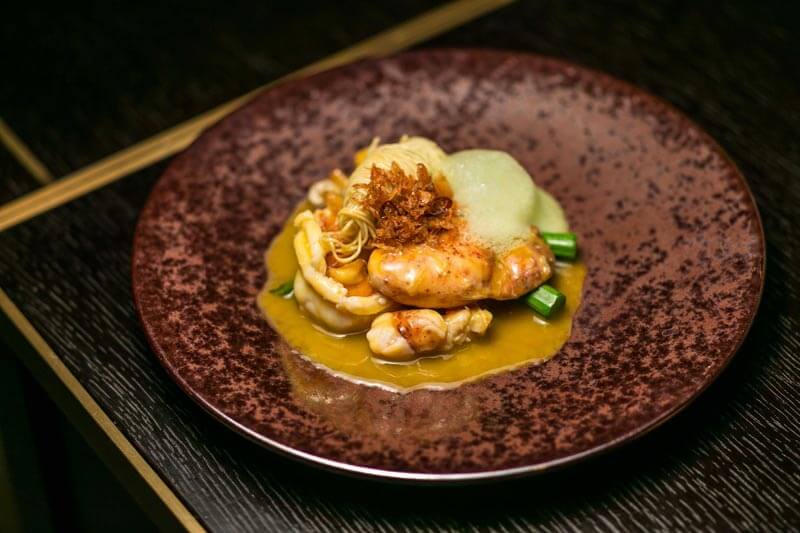 For meat-lovers, you’re in for a treat. You can feast on roasted Peking duck, served at the table, as well as lobster noodles in XO sauce, which is one of the star dishes here, as well as Sichuan lamb. Whichever menu you choose, you won’t be disappointed. 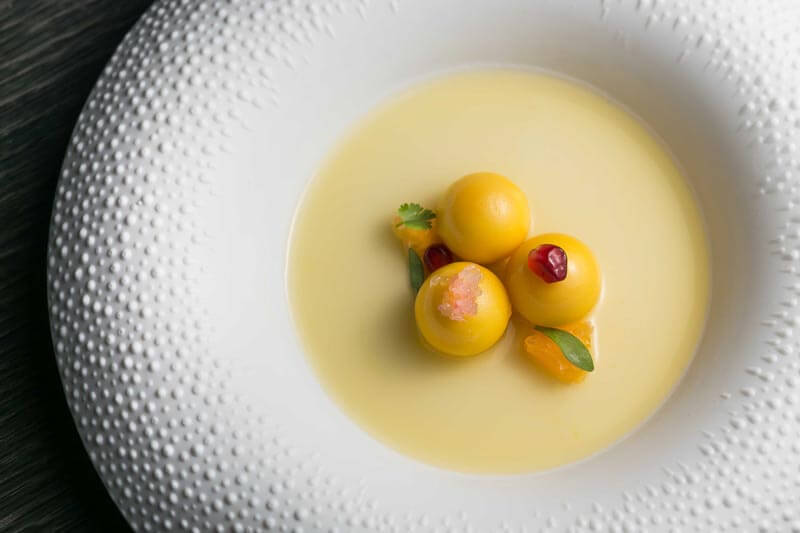 Both veggies and non-veggies unite for dessert – there’s vanilla and mandarin dumplings with an orange infusion, which are little bites of white chocolate heaven, and a delightful green apple parfait with cardamom cake and crispy apple noodle. The puddings are divine – and one of the highlights of the Chinese New Year menu here. 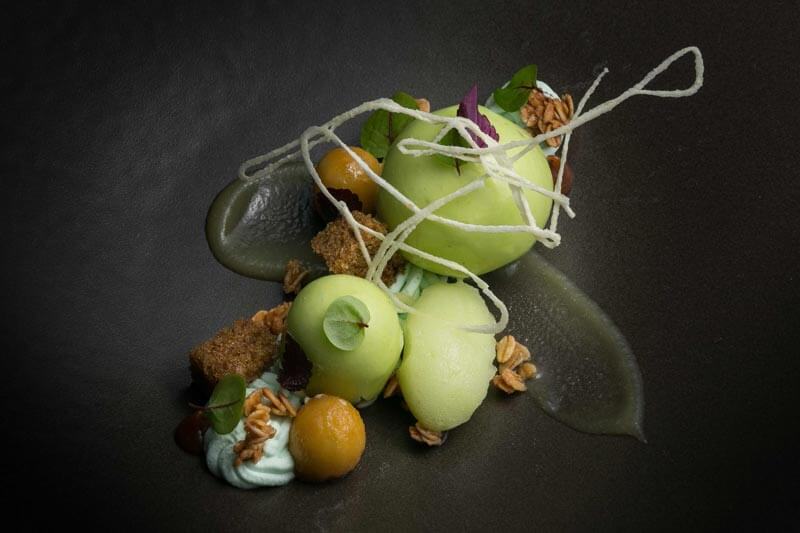 The menu culminates with a Tray of Togetherness, a customary dish filled with sweet treats and offered to guests throughout Chinese New Year with the aim of giving them a successful and prosperous start to the new year. 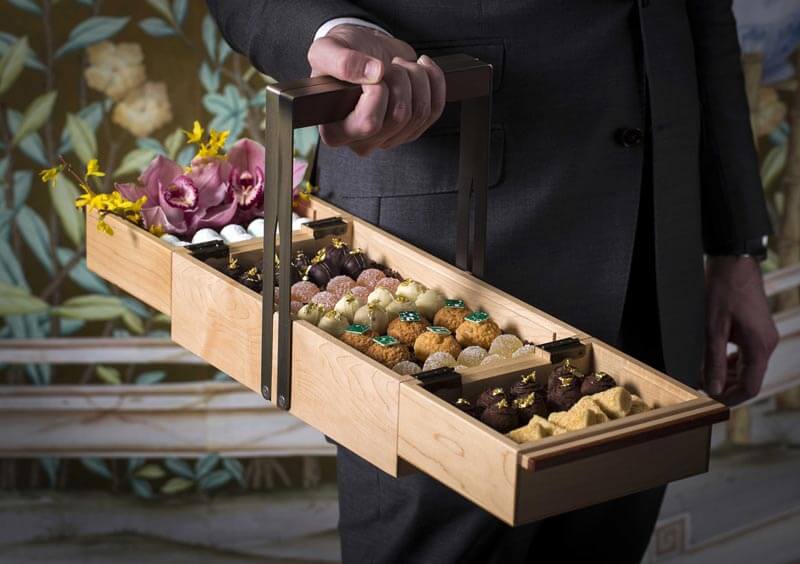 The tray contains eight different sweets as this is an auspicious number in China; inspired by Chinese ingredients they include jasmine tea shortbread, five spice financiers and orange jellies. This menu cannot be faulted – we demand you go try it for yourself.

The signature menu at HKK is available for £88 per person and will be available until 20th February.