Rewind 5 years ago, and the chances of locating a vegan chicken wing from a London restaurant/street food stall would be nigh impossible. But the vegan scene in the capital is forever changing. And growing. Now, we’re spoilt for plant-powered goods: burgers, fry ups, desserts…but there’s one fast food snack that provides happiness and flavours in equal measures, wings. In no particular order, here’s where to indulge in a good ol’ plant-based wing in London:

1. For Buffalo-Esque Wings: Temple of Seitan 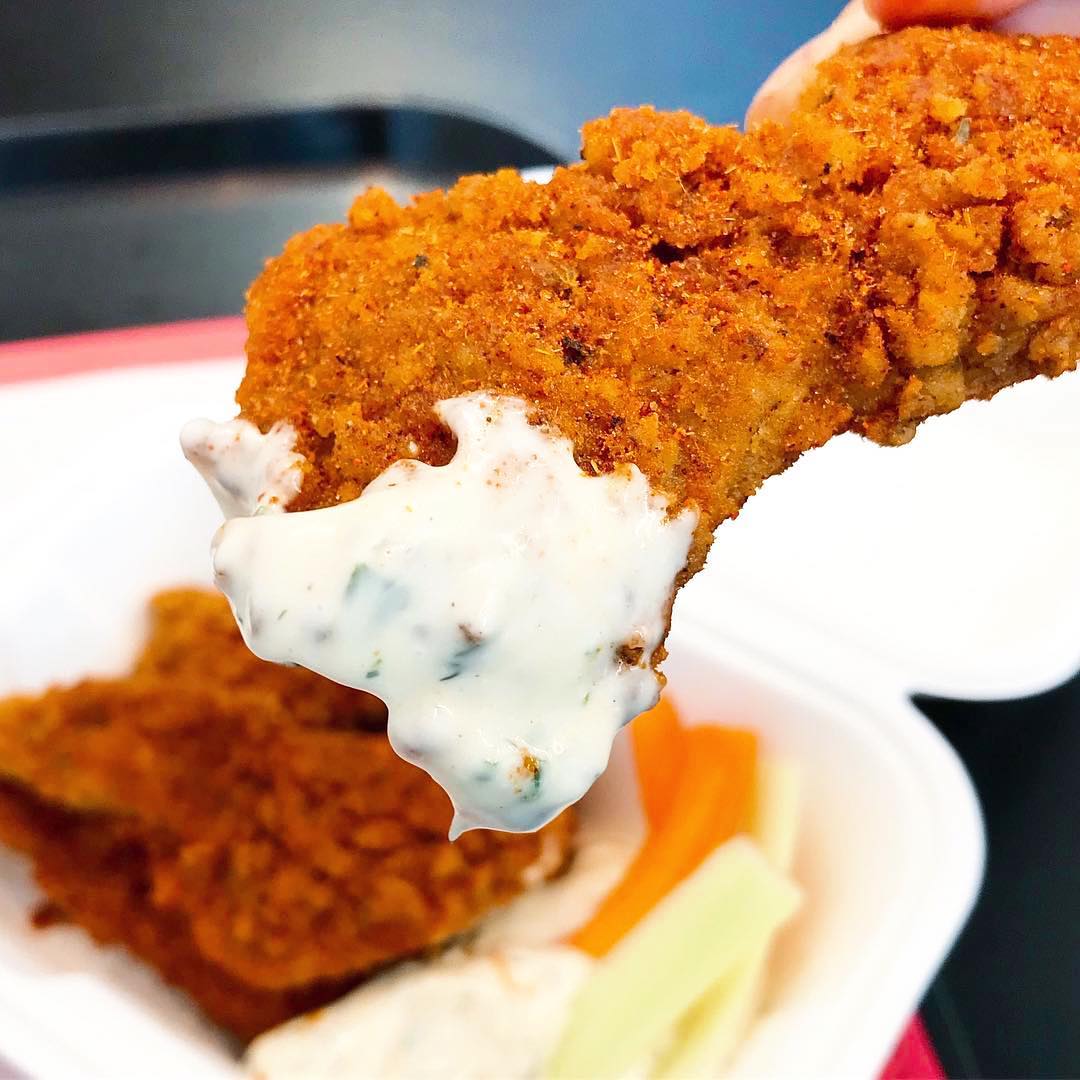 Order: 4 flavoured wings (Hot, BBQ or Buffalo), plus your choice of mayo

The Lowdown: Temple of Seitan are behind Temple of Hackney, London’s first vegan ‘chicken’ shop and the younger sister site, Temple of Camden. The team are the real meat-free heroes; providing hungry punters some of the most obscenely delicious vegan food in the capital. Take a bite of their crispy, fried flavoured seitan wings doused in hot sauce and choice of mayo, and tell us that it doesn’t taste good.

2. For Saucy Wings: The Full Nelson 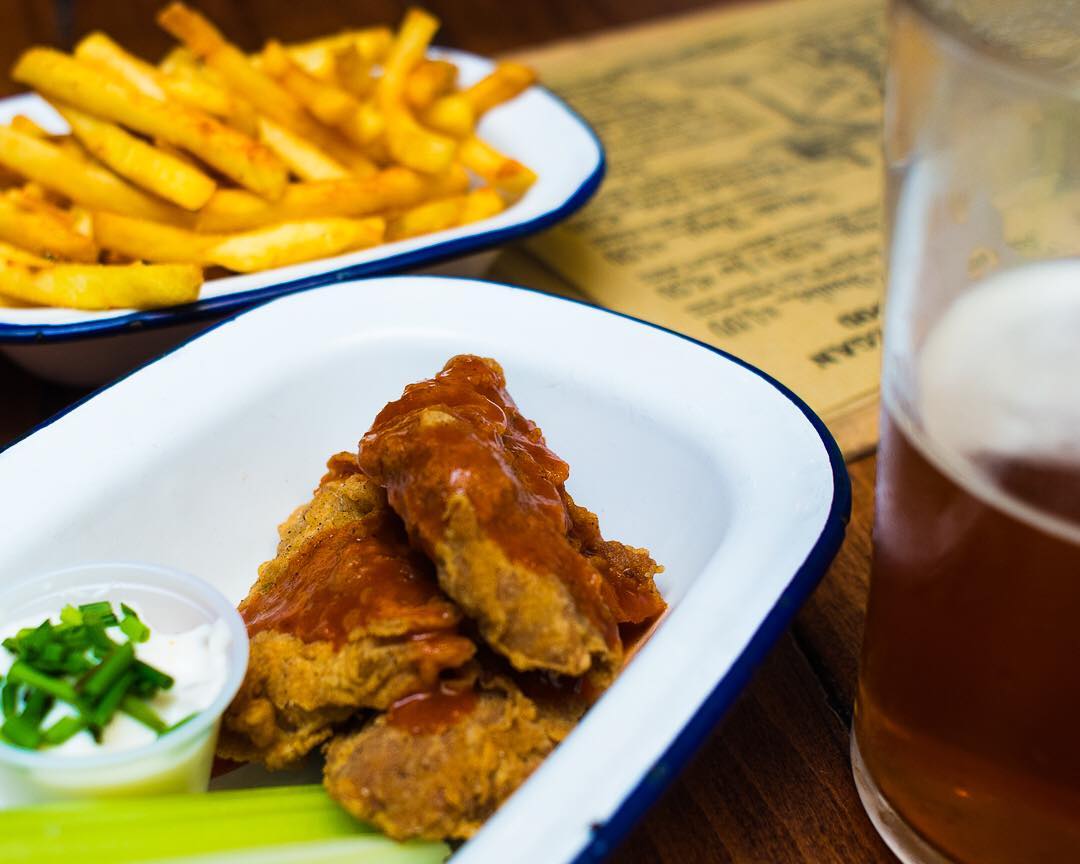 The Lowdown: For vegan junk food at its best (and filthiest), The Full Nelson is a mecca of tasty treats. And by tasty we mean juicy fried ‘chicken’ burgers, chips covered in a mountain of pulled ‘pork’ with lashings of coleslaw and pickles, and deep-fried Oreos. Fashioned from seasoned seitan, the wings are phenomenal: moist and perfectly spiced. The wings have that meaty texture, without an animal product in sight. 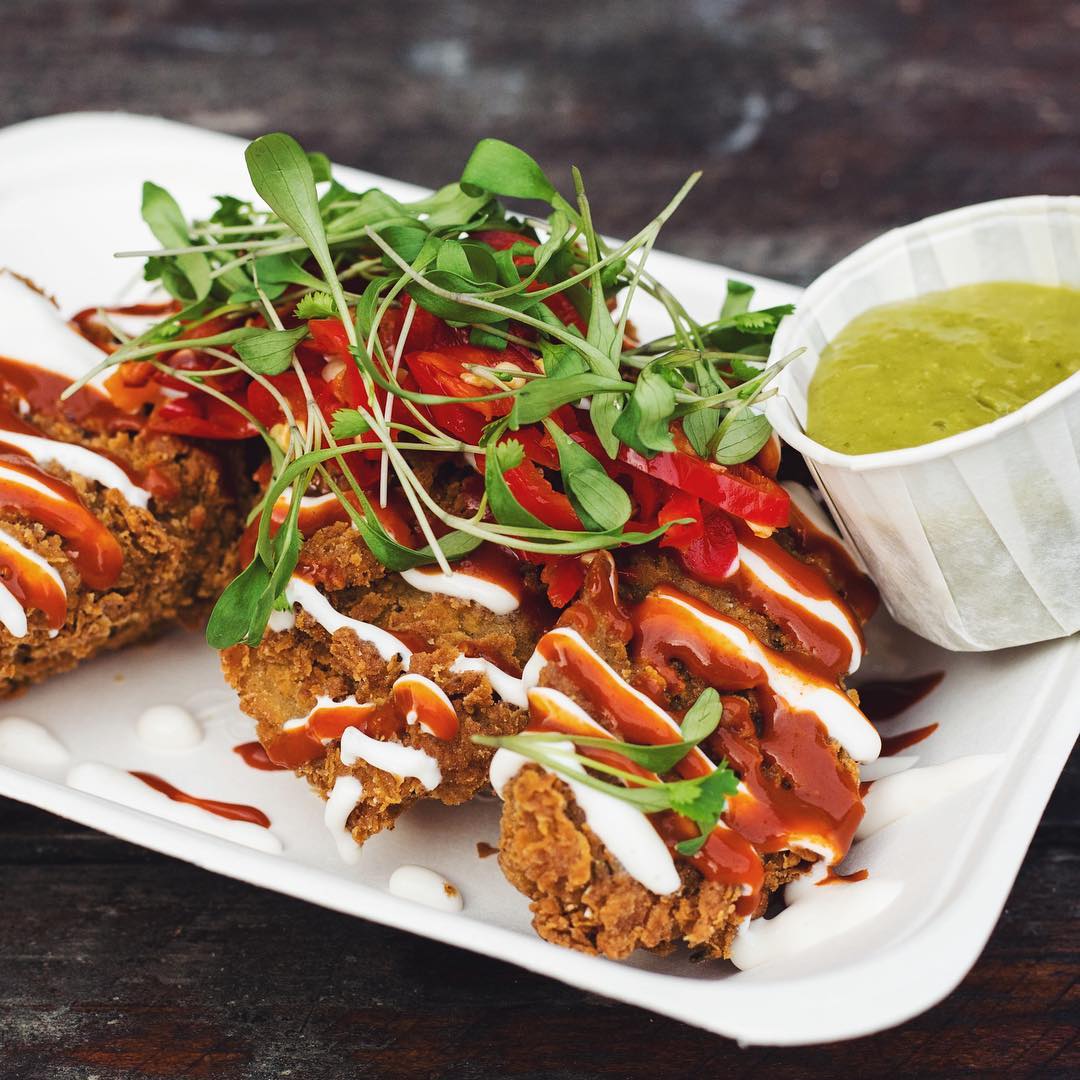 The Lowdown: Serving up some of the best vegan food in the capital, Club Mexicana’s grub has gone down a storm with the vegan and non-vegan community. Manning the kitchen at London’s first vegan pub, The Spread Eagle, and with an outpost at Dinerama, Shoreditch, the team serve their plant-based bites with aplomb. Big, bold and beautiful flavours, the Mexican wings have all the gusto of a regular poultry wing, and then some. 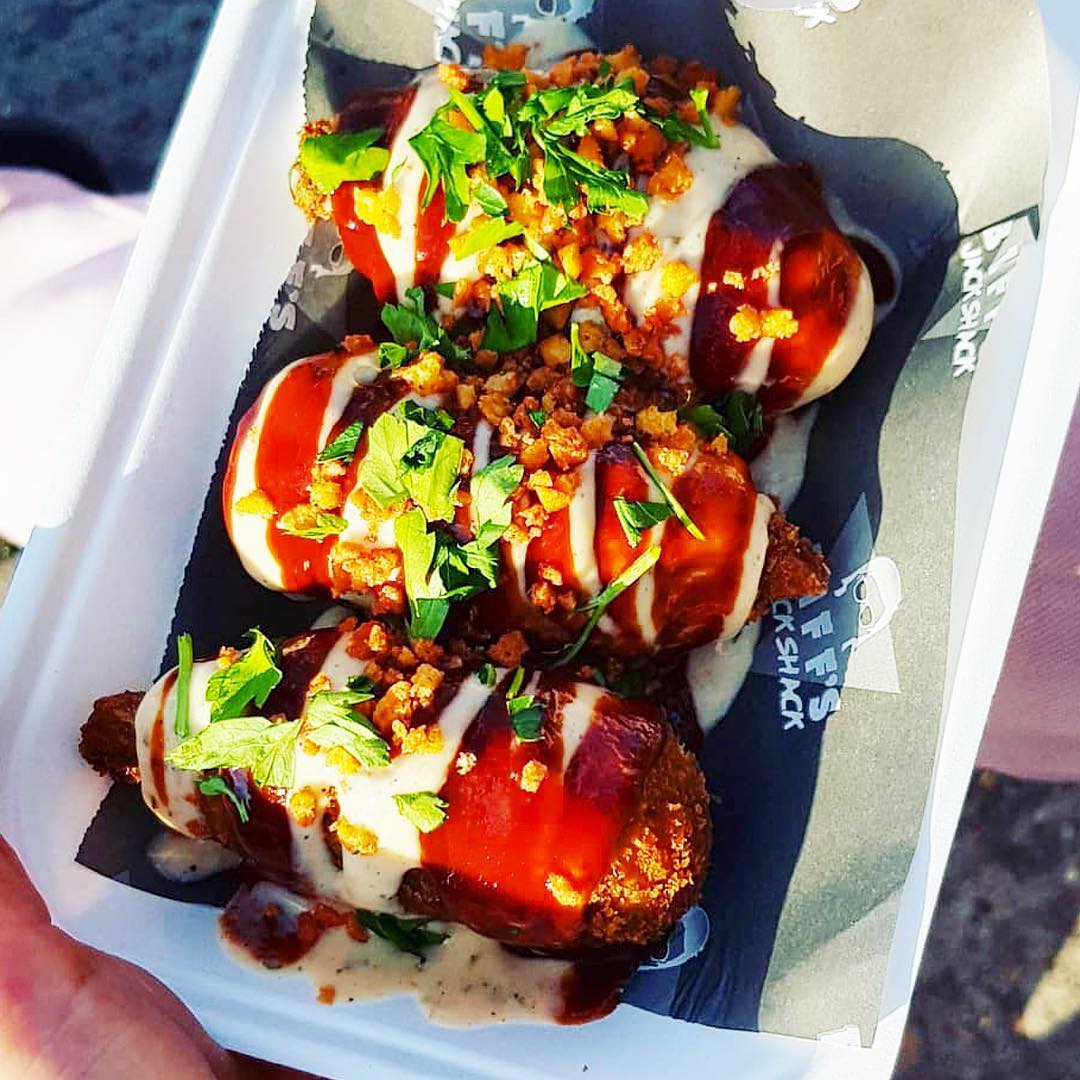 The Lowdown: The clan at Biff’s Jack Shack are wizards – because what they’re knocking up is pure magic. If you think vegan food is dull, you need to get your chops round their vegan junk food: it’s knock your socks off, great. These wings are oddly realistic – and the texture is that found in a wing bought from a late night chicken shop; crispy fried jackfruit, cooled with a creamy homemade ranch dressing, bacun bits for added crunch and torn parsley. ⁣ 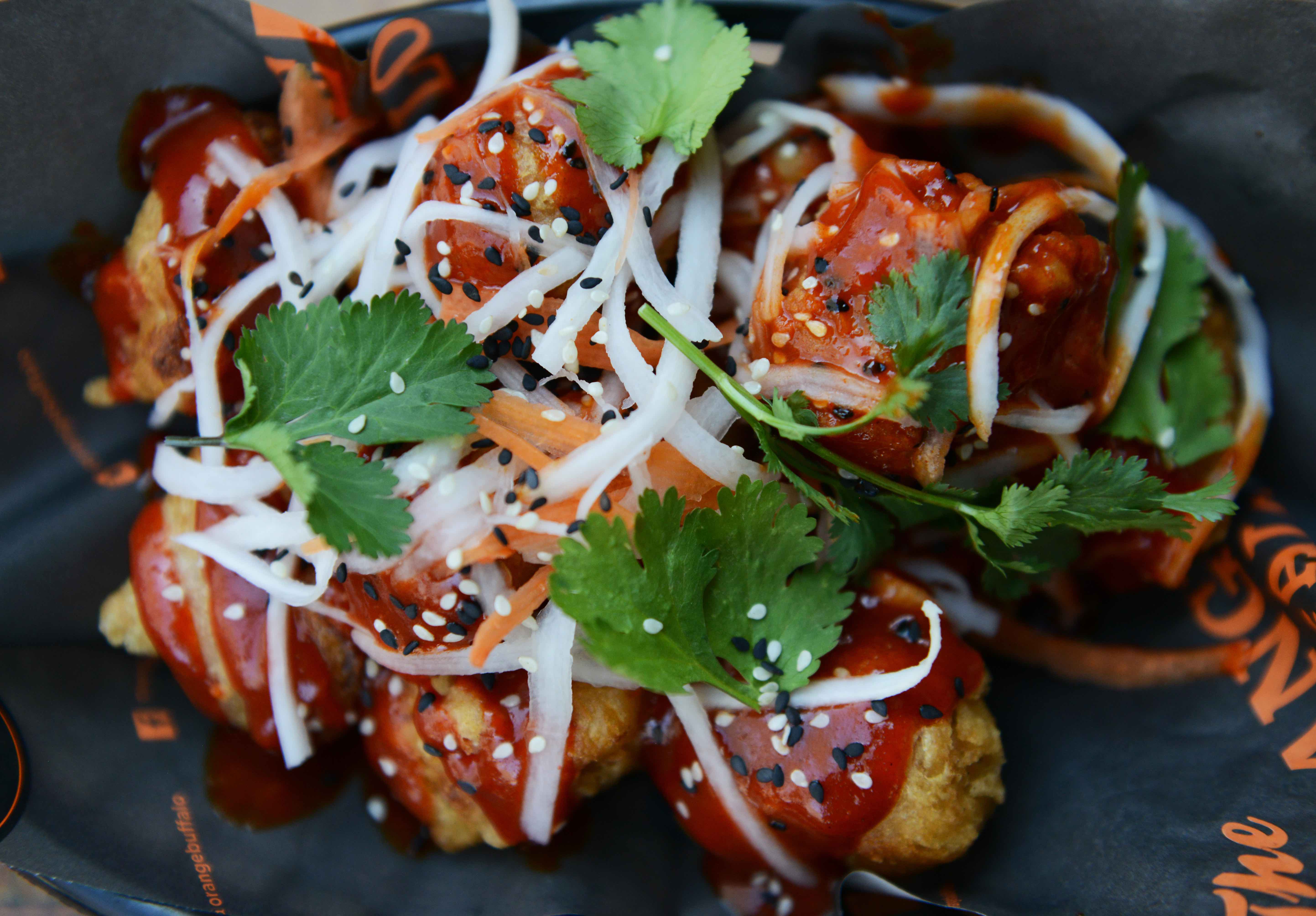 The Lowdown: Orange Buffalo are no strangers to meat. They’re the wing masters, the king of poultry. And yet, they’ve created a vegan wing that’s as good as its meaty siblings. The delicious morsels of deep-fried cauliflower are coated in Orange Buffalo’s K-Town sauce – a savoury spicy and slightly sweet blend of Gochujang paste – soy, honey, and sesame seeds.