Food / Features / About Time: You Made Burts Spanish Patatas Bravas with Chorizo Chips

About Time: You Made Burts Spanish Patatas Bravas with Chorizo ChipsBy Angelica Malin

Adore crisps? Ditto. So, this week, we’ve partnered with Burts for a special Burts Chips Week – expect lots of delicious crisp-themed features, recipes and a special competition giveaway. You can get involved with Burts’ Crisp Week by following them on Twitter here, Facebook here and Instagram here, and share your crisp love by using the hashtag #BurtsChipsWeek. 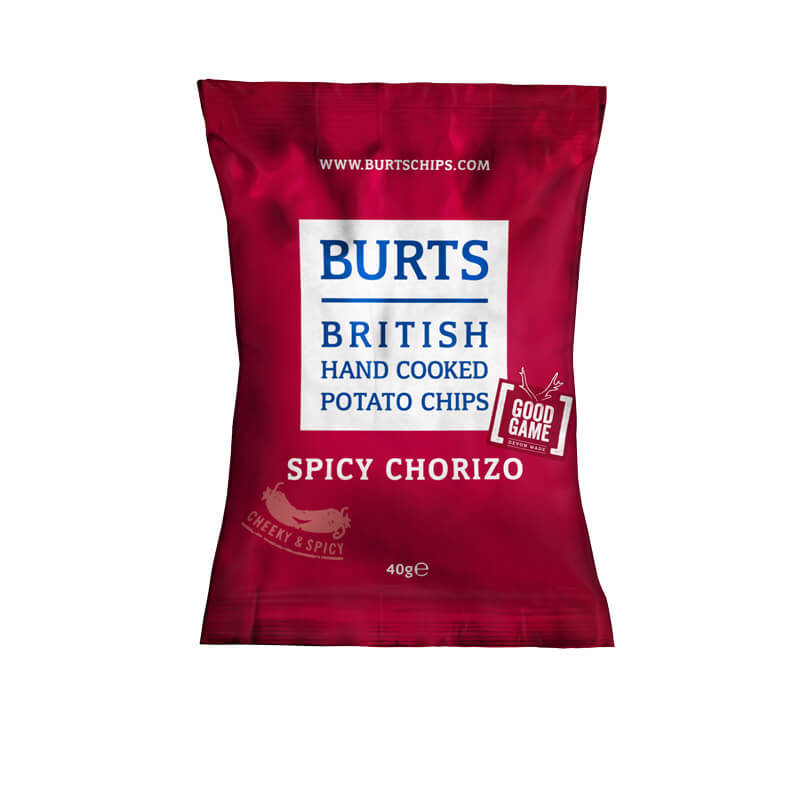 We love the Burts Spicy Chorizo crisps for a full-flavoured snack. Inspired by the crisps delicious flavour, Julieta Lucca has created a special Spanish-delight for your next tapas-themed feast: 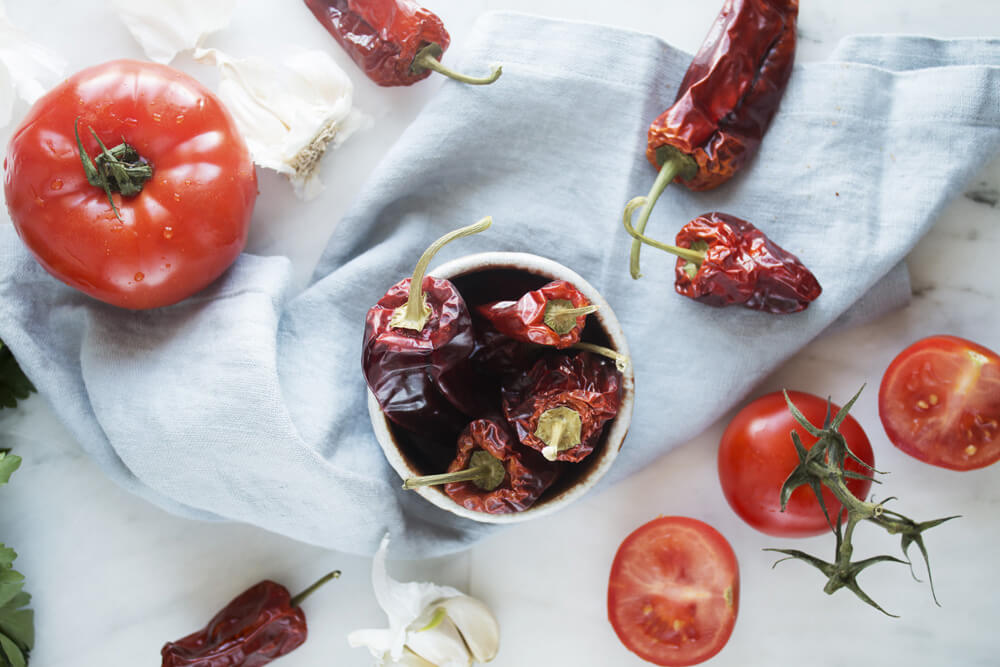 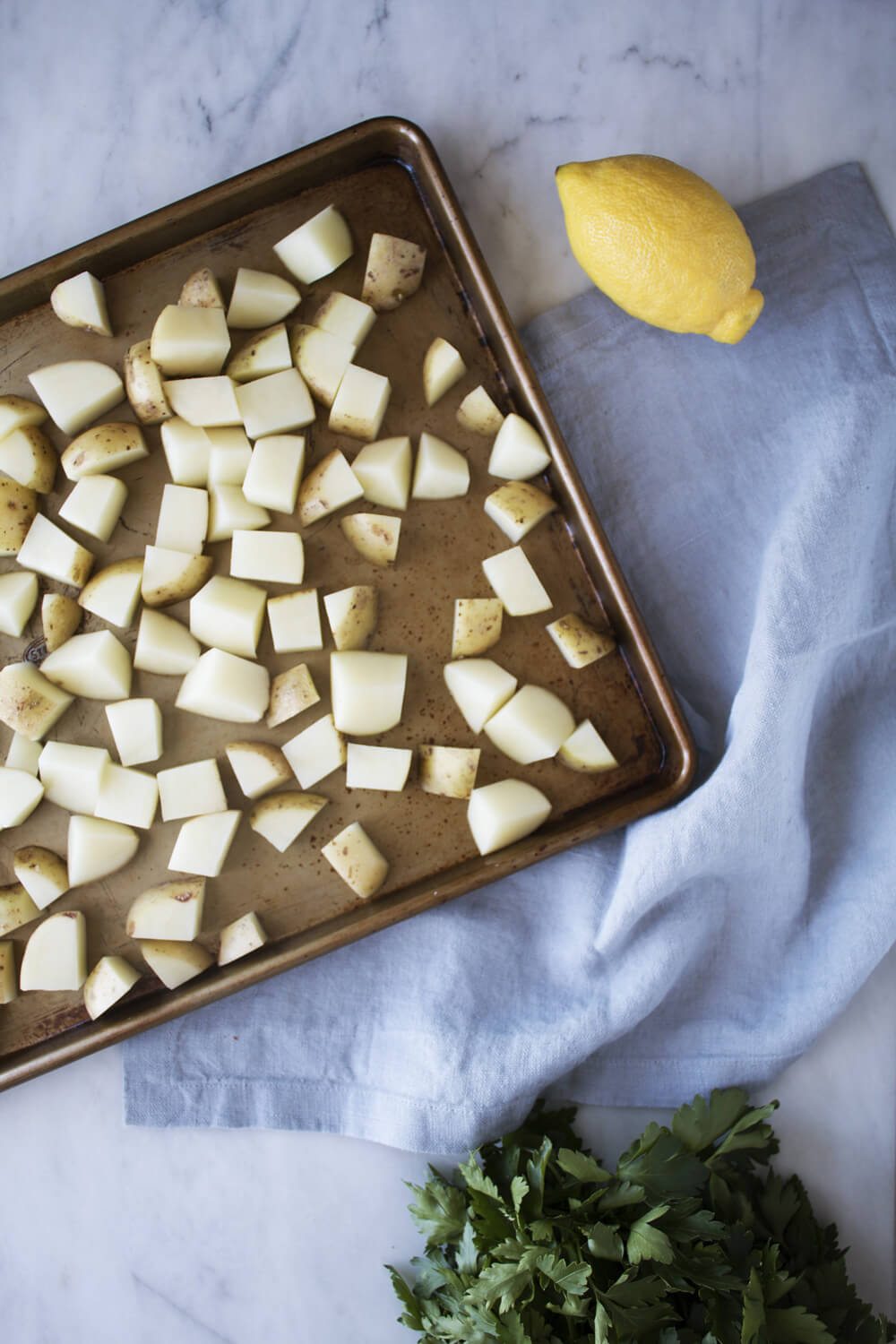 1. Start by preheating your oven to 200C. Peel the potatoes and cut them into 1 inch (2.5 cm) chunks. Traditionally, the Spanish fry their patatas, but today we are baking them. Lightly oil a baking tray with oil and place the patatas on the tray.

2. Measure 1 tsp olive oil and sprinkle it over the patatas, massage well until they are all thinly coated with oil. Make sure the chunks are not clumped together but well dispersed on the tray. This will ensure all the patatas get a nice golden and crispy crust on them.

For the Bravas Sauce: 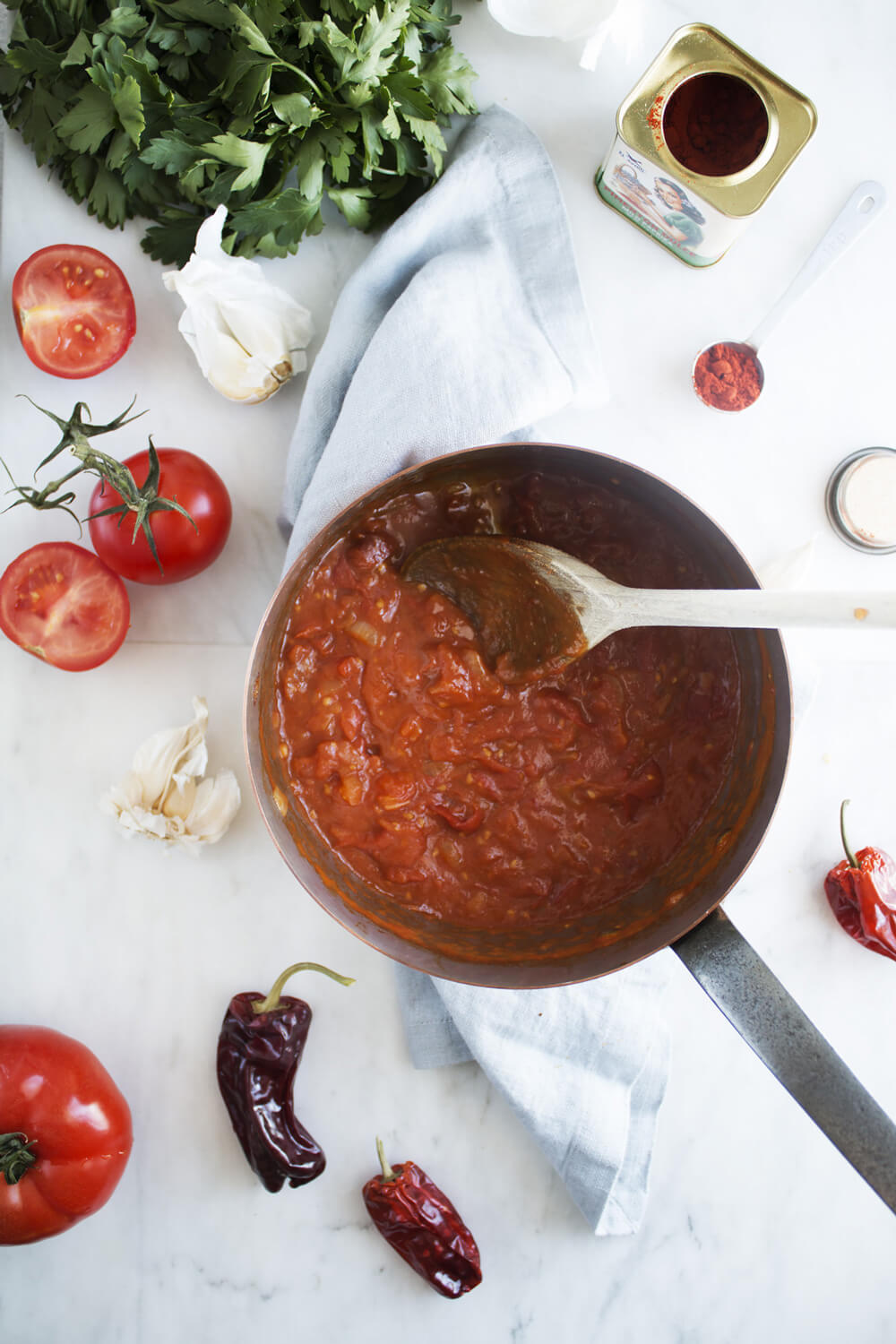 1. Take a pan and place it on the hob over a medium-low heat. Add two teaspoons of olive oil to the pan followed by the finely chopped onions, garlic and dried chillies. Note, you may take the seeds out of the chillies so the sauce is not too spicy.

2. Let it cook for 6-8 minutes or until the onions become translucent. Once cooked, remove from the heat and stir in the sweet paprika (depending on how spicy you want the sauce to be, you could add hot paprika too). 3. Add the chopped tomatoes and sugar. Mix thoroughly before returning the pan to the heat and let it simmer for 5 minutes.

4. While the sauce is simmering, combine the flour and the 100 ml of  water and slowly stir it into the sauce. Mixing flour with water (or any other liquid) prior to adding to a hot mixture prevents the flour from clumping when it comes in contact with a hot liquid.

5. Mix well and let the sauce simmer for about 15-20 minutes to reduce. Add salt and pepper to your taste and mix well. Once done, set aside to cool down. Once cool you can keep it in an airtight container in the fridge or freeze it. 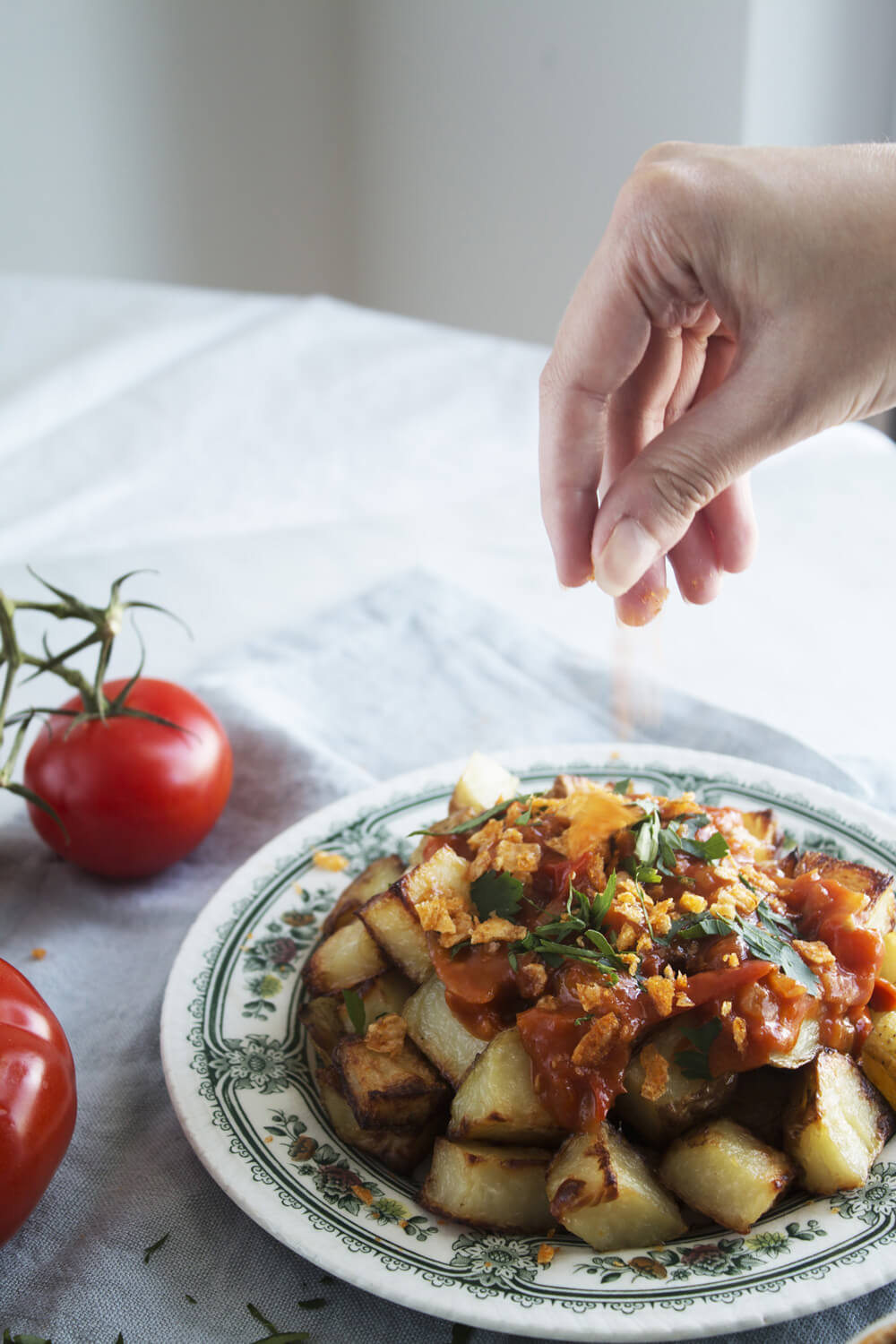 1. Lightly crush the chips with your hands into a ramekin. Make sure there are still rice grain-sized bits so they add an element of crunchiness to the dish.

2. You could also add the chips to a pestle and mortar and ground them. 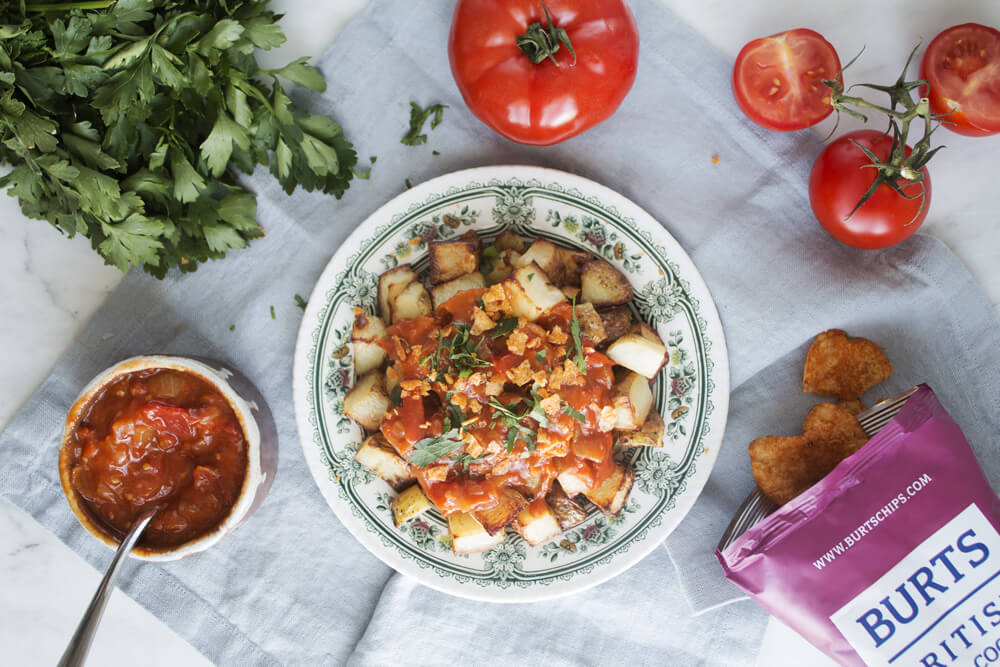 To serve: Place a mountain of patatas on a plate. Douse a generous amount of your bravas sauce on top of the patatas followed by  a small sprinkle of finely chopped parsley and a handful of the Burt’s Spicy Chorizo Chips Crumb Dust. You’ve got yourself a winner!