Food / Features / Reviews / 5 of the Best: Vegetarian Meals in London

5 of the Best: Vegetarian Meals in LondonBy amelia richards

Whether you’re attempting meat-free Mondays, flexitarianism, or full-blown veganism, we have some right good restaurants for you to try. And they’re not your usual veggie go-tos. So do your bit for the planet and your bod and give our pick of the best vegetarian meals in London a go: 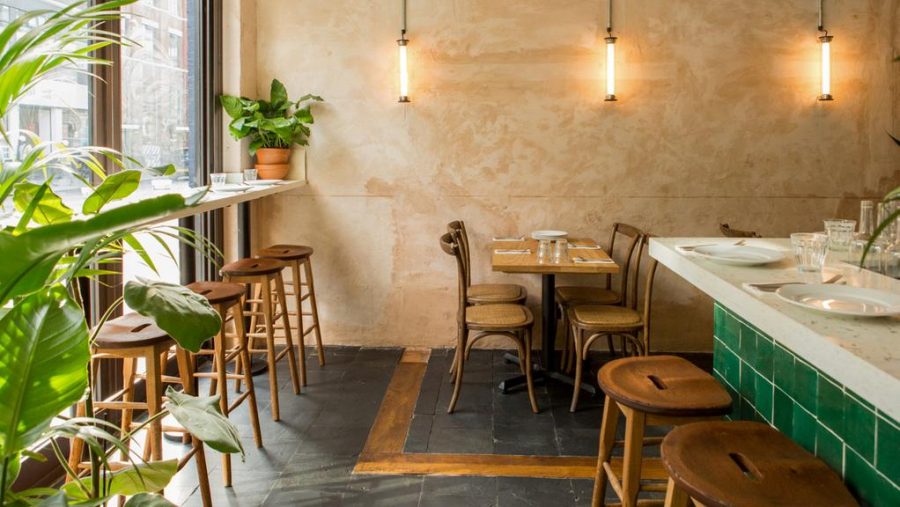 Everything on the menu is totally dee-lish. The team behind the like of The Palomar, the Good Egg and Coal Office have officially done it again with Bubala! Big time faves included: the ‘Pumpkin ‘Tirshy‘ with Harissa, Preserved Lemon & Olives’; ‘The Fried Aubergine (always the fried aubergine) with Zhoug & Date Syrup’; the ‘Ful Medames with Lovage Pesto, Yoghurt and Homemade Malawach‘. We could go on! Oh, wait, we will – you must make sure you get yourself a side of ‘Confit Potato Latkes, Toum and Aleppo Chilli’. Desserts are all divine too and the Tahini, Date & Tangerine ice cream will be like nothing you’ve ever tried before. 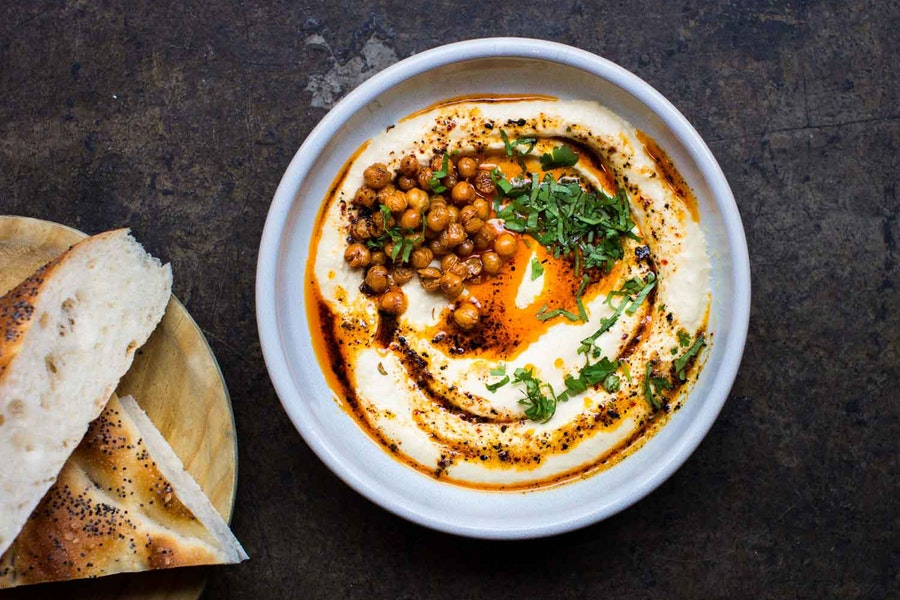 We enjoyed some pretty snazzy veggie food from the latest outpost of Chucs. The newest branch is in Kensington, just a stones throw from the V&A, Natural History Museum, and Royal Albert Hall, and boasts a gorgeous terrace area which is heated throughout the winter so you ogle the passers by and – if it’s anything like the day we were there – their very fancy cars.

We shared the ‘Jerusalem Artichoke Veloute with Autumn Truffle’ (oh, hello!) and the ‘Sicilian Aubergine Caponata’ to start, both of which were delicious, seasonal and hearty, and then a ‘Pizza alla Norma’ which came piled with aubergine (more aubergine, I know, I know) and mounds of salty ricotta. The courgette fries were also something that I would definitely write home about. Divine. 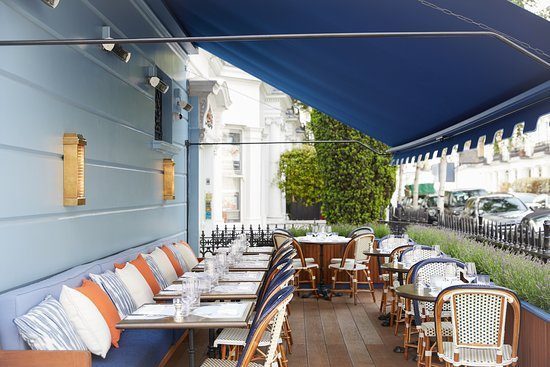 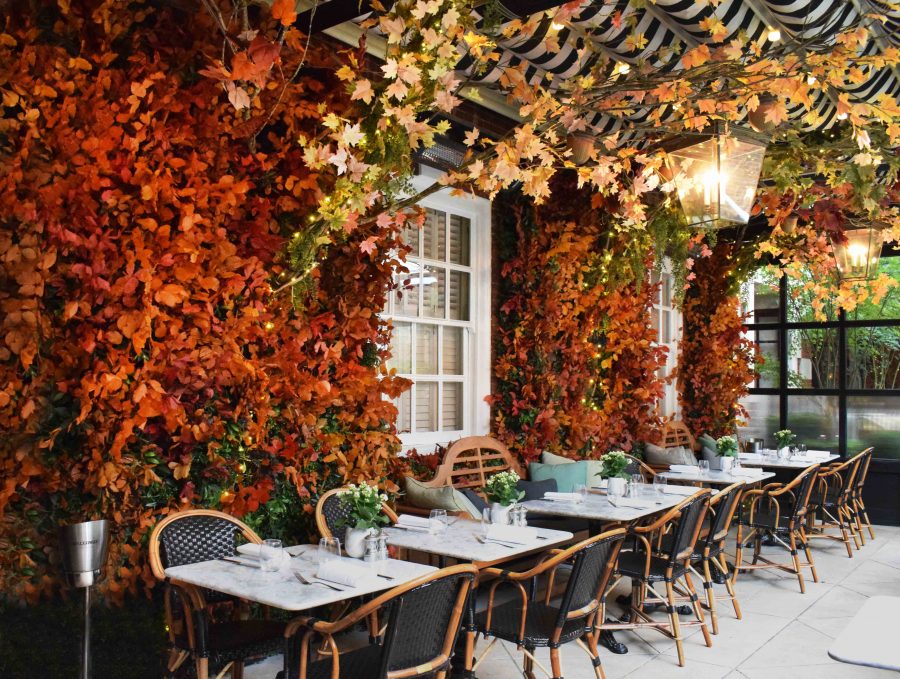 Next, our hunt for best vegetarian meals in London led us here. The biggest crowd-pleaser on this list, Dalloway Terrace, knows how to create a vibe. Every season they deck their heated indoor-outdoor terrace with plants and seasonal touches, and this autumn is no different: your hair will get caught in the amber and gold leaves that line the walls but that’s fine because it looks beautiful. Dalloway Terrace is probably the most instagrammable location on this list too, come to think of it.

As I said, they aim to please the crowds of central London with their diverse (yet refined) menu. We ordered veggie Thai Rolls, Tostadas, Burrata with flax crackers and a cheesy-feta based courgette soup (sounds weird; totally worked) to start and then split a Thai Green Curry with Tofu and a Wild Mushroom Risotto. Okay, so we ordered a lot. We had just been shopping on Oxford Street all day but, hands up, we did have to pass up dessert. This was done reluctantly as the vegan ‘Chocolate and Coconut Pannacotta and Honeycomb’ that arrived at our neighbour’s table as we rose to leave looked off the chain! 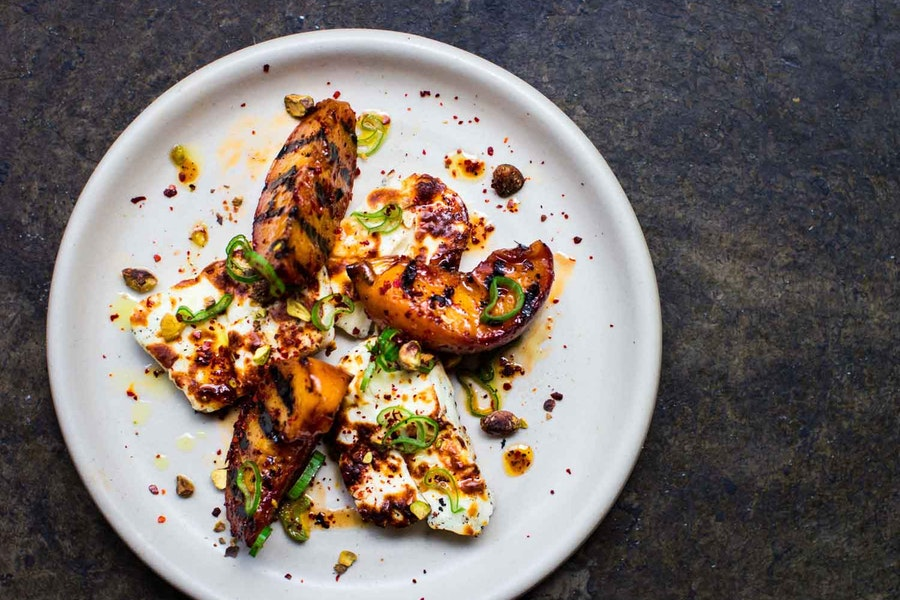 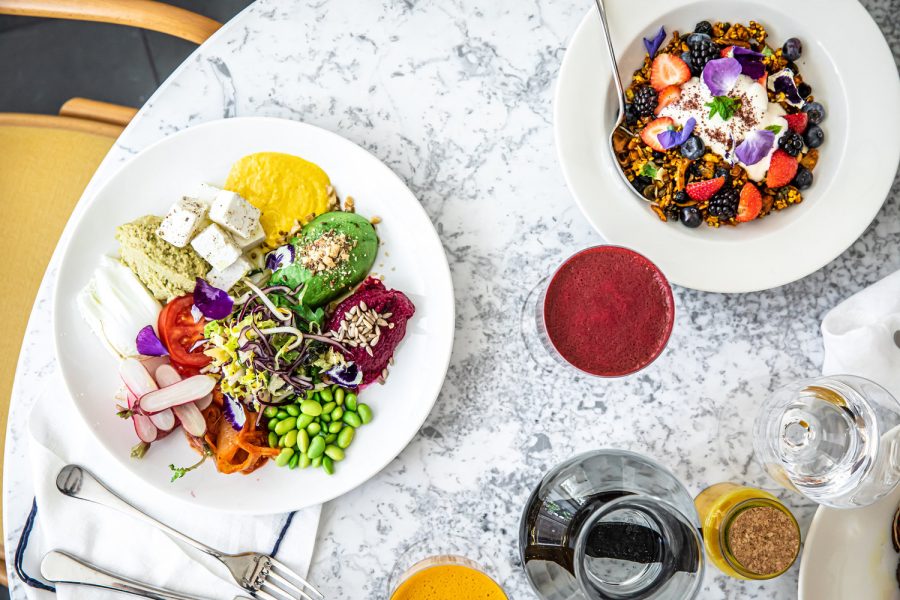 There’s a small selection of vegetarian options available at this new Belgravia eatery but, boy, do they pack a punch. Everything on the main menu is pretty healthy, and the two vegetarian ‘bowls’ are no exception. The ‘Green Bowl’ (of course there’s a Green Bowl – we’re in Chelsea)) is chockers with avocado, a soft egg, feta, beetroot hummus, and a creamy lemon and cashew dressing. Then there’s the – sounds similar but actually very different when it arrives at our table – ‘Vegetarian Rainbow Plate’ which avocado again, but this time alongside beetroot, sprouts, feta, hummus, radish, edamame. Both are delicious, filling, and given that it’s a lunchtime when we go, we are grateful for the healthful zing they give us. Definitely preferable to the post-lunch sandwich-slump we’re used to.

But, wait, we ruined it. We couldn’t resist the restaurants signature ‘Banoffee Banana Bread’ which is served with whipped mascarpone, dulce de leche and banoffee ice cream. They tried to plie us with vegan chocolate cake too, but we just couldn’t take it. It is worth mentioning though that their rotating ‘bake of the day’ is always totally vegan. 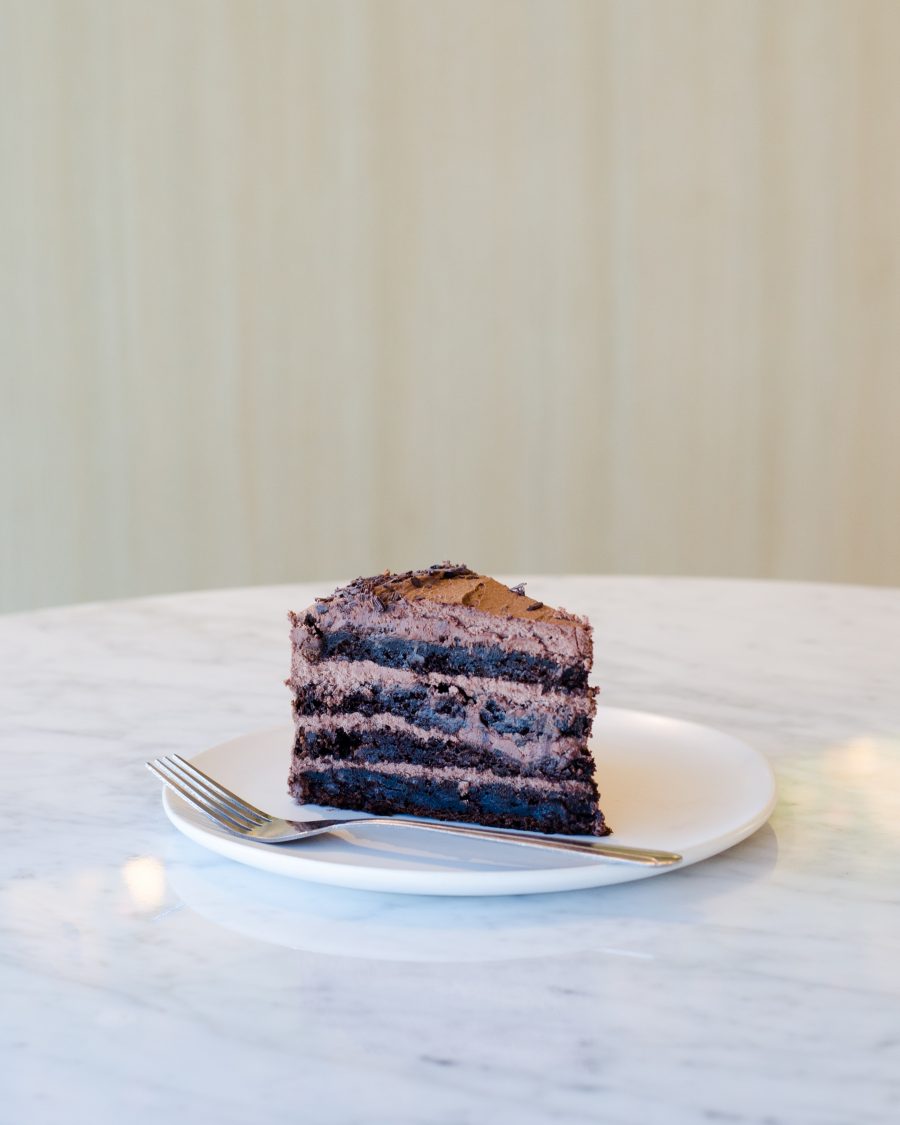 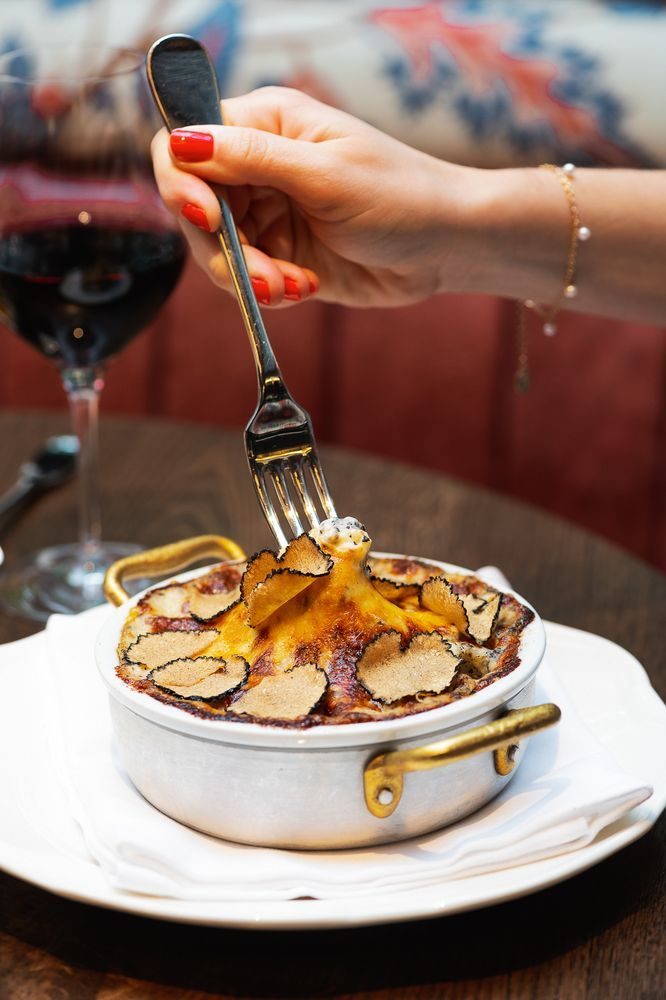 Truffled Mac & Cheese! Obviously. Goes without saying. Done diddly. They do a damn good job at this new Mayfair Brasserie. And with Victoria Beckham and Browns Hotel as neighbours, they kind of have to!

I mean this was really was – I’m almost certain – the best truffled mac I’ve ever had, but they had a zillion other delicious vegetarian offerings too, all of which were totally divine.

Take, for example, the ‘Truffled Asparagus’ with mustard dressing, crispy crutons, seasonal leaves and almost-too-much-but-not-quite-too-much parmesan. Deelish. Also the ‘Butternut Squash and Ricotta Ravioli’ which comes with toasted cashews – nice touch! – and deep-friend sage leaves. Really, it was all just great. But, and this was a tricky decision to make, my winning dish was the ‘Crumbed and Bakes Artichokes with Shallot Puree and a Herb Salad. Doesn’t sound like much, perhaps, but the creamy sweet allium combo, combined in each and every mouthful with the salty, garlicky bread-toasted crumble was just so more-ish, I literally went back the next day. Definitely one of the best vegetarian meals in London.

Moncks is an absolute winner.

Amelia is Digital Editor at About Time. Trying out new restaurants is her M.O., and she would travel the length and breadth of the Earth for aubergine-anything. Her perfect weekend involves eggs, walks, and an undisturbed meeting with the Sunday papers. That’s probably all you need to know.