I can honestly hold up both hands and say I didn’t have a bad meal in New York. You’re positively spoilt for choice. And like London, New York’s foodie scene is thriving – it’s a myriad of high-end restaurants to street eats, and reputable chain restaurants (there’s good reason why there’s three Umami Burger hangouts, seriously). But there’s a downside to there being so much choice – you never want to settle, you always think there’s some better round the corner, and sometimes the grass in greener on the other side (street). 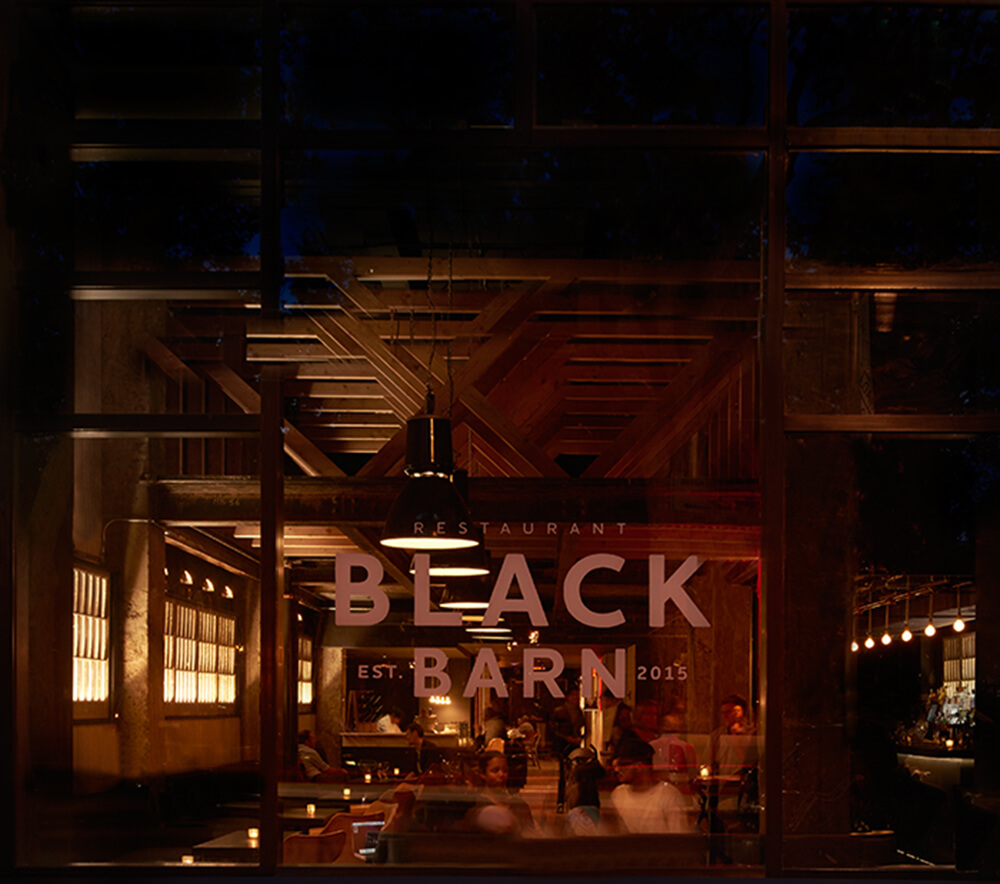 If you’re planning a trip to New York, make sure Black Barn is on the top of your restaurant list. If you like meat, this eatery will answer all your beefy prayers. To this day, I still talk about my evening spent at Black Barn. It’s a very special place and deserves all the praise. Here’s the run-down: 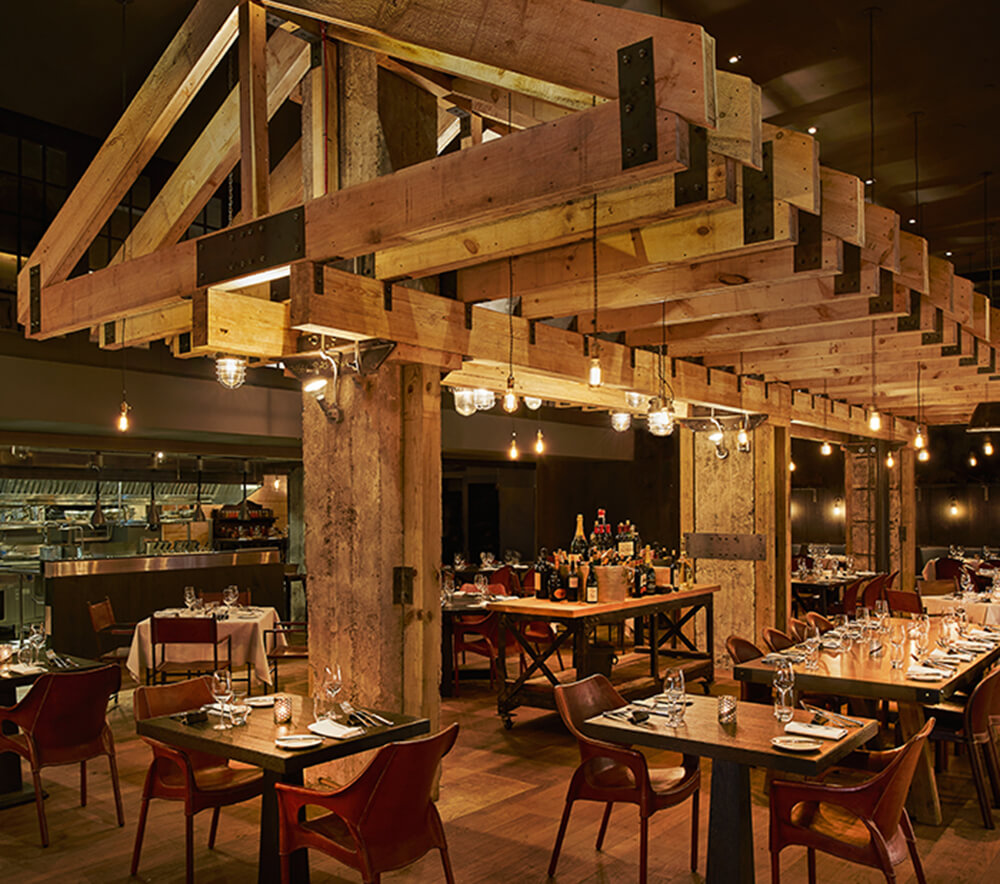 Black Barn is a stones throw from the Broadway district, off fifth avenue. Located just so, Black Barn isn’t teeming with shopping bags and weary tourists. You see, Black Barn has already won over the native New Yorkers with their casual dining, farm to fork dishes. 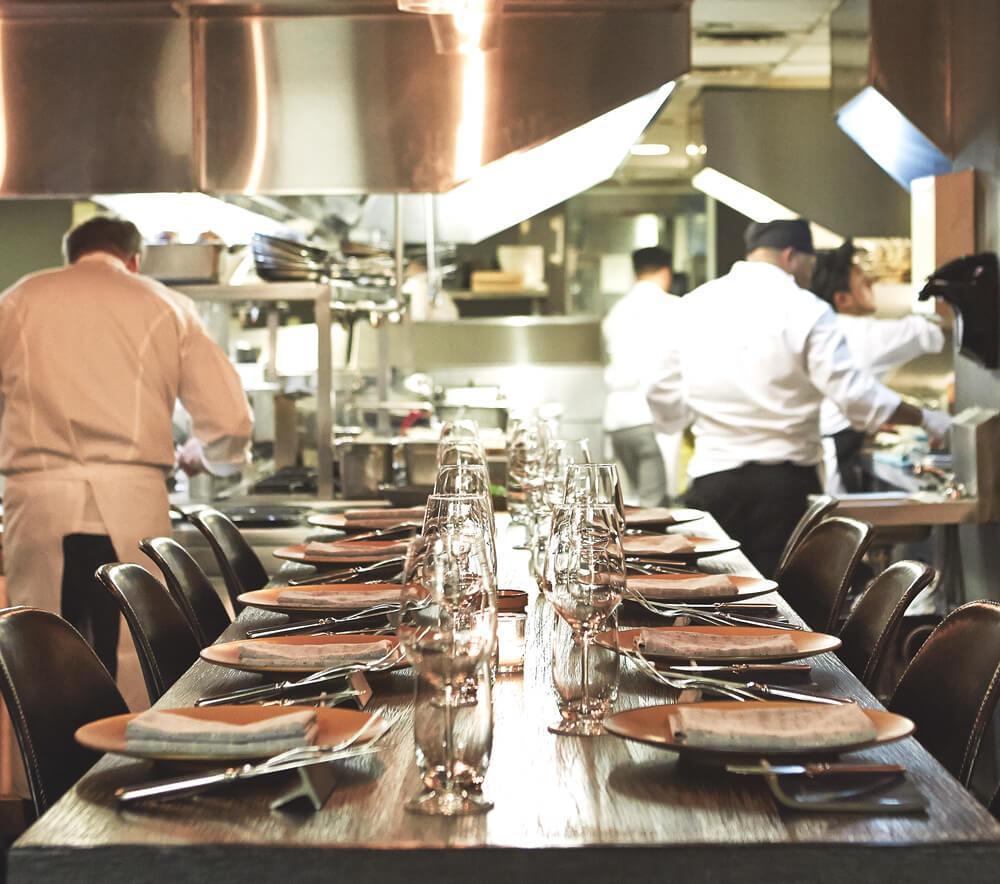 As the name suggests, the restaurant has been inspired by the barn houses of Long Island’s East End. Think vaulted ceilings with wooden beams, rustic wooden tables and hand stitched seating. From the open-plan kitchen the team of chefs prepare seasonal fare, with ingredients sourced from local farmers, producers and artisans. 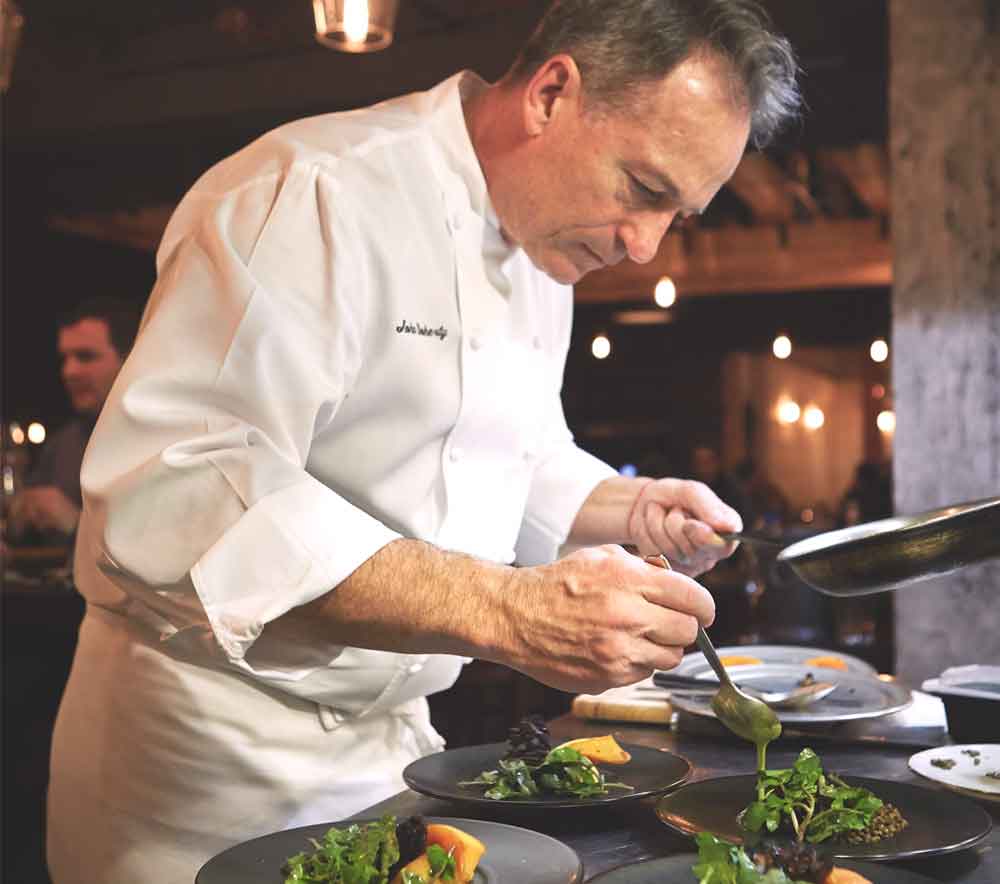 Open in 2015 by chef and owner John Doherty along with his childhood friend, Tom Struzzieri, this is Doherty’s first  venture, having spent a large amount of his chef career heading up the kitchen at the Waldorf-Astoria. With such credentials, you expect the food to be of a certain calbire – and it is, it really is. But instead of concept and petri-dish sides, you’re served wholesome grub, that’s full of flavour. Black Barn really is a winner. 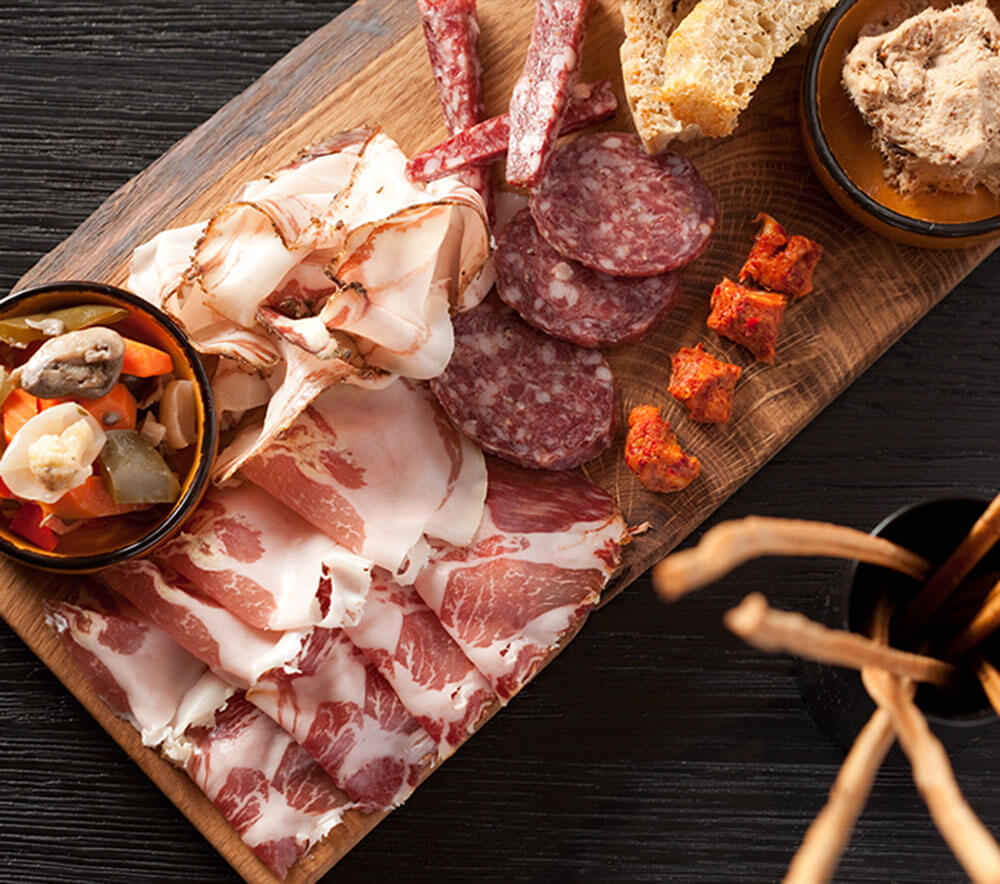 The menu is full of American classics, with a modern twist. I may have mentioned that Black Barn are known for their meat, but the menu is full of a fantastic selection of dishes suitable for vegetarians. The same amount of love has been put into the veggie dishes as the meat – no one leaves this restaurant disappointed.

If you like to share your food, start your feast with the white pizza. It’s so cheesy and delicious – the pizza is topped with cheese fondue, mangalitsa spicy coppa and arugula, before drizzled with truffle oil. The pizza is pretty rich, but you can’t help but throw back those slices. If there’s anything I learned from dining at Black Barn – it’s to go hard, and don’t home. I still regret not eating all the pizza. And if you’re one of those people who’s not a fan of sharing, the kale salad is a light and refreshing option. And while salads are seen as a ‘bum-out’ option for a starter, the kale salad was like nothing I’ve tried before. The kale had a lovely crunch, full of flavour, with roasted acorn squash and radicchio weaved through the crispy leaves. The salad was tossed in an apple cider and buttermilk; the creamy dressing really worked with the bitterness of the kale. 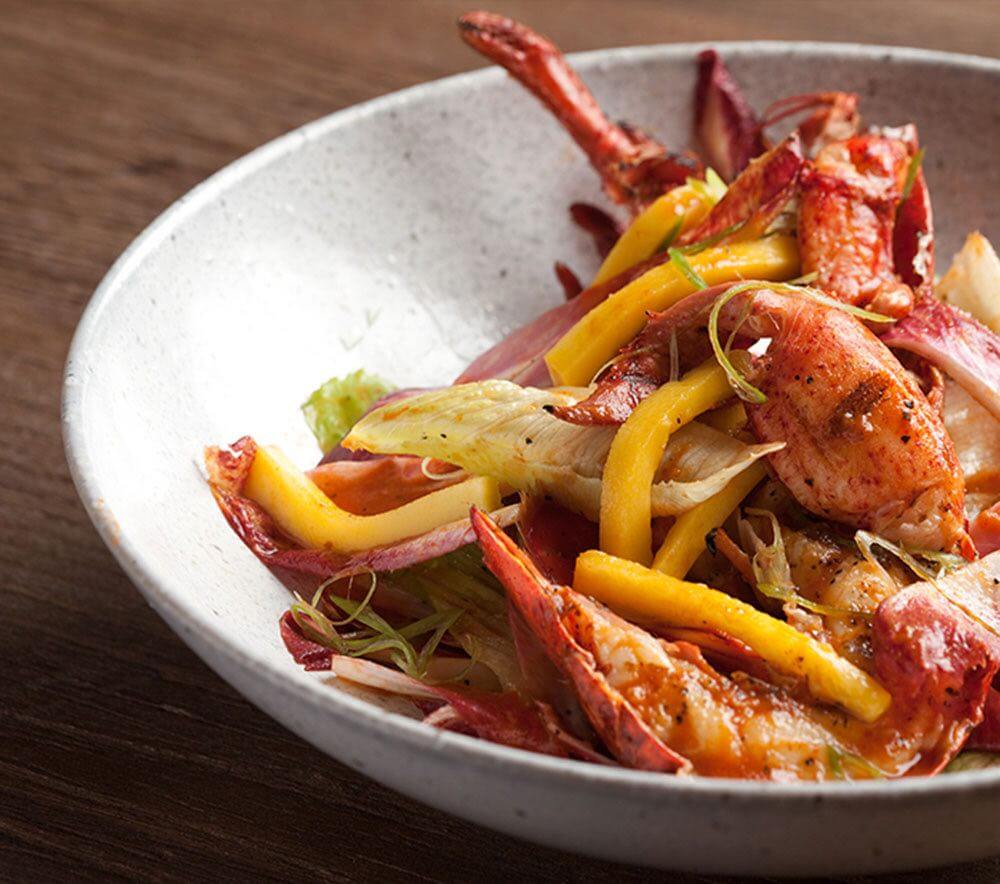 If you’re a lover of all things leaves, the one pound Maine lobster salad is another stand-out starter. These little morsels of lobster were ludicrously good. Lobster. Mango. Thai curry dressing. It’s like the chef saw found some left over ingredients in the fridge and decided to throw them all in a bowl, and hope for the best. But the thing is, the lobster salad was such a surprise, but for all the right reasons. The sweet mango and the spicy curry added a wonderful back-flavour to the salad. This dish really showed off the skills of John and his team; inventive, without being too out there. 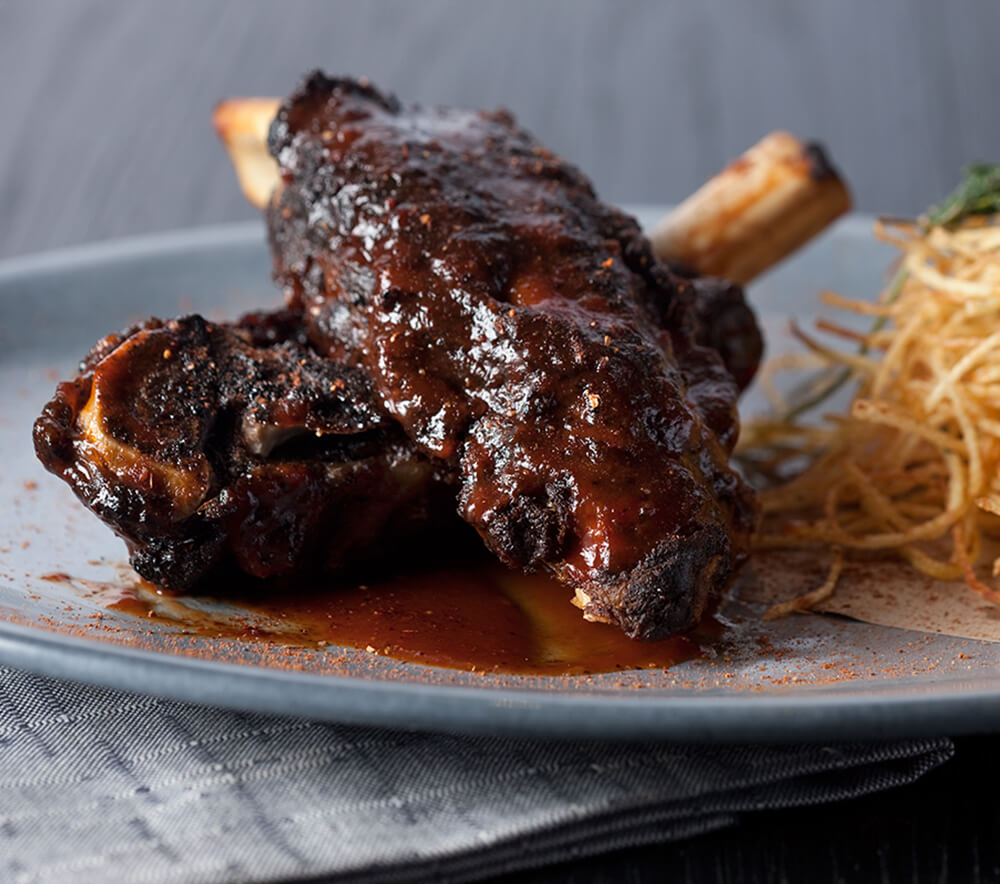 The main event. The reason why I love Black Barn so much. I’ll be honest – I couldn’t decide between the dry aged Angus rib-eye or the BBQ beef ribs. Naturally, I ordered both. Yes, if you’re wondering – I finished them. The rib-eye was perfectly cooked, and extremely tender. The meat really benefited from the charoal grill adding a wonderful smokey taste. The bbq beef ribs? The best ribs I have ever eaten. Hands down. The meat fell off the bone, I didn’t need to cut it – it’s the ribs you can only dream about. At Black Barn, they made my dreams a reality. Go and try these ribs for yourself. 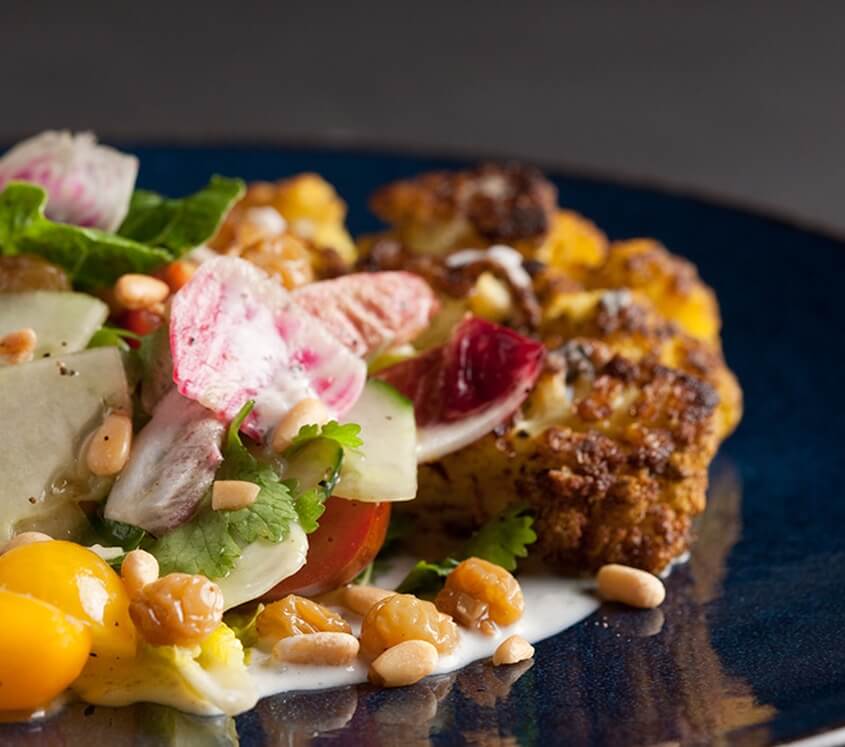 As previously mentioned, Black Barn really excels in the veggie department. The curried cauliflower steak was nothing I’ve ever tried before, because you can’t quite believe it’s cauliflower. Props to the kitchen team for making what I find a relatively bland vegetable into a flavoursome, hearty main. The toasted pine nuts adds a delicate crunch, with the pickle raisins adding an extra tang. A real winner of a combination. 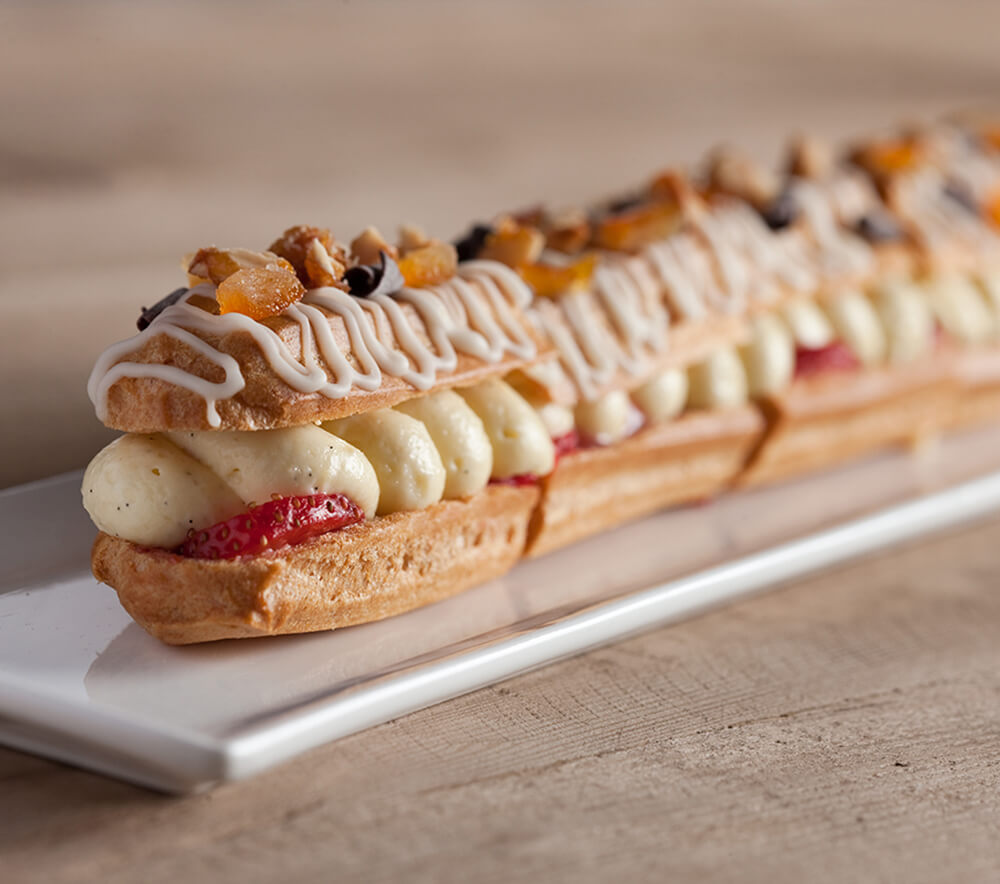 The dessert is the final hurrah at Black Barn. The final glorious hurrah, where you unbutton your belt and sink into your chair. When the waiter offers you the dessert menu, decline and just say ‘I’ll take the cinnamon doughnuts.’ Because these little sweet, bread-y wonders are little mouthfuls of pure happiness. The sweet cinnamon casing reminded me of the doughnuts you buy at the seaside – so moreish, so divine.  Like any good doughnuts, these were served with a caramel sauce. Believe me, by the end of it, these doughnuts were slathered in the stuff.

Another dessert highlight was the orange-vanilla éclairs. Not my usual dessert of choice, but these eclairs were filled with homemade vanilla cream and strawberries. The dessert is super light and utterly divine.

Black Barn has it all; from great food to a warm, intimate atmosphere, it’s a fail-safe dinner spot for couples, dates and loved ones alike. The menu has something for everyone, with great vegetarian, meat and fish options, and you’ll be surprised by the playfulness of the menu and the ingenuity with which they approach flavour combinations. John Doherty and his team deserve high praise for this Modern American restaurant, they’ve truly outdone themselves. When I’m next back in New York, Black Barn is going to be my first port of call. Keep the short rib warm, John. I’m coming.