London / Whats On / About Time: You Celebrated the Best of Thanksgiving in London 2019

About Time: You Celebrated the Best of Thanksgiving in London 2019By Francesca Brooking

It’s Thanksgiving this week (28th November) and whether you want to celebrate with a cocktail or traditional meal, here are the top Thanksgiving events in London 2019. From Jack Daniel’s cocktails to American Football, we’ve got you covered:

1. For a Whiskey Feast: Thanksgiving Feast at HIX’s Tramshed 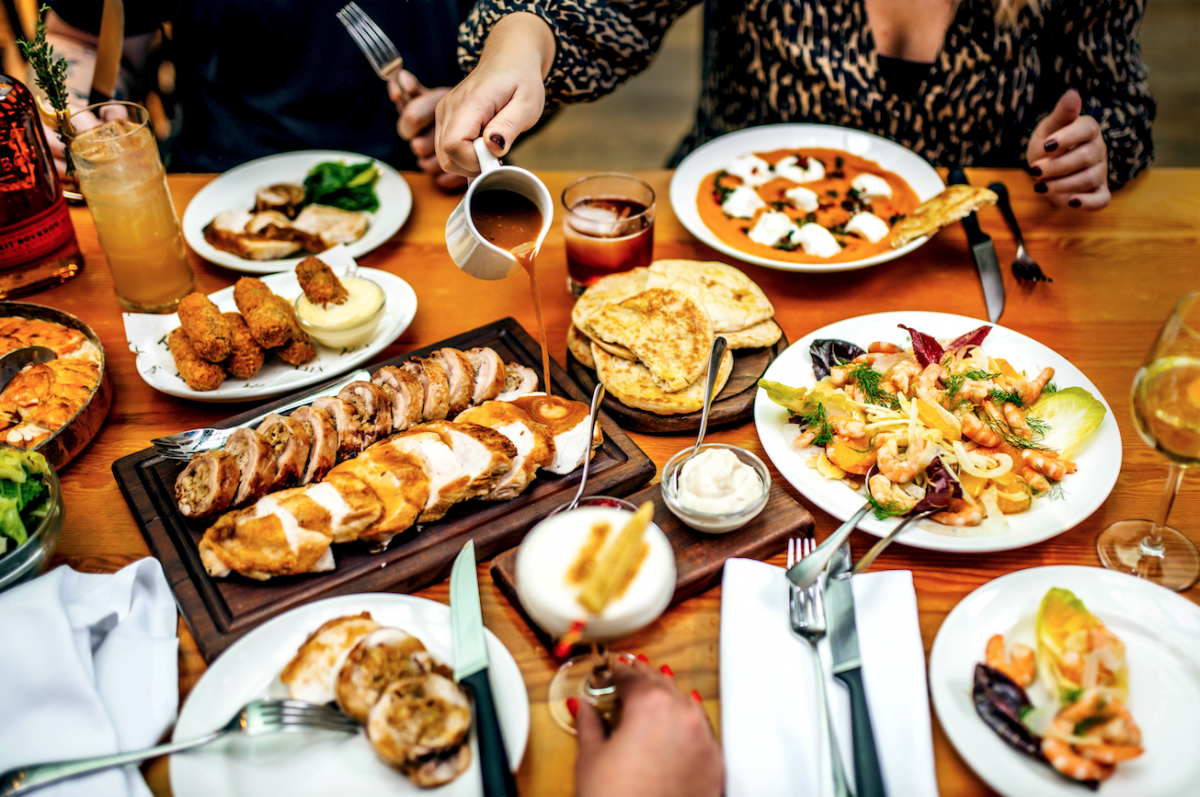 What: We think the Thanksgiving Feast at HIX’s Tramshed with Bulleit Frontier Whiskey is one of the best ways to celebrate Thanksgiving in London 2019. Bulleit Whiskey and East London based HIX Restaurant Tramshed are pairing up to host a delicious feast to celebrate the holiday.

The Lowdown: Guests will be treated to a Bulleit Milk Punch cocktail before taking their seats at one of the long tables in preparation for the arrival of the American-style banquet. The menu is inspired by the social aspect of the holiday with its selection of sharing dishes for starters, including sugar pit beef croquettes with Bulleit mayonnaise, as well as whipped pumpkin with White Lake goats’ curd and pumpkin seed relish, alongside a fresh Atlantic prawn salad with orange and shaved fennel. The main course will be a traditional roast, with stuffed Swainson House Farm turkey and cranberry sauce, accompanied by sweet potato gratin and buttered autumn greens. Finally, guests will be able to tuck into a Bulleit Bourbon and pecan tart with Neal’s Yard clotted cream. Every dish will be paired with a Bulleit Whiskey cocktail and favourites include a Potato Whiskey Sour and a Fennel Iced Tea.

Price: From £65 per person. Book your tickets here.

2. For a Nostalgic Burger: Thanksgiving Burger at Wahlburgers 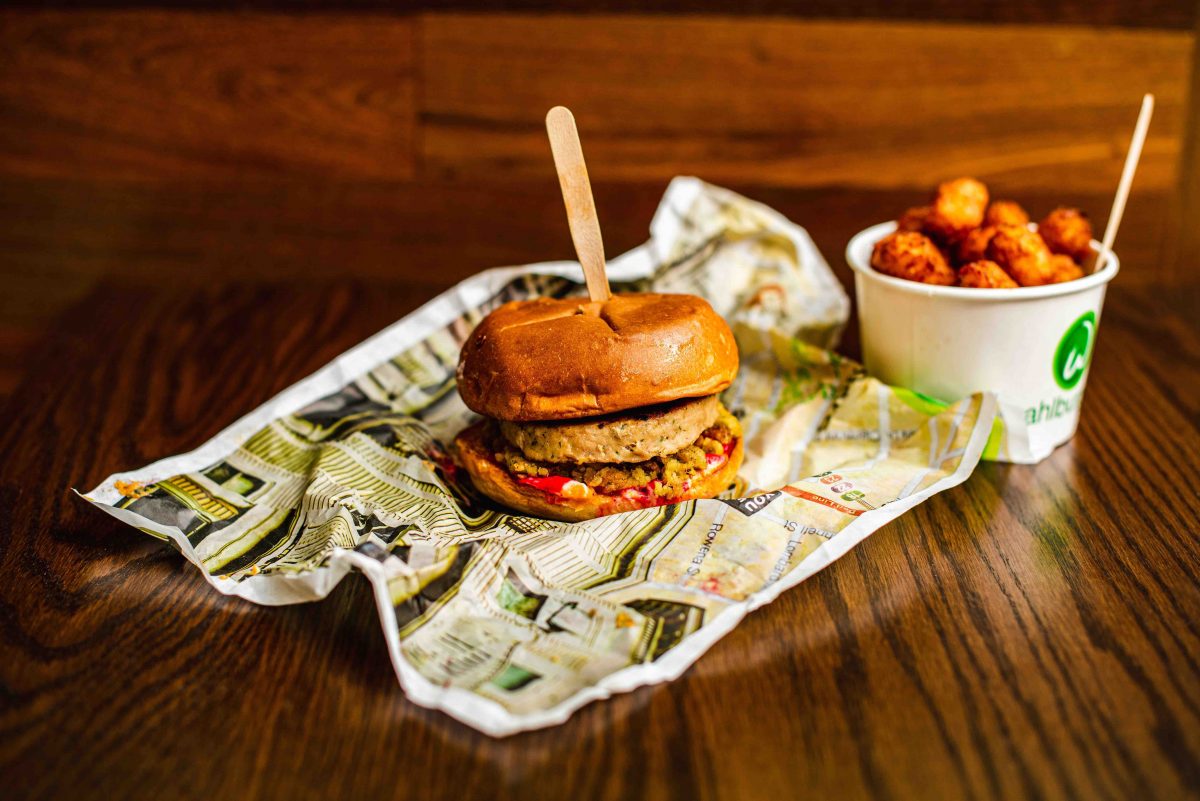 The Lowdown: The burger is made with 1/4 lb. freshly ground and seasoned turkey burger topped with stuffing, mayo, housemade orange-cranberry sauce and roasted butternut squash. It’s rumoured to be Mark Wahlberg’s favourite item on the menu because it was inspired by his memories of mealtimes at his family home. Any diner who orders this burger will receive a complimentary drink and any American citizen with a valid passport will receive a slice of delicious homemade pie on the house. 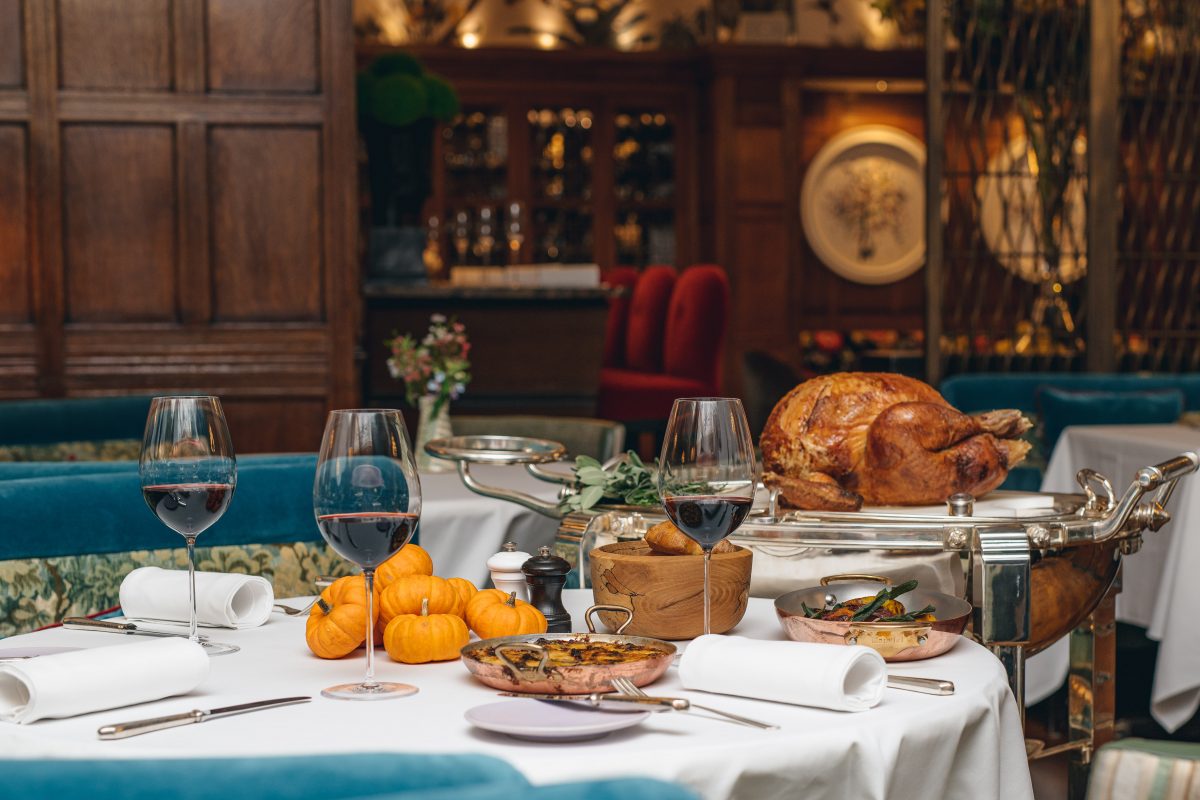 What: Brown’s Hotel is pulling out all the stops for an unforgettable Thanksgiving celebration in London this year. To kick things off, the hotel is inviting you to stop by the American-themed party at Donovan Bar where there will be tipples such as Cider Sidecars made with whiskey, Sassy Cidre Brut syrup and bitters to be enjoyed to the sound of an American Swing Band.

The Lowdown: Once you’re feeling suitably peckish, head across the hall to Charlie’s, the new restaurant at Brown’s Hotel, overseen by Chef Director Adam Byatt and Head Chef Matt Starling. There you will be treated to a Thanksgiving feast available at lunch and dinner. The three-course meal includes a New England style clam chowder for starters, a carved whole roast turkey accompanied by celeriac gratin, roast squash, sweetcorn fritters and bread stuffing with sage for the main and a pumpkin custard tart for dessert. 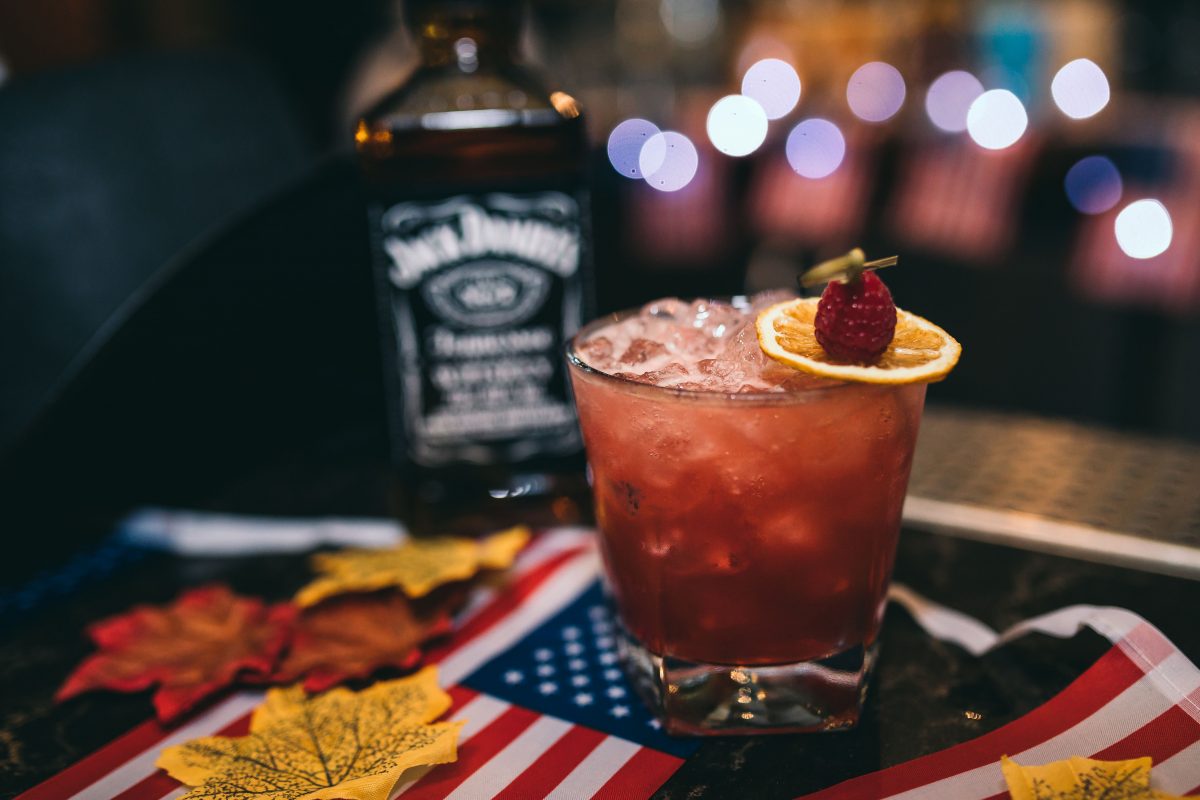 Price: Cocktails are £12 each.  Reserve a table here.

5. For an Indian Thanksgiving: Kanishka 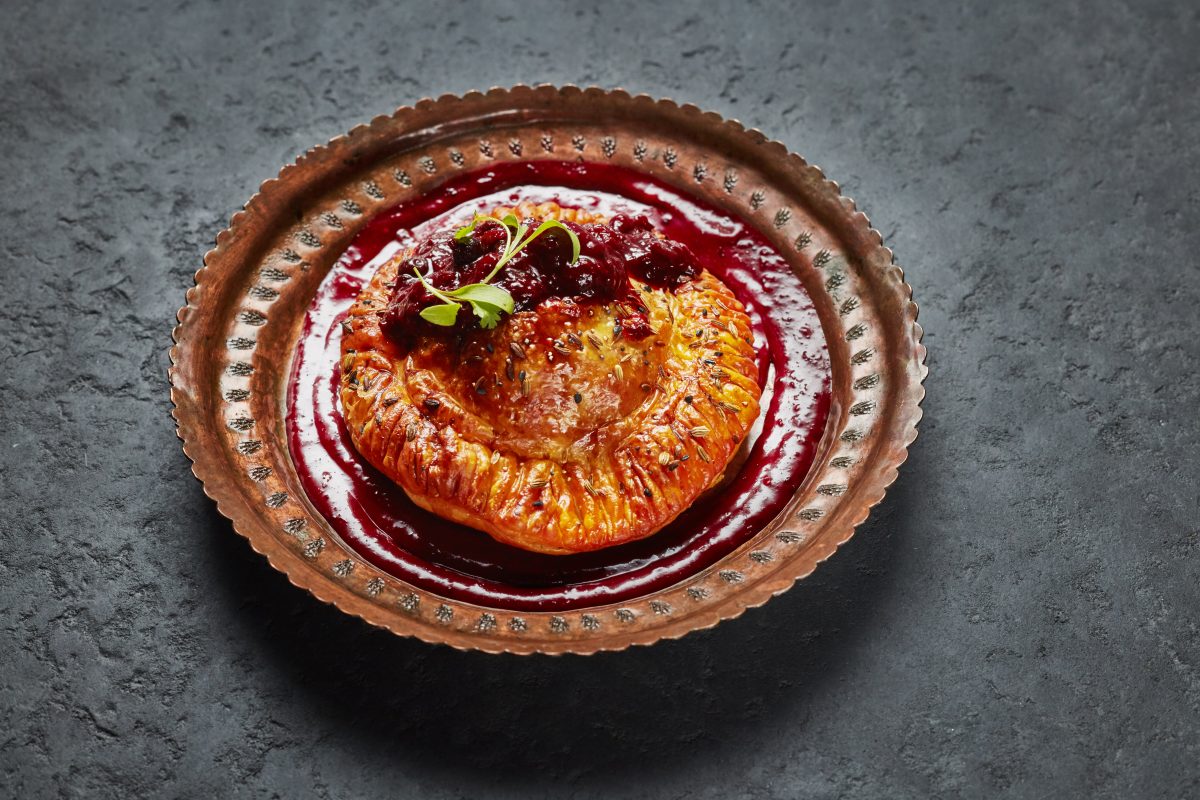 What: Enjoy Thanksgiving with a twist this year at Indian restaurant, Kanishka. Chef Patron Atul Kochhar has taken inspiration from traditional American favourites and added a layer of glorious spice and aroma of his own to create a sumptuous three-course Thanksgiving menu.

The Lowdown: For one night only, Atul will serve his guests Turkey Tikka Pie, a feast of Turkey Tikka encased in a moreish, crispy puff pastry served with a tart and fragrant cumin-scented berry compote. Then, guests can tuck into Jungali Titar, a dish of roasted pheasant, fig, Jerusalem artichokes and Tripura masala sauce. To finish off there will be a Chocolate Sphere made with Valrhona dark chocolate sphere, rich and light chocolate mousse, passion fruit and to top it all off, a salted caramel sauce. A complimentary cocktail will star alongside the meal: The Pecan and Toffee Sour with pecan infused Dead Man’s Fingers spiced rum, Aber Fells toffee liqueur, balanced with lemon juice and made richer with egg white.

Price: All three courses including the Pecan and Toffee Sour are £55 per person. Book here.

6. For a Sumptuous Thanksgiving: Red Rooster, The Curtain 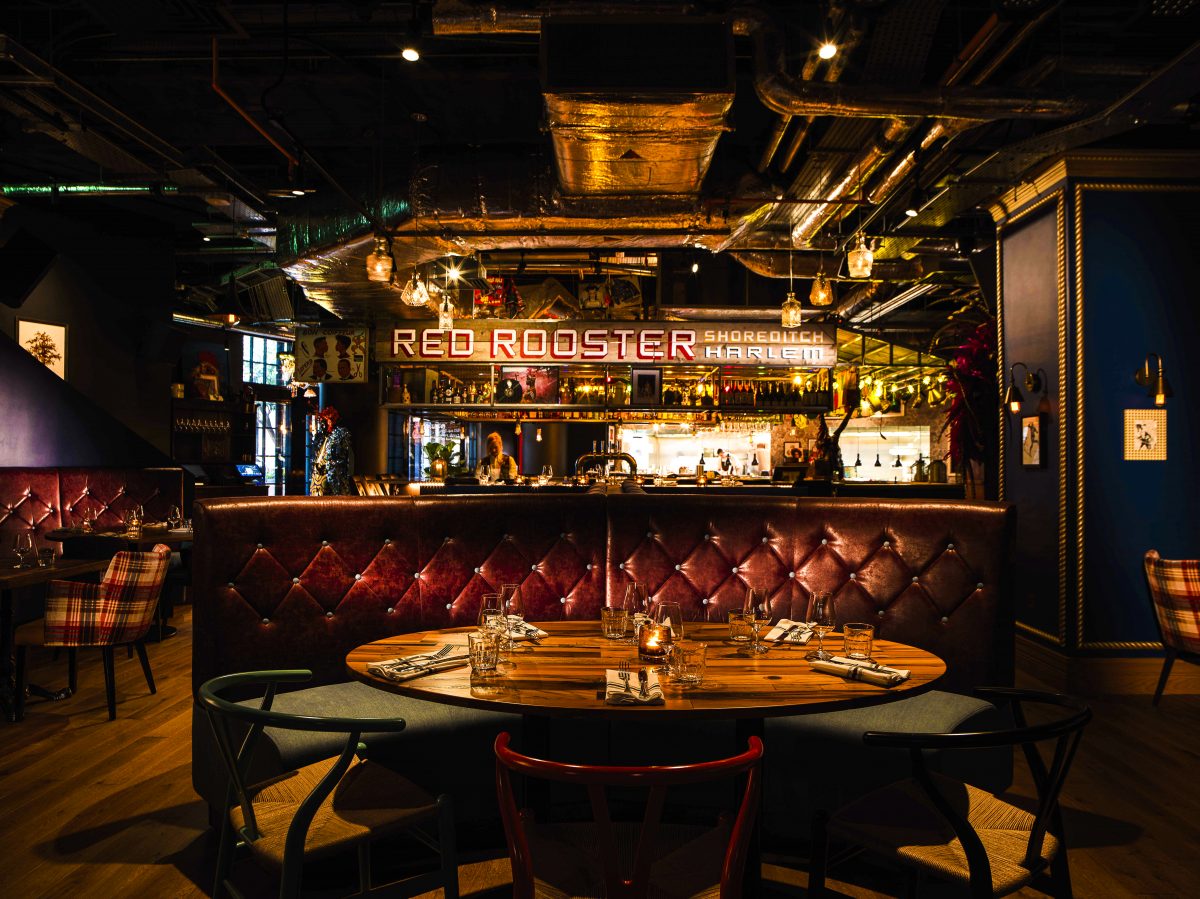 What: Red Rooster, the first-ever international outpost of the Harlem-based soul food restaurant is hosting an unforgettable Thanksgiving right here in London, complete with a special ‘Thanksgiving Feast’ menu to boot.

Price: The ‘Thanksgiving Feast’ menu is priced at £55 per person for three courses. It includes a complimentary pumpkin spice espresso martini and will be available on Thanksgiving (28th November). Book your table here. 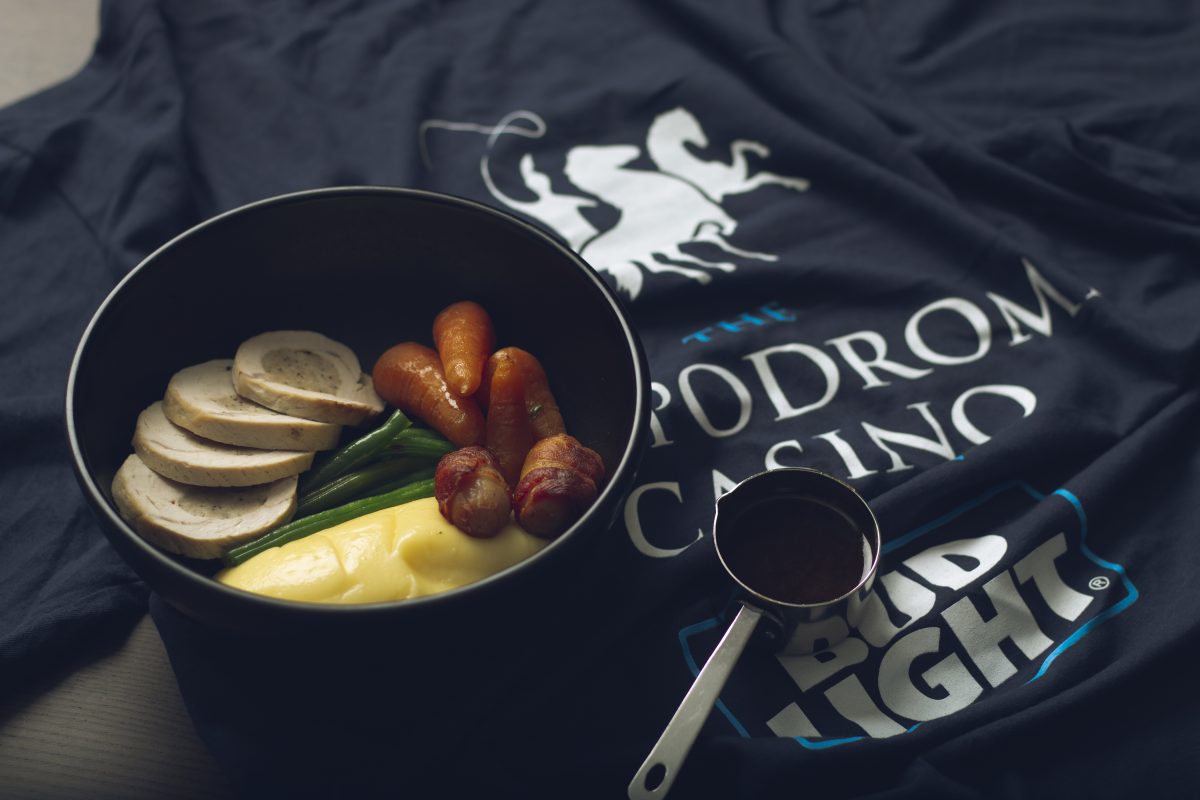 The Lowdown: For one day only, guests can indulge in a Thanksgiving dish of rolled and stuffed turkey breast, glazed carrots, green beans, mashed potato, pigs in blankets and gravy. For convenience, the dish will be served in bowls so guests can enjoy the main event – three back-to-back American Football games shown on a huge screen in the casino’s luxury sports lounge, Lola’s Bar.

8. For a Thanksgiving that Gives Back: Sea Containers London ‘Giving Thanks’ with The Felix Project 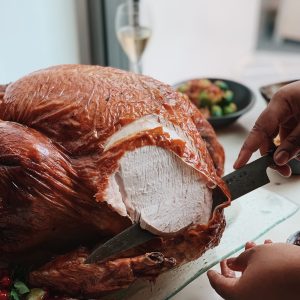 The Lowdown: This year, Sea Containers will be supporting the charity by volunteering at its various outlets behind the scenes as well as hosting two events at Sea Containers London and Sea Containers Restaurant that guests can get involved with. The Sea Containers Restaurant will be offering a special three-course Thanksgiving meal which includes butternut squash, manchego, chestnut and chorizo salad; roast bronze turkey, apricot stuffing with all the trimmings and a delicious Pecan & Apple Pie. If you want to make the most of the Thanksgiving period, you can book the ‘Thanksgiving on the Thames’ package available between Thursday 26th September and Monday 2nd December and enjoy 30% off the flexible room rates and a buffet breakfast at Sea Containers London while also giving back.