Standing at a central London train station, being told to act normal, I feel I’ve been thrown into a spy thriller. The more I’m told to act innocent, the guiltier I feel, like when you walk through airport security and immediately feel a pressure to look inconspicuous. The city becomes a film set as dramatic music pulses in my ears and the binaural technology of the Wiretapper app pushes me along the street to a new location. The countdown of the traffic light joins in, adding pressure.

For an hour we are extras in a film in this immersive audio experience. You look around to spot the other audience members, or are they actors? You begin to suspect everyone. A stranger sits next to me and asks me what’s going on when he notices something odd. I forget the rule about not talking to anyone. Is he in on it? I’m told to follow someone out of the location as the man asks another question.

Wiretapper cleverly moves us through the city, blending reality and fiction as we catch visual glimpses of the story we are hearing. It begins so strongly with the soundscape creating the idea that we are being watched, but as we begin to spot the actors the illusion breaks a little. For something with such emphasis on secrecy and blending in naturally, the actors are not inconspicuous at all in their bold, colourful costumes. Some of what we hear is meant to be the actors speaking live but they don’t mime in time, so if you’re too close it seems less real.

When it’s over I talk to two other audience members. They say this is the year when they say yes to everything, to new and weird experiences, and this is one of those. They loved it. They say that in a world where we live our lives through our smartphones, this hour of confusion is welcome chaos.

The novelty of handing over our control and following strange directions is fun, but the story Wiretapper creates is not coherent enough to create neither a sense of completion nor a cliffhanger. It attempts to do too much and the narrative loses us. Though the binaural technology is impressive, it doesn’t quite hold together. But as the movie wraps up and we carry on with everyday life, I begin to notice how much everyone looks like extras in a movie. 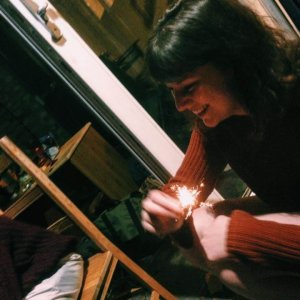