The spa break hadn’t delivered all the brochure had promised, Evelyn thought as she woke on the penultimate day of her trip.

From the too-hard bed which never held her tight enough as she slept, to the long hours of solitude which gave her just enough time to unpack everything she hated about her life.

Four days ago, she’d dismissed how many months it would take to pay off this detox to the south of France, and just bought it spontaneously. Quickly throwing her sandals, clothes and toiletries into her Lululemon travel bag, she thought after the work year she’d had, she deserved it.

The flight was filled with ambitious thoughts of reviving her blog but, suddenly on her own and encouraged by white wine, she only entertained old internal doubts. The low point was the second day spent scrolling her ex Toby’s Insta page, painted with pics of his lithe long-term girlfriend.

The tidy pile of self-help guides lay unread, while her smartphone glowed hot in her hand with over use. The books now mocked her from the plush window desk. Taking one book for her week away was ambitious, three now just looked dead weight.

Her sole pleasure so far had been yesterday at 6am when she woke and blearily watched the surfers on the beach below from her bed. Her eye was drawn to the tallest and most skilled, his white board flicking along the waves like a feather, staying upright against the sea much longer than the rest.

Evelyn sat up against her pillow to watch him pad back up the beach in the early sun, dragging his board and pushing a hand through his salty, dark hair. He’d strip his wet suit down to his waist and, even from this far away, she could see his hulking shoulders and carved body which sucked tightly down into a neat V-shape, ending in knots of raw, fibrous muscle above his groin. 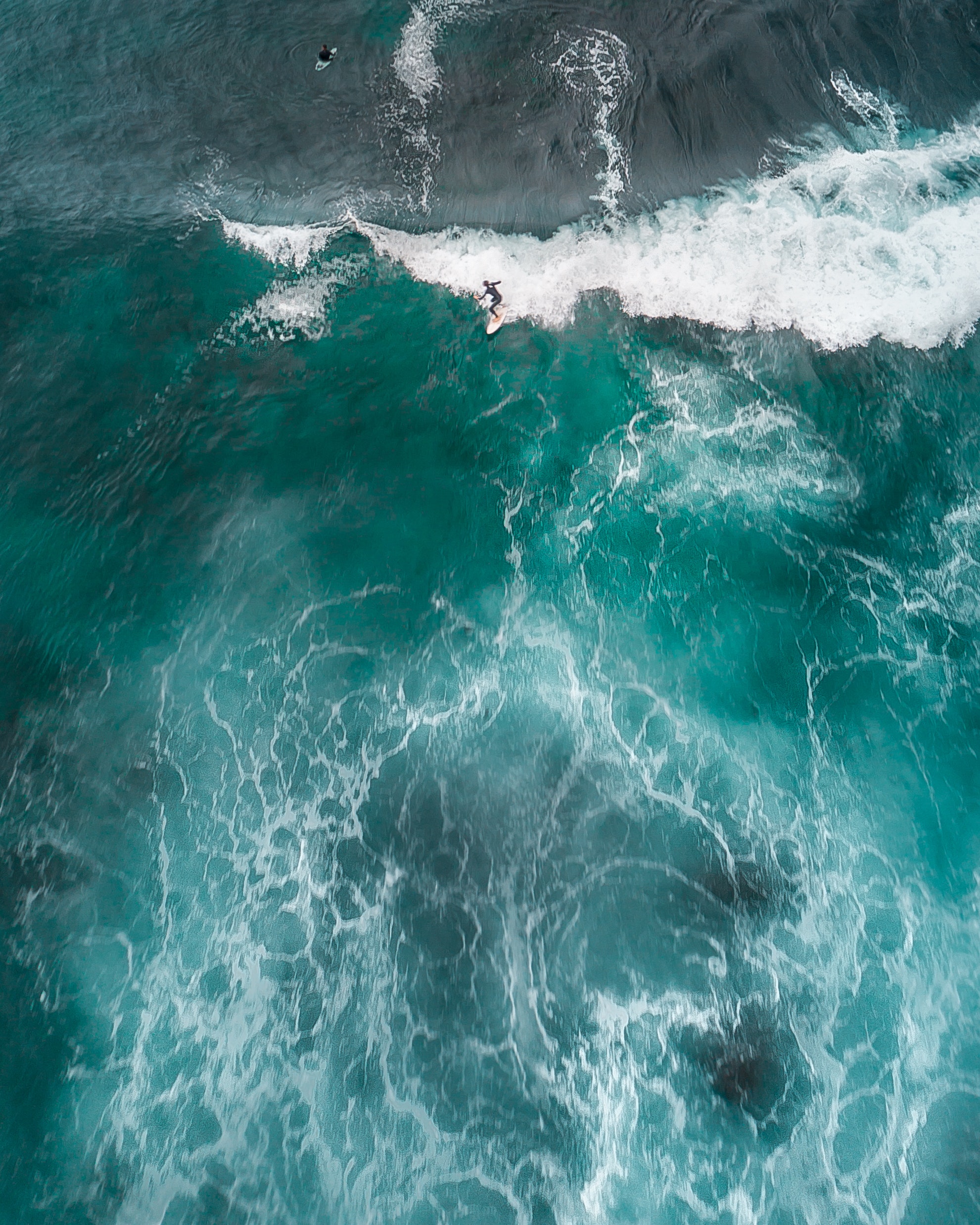 She found her fingertips glide down her neck as she watched him, her hips twisting under the covers. Her blood felt lava thick as her legs unfurled beneath her, her hand unconsciously rushing downwards towards hot, wet lace.

It had been months since she’d gripped someone on top of her, pinned down by hungry power. All those lunches of denial and three nights a week at body pump and the only one who ever appreciated her hard, trained body was the mirror.

She felt denied even the cliche of a holiday fling. Her one venture into the sleepy town offered only old men playing games of dice and, inside the spa complex, there wasn’t even a pool boy to flirt with, all the staff being manicured, lip-glossed beauticians. Disappointingly, every name badge introduced only Katie, Lucy or Bethany.

That evening she felt how big and empty her luxurious bed was as the sun dipped behind the horizon. She tried again restlessly to get into one of her self help bibles.

The bed side table phone angrily interrupted. Reaching for the chunky plastic, a voice replied, “Miss Harper, this is just your reminder for your 8pm deep tissue massage”

Fuck, forgot about that, she thought.

She swung on her fluffy robe and padded down the wide hallway in kitten soft slippers, enjoying the sensation of the fluff edging between her toes. The lift pinged and she watched the numbers dial down to the basement floor where the massage room was booked.

Travelling the hotel corridors of dark wood and veined white marble and past large oak bowls of luminous citrus fruits. When she got to the massage room, she saw no-one was there and doubled back to grab a shiny orange –

“Oh man, sorry!” Evelyn heard as she walked straight into someone coming the other way.

She looked to where the bass deep voice had come from and her eyes scanned up a six foot wall of sun-kissed muscle. Dark wavy hair on top, salty looking.

“I’m Adam,” the voice introduced. Evelyn now took in Adam adjusting the sleeves of his shirt, which struggled unfairly under the strain of well-worked biceps. “You must be my eight o’clock?”

Evelyn suddenly brought to mind the sea and sandy wetsuits dropping to the floor at the beach. The surfer.

Underneath her robe, Evelyn remembered she wore nothing but satin pink panties that cut daringly across the top of her buttocks. At the realisation of this, her body rode a shiver and, somewhere in the deep heart of that satin, electricity flickered. Heat rushed up to her face which – make-up free – showed every blush.

“Sorry I’m not sure if you were expecting a male masseur, but our receptionist called in sick today and the bookings have been a mess” said Adam, perfect English with a gloss of French allure.

“Do you want to get settled in and I’ll be there in a minute,” he said, voice warm and caramel thick.

Evelyn padded self-consciously towards the small, candlelit massage room, slipped her robe on to the peg and steadied herself as her pulse raced. Nearly naked now, her skin prickled against the air and the aroma of white linen filled her nostrils.

A knock on the door. She opened it a crack to peeped out.

“You forgot your towel,” said a voice from the dark corridor.

She peered her head around the door and gently tossed her reddish brown her off her shoulder, letting it roll softly across her collarbones. A left hand came out of the dark with a white towel. No wedding ring, she noticed.

Her fingertips strayed along her skin as she tucked the large towel on to her waist. The weight of it pulling on her underwear, causing the satin to part from intimate skin, triggering a molten shift in her sex.

Composing herself, she lowered her body on the massage table and felt the towelling cotton against her breasts. As she dropped her head gently into the hole at the top of the table and relaxed, the door swung open and she felt a figure enter the room and move around. The clicks of bottles, the shuffling of feet. She lay still.

She felt him reach the head of the table. She lifted her body up to rest herself on her elbows so she could look and take in his face, all hard cheekbones and shaved stubble. She realised she hadn’t said anything, “So…has today been a good day?’ she managed.

“Yeah, long. I was up really early,” he said, keeping his hazel eyes on hers, avoiding the promise of her breasts which barely concealed themselves against the surface of the table.

Evelyn immediately recalled him that morning down on the sand. Prickles of heat prickled across neck and shoulders. She realised he’d carried on talking about work pressures and appointments but she’d barely heard a word.

With what she hoped was an artful sweep, she moved her hair out of her face and settled down to look through the hole in the table. She could see his brown feet move around the bed in white sliders.

She saw the feet approach the table and heard the oil slick between his hands. She became aware how naked her body was, the towel covering only the tanned expanse between her knees and hips.

Her neck arced and her body waited for his touch. 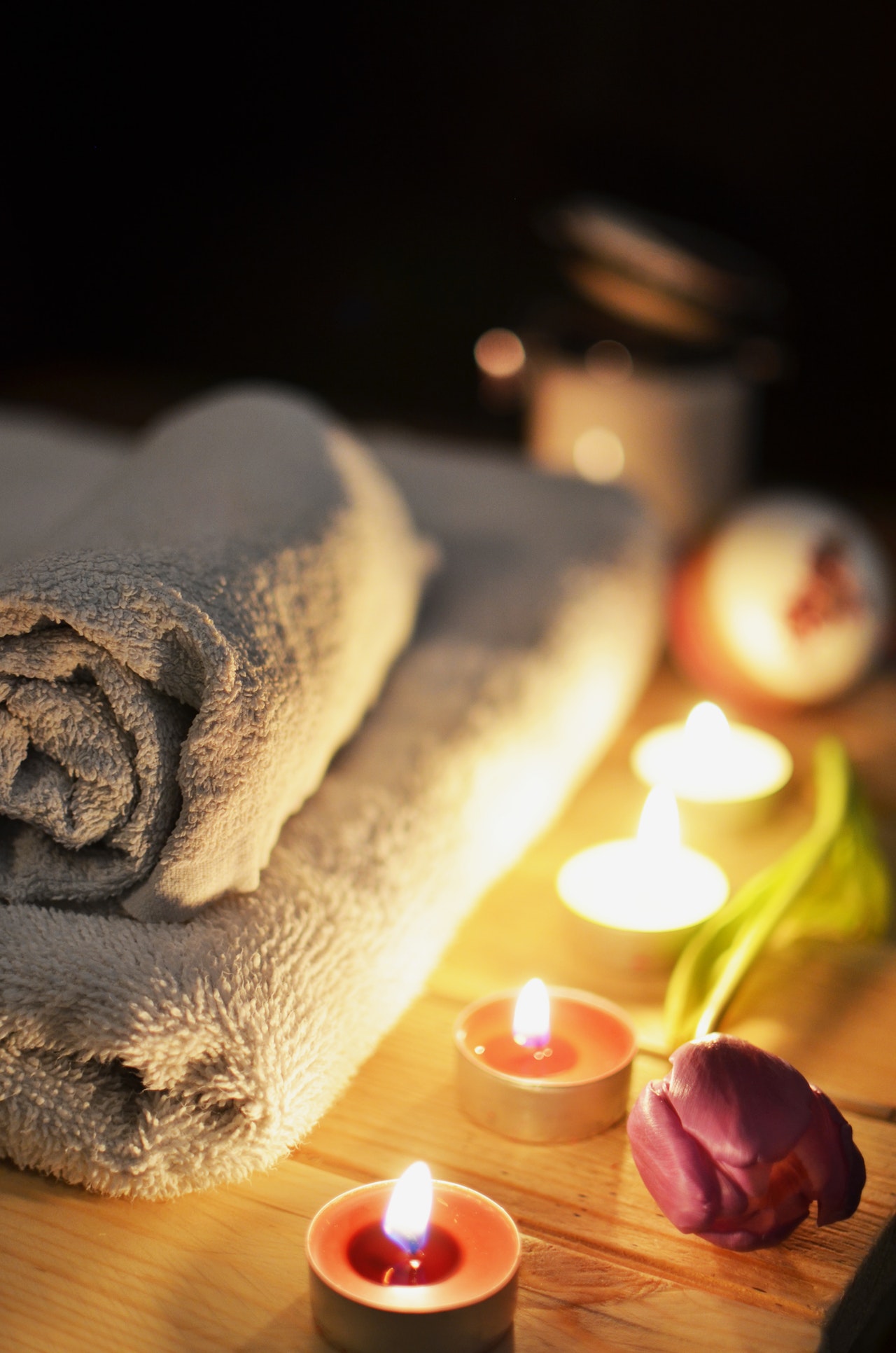 Hot, oiled hands shattered the tension on her skin, pushing her body down into the table. She gasped as she felt his knuckles mesh with her bare shoulders and grip slightly – snapping the sexual tension on her skin and sending it dancing down her spine and on to her legs. Her toes curled hard against themselves.

As he began his work, a soft fuzz hummed beneath her skin. She felt her blood pool and boil in her hips. His conversation now just white noise, drifting lazily along above her head like afternoon clouds. She moved her hips hard against the table to match his pressure, her rib cage lifting, allowing her to feel the softness of the towel kiss lightly against her breasts.

The air changed and she was suddenly aware she being asked a question.

“I said, you spend a lot of time sat down, don’t you?” came the voice.

“Yes, busy hours, busier boss,” she managed, snapping back into work mode. Her lower back was tightly wrapped ropes of angst, fused together from the hours sat in a desk job she hated.

Looking down, she saw his feet move as he adjusted his weight to reach for more oil.

His hands glowed hot as they enveloped her hips and she suppressed a moan. His warm palms easing apart the knots as if pulling apart warm bread.

Her hips involuntarily rose up and met the flats of his hands, her pelvic bone meeting harder the table and pushing downwards. As she pushed down, her panties tightly framed her sex. Her skin burned and her muscles became liquid. She became aware now how – with every muscular push of his hands on her lower back – the satin of her underwear pulled against her wetness, her core now a soft ball of melted wax.

The soft tone of his voice rolled on ahead, washing over her. Her body swam as her toes hooked hard on the end of the table, pulling her body tighter against the hard surface.

Her stomach muscles bucked and tightened, her knees bowed inwards and she felt her legs tremble. God, not here, she thought, imploring her body to keep the door shut on the hot, rising tide.

She pressed her mouth hard against the rim of the massage table. She felt spit fleck up on her lip as she held on against the pleasure rippling through her core.

The voice then broke through the clouds.

“So yeah, I’ve been working here that long really, never wanted to leave,” it said, almost as if coming from another room. “I love the surf so much, why would I go anywhere else?”

She was aware he’d now moved away and was wiping down his hands on a towel. Evelyn, self conscious now the massage had finished, sat upright in embarrassment, just about sweeping up the towel to cover her naked breasts.

“You surf?” she said composing herself. “How interesting….”

“Yeah,” he said smiling, almost like he knew what had been going on under the towel all along. “Have you tried?”

“Oh yeah, a little,” she lied. “I might come down tomorrow and check you out before I leave.”

Maybe, she thought, this spa break wouldn’t be a waste of time after all. 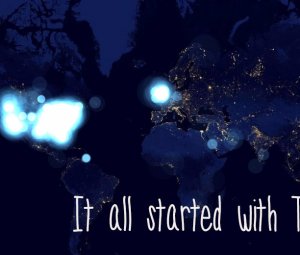 About Time: You Supported #YesAllWomen

About Time: The Ultimate Guide To Going Back To Work Part II

About Time: The Ultimate Guide To Going Back To Work Part I

Ask An Expert: 6 Nourishing Ways to Spend your Lunch Break