BOL are on a mission: to make it easy for you busy folk to eat more plants, especially when you don’t have the time to cook from scratch. Founded in 2015 by Paul Brown, BOL are a food company which specialises in healthy vegan and veggie meals that are are natural, nutritious and most of all, delicious. We chatted to Paul about sustainability, the rise of veganism and growing the BOL team:

You first tried a career in snowboarding before launching a career in the food industry – what made you switch lanes? 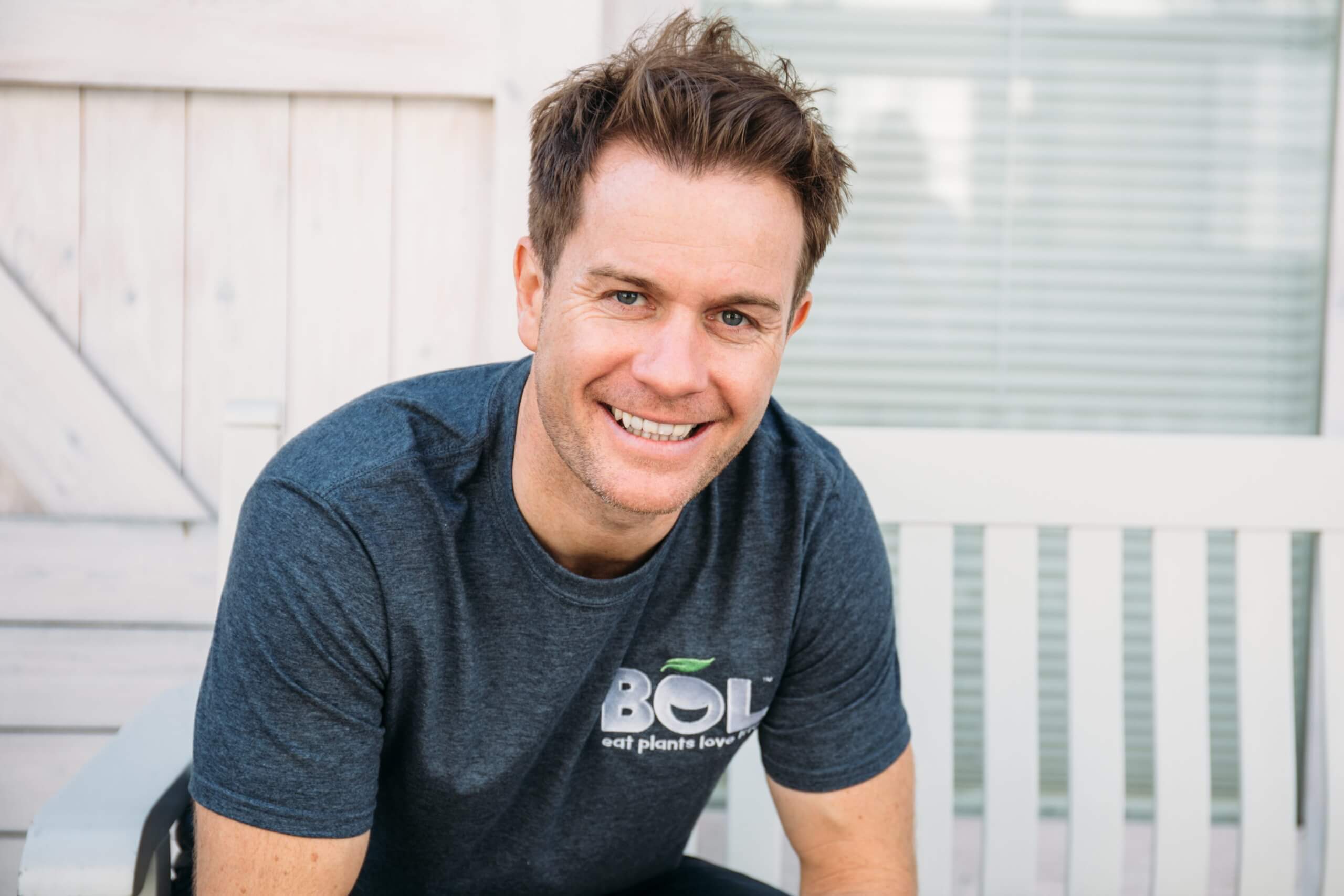 Snowboarding was just one of my sporting ambitions. As a young boy from Manchester with two brothers, being a footballer was a childhood dream. When being a footballer proved unlikely I tried rugby, when that didn’t go to plan I tried snowboarding. The snowboarding career came to an abrupt halt when I was seriously injured in the Californian slopes. I spent my Californian recovery time exploring the culture and took a real interest in the healthy fast food trend that filled the streets; it was something I’d never seen in the UK. I harboured the dream to open a healthy Mexican joint upon my return home.

Life took a turn when I met the innocent founders. I was their first “real” employee (neither an existing friend or family). I would have never guessed that I’d be at innocent for 14 years. Food runs in my family, but I never expected to be running a food business like BOL.

How did the idea for BOL first come about? 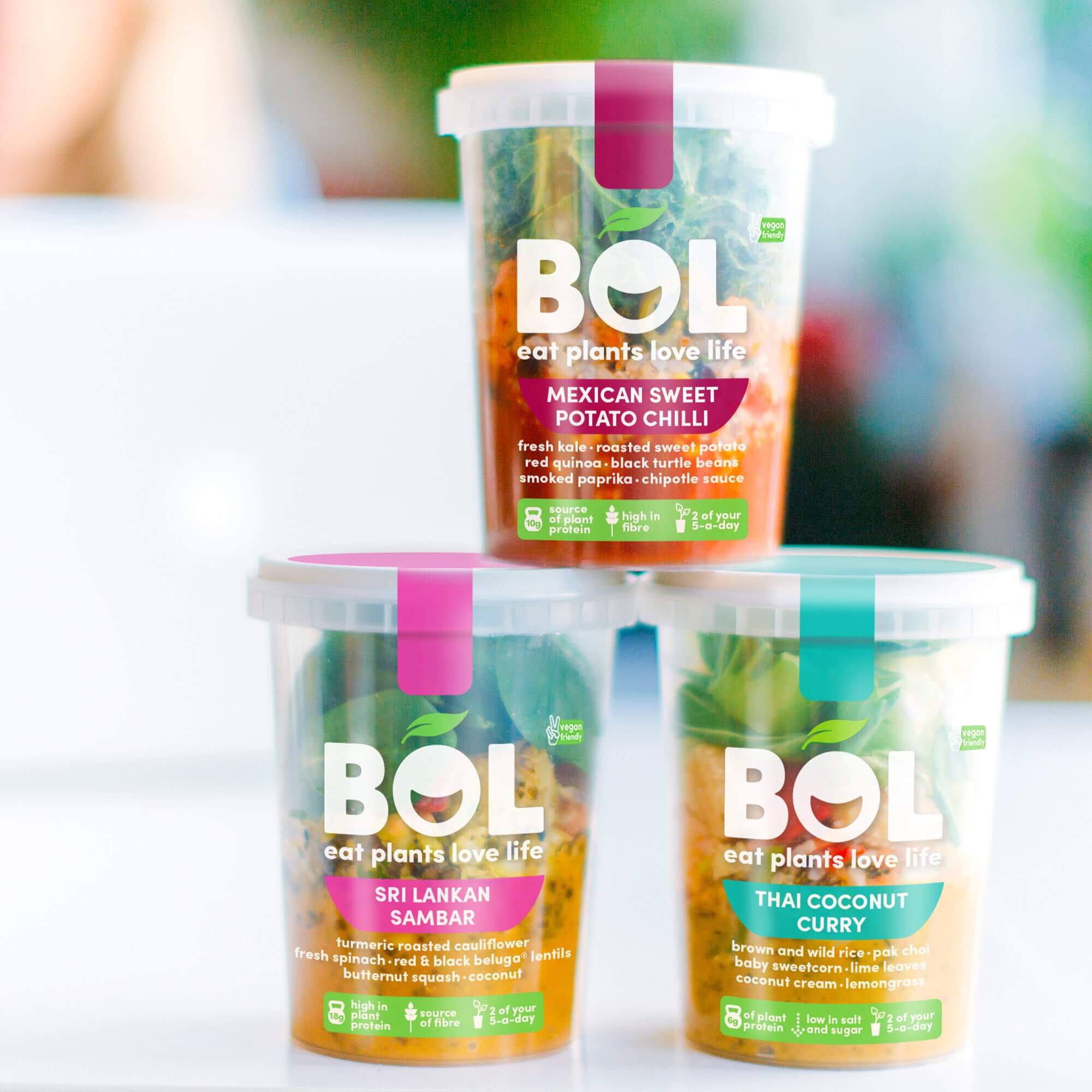 When I was at innocent I was part of the team that came up with the Veg Pot concept: a little pot of goodness for busy people who didn’t want to compromise on taste, health or quality. When Coca Cola acquired innocent it quickly became apparent that I was looking after a part of the business that was not strategically significant: it was time to move on. It was at this moment that – with the blessing of the innocent board and financial backing from the founders – I took the best bits of innocent food and started BOL in 2015.

How has the journey been from the initial idea to having BOL stocked in supermarkets nationwide?

In a word, tough. For a start-up it’s always difficult to convince supermarkets (and in fact any shop) to stock an unknown brand because they only have finite space in a hugely competitive market. Thankfully, with my 14 years of experience at innocent and the incredible work of the founding BOL team, we were able to convince a handful of them to give us a shot.

BOL is now 100% plant-based – what made you ditch the meat and dairy? 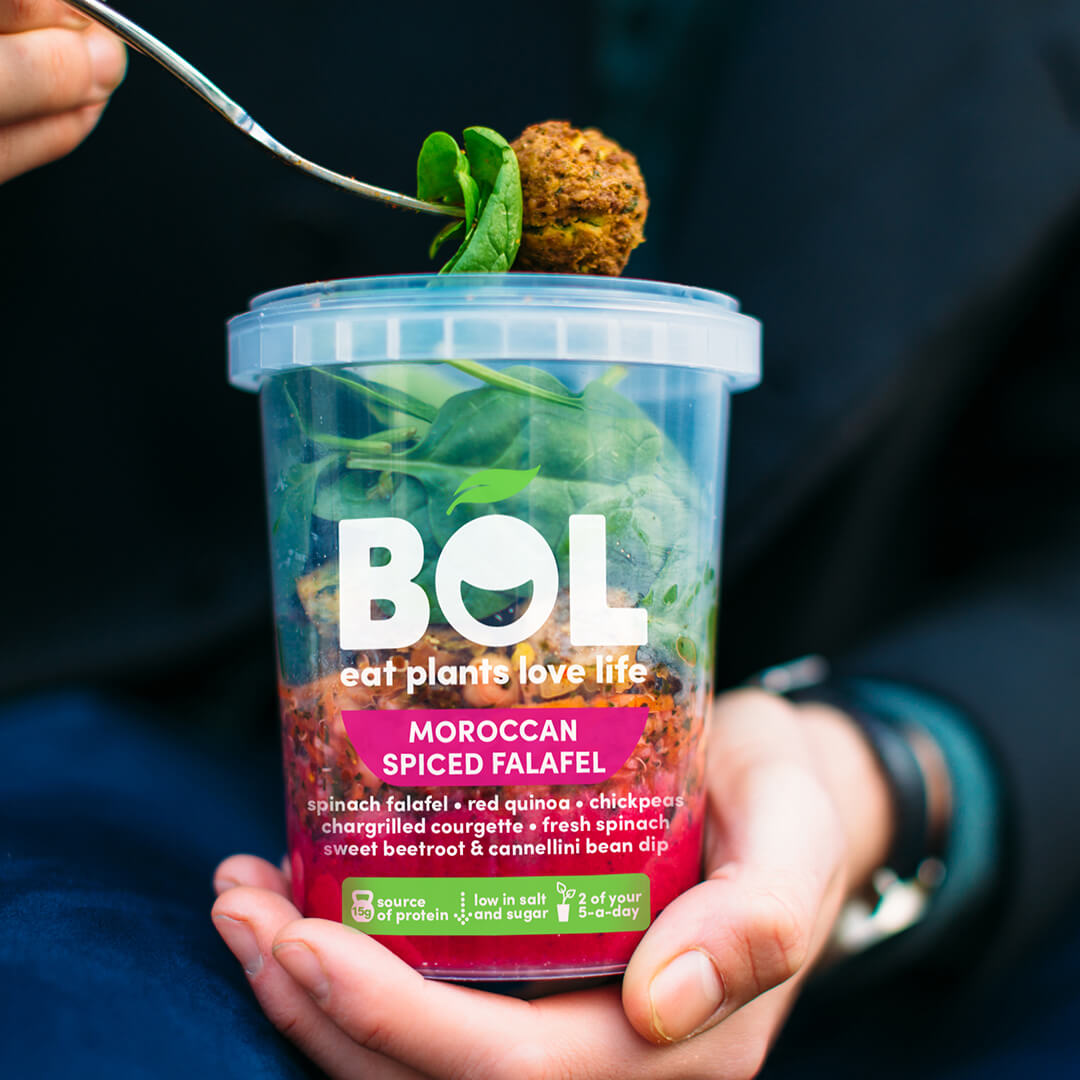 I frequently talk about my “cowspiracy epiphany.” As the founder of BOL I got closer and closer to the production process and realised that every food choice we make is in fact the biggest environmental decision we face every day. My purpose changed overnight: this realisation led me to see that I had a real opportunity to be part of the solution and not the problem.

The stats never cease to amaze me: producing one hamburger takes the equivalent amount of water as showering non-stop for two months (660 gallons). This led us to drop all meat and fish in the summer of 2017. Since then, we’ve committed to do everything we can to make strategic decisions that are kinder to the planet and better for us humans. Dropping dairy from our range is the big next step scheduled for July of this year. We’re absolutely not perfect, but this will not stop us from trying to improve every day.

Can you tell us a little bit more about the collaboration with eco chef, Tom Hunt? 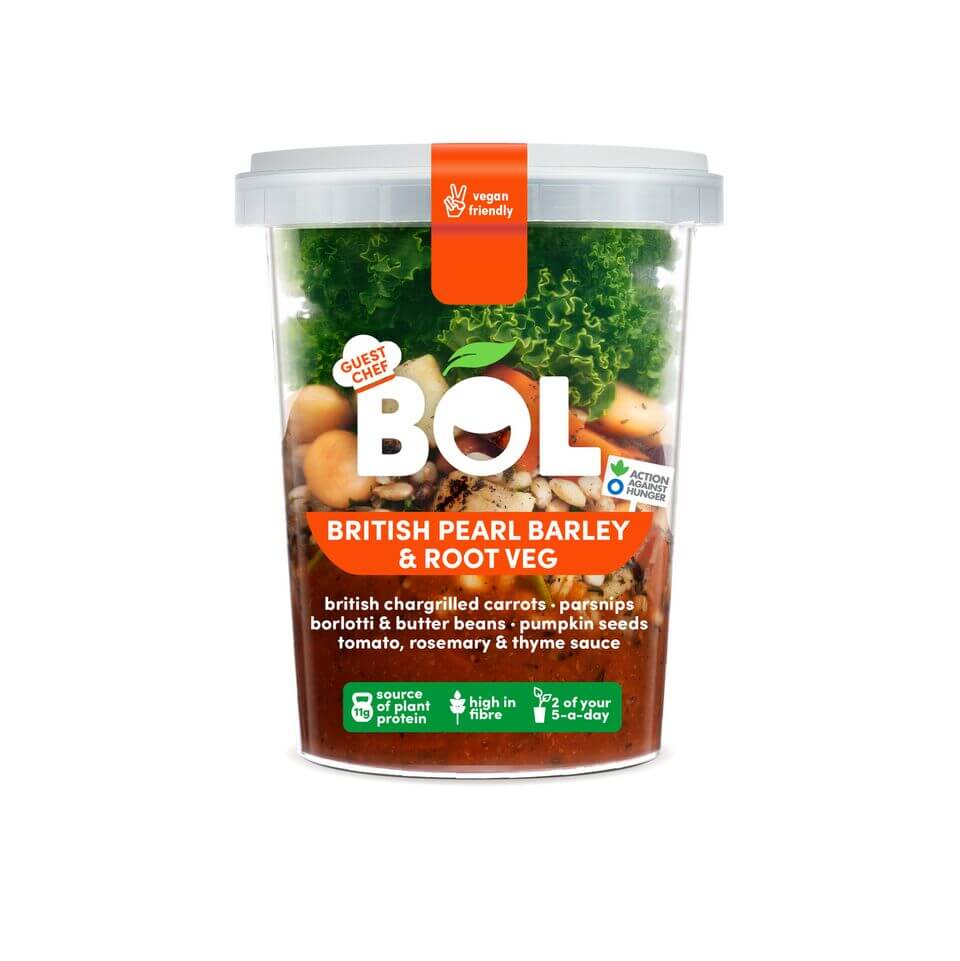 We first met eco-chef Tom Hunt through our partner charity, Action Against Hunger. Tom is a long-time supporter of the charity and a brilliant food sustainability advocate. When we hatched the idea of creating a limited-edition pot to benefit the charity it seemed only natural to have Tom create the recipe. We’ve used wonky veg and British pearl barley in the pot – a great nod to our common sustainability efforts. We hope this delicious pot helps Action Against Hunger in their mission of ensuring every child has access to the nutrition they need.

What simple changes can consumers make to help the planet?

Every meal offers an opportunity for us to make an impact. We don’t expect people to radically change their diets, but we do ask that they give this plant-based thing a go. It’s better for us and kinder to the planet. We embrace the reducitarian and flexitarians, every mass movement starts with a gradual transition and an increase in awareness.

We are also very passionate about the power that consumers have to reduce waste. We’ve championed this through upcycling: a real opportunity to see packaging as an opportunity rather than a burden. At BOL we invest in high-quality containers that are fully recyclable, up-cyclable and re-usable. We have showcased these efforts through our #dontwastecreate initiative. Since launch, we’ve seen people transform our pots into kitchen organisers, plant vases, overnight oats containers and many more creative ideas.

How long does it take you to create and test new products/dishes?

As a small start-up, you can never plan a launch in a linear fashion: new ideas and new challenges always pop up. However, generally speaking, launching a new product can take anywhere between 3 and 6 months from conception to launch.

What’s it been like growing your team? How do you get your employees to believe in the BOL vision? 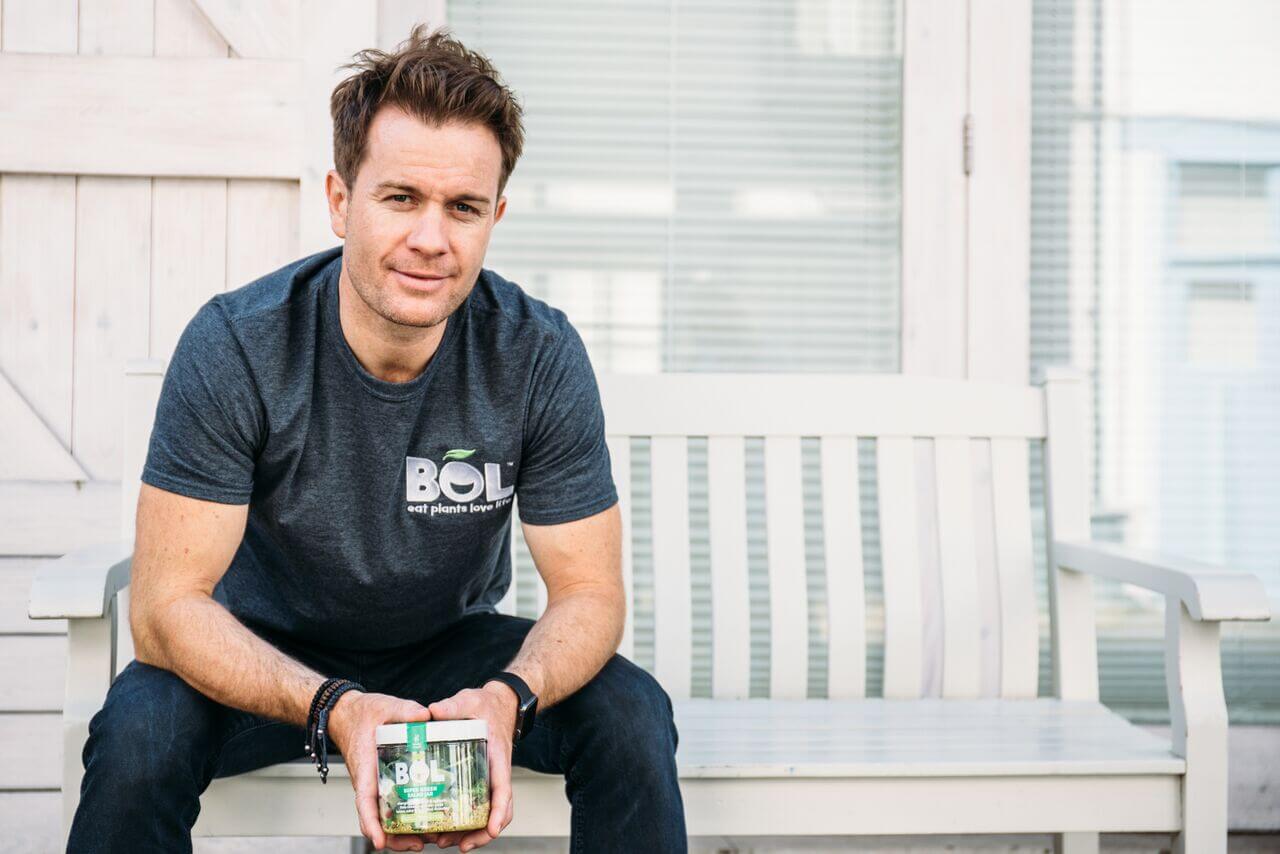 Growing the team is the most enjoyable part of being an entrepreneur. Everyone at BOL has a strong belief that business can be a force for good and that we have an incredible opportunity with BOL to create a brand we’re truly proud of. Whilst I’m a big believer in diversity on all levels – including thinking – it’s mandatory for me that anyone who joins has the right attitude and the determination to knock down walls for what we believe in. Being disruptive is actively encouraged at BOL, the status quo is so boring.

Where would you like to see BOL in five years times?

Our ambition is to inspire the world to eat more plants, so every step is taken with this ambition at heart. We’d definitely like to be playing a prominent role in the on-the-go sector throughout Europe and starting to poke our heads into the Americas. We have some great opportunities that we’re nurturing in France and Ireland and can’t wait to make the big step of going international.

How do you keep a healthy work/life balance?

The cliché saying “do what you like and you’ll never work a day in your life” definitely feels real to me. That’s not to say there aren’t stressful and challenging days, but I wouldn’t have it any other way.

For more information on BOL, see the website here.